Ho Chi Minh City is in the midst of building its first metro line, and planning for at least another 10 lines. Every year I do a “State of the Metro” report to follow the construction progress and other lines under consideration (here are the 2020 and 2021 reports).

Another year has gone by and it has been another year of delays. In fact, the grand plan for the HCMC Metro system has gone backwards in the last year. Line 1 is still the only metro line under construction when there should have been another two (Line 2 and 3A).

Here is an overview of the metro construction progress in Ho Chi Minh City as of July 2022.

Line 1 will link Ben Thanh Market in the city centre to Suoi Tien Station, next to the Mien Dong Bus Station. The length of the line is 19.7 km (2.6 km underground and 17.1 km elevated), and there are 3 underground stations and 11 elevated stations.

Line 1 continues to face delays with another year added to the completion date. In September 2021 it was announced that the new completion date would be late 2023 or early 2024. The end of 2023 was confirmed again in April 2022.

August 28th will mark the 10th anniversary since authorities broke ground for construction. It was estimated that Metro Line 1 would become operational in 2017. The project has gone from an estimated 5 years to complete to probably 11 years. 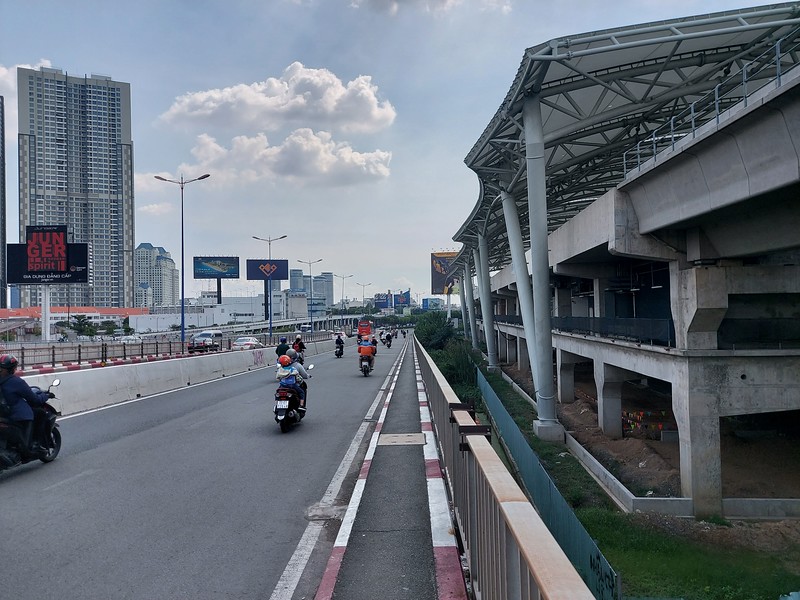 While the delays have been disappointing, the city has been drip-fed glimmers of hope throughout the year with the site of the trains being delivered from Japan. Each delivery to the District 4 dock was reported in the news, where they were taken by road to the depot in the dead of the night. 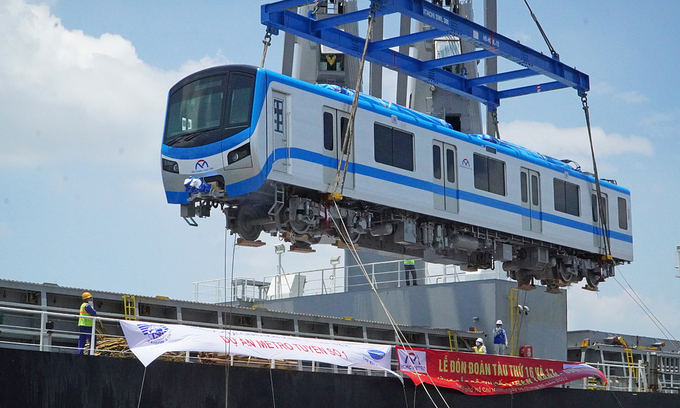 [A metro train from Japan arrives at HCMC’s Khanh Hoi Port on May 6, 2022. Photo by VnExpress/Gia Minh.]

The latest estimate for test runs is for the end of 2022.

The return of Le Loi 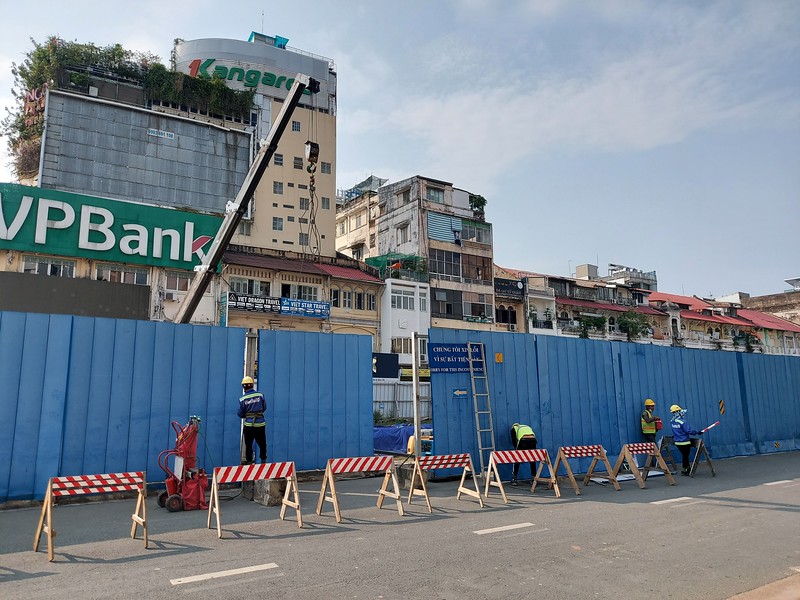 [The blue construction fences of Le Loi being prepared for removal.]

For residents of Ho Chi Minh City, this project feels like it has been going on forever because one of the main streets of the city centre has been boarded up with blue construction fences for years. Le Loi is the street that runs between the central market and the opera house, so it is a high-profile street. The Opera House station and the underground section between Opera and Ben Thanh are finished, so the work site is now being cleared on Le Loi.

Originally there was a plan to build an underground plaza from Ben Thanh to the Opera House. An investor for this project wasn’t found, so the excavation site has just been filled in.

There was also a plan to landscape Le Loi and turn it into a pedestrian plaza. Le Loi was originally lined with tall trees which had to be cut down to dig the tunnel. A new pedestrian park would have made up for this loss, but it seems that this is not going ahead either.

[Proposed landscaping of Ben Thanh and Le Loi (in the top right corner).]

The road is being restored to its original format of 10 lanes in 4 sections. The thing is that this stretch of road doesn’t need to be so wide, so there could be a park in the middle section while keeping a road on either side.

The brutality of the road restoration is felt at the Opera House end, where there are 10 lanes of searing asphalt. There should be a park in the middle of this. 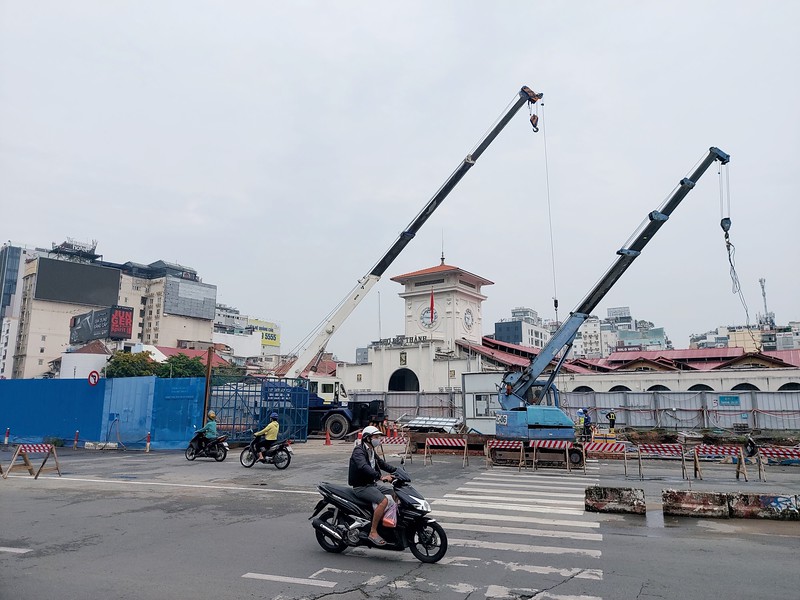 Ben Thanh Station will be the main station of the future HCMC Metro, with three lines interchanging here (Line 1/3A, Line 2, and Line 4). This is one of the biggest metro stations in Southeast Asia, and it might be the first metro system in the world that started with a purpose-built 3-line interchange. The delays of Line 1 have been a distraction, but when this is finished I hope that more attention is given to the significance of this station. 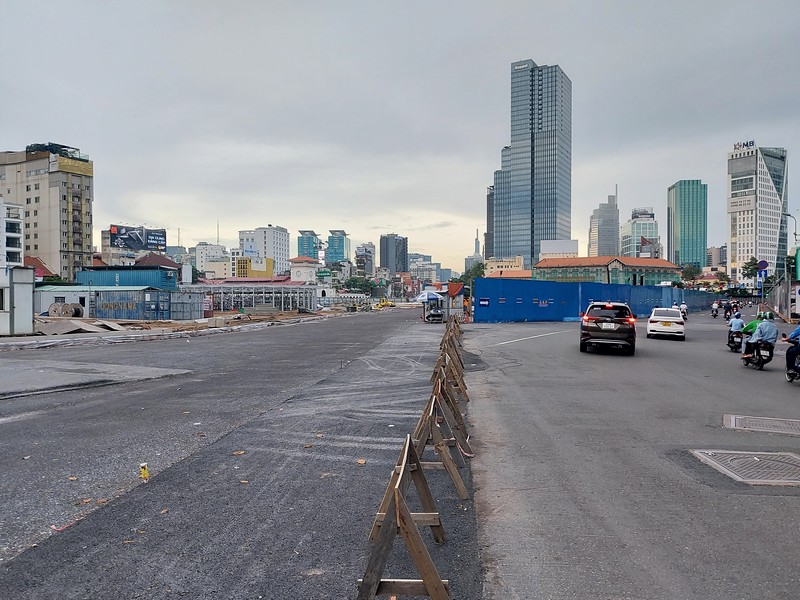 The major construction work has finished at Ben Thanh, so they are now in the process of removing construction material from the work site and relandscaping. They have not provided any updated images of what the landscaped area will look like, so we wait in anticipation to see the final product.

[Ben Thanh metro work site being filled in. The big building is One Central HCM.]

There was a plan a few years ago to landscape the adjoining park, but that seems to have been put on hold as well. I am concerned that they have run out of money for landscaping and that the Ben Thanh area will be paved over like Le Loi.

There have been other problems not related to construction, including theft of construction parts and graffiti vandalism. The stations also have issues with rubbish and graffiti.

The lengthened delay has led to the HCMC metro operator running out of funds in February. More funds were requested in June for the company’s operating costs, with JICA also urging more funding.

Meanwhile, the ticket system that was originally designed in 2010 has become out of date for modern needs, and the developer is looking to upgrade it.

Line 2 was looking promising at my last update in August 2021. Clearance of land for construction was going slow in January 2022, but at that point it was still looking like construction would start in 2022. In march is was estimated that the line would be completed by 2030.

[A remaining house at a Line 2 clearance site.]

In April the consultant that was providing engineering, design and supervision services pulled out after negotiations over a new contract failed. Construction has now been rescheduled to 2025 instead of starting this year.

The Management Authority for Urban Railways (MAUR) has 11 urban railways listed on their site (including metros, trams, and monorails), but no other lines have had any status updates over the last year.

There was a news report in April 2022 that the HCMC Transport Department has proposed adding more metro lines and light rail services to enhance connectivity to ports and airports. It didn’t give any updates about lines that are already planned.

The only new line that has made progress is one that isn’t listed on the MAUR website, and that is the railway to the future new airport.

There have been different proposals over the years to connect the city to the new airport at Long Thanh.

The original plan was to include Long Thanh in the North-South Express Railway. That would start at a new station in Thu Thiem. There was also a separate proposal for another metro line that would connect the current airport to the new airport. I proposed this idea in my HCMC Metro concept map.

The line that has been settled on is for a light rail from Thu Thiem to Long Thanh Airport. This light rail will have a length of 38 kilometres and it is expected to be completed by 2030. It was reported in April that work was set to start, but there has been no specific information about the route or stops on the way, or when exactly it will start construction.

Construction of Long Thanh International Airport finally began in 2022, and the government is now insisting that the airport must be ready for trial operations in early 2025. If this deadline is kept then it will be 5 years before Long Thanh has an airport railway.

The current airport at Tan Son Nhat is only 8km from Ben Thanh, while the new airport is about 30km from Thu Thiem and 38km from Ben Thanh. It will be a hard sell to get people to use Long Thanh if there is no airport railway.