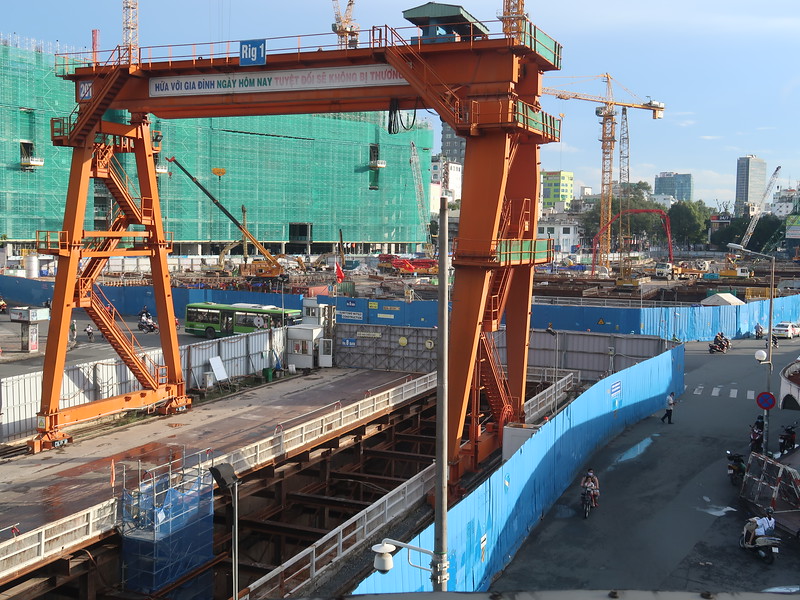 Ho Chi Minh City is in the process of building its first metro line in a planned 9-line urban rail transit system of metro, light rail, and monorails. As part of the Future Southeast Asia annual construction report series, this article refers to developments over the past year.

Here is the 2020 construction update for the approved lines of the Ho Chi Minh City Metro.

The metro authority has given a sneak preview on their Facebook page of what the map of the completed network will look like. 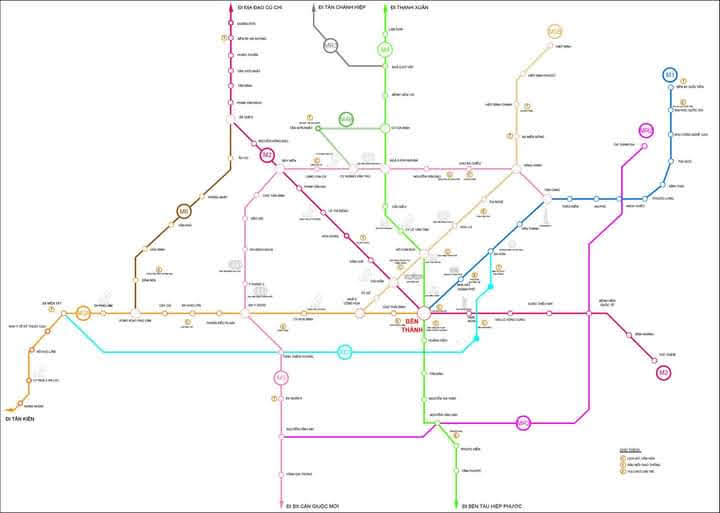 I also made an unofficial map of the HCMC Metro.

The proposed stations have been added to this Google Map.

At the time of this post Line 1 is the only line of the planned network that is under construction. Work officially began in 2012 and the target completion date was for 2017. The estimated completion date is now at the end of 2021. The line was 71% complete in April 2020, and the 2021 target date remains. 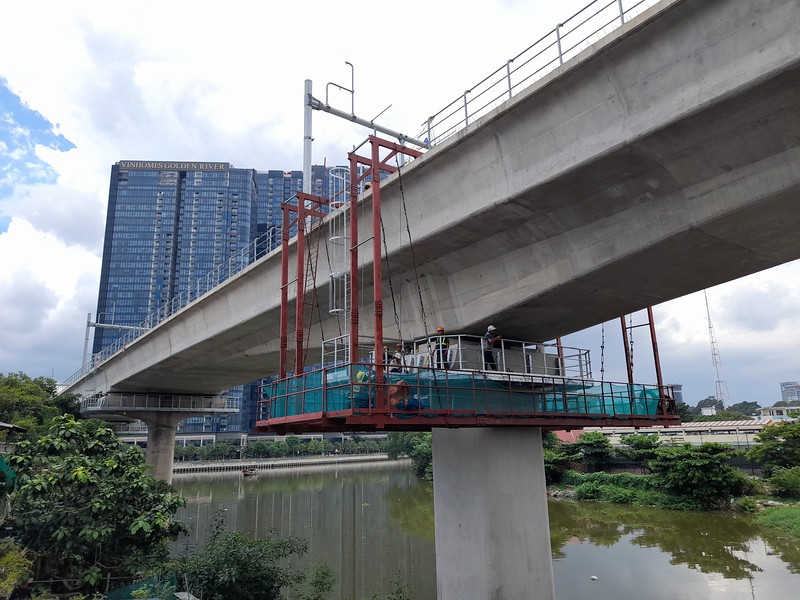 First metro lines are almost always delayed and over budget, and Ho Chi Minh City is no exception. Despite the metro still not being finished, the HCMC Metro is about average when compared with other first metro lines in Asia. 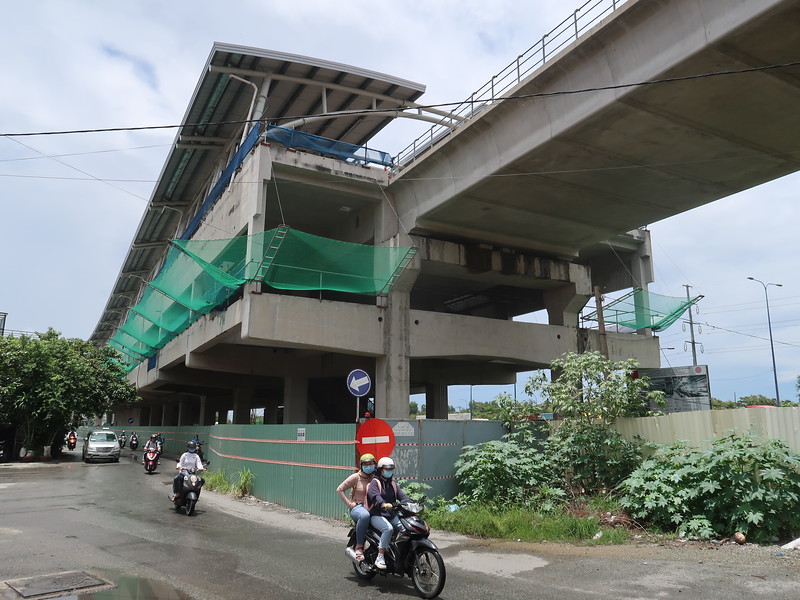 In the previous year there were delays in the approval of increased funding. The COVID-19 pandemic has also caused problems with skilled workers being stranded outside the country. 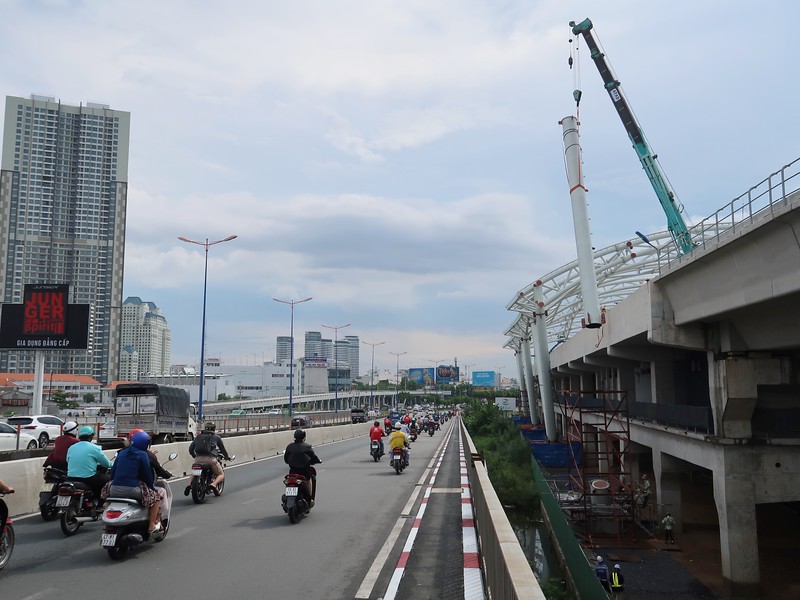 Progress was made on the underground section with the completion of the Opera House station. The work site was removed, and a new square was opened just before Reunification Day on 30 April 2020. The square is now closed while it is landscaped into a new park. 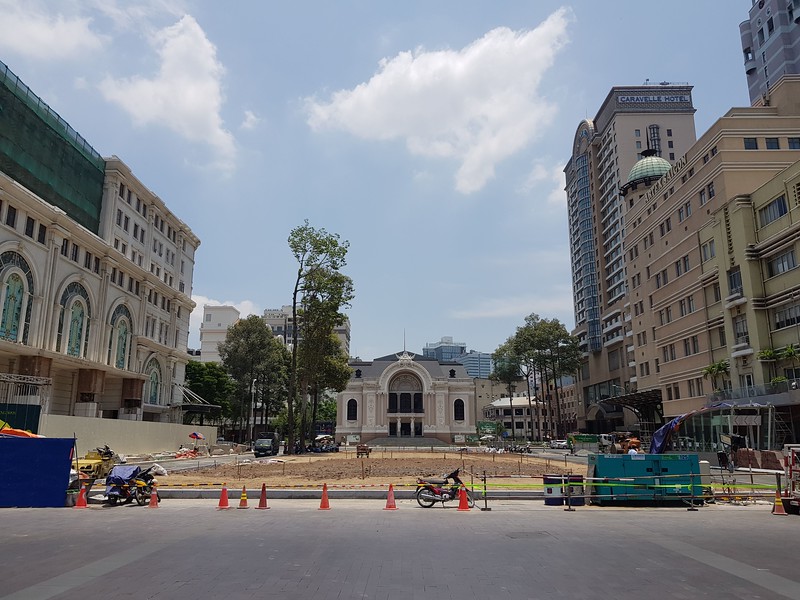 Next to the park is an entrance/exit for the Opera House underground station. This is the first tangible evidence of a metro system under Saigon. Hopefully one day there will be hundreds of portals like this across the city. 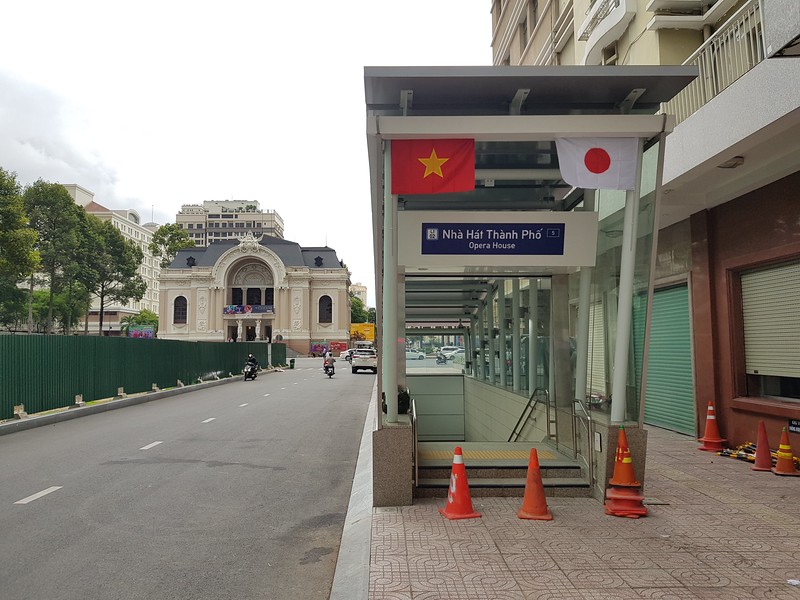 With the metro originally being due for completion in 2017, developers have wasted no time in building new apartment towers around the stations. Here is a full report of construction projects near every Line 1 station.

At the elevated stations, the concrete structures are completed and they are now being fitted out. So far though there is no sign of work beginning on pedestrian overpasses to connect the stations. Most of Line 1 runs alongside the massive Hanoi Highway with its 14 lanes of traffic. It’s too dangerous to cross by foot, so these pedestrian crossings will be essential to get passengers across the other side. 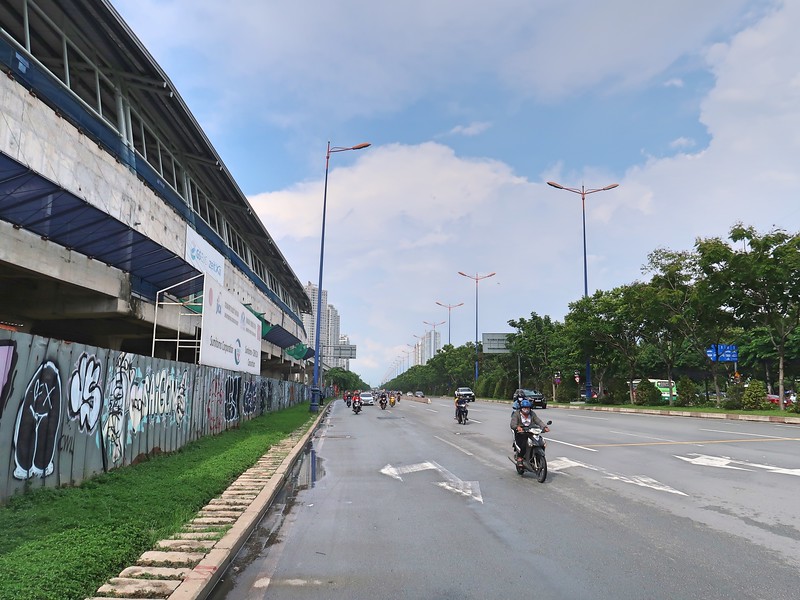 [Thao Dien Station next to the Hanoi Highway.]

While the opening has been delayed, citizens of Saigon may at least get a glimpse of what the service will look like when train sets start testing on the elevated section in the third quarter of 2020. 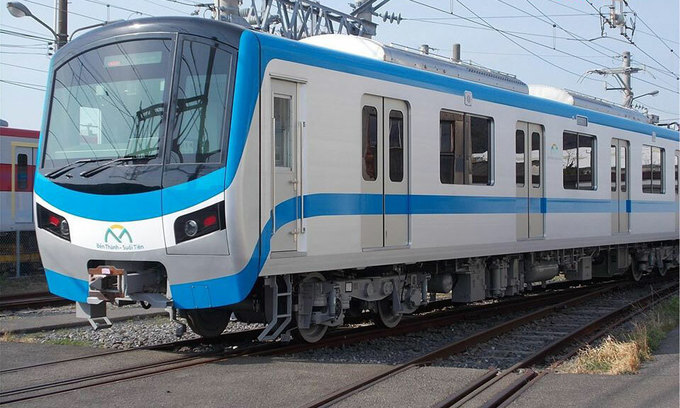 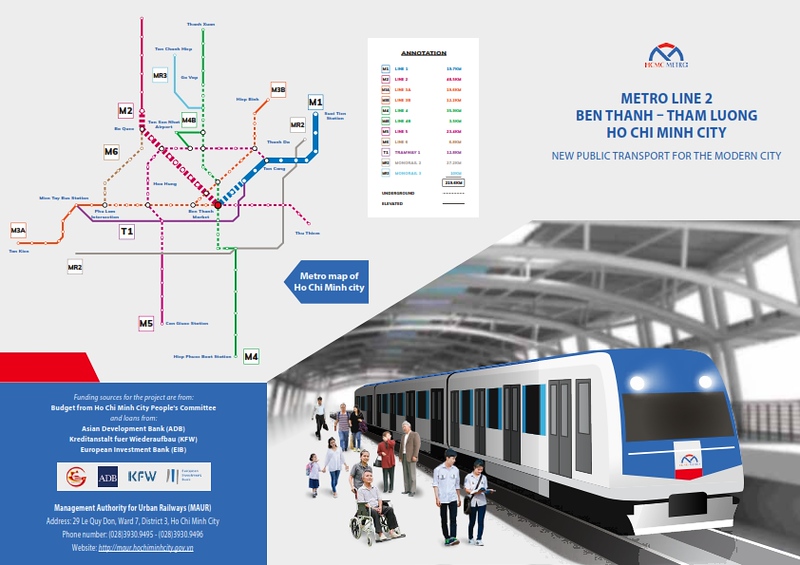 Work on Line 2 almost began 2015 when a ground-breaking ceremony was held for an administration building. No work started on the railway, and it is not expected to start until 2021. 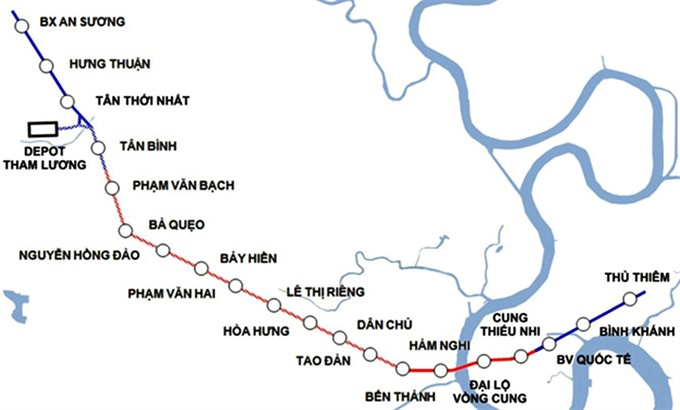 Phase 1 of Line 2 will travel from Ben Thanh and then under Cach Mang Thang 8 Road (CMT8) and then to District 12 in the northwest of the city.

[If ever there was a road in Saigon that could use some metro relief it is CMT8.]

There is at least visible progress that this line is going ahead. Land is being acquired along the route of CMT8, and demolition of houses at the station sites is underway.

Land acquisition has been one of the factors in slowing the construction process on Line 1 and Line 2. Land for Line 2 was meant to be cleared by June 2020, but it has fallen behind schedule. 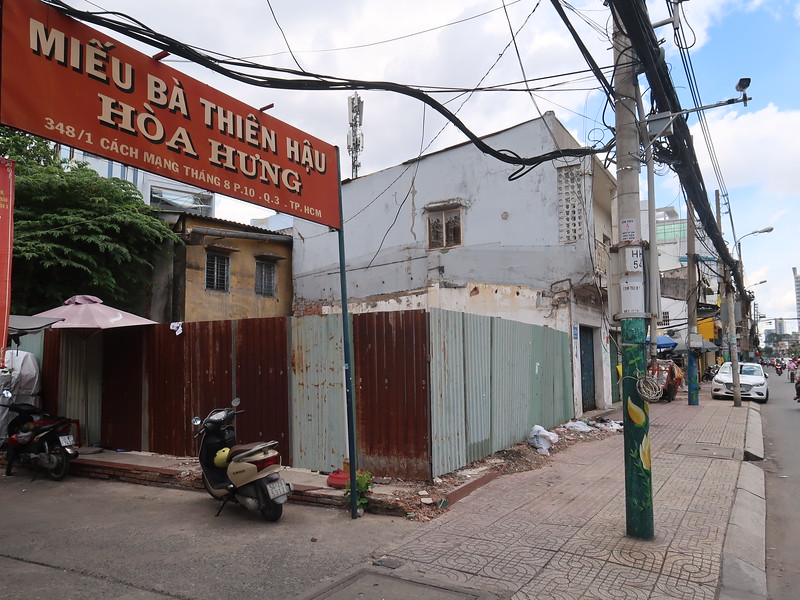 At Hoang Van Thu, CMT8 becomes Truong Chinh Road. This large intersection will be an interchange for Line 2 and Line 5. 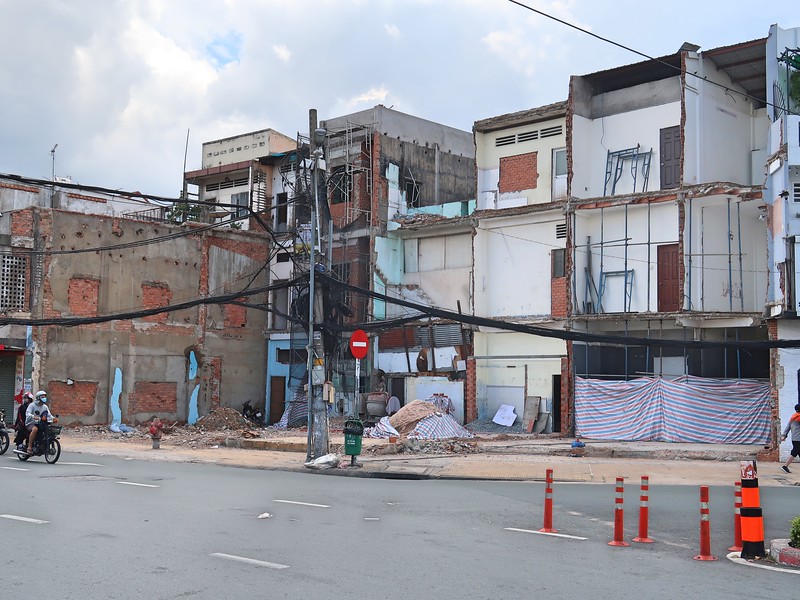 Line 3A will be a continuation of Line 1 from Ben Thanh station. It will be built in two phases, with phase 1 being a 9.7km line to Mien Tay bus terminal. Phase 2 will extend the line to Tan Kien Ward in Binh Chanh District, in the southwestern corner of Ho Chi Minh City.

The plan for the line was submitted in 2017 with a projected completion date of 2026.

A promotional video was released also released in 2017 showing the stations from Ben Thanh to Mien Tay.

The most recent news in July 2020 has the first phase beginning construction in 2025, and will be completed in 2031.

As with the Line 2A in Hanoi, the name 3A is bugging me. This might be a designated project number and not the final line name. If it’s connected to Line 1 it should continue as Line 1.

Line 5 will run along the north and western side of the city, enabling commuters to travel across parts of the city without going into the centre. The first phase consists of the northern half that connects Bay Hien (Line 2) to Tan Cang at Saigon Bridge (Line 1).

[Tan Cang station on Line 1, and a future interchange station with Line 5.]

Most of the capital was pledged in 2013, but since then no significant progress has been made. It was submitted for appraisal in 2017, and more funds and consultants were called for in 2018.

The most recent update from the Management Board of Urban Railway reports that a feasibility study about the project is being considered by authorities. It will then be submitted to the prime minister and the National Assembly. 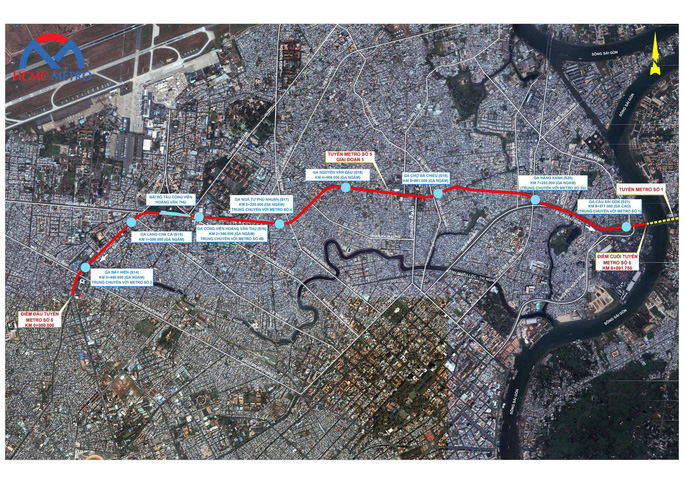 At the Bay Hien worksite (the Line 2/Line 5 junction station) there is a plan showing provision for access from Line 2 to Line 5. The Line 5 platforms won’t be built during the Line 2 construction. 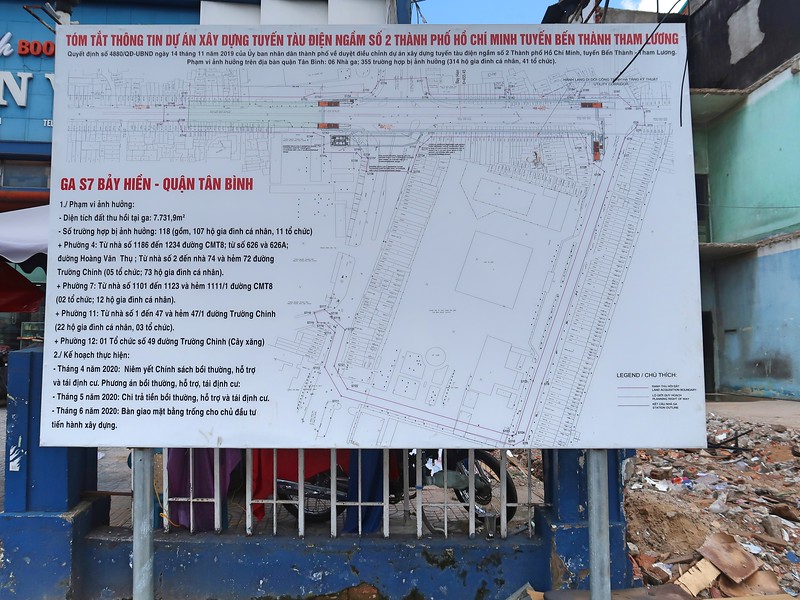 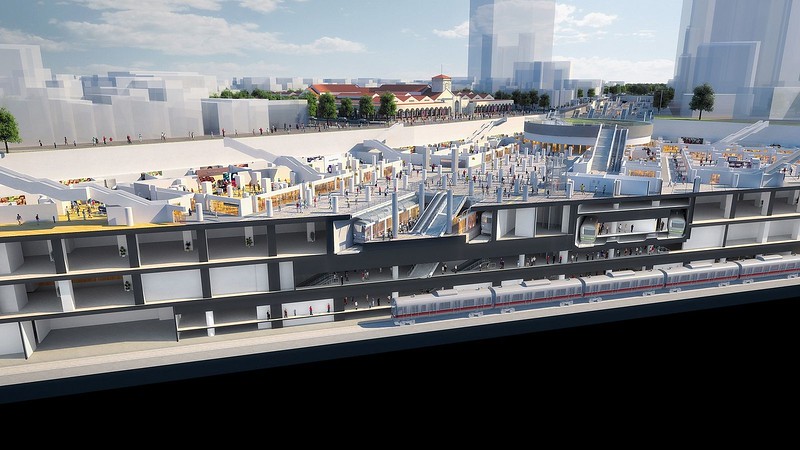 Ben Thanh Central Station is being built in conjunction with Line 1. The station will be an interchange for three lines (Line 1/3A, Line 2, Line 4). It’s a massive operation as it requires four underground levels to accommodate the future lines.

Even though the construction of the station is for three lines, the cost is included as part of the Line 1 budget. It would have been instructive to see what the cost of the line was without this extra project.

On top of the station will be a pedestrian plaza that connects to a relandscaped park, and it will be opposite the new landmark Spirit of Saigon towers. From Ben Thanh station there is a proposed underground mall that will connect to Opera House station, running underneath Le Loi St.

After researching first metro systems in Aisa I found that no metro has started with an integrated 3-line interchange with a pedestrian plaza and underground mall in the centre of the city. There is nothing like this in Southeast Asia, and the city and metro authority should prominently promote this feature when it is closer to completion. 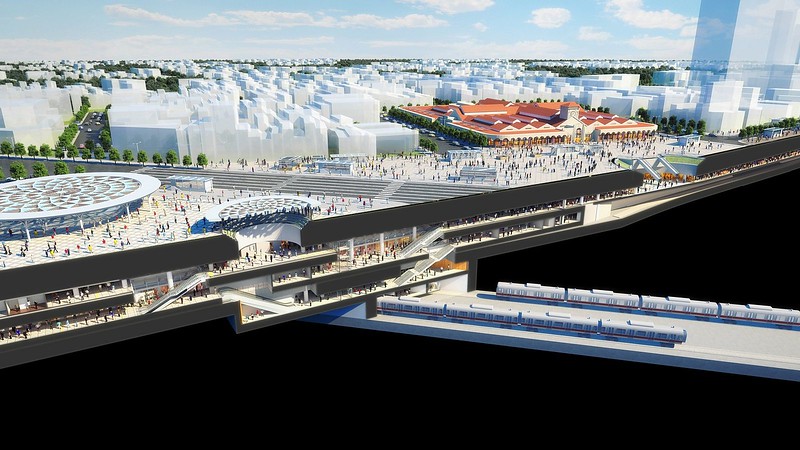 My main concern is that the station area will be littered with construction material for at least another decade because the other lines haven’t started yet.

Another problem is the delay of the underground shopping complex under Le Loi Street. This was planned to be built at the same time as Line 1. 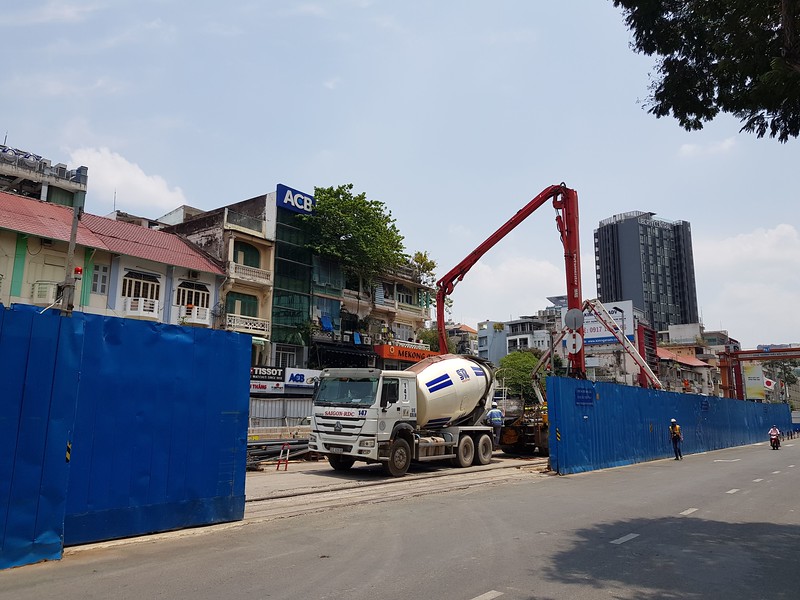 With no investor for the underground mall, the city may be looking at a scenario where Le Loi is still closed off with construction fencing even when the metro is completed. 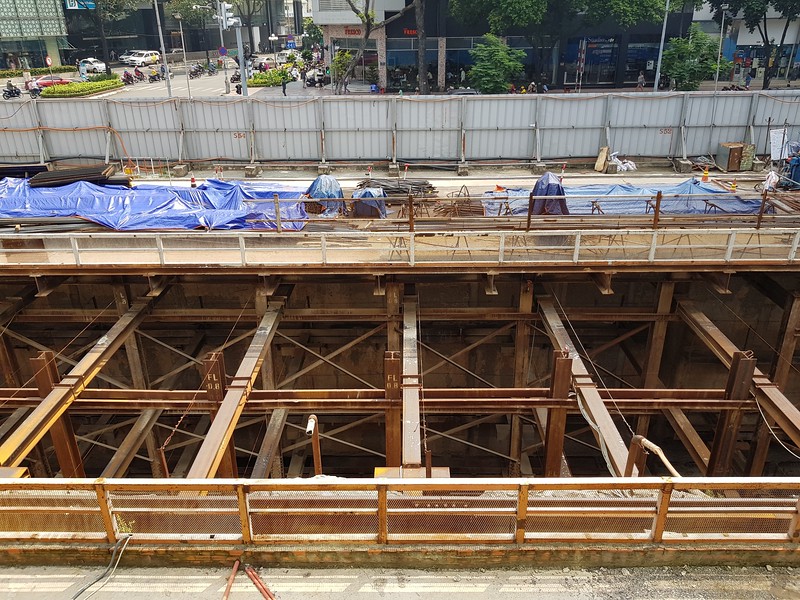 [The Le Loi metro construction pit. How long will this hole in the ground be here?]

The rest of the lines are years away from beginning, so rather than rehashing the details over again, you can see the lines on my HCMC Metro report.

If you want to see what I think the metro system should look like in the future, visit the Saigon Metro concept map.

I will be running a series of annual metro reports for major cities in Southeast Asia (Kuala Lumpur, Bangkok, Manila, and Singapore). Here is the Hanoi metro update for 2020.