Hanoi opened metro Line 2A on November 6th 2021, making it the first urban rail transit line in Vietnam. I have been watching this line slowly (very slowly) get built while I have been based in Vietnam.

I visited Hanoi in 2020 thinking that my metro report would include a review of the new line, but it was delayed again. I had every intention of being in Hanoi for the 2021 opening, then the pandemic hit Vietnam hard in the latter half of 2021, so I was unable to attend.

Perhaps it was better that I visited the metro six months after it opened. It’s enough time for staff to get into a work rhythm and for teething problems to be sorted out. The novelty of the line would have subsided as well, so I could see how many regular passengers are using the metro (and not just metro tourists like myself).

I visited Hanoi in June/July 2021 to do an annual metro report, and I was happy to finally ride the new metro line. Without having a specific destination in mind, I just bought a ticket to the end of the line to see what it was like. I then got off an on at other stations that looked interesting.

The average tourist will probably never see this line as it is outside the city centre. The line terminates next to the Yen Nghia Bus Station, so it will be useful if you are getting a bus from there.

I usually travel to Hanoi for short visits, so I rarely stray outside the old city. Hanoi has a municipal population of about 8.4 million people, so it is on the way to becoming a mega city. This population is evident when you see how many apartment towers are outside the city centre. Along Line 2A you can see apartment towers sprouting up near each station.

The naming of the line as 2A bothers me. I was hoping that the name was a construction code name rather than an official name. Line 2A will interchange with the future Line 2, but I haven’t found any explanation why it needs to be a numbered line with a letter.

Tickets are 15,000 VND for the total length of the line, and 30,000 VND for a day ticket. There is also a monthly ticket for 200,000 VND, and discounts for students, some industrial zone workers, and group discounts for companies.

I bought a ticket at a machine at the station, and it only accepted cash payments. I’m surprised that they didn’t include cards from the beginning.

There is not a big vending machine culture in Vietnam, and I think this is partly due to not having coins in the currency. I was wondering how I would get change back. The machine dispenses dong notes back for change. I should have put 50,000 dong in the machine to see how it returns the multiple notes. Next time! 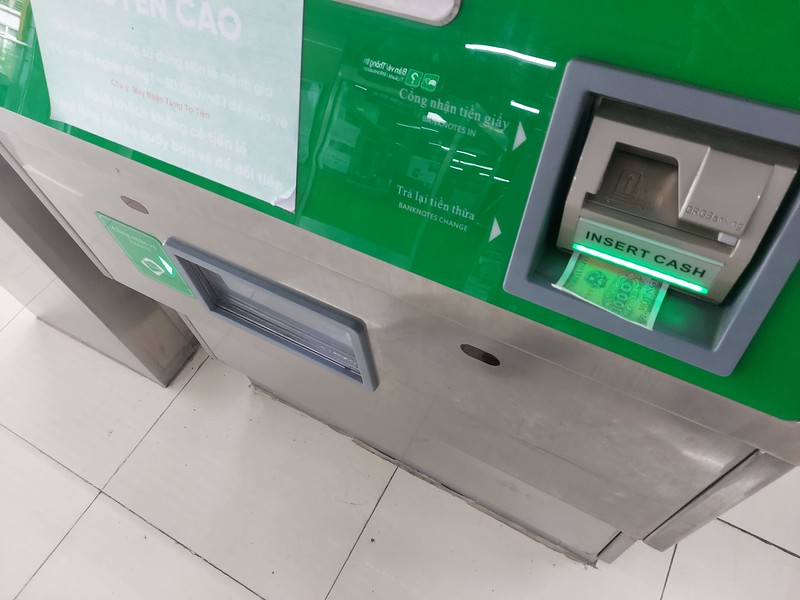 I had no idea what to expect from a Vietnamese metro system considering that there is no precedent. The line was Chinese-built using Chinese-made carriages, but metro systems are so standardised now that new systems pretty much look the same everywhere. It is like buying a mobile phone n 2022, where every handset looks the same now, compared to what was available 10 years ago. The same applies to metro systems. It used to be that metro systems felt more distinct, from the tube-shaped carriages of the London Underground to the Soviet-era aesthetic of the Budapest Metro.

On my first ride, it felt so familiar that I forgot the significance I was on the first metro system in Vietnam. It felt so normal it was like I’ve always been riding on the Hanoi Metro. Perhaps that is a good thing. Like flying, the best flights are the most unremarkable ones.

Line 2A is completely above ground, so I enjoyed gliding above the traffic below while getting a better perspective of how big this city is.

The frequency is every 10 minutes, which is very reasonable for a 1-line metro.

One thing that was noticeable was the absence of advertising.

I was in Bangkok recently, and the BTS system is plastered with advertising. The trains are covered in ads, the station platforms have ads, there are posters in the carriages, and there are television screens throughout the carriages.

In contrast, there was no advertising anywhere to be seen here. I would have thought that a new train carriage would have tv screens built-in as standard, but there aren’t even any dedicated spaces to place posters.

Not that I am bemoaning a lack of advertising. It was a novelty to see a metro carriage without a single form of advertising. This surely won’t last forever though. I kept thinking about that recent news report about how the metro lost money at the end of its first year. Putting ads in the carriages and platforms is one way to start bringing in more revenue.

The metro is just over 6 months old, so maybe there isn’t an advertising department set up yet. I also wonder if there is a graphics department. Usually, metro systems have posters for making announcements, and they can be placed on the advertising boards when there are no ads.

Continuing with the comparison of the BTS in Bangkok, there are no shops of any kind at the stations in Hanoi. This could be another form of revenue in the future.

[Space for retail at Cat Linh.]

Having experienced enough bad examples of accessibility on metro systems in Southeast Asia, I was on the lookout for mobility access in Hanoi. All the stations have lifts, so that is a good start. Not all the escalators are fully accessable though. At Lang Station you could walk straight onto the escalotor without climbing stairs, while this escalator at La Thanh had stairs first.

Not every metro system in the world has public toilets, so I was pleased to see that there are toilets inside the station. The toilets were kept clean with the option of toilet paper and bum gun.

For some reason though there was no soap dispensers or hand dryers.

There are plans for 10 lines in the future Hanoi Metro system, so there will be many interchanges between lines.

I’m already concerned that seamless transfers aren’t being planned for at future interchanges. I mentioned in the 2022 Hanoi metro report that there doesn’t appear to be an interchange within the ticketed area at Cat Linh between Line 2A and Line 3.

Looking at the future map from the Hanoi Metro site, there is proposed interchange at Line 2A Thuong Dinh with Line 2 and Line 4. It would have been ideal to have built the station shell with a cross-platform interchange set up for future lines.

[Thuong Dinh Station – Where will the future interchange be?]

Bangkok’s Siam station is a perfect regional example of a cross-platform interchange, where you can switch from the Sukhumvit to Silom lines heading in the same direction.

Instead, Hanoi is going to commit the same bad mistakes of Bangkok by having unplanned interchanges that involve leaving the ticketed area and traversing stairs. BTS Asok to MRT Sukhumvit is a textbook example of how not to do an interchange

There is a proposal to extend the line further from Yen Nghia, but there is no chance of it being extended from Cat Linh.

The growth of Line 2A will depend on future interchanges with other lines, so I look forward to returning to Hanoi to see this progress.