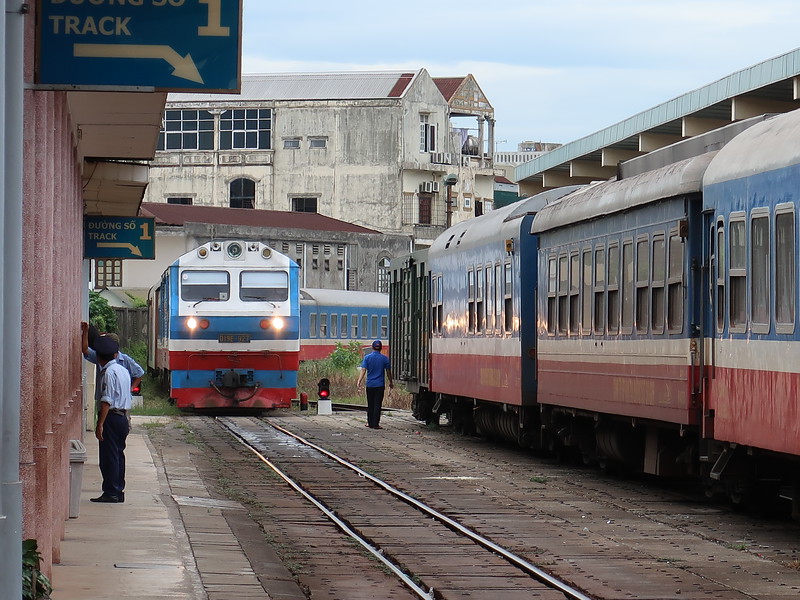 The Vietnam North–South express railway is a proposed high speed railway that would replace the current North–South railway between Hanoi and Ho Chi Minh City. The new railway would be a double-track standard gauge (1,435 mm) electric railway with a track length of 1,570 km. Train speeds have been proposed from anywhere between 150 km/h to 350 km/h. Read more about the proposed speeds of the North-South Express Railway.

The current Hanoi – Ho Chi Minh City railway is a single track metre-gauge railway using diesel locomotives. The fastest service on the 1,726 km track takes 29 hrs, 30 mins at an average speed of 58.5 km/h. This railway was completed in 1936 (known then as the Transindochinois Railway), and the journey took 40 hours. This is the same speed of some local services that still operate today.

If the express railway is built with a speed of 350 km/h, the travel time between Hanoi and Ho Chi Minh City would be reduced to five hours and 20 minutes. 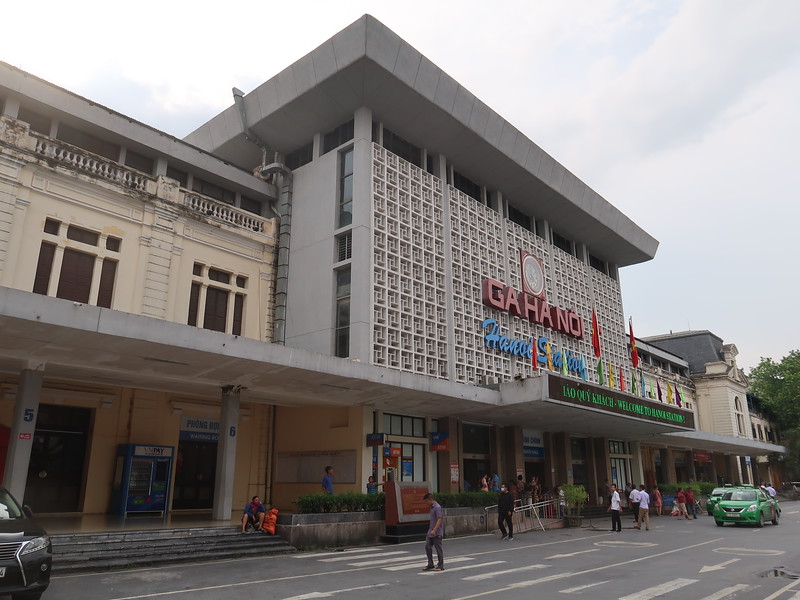 The new express railway was first officially proposed in 2007, with construction to begin in 2010. The plan was cancelled in 2010, only to be revived again in 2012.

A report un 2013 concluded that it would be cheaper to build a new one than rehabilitate the old line.

Since then there have been annual announcements of a new feasibility study that will be submitted for consideration by the National Assembly.

In August 2020 the Ministry of Transport (MoT) was in the preparation process stage, with an estimated investment of US$58.7 billion.

The railway would be built in stages, with the first phase beginning with Hanoi – Vinh and Ho Chi Minh City – Nha Trang between 2020 – 2032.

The second phase between 2030 – 2045 would complete the remaining sections.

The train speed of the North–South express railway has not been settled upon yet, as that will be a determining factor of the final project cost. A high-speed railway like the Shinkansen (which operates at 320 km/h) would be more expensive to build than a railway that can run at up to 200 km/h (such as the railway currently being built in Laos).

The line will follow a similar route to the current line along the coastal regions. The route will be shorter though due to the new line taking a straighter route compared to the old at-grade line.

Most of the current line is at grade, causing regular accidents with so many road crossings across the country. The new line will be separated from traffic, with sixty percent of the tracks on viaducts, 10 percent underground and 30 percent at ground level.

[No more Hanoi Train Street when trains are separated from traffic.]

The official route and train speeds aren’t known yet, so this page will be updated if/when they become known.

VN considering feasibility of North-South high-speed rail project – [06/12/22]
“Minister of Transport Nguyen Van Thang proposed that World Bank (WB) help Vietnam find suitable partners for the country’s North-South high-speed rail project. This proposal was made in a working session with WB’s National Director in Vietnam at the beginning of this December.”

Vietnam considers high-speed rail line – [07/11/22]
“The Ministry of Planning and Investment has thrown its weight behind a North-South express railway with a maximum speed of 180-250 km per hour as proposed by the Ministry of Transport.”

Raft of options still to pore over for high-speed railway – [04/11/22]
“Choices on innovative solutions, railway speed, and capital mobilisation for the North-South high-speed railway project must better accommodate Vietnam’s circumstances.”

Second chance here for high-speed rail – [09/09/22]
“The Politburo will decide on the development of a North-South high-speed railway in September, which was previously turned down by the National Assembly in 2010.”

Nine new railways expected to be developed by 2030 – [20/10/21]
“The Government has this month approved a plan to develop nine new railways with a total length of nearly 2,400 kilometers by 2030, including the North-South express railway project.”

Railway sector needs 10.4 bln USD to expand network in next decade – [19/07/21]
“Among the nine new routes, the top priority is given to the North-South high-speed railway project with a plan to build a double track railway of 1,435mm size, stretching over 1,545km.”

Ambitious railway development plan in Vietnam until 2030 – [12/06/21]
“Among the nine new routes, top priority is given to the North-South high-speed railway project, with plans to build the first two routes: Hanoi-Vinh and Nha Trang-Ho Chi Minh City.”

Need for high-speed rail arguments continue unabated – [28/03/21]
“More than 10 years after they were first proposed, high-speed railroad plans remain mired in concerns and disagreement over speeds and cost.”

High-speed trains proposed to link Hanoi, HCMC with central region – [20/02/21]
“Two high-speed railroad routes between Hanoi and Vinh and HCMC and Nha Trang are expected to be operational by 2030.”

In decline, what’s the future for Vietnam’s historic North-South railway? – [02/03/21]
“Vietnam’s North-South railway has remained much the same since it was first built 85 years ago, with the iconic line highlighting the halting nature of Vietnamese infrastructure projects as plans to modernise have gone without progress for more than a decade.”

200 kph dual purpose railway better option for Vietnam – [05/11/20]
“A 200 kph rail route that can carry both passengers and cargo will benefit Vietnam more than a 320 kph passenger exclusive, an expert says.”

Vietnam Politburo to review progress of US$59-billion North-South express railway – [11/08/20]
“Prime Minister Nguyen Xuan Phuc has tasked the Ministry of Transport (MoT) with reporting the progress of the preparation process for the North-South express railway project with an estimated investment of VND1,350 trillion (US$58.7 billion) to the Politburo, the country’s supreme decision-making body.”

Vietnam should forget about high speed railway until 2030 – [25/07/19]
Opinion piece by Huynh The Du, lecturer at Fulbright University.

Vietnam could halve cost of north-south high-speed rail by reducing train speed: ministry – [09/07/19]
“The construction of a high-speed railway between Hanoi and Ho Chi Minh City could cost only US$26 billion, compared to the initial estimate of $59 billion, if its operational speed is reduced from 350km/h to 200km/h, according to the Vietnamese Ministry of Planning and Investment.”

Bullet train to connect Hanoi with HCMC in five hours – [25/12/18]
“Vietnam’s bullet train will cut travel time between Hanoi and Saigon to five hours from the current 24.

The railway project management board has submitted a pre-feasibility study to the Ministry of Transport, which quotes transport consultants’ estimate that if the train travels at 320 km/h, its running time would be from 5 hours 17 minutes to 6 hours 50 minutes depending on the number of stops.” 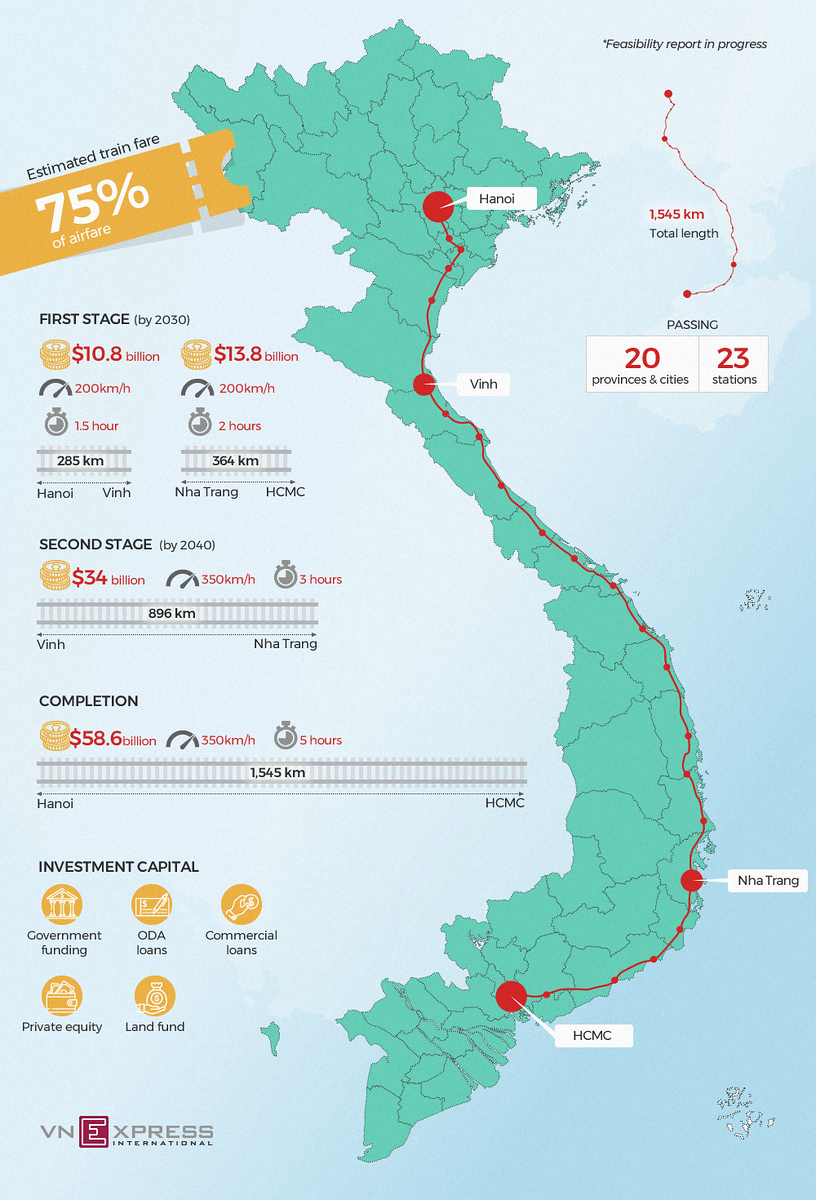 Vietnam sees high-speed train flying high – [16/09/18]
“The Ministry of Transport is working on a feasibility study for the high-speed railway project what would span 1,545 kilometers (960 miles) to connect Hanoi and Ho Chi Minh City.”

Vietnam plays catch up with high speed rail – [02/09/18]
“Vietnam must be feeling high-speed-rail (HSR) envy as its neighbours move ahead with their respective HSR projects, propelled by China’s Belt and Road Initiative (BRI). The irony is, Vietnam had already planned for HSR ahead of everyone else, back in 2007.”

National Assembly to vote on high-speed train in 2019 – [20/11/17]
“The National Assembly (NA) will decide the fate of a future high-speed railway in Viet Nam in 2019 after the transport ministry completes a project report, Prime Minister Nguyen Xuan Phuc said this week.”

Vietnam revisits $56 billion plan for north-south express railway – [17/10/16]
“The Ministry of Transport is currently working on a feasibility study for an express railway across the country, said Deputy Prime Minister Trinh Dinh Dung, which he hopes will be submitted for parliamentary approval by 2018.”

Construction of North – South express railway re-proposed – [30/10/13]
“In the reports to the Ministry of Transportation and the Office of Government, the Vietnam Railways Corporation has basically agreed with the recommendations of the Japan International Cooperation Agency (JICA) on the North-South railway.”

Vietnam revamps high-speed train project – [23/08/12]
“An ambitious but costly high-speed railways system connecting Hanoi and Ho Chi Minh City and other major towns in Vietnam has been modified by the government, trying to cut initial costs of $56 billion to $21.4 billion.”

Transport Ministry moves on with two express railways – [30/10/10]
“Deputy Prime Minister Hoang Trung Hai has instructed the Ministry of Transport to set up a steering board to receive Japanese technical assistance for the Hanoi-Vinh and HCM City-Phan Thiet express railway projects.”

Controversies over North-South express railway project – [25/05/10]
“The National Assembly Standing Committee has approved the North-South express railway project but they still wonder where Vietnam will find the $55 billion needed for this huge project. This project was still a controversy at the 7th National Assembly session, which opened on May 20 in Hanoi. VNNB summarises the development of this project.”

Vietnam to build high-speed rail with Japan aid – [06/02/07]
“Vietnam will build a high speed railway with aid from Japan at an estimated cost of $33 billion, a project that would cut travel time by two-thirds between Hanoi in the north and southern Ho Chi Minh City, the government said.”

PM agrees on express railway between Hanoi and HCMC – [06/02/07]
“Following the proposal of the Vietnam Railways Corporation (VRC) and recommendations from the Ministry of Transport and Ministry of Planning and Investment, the Prime Minister has approved a project to build an express railway between Hanoi and Hồ Chí Minh City and assigned the VRC to carry it out as a project investor.”

The visit to Japan successful: says PM Nguyen Tan Dung – [22/10/06]
“Japan pledged to maintain and increase its official development assistance (ODA) to Vietnam to develop socio-economic infrastructure facilities. Top priority will be given to the Trans-national Express Railway Line project, the Trans-national Highway project and a project to develop infrastructure facilities in Hoa Lac High-Tech Zone to attract Japanese investors.”