Should the future Vietnam North-South Express Railway be a high-speed or semi-high-speed railway?

Vietnam is planning to commence construction of the North-South express railway in 2028-2029. Even with years of feasibility studies and consultancy reports, no decision has been made on how fast the new railway should be.

For context, the fastest service on the current North-South railway takes 31h 25m to cover the 1725.5 km journey, for an average speed of about 55 km/h.

A new railway with speeds from 160 km/h to 350 km/h would be a great improvement on the current railway. The question is how fast should the new railway be?

To come up with an answer, I’ve compared other high-speed railways around the world, and compared the new journey times from Hanoi to Ho Chi Minh City at different speeds.

Comparison of other high-speed and semi-high-speed railways

Japan was the first to propose rebuilding the North-South railway in 2007, so there have been mentions in the media of Vietnam building a Shinkansen-style railway. The Shinkansen is no longer the fastest train in the world, but the name has become synonymous with high-speed rail.

To make a comparison, I’ve picked the Nozomi service that runs between Tokyo and Osaka. The train service on this route can reach speeds of 300 km/h, covering the 515 kilometres in 2 hours 21 minutes on the fastest service.

Spain has become one of the leading high-speed rail countries in Europe, and a good city pair to look at is Madrid-Barcelona. This route is built for a top speed of 350 km/h, though its operating speed is “only” 310 km/h. The average speed is close to 250 km/h. 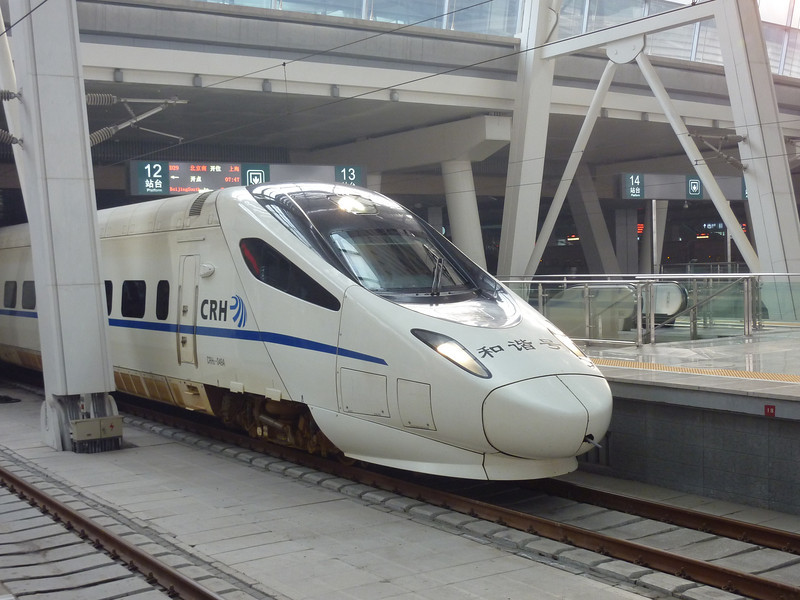 The Beijing-Shanghai high-speed railway offers the closest similarities for comparison to Hanoi-Ho Chi Minh City. Beijing-Shanghai is 1318 km, while the proposed length of the Hanoi-HCMC line is 1545 km.

The Boten-Vientiane Railway (also known as the Laos-China railway) is the most useful railway to make a comparison with for the semi-high-speed alternative. It’s also an instructive look at what it would look like if Vietnam let China run the construction process.

Now that the railway is up and running, this looks like the ideal speed for a country the size of Laos. I think this would be too slow considering the size and population of Vietnam.

This is what the Hanoi-HCMC travel times would look like with other average speeds. This table shows average times with a rough estimate of what the top speed would need to be to attain that average. This is just for illustration using rounded numbers to facilitate a discussion and it is not from any proposal.

The table shows the top proposed speed of 350 km/h, with an average speed of 309 km/h required to produce the round-figured 5-hour trip. At the bottom of the list is the same train speed in Laos, which would now be the minimum benchmark for consideration.

These calculations use the distance of the quoted new length of 1545 km, which is shorter than the current 1725.5 km line. The new line would shave kilometres off the old route by straightening the line with tunnels and viaducts.

What train speed is best for Vietnam?

Knowing the average speed is one factor, but the other factor that needs to be considered is the construction cost per kilometre for each system. Building a high-speed railway with a speed of over 300 km/h would cost more to build and maintain than a semi-high-speed railway. Without knowing the exact figure, it is hard to make a call on what is best for Vietnam.

Personally, I would love to be able to travel from Saigon to Hanoi in 5 hours by train, so I wouldn’t be complaining if they built it. I suspect though that the 309km/h figure was calculated to fit the 5-hour time, making it a more appealing alternative to flying.

5 hours from Hanoi to Ho Chi Minh City would be a genuine alternative to flying (once you factor in getting to and from each airport and checking in). I am sceptical of this figure when you consider that it would mean it is a faster average time than the Beijing-Shanghai service.

The problem Vietnam has is the distance between these two major cities. The Beijing-Shanghai line is the only comparable example of a long-haul domestic railway, but that is for two cities with over 20 million people. China had the population base and the political will to build this line, and they now have the world’s largest high-speed rail network.

This is not to say that a high-speed railway wouldn’t be of great benefit to Vietnam. Even though the two main city pairs are so far apart, most of Vietnam’s major cities are along this route. A train that gets you from Saigon to Hanoi in over 6 hours isn’t likely to win over business travellers, but it will be a game-changer for most city pairs on this route. For example, it takes over 8 hours to travel from Ho Chi Minh City to Nha Trang by train. That journey is 411 km, which should not be a viable flight route. A high-speed railway could bring that down to an hour and a half, turning Nha Trang into a beach suburb of Saigon and making flights between the two cities redundant.

Real-world examples have shown that an introduction of a high-speed railway can drastically reduce plane travel between city pairs.

[Before and after high-speed market shares (via bitre.gov.au.]

High-speed railways have had a big impact on reducing flights in Spain, and apparently high-speed trains helped kill Alitalia.

Judging from other high-speed railways, the ideal length is under 1000 km. The World Bank says the “optimal distance for HSR ranges between 150 to 800 km (up to a maximum of 1200 km in certain settings).”

Instead of looking at the journey time of Hanoi to Ho Chi Minh City, the better consideration would be all the other city pairs on this route. Da Nang would be the big winner, being the main city in the middle of the line. The train to Da Nang would become the best alternative for every city pair. This would relieve pressure on Da Nang’s overloaded airport, and help turn Da Nang into a new regional hub.

Japan vs China and the Jakarta-Bandung HSR

One last consideration is who will help build it. There is competition between Japan and China to build railways in Southeast Asia, as was seen with the Jakarta-Bandung high-speed railway. China put in a lower bid, but the project has been delayed by years and is turning out to be a financial sinkhole. The question has to be asked if China quoted a realistic cost when they undercut the Japanese offer. On the other hand, China was able to build the semi-high-speed rail in Laos on time and reasonably within budget. Japan vs China in Southeast Asia is a topic for another article.

The Jakarta-Bandung HSR is scheduled to start test running in November 2022, in time for the G20 meeting. The Vietnam government will surely be watching the first true high-speed railway in Southeast Asia, and maybe they will be inspired to build the same.