The Ho Chi Minh City – Phnom Penh Railway is a proposed railway that would connect the capital of Cambodia with the largest city in Vietnam. Despite the two cities being relatively close to each other and former French colonial possessions, there has never been a railway connecting Phnom Penh to Saigon.

Even though the cities are only 240 km apart and the land is mostly flat terrain, there are two major river crossings in Cambodia that would have deterred colonial railway planners. This is the same problem that the railway builders faced when looking to extend the Saigon – My Tho railway deeper into the Mekong Delta.

Saigon to Phnom Penh has long been referred to as the missing link in the Southeast Asia railway network. It’s the shortest distance between two cities where if a railway was built it would form a continuous railway from London to Singapore. 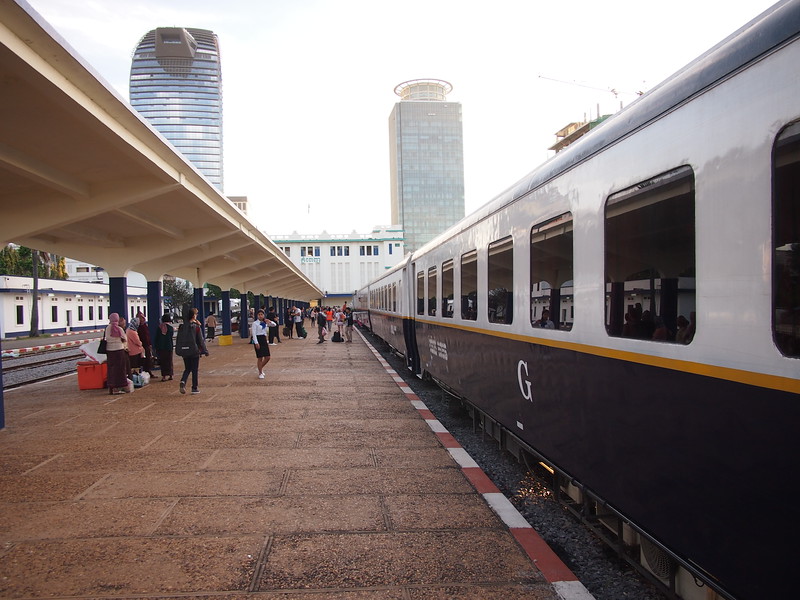 Organisations such as ESCAP and the ADB have held conferences for decades discussing ways to fund and build this railway, thus completing what is known as the Trans-Asian Railway (TAR). China was especially interested to have the missing link completed in order to fulfil the dream of a Kunming–Singapore railway, also know as the Pan-Asia railway. In the end China went ahead with their own plan of building a railway through Laos which will connect China to Singapore by rail.

The most recent update in 2020 was the announcement on the Cambodian side of a study for the line to the Vietnam border at Bavet.

Over the years there have been three proposed routes to connect the two cities:

The route via Moc Bai (Vietnam) and Bavet (Cambodia) is the current preferred route for a railway. This is the most direct option, tracing the route of the highway that connects the two cities.

A railway via Loc Ninh was the original planned route, which would have extended the Saigon-Loc Ninh railway that opened in 1933 and ran until the late 1960’s. In 2010 this route was still being considered as part of a Chinese proposal.

In the future this route may become a reality in addition to the direct route as part of other unrelated lines. There is a long-term plan to build a railway to the Central Highlands region in Vietnam, which would travel on half of the Saigon-Loc Linh route (turning off at Chon Thanh). On the Cambodia side there is an old proposal to build a railway to the Laos border via Snoul.

A third and unexpected route was proposed in 2015 to build a railway from Can Tho to Phnom Penh as part of a HCMC – Can Tho Mekong Delta railway. It’s not being considered as a route, but it’s included here as an option that has been formally proposed. In the long term if Southeast Asia had a railway network like Europe, there would be multiple ways to travel between two cities.

A map showing the three proposed routes. An exact route isn’t known yet so pins for every station aren’t added.

I made a Southern Vietnam and Cambodia railways concept map showing what a railway network would look like if all three proposals were built. This was part of my Ho Chi Minh City Metro Concept Map.

The following links are news archives for a Cambodia – Vietnam railway.

Cambodia to examine possibility of developing and expanding existing railways into high-speed railways – [17/12/21]
“The Royal Government of Cambodia will examine the feasibility to develop…a railway line connecting Phnom Penh to Bavet on the Vietnamese border”. 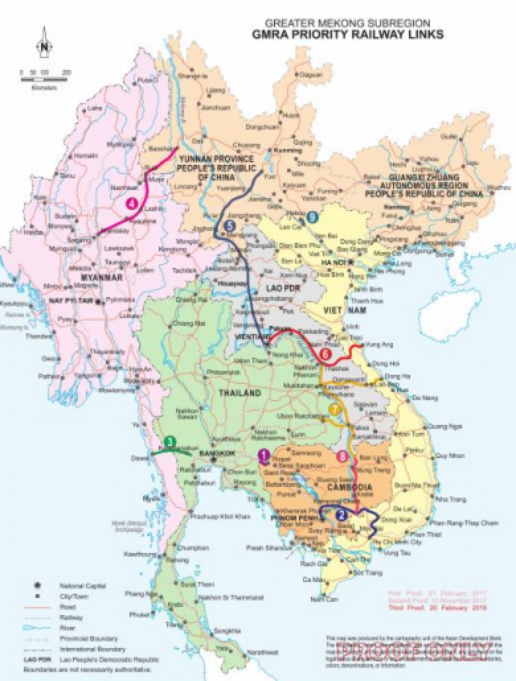 Trans-Asian Railway chugs closer to becoming a reality – [14/07/18]
“There remains one more connection from the capital to Ho Chi Minh City, to complete the rail connection from Kunming in China to Singapore. Plans for this link are included in the Vietnam-Cambodia Cooperation Strategy in the Transport Sector (2015-2018). Both countries concluded negotiations on a memorandum of understanding in July 2017.” 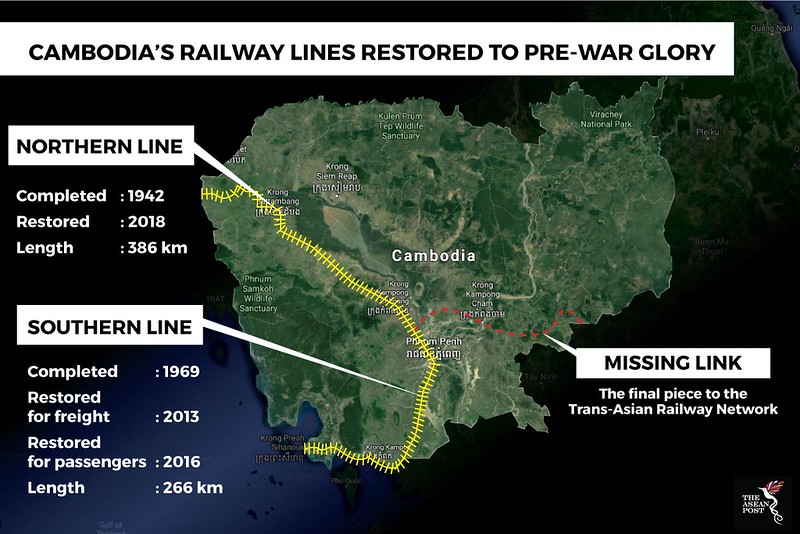 China firm wants to build railway in Vietnam’s Mekong Delta hub – [14/03/15]
“A Chinese firm has expressed interest in setting up a railway system in the southern Vietnamese city of Can Tho…The railway would connect the Mekong Delta hub with Ho Chi Minh City and the Cambodian cities of Phnom Penh or Siem Reap, Kim Hak Min”.

Proposed Rail Link to Vietnam Under Study – [20/01/15]
“Tram Iv Tek, Minister of Public Works and Transport, said his ministry is reviewing the technical specifications and recommendations of a 2011 study by China’s railway ministry. The report outlines plans for a 257-kilometer rail line to run from Oudong district in Kampong Speu province to Snuol district in Kratie province, and connecting to the Di An-Loch Ninh railway line in southern Vietnam.”

$850m backing for Cambodia’s railways – [21/08/12]
“With backing from Sino-Pacific Construction Consultancy Co, Ltd, Rail Services, along with Hikmat Asia Sdn Bdh of Malaysia, claimed that they were prepared to invest nearly $850 million in Cambodia’s existing rail lines that run between Sihanoukville, Phnom Penh and the Thai border, and build a link from the capital to Ho Chi Minh City, Vietnam.”

$686 mln needed to build Cambodia-Vietnam rail route – [21/07/11]
“A 257-kilometer railway route connecting Cambodia and Vietnam will cost US$686 million, not including compensation to be paid to people that the project will displace.”

China to bridge missing rail link – [31/10/10]
“Beijing has pledged to support the construction of a US$600 million railway between Phnom Penh and Vietnam – one of four “missing links” on a 5,382-kilometre pan-Asia track between Singapore and Kunming in southern China.”

“The link – thought to cover the line between Phnom Penh and Loc Ninh, Vietnam – is one of four identified by ASEAN as necessary for completion before the Singapore to Kunming Rail Link can open.”

Analysis: Keep Iron Silk Road on track – [21/10/10]
“Today in Cambodia, the first leg of a modern railway system has become operational. The country’s new railway should be complete by 2013, and Cambodia has already entered into an agreement with Vietnam to construct a rail connection between the two Mekong nations.

Once work on the railways is finished – possibly as soon as 2015 – a contiguous Iron Silk Road will stretch from Singapore to Scotland, bringing with it the potential for new levels of prosperity for those living along the route.”

The Agreement between the Government of the Socialist Republic of Viet Nam and the Royal Government of Cambodia on Railway Connection Point has been signed and came into force from 04th, November 2008. According to the Agreement, Vietnam has sent summary project plan and coordinate of rail connection point to Cambodia.
– The construction works is expected to be started in 2010.

Cambodian leg a bridge too far for Trans-Asia Railway – [01/09/09]
“A single unfinished, unfunded stretch of 255 kilometres, from Phnom Penh to the Vietnamese border, stands in the way of the dream of an integrated rail network stretching 14,000 kilometres from Singapore to Istanbul – and then beyond, all the way to London. It is a vision that spans five decades, some 20 nations and a total of 80,900 kilometres of track.”

Plans for Trans-Asia Railway snagged at Mekong crossing – [18/08/09]
“The feasibility study put the final cost at between $500 million and $600 million, due primarily to the high number of bridges that would have to be built across the Mekong Delta and its many tributaries.

According to the Preliminary Technical Study Report, the 1,000-metre bridge crossing of the Mekong River and 1,500-metre bridge over the Tonle Sap would be the big-ticket items with a combined $262 million. The government source said at least $120 million would also have to be spent on smaller bridges along the line.

The proposed line would connect to the existing railway linking Phnom Penh to the Thai border via a junction to be built at Bat Doeng, just outside the capital.

From there it would cross the Tonle Sap river and head east through Skon to the provincial city of Kampong Cham and across the Mekong River. It then would follow National Route 7 to Memot and Snoul before turning south east to link up with the Vietnamese rail network at Loc Ninh.”

Trans-Asia rail link completed by 2015: ASEAN official – [28/11/06]
“For the 225-kilometer missing link between Phnom Penh and Loc Ninh, a border town between Cambodia and Vietnam, Pheakavanmony said a feasibility study on the missing link, funded and conducted by China, has been completed.

Construction of the missing rail link is expected to start next year with the completion by 2010, Pheakavanmony was quoted by the Bernama news agency as saying.

Once the two countries have decided on the exact connecting point, Vietnam will immediately start construction of the 145- kilometer missing link between Loc Ninh and Ho Chi Minh City, said Tuong”.

Asian governments sign ‘Iron Silk Road’ – [09/11/06]
“The Trans-Asian Railway Network, first conceived by the United Nations in 1960, came a step closer Friday with the signing of an agreement to implement what has been dubbed the “Iron Silk Road,” evoking the trade caravans that long ago linked Asia with Europe.” 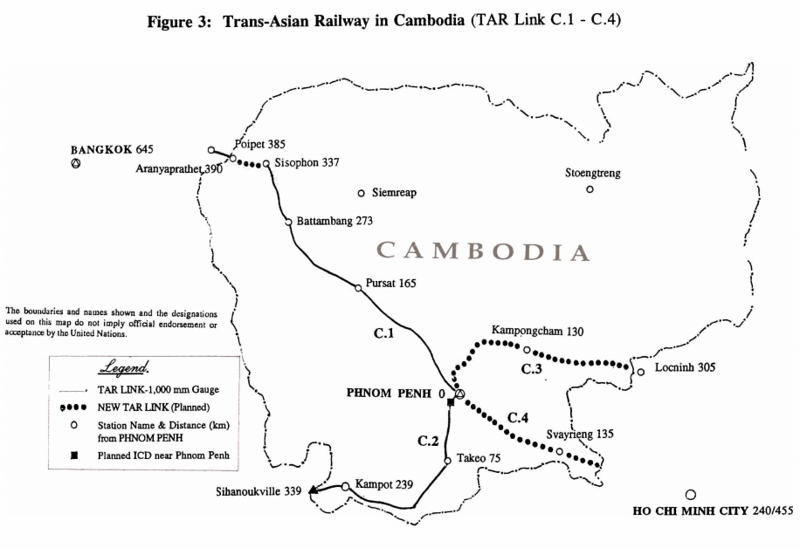 “The third and fourth TAR links in Cambodia, designated Link C.3 and Link C.4, have been proposed as alternatives for the provision of inter-capital rail links between Phnom Penh and Ho Chi Minh City, Viet Nam. These two routes were studied by UNDP in 1968.

The longer route of the two, C.3, would pass through Loc Ninh, a border town in Viet Nam, before reaching Ho Chi Minh City, covering a distance of about 450 km.

The shorter route, C.4, with a length of 240 km, would connect Phnom Penh with Ho Chi Minh City, via Svay Rieng and low-lying areas of the Mekong Delta in Viet Nam.

The 1994 ADB Subregional Transport Sector Study has also given high priority to the latter Thailand-Cambodia-Viet Nam link, and has estimated the total cost of construction to be US$ 475 million, about half of which would be for the Phnom Penh-Ho Chi Minh City section. The two alignment options pass through flat terrain but may require many bridge or viaduct crossings over low-lying areas.”