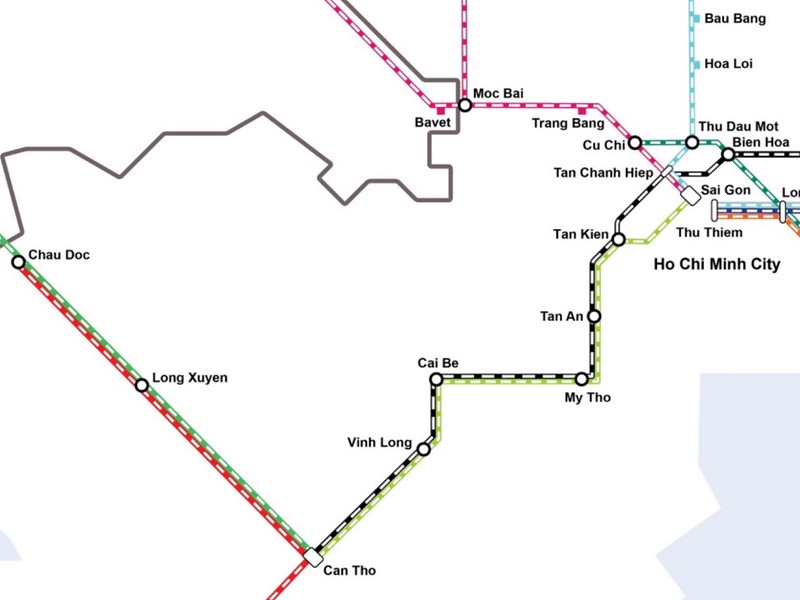 The Mekong Delta Railway is a planned railway from Ho Chi Minh City to Can Tho. This guide covers ongoing updates of this line and other proposed railways in the Mekong Delta.

This map includes possible stations on the Ho Chi Minh City to Can Tho railway, and other stations mentioned in this guide.

There is currently no railway operating in the Mekong Delta region, though there was a railway that ran from Saigon to My Tho from 1885 to 1958. The line was beset with difficulties throughout its operation and it was never extended to Can Tho. Read the full history of the Saigon-My Tho railway.

Plans to build a new railway to Can Tho were published in the mid 2000’s, and since then the cost, route, and start date have changed over the years.

Originally the railway was planned to begin at the current Saigon station in District 3, Ho Chi Minh City. There is no land reserved for a railway through the city, so this option would have been prohibitively expensive.

The preferred option was for the terminal station to the north of the city at Di An Station, in Binh Duong Province (part of Greater Ho Chi Minh City). There is a station here on the main north-south railway, so that would make it a useful junction. The railway would then travel to Binh Chanh District In the southwest corner of HCMC and continue to My Tho and Can Tho. This route totals 173 km with 14 stations.

A revised route was proposed to reduce costs that would start the railway at Binh Chanh instead, bring the total length to 134 km.

The railway would run on a double-tracked standard gauge electric railway. Passenger trains would run at 200km/h, and freight trains would have a speed of 120 km/h. At that speed the journey from Saigon to Can Tho would be about 45 minutes, but you would also need to account getting from central Saigon to the terminal station. Phase 2 of Line 3A of the HCMC Metro would be extended to Binh Chanh, providing a direct metro connection to Ben Thanh central station.

The most recent update in 2019 estimated the cost at 10 billion dollars. It was also reported in 2019 that power plants were soon to be built to support the line. There have been no status updates since.

There is no official plan to extend the railway to Ca Mau in the Deep South of the Delta region, but it has been mentioned as a possibility in news reports over the years.

Can Tho – Phnom Penh

A Can Tho – Phnom Penh railway was proposed in 2015 as part of a greater Mekong railway that would be included in the HCMC-Can Tho railway. The plan even suggested extending the line to Siem Reap, though at this point we can leave that section for Cambodia Railways.

The proposal makes the third route alternative for a Ho Chi Minh City to Phnom Penh railway. The first route is the most direct option, travelling via the current Moc Bai/Bavet border crossing. The second route option is along the defunct rubber line that went to Loc Ninh on the Cambodian border.

A Can Tho – Phnom Penh railway would then provide a new domestic railway along the Hau River from Can Tho to Long Xuyen and Chau Doc.

Ongoing news updates about railway projects in the Mekong Delta.

HCMC – Can Tho railway project set to cost over US$7 bln – [18/06/22]
“Reporting at the meeting, the joint venture consultant contractor Tedi-Tricc-Tedisouth said that the project would be constructed with a double-track railway with a track gauge of 1,435 millimeters and the designed speeds for passenger train of around 190 kilometers per hour and the freight train of 120 kilometers per hour.”

Express railway through HCMC likely to be elevated – [18/06/22]
“The 33-kilometer express rail section that runs through Ho Chi Minh City, operated by the HCMC-Can Tho railway project, is proposed to be elevated for ease of implementation.”

Construction of HCMC – Can Tho railway line proposed – [18/05/22]
“The Ministry of Transport, on May 17, informed that the Ho Chi Minh City – Can Tho railway project, with a total investment of about US$7 billion, has been prepared for a pre-feasibility study.”

5 km, $200 mln could be cut for high-speed HCMC-Mekong Delta rail – [23/01/21]
“The route will then run from Tan Kien station in HCMC’s Binh Chanh District, which borders Long An Province, to Cai Rang District in Can Tho City, the capital of the Mekong Delta.”

MAUR to carry out pre-feasibility study report on HCMC-Can Tho railway project – [14/01/21]
“The Ministry of Transport on January 13 delegated the HCMC Management Authority for Urban Railways (MAUR) to build the pre-feasibility study report on the construction of a railway route from Ho Chi Minh City to the Mekong Delta hub of Can Tho which is among the middle-term plans for public investment in the 2021-2025 period.”

REPORT: Mekong Delta Integrated Regional Plan – [16/11/20]
“There is currently no railway network in the Mekong Delta. There are external proposals for a railway to be developed between HCMC and Can Tho, with a possible extension to Ca Mau and Long Xuyen. Can Tho has the intention to develop rail-based city public transport (e.g. metro) and other cities could connect to this system in the future. Soc Trang and Bac Lieu Provinces are also considering railway connections in relation to the proposed development of any deep-sea port.”

HCMC-Can Tho high speed train to cost $10 billion – [26/07/19]
“The route from Ho Chi Minh City, Vietnam’s largest metropolis, and Can Tho, the Mekong Delta’s economic hub, is to run 173 kilometers through four provinces – the industrial hub Binh Duong, and the Mekong Delta’s major economic drivers Long An, Tien Giang and Vinh Long.”

“…the project would use double rails and 1,435mm gauge, which is the standard for high-speed rails in the world. The train would have a speed of around 200 kilometers per hour.”

Experts call for high-speed HCM City – Can Tho railway to ease delta congestion – [23/02/19]
“A high-speed rail route between HCM City and Can Tho was approved by the Ministry of Transport in 2013. It will be 140km long and have nine stations, and passenger trains will run at 200km/h and freight trains at 120km/h.”

“The project would be key to fostering the delta’s economic development, especially if the route is extended to the southernmost province of Ca Mau”.

“…seven waste-to-energy plants will be built at seven stations along the railway and two solar power plants will be set up at the first station called Tan Kien in HCMC and the terminus (Cai Cui station in Can Tho City)”.

HCMC proposes adjusting HCMC-Can Tho express railway project – [24/09/18]
“…the railway was planned to be nearly 173,700 kilometers long with 14 stations, starting from An Binh station in Binh Duong Province and running through the urban areas of HCMC and four Mekong Delta provinces.

However, representatives of HCMC and four localities in the Mekong Delta region later agreed to the Southern Institute of Science and Technology’s proposal to reduce the route’s length to 139 kilometers, shortening the travel time between HCMC and Can Tho City to roughly 45 minutes. The railway would then run parallel with the HCMC-Trung Luong-My Thuan expressway.

The HCMC-Can Tho high-speed railway will stop at 10 stations, beginning at Tan Kien station in HCMC and running through stations in Long An, Tien Giang and Vinh Long provinces before ending at Cai Cui Port in Can Tho City.” 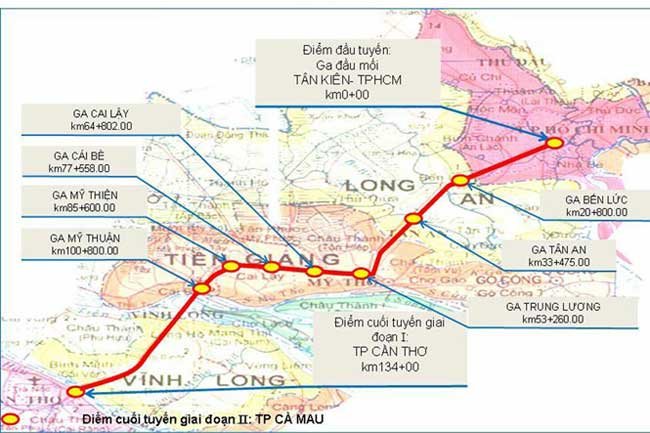 HCMC secures $5 billion from Canadian fund for Mekong Delta rail link – [08/03/18]
“Construction of a railway connecting Ho Chi Minh City and the Mekong delta capital of Can Tho is expected to start later this year using nearly $5 billion from a Canadian investment fund, insiders said.”

Vietnam mulls 45-minute Saigon-Can Tho train service – [17/07/17]
“A construction of a railway route from Ho Chi Minh City to the Mekong Delta hub of Can Tho is being reviewed, which is expected to have positive contribution to the regional development if really launched.”

HCMC-Can Tho railway in the offing – [05/07/17]
“Cargo transport between HCMC, the country’s economic center, and the Mekong Delta will be significantly improved as the city government is pushing for a rail link with the delta.”

China firm wants to build railway in Vietnam’s Mekong Delta hub – [14/03/15]
The railway would connect the Mekong Delta hub with Ho Chi Minh City and the Cambodian cities of Phnom Penh or Siem Reap, Kim Hak Min”. The China State Construction Engineering Corporation (CSCEC) “has proposed building a 180km Can Tho – Ho Chi Minh City track, whereas the respective lengths of the services to Siem Riep and Phnom Penh are 320km and 243km”.

“The railway sector will…research the building of new lines such as…Ho Chi Minh City – Can Tho”.

Vietnam’s new railway to link Ho Chi Minh City and Can Tho City – [13/11/13]
The Vietnam Southern Institute of Science and Technology and US-based EDES group…signed an agreement to cooperate in building a railway route…connecting Ho Chi Minh City with Can Tho”.

“…the railway line will be 134 kilometers long. The train would depart from Tan Kien station in HCMC’s Binh Chanh District and go through three provinces including Long An, Tien Giang and Vinh Long before reaching Cai Rang station in Can Tho City.” 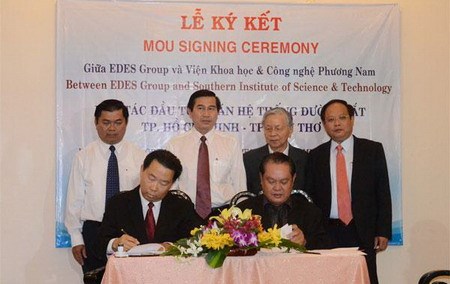 Railway project mulled to link up HCMC and Can Tho – [10/08/09]
“The Transport Engineering and Design Inc. South (TEDI South) – a design company under the transport ministry, has proposed a plan for building a new express railway line linking HCMC and Can Tho City in the Mekong Delta.”

“The railway is expected to allow trains to reach a maximum speed of 300-350 kilometers per hour.”

HCM City-Can Tho rail route to wrap up in 2020 – [02/10/08]
“A new railway line linking HCM City and the Cuu Long (Mekong) Delta province of Can Tho will become operational in 2020, under a major project initiated by the Ministry of Transport.”

Sai Gon-My Tho railway restoration draws public concerns – [17/07/06]
“According to the Viet Nam Railways (VNR), the VND7,072-billion railway construction project will be launched in 2010 and finished in 2015.”

“The railway system is 87 kilometers in length, of which 56.5 kilometers from An Binh – Tan Kien are dual-track railroad and 30.5 kilometers from Tan Kien – My Tho single-track. Besides, the project’s designing unit also proposes the construction of another railway linking Hoa Hung Station with Tan Kien one.”

“The network starts from Song Than Station, adjacent to Song Than Industrial Zone, passing Ho Chi Minh City and the southern provinces of Binh Duong, Long An to the terminal in Tien Giang province.”

“In future, the railroad will be expanded 350 more kilometers from Can Tho to Ca Mau”.