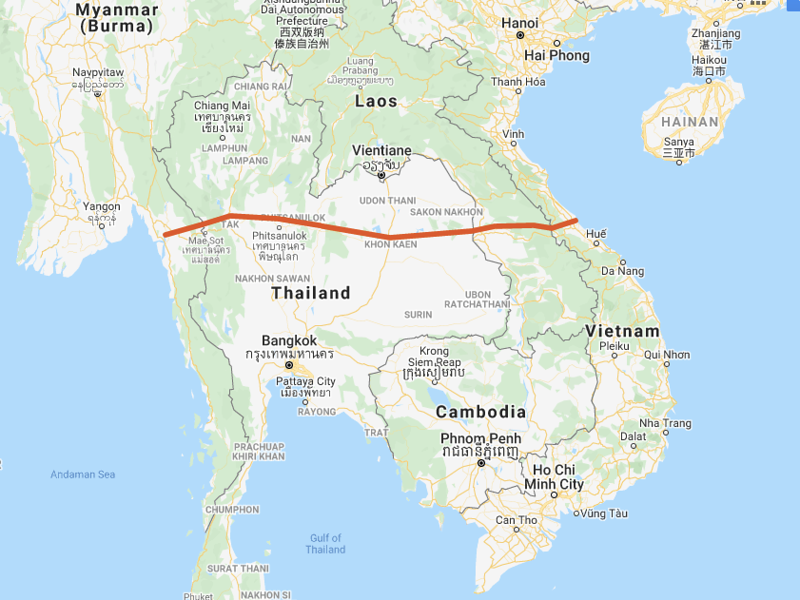 The corridor was envisaged as a land bridge connecting the Indian and Pacific Oceans, saving the sea route via the Malacca Strait. The road route connects the port cities of Mawlamyine in the west, to Da Nang in the east.

The EWEC also calls for the development of a railway that would connect the two ports. The railway would then serve cargo and passenger trains.

Work on the EWEC has focused on improving highways, building new bridges, and streamlining cross-border transport agreements. Unfortunately, not a single kilometre of new railway has been added.

If the railways are built it will transform cargo and passenger transport in the Greater Mekong Subregion.

Here is the status of the railways of the four countries that the railway passes through.

Mawlamyine is the first (or last) station of the East-West Economic Corridor. The route from Mawlamyine to Myawaddy on the Thai border is about 120 km.

Moulmein (as Mawlamyine was then known) was the first capital of British Burma between 1826 and 1852. It was an important river port in colonial times, with timber being the major export. There were sea connections to Penang, Singapore, Calcutta, Bombay, and London.

The current port at Mawlamyine is not suitable for large container ships, so there is a proposed new deep-sea port at Kalagauk Island, about 130 km south of Mawlamyine.

For businesses in Thailand shipping cargo to the west, they could send containers here instead of Bangkok, saving the journey around the Malay Peninsula. Mawlamyine as a port has competition from the proposed Dawei port and Special Economic Zone, which is closer to Bangkok.

There are currently no railways connecting Myanmar to Thailand, which is one of the many missing links of Southeast Asia railways.

With the new railway connecting to the existing railway at Mawlamyine, passengers could then travel from Bangkok to Yangon by train

The Thailand section forms the bulk of the line, traversing an 800km-long route from Maesot to Mukdahan. Even if Myanmar and Laos don’t build their section for years, this line would still be of great benefit to Thailand if they went ahead with it.

There is no east-west rail in North, Central, and Eastern (Isan) Thailand. A railway across Thailand would go a long way towards decentralising Bangkok-centric Thailand.

The railway would cross paths with the northern line at Nakhon Sawan, and the Northeastern Line at Ban Phai in Khon Kaen Province.

There have been numerous announcements over the years about the plans to start this project. There has been interest from the Korea Rail Network Authority, and Japan has proposed a high-speed railway on the line.

In Laos, the 220 km railway would run from Savannakhet on the Mekong River to Lao Bao on the Vietnam border. In November 2012 Giant Consolidated from Malaysia was awarded the contract to construct and operate the Savannakhet-Lao Bao Railway.

There was a ground-breaking ceremony for this project on 18 December, 2013, though work hasn’t begun. The right-of-way railway corridor has been marked out, and the project waits to start construction. Since then there hasn’t been any update on the status of this project.

There are 11 planned stations on the line:

A promotional video shows the railway including 11 stations along the way.

The video shows a modern Savannakhet skyline and high-speed trains travelling on a double-track railway. 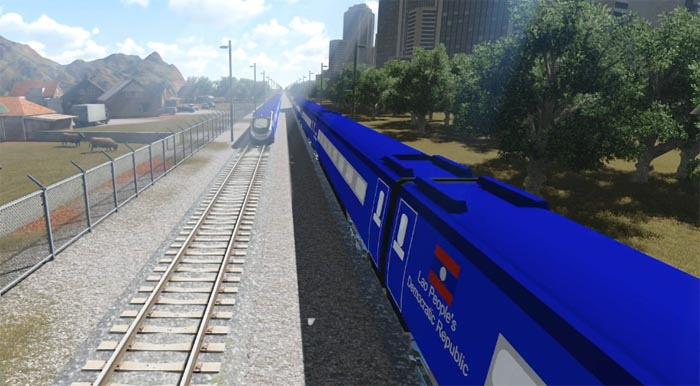 There is another plan that would extend a railway from Vientiane to Pakse in the south of Laos. That would then make Savannakhet a junction station. So maybe it will get a skyline like the one portrayed in the video. 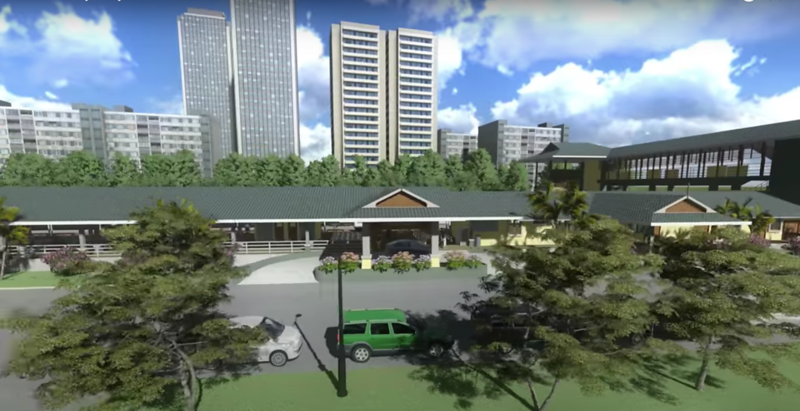 The video also shows a “Laos Railways” company. If there were 11 stations then there would be a domestic railway service stopping all stations, and international high-speed trains from Thailand or Vietnam passing through.

The Vietnam section from the Lao Bao border to Dong Ha in Quang Tri province is about 80km, making it the shortest section of the four countries. This route is mountainous though, so it would be a challenging build. Vietnam also hasn’t built a new railway for over 40 years, so this may not be a high priority compared to other work that needs to be done.

When the EWEC was first announced it included Da Nang as it was the closest sea port to the corridor. Since then Quang Tri province has established an economic zone near Dong Ha, which will include a port to serve the EWEC.

In addition to building a new railway, the North-South line still needs to be modernised. The plan has been to turn the Hanoi-Ho Chi Minh City route into a high-speed railway. The current line is a 1-metre gauge single track railway, so it would not be able to take trains from a standard-gauge east-west railway.

If the railways are built then the ports at Dong Ha and Da Nang would be the big winners, receiving freight from Laos and Thailand. It would also mean you could travel from Da Nang to Yangon by train. That would make it the world’s second Indian-Pacific railway (after the Australian railway). The Bay of Bengal is the northeastern part of the Indian Ocean, and the South China Sea (East Sea in Vietnam) is a marginal sea that is part of the Pacific Ocean.

Quang Tri Economic Zone – Quang Tri Province is by the East Sea the eastern end of the EWEC. This economic zone at Cua Viet Port is near the city of Dong Ha.

My Thuy International Port – A new port in the Southeast Economic Zone of Quang Tri, built to serve the EWEC.

Sign MOU to study the construction of the railway from Savannakhet-Laobao province – [16/09/22]
“Signing MOU for Savannakhet-Lao Bao Railway for the feasibility study and EIA with the distance of 220 km, 11 stations and a price tag of 5,000 million US dollars.”

Cash-strapped investor needs partners for $619 mln seaport in central Vietnam – [09/10/21]
“The My Thuy Seaport, which will have 10 berths, is planned to be built in three phases till 2036. It will mainly serve Quang Tri’s Southeast Economic Zone, as well as cargo in transit from Laos and the northeast region of Thailand on the East-West economic corridor.”

Construction of My Thuy Seaport kicked off – [27/02/20]
“The seaport complex aims to provide transport services in industrial zones (IZs) in the Southeast Economic Zone and other IZs in the province, as well as goods in transit from Laos and Northeastern Thailand in the East-West Economic Corridor.”

Japan eyes high-speed rail in EWEC economic area – [22/08/19]
“Japan became interested after the Japan International Cooperation Agency (JICA) reviewed the project and found the high-speed rail link to be a feasible investment. “It will enhance investment along the route and strengthen economic growth in neighbouring countries, as well as the Thai special economic zones at the border of Mae Sot and Mukdahan”.”

Da Nang plans to become Asean logistics center – [14/08/18]
“We aim to build up Da Nang as a regional logistics centre to meet import and export needs among domestic and foreign direct investment enterprises. Partners in Asean could boost trading with Vietnamese businesses along the EWEC transport system and via Da Nang ports”

Rail link to Tak gets nod from cabinet – [13/06/18]
“The cabinet accepted in principle Tuesday a proposal to construct a double-track railway linking Tak and Nakhon Phanom as part of the transport routes under the East-West Economic Corridor.”

“Under the proposal, the double-track railway would connect Tak’s Mae Sot district with Nakhon Phanom in the northeast via Kamphaeng Phet, Nakhon Sawan and Khon Kaen.”

Japan courted for East-West Economic Corridor – [13/09/17]
“…the high-speed rail project will initially link the east side of Asean, starting from central Vietnam, to Laos, Thailand and Myanmar, eventually reaching India. The goal is to create greater economic value for the countries involved.”

The road not taken – [20/02/17]
“Launched nearly two decades ago, the East-West Economic Corridor has never really lived up to its potential and may be overtaken by new regional connectivity schemes.”

Japan rail projects: Somkid off to Japan to speed up work – [03/11/15]
“Japan will invest in railway development projects, consisting of two east-west corridor routes — from Kanchanaburi to Sa Kaeo, and Tak to Mukdahan.”

Approval comes for Quang Tri Southeast Economic Zone – [17/09/15]
“The zone will include functional areas such as industrial parks (IPs), administrative areas, residential areas, tourist areas, service areas, and a port, among others.”

GCL names designer for Laos rail job – [19/12/12]
“Plans to turn Laos from a landlocked into land-linked nation is starting to take shape with the Savannakhet-Lao Bao rail project undertaken by Malaysian company Giant Consolidated Ltd (GCL) going through the final process of detailing and survey works.”

Malaysian company in $5 billion railway deal in Laos – [05/11/12]
A little known Malaysian company, Giant Consolidated Ltd, has won a $5 billion deal to build a 220 kilometre rail link in Laos, a spokesman for the Prime Minister’s department confirmed on Monday.

East-West Economic corridor still in planning stage: ADB official – [08/11/10]
“The 1450-kilometre East-West economic corridor would link the South China Sea at Danang to Mawlamyine through Laos and Thailand with air, rail and highway transport. The project has been on the table since 2005, but now faces revitalisation following the adoption of the master plan leading to 2015.”

Strategy and Action Plan for the Greater Mekong Subregion East-West Economic Corridor – [2010]
“This report aims to revise and update the strategy and action plan for the EWEC as a means of consolidating planning and programming activities by government authorities and development partners.” – Asian Development Bank.

Asia takes first step on modern ‘Silk Route’ – [22/06/09]
“A seemingly obscure agreement on traffic rights between Vietnam, Laos and Thailand now allows trucks to transit the three countries without having to unload cargo at border crossings for trans-shipment.”