Metro Manila (National Capital Region) is served by three urban rail transit lines and a commuter line. There are four new lines under construction, and five more lines are planned or under consideration.

This page lists current, under construction, and proposed mass transit railways of Metro Manila. This also includes every map showing what the future Metro Manila urban rail transit system will look like.

The Light Rail Transit Line 2 is a rapid transit line running in an east-west direction along Radial Road 6 and a portion of Circumferential Road 1. The line is 17.6 km with 13 stations.

Line 3 is 16.9 km with 13 stations. The line runs in an orbital north-to-south route following the alignment of Epifanio de los Santos Avenue (EDSA).

The Metro Rail Transit Line 7 will be 22.8 km long with 14 stations. The line runs in a northeast–southwest direction, from San Jose del Monte, Bulacan to the North Triangle Common Station in Quezon City.

The line will be extended to the New Manila International Airport in Bulacan.

The Metro Manila Subway (Line 9) is a 36 km line with 15 stations that will run north–south between Quezon City, Pasig, Makati, Taguig, Parañaque and Pasay. It will include a spur line to Ninoy Aquino International Airport.

The North–South Commuter Railway (NSCR) is a 147 km urban rail transit system under construction. The line will run from New Clark City in Capas to Calamba, Laguna with 36 stations.

The Clark–Calamba Railway (as it is also referred to) will form part of the Luzon rail network. It will replace the commuter rail in Metro Manila, and connect with the PNR South Long Haul.

MRT Line 4 is an approved mass rapid transit line to be built in Metro Manila and Rizal Province. The line will travel from Taytay to Gilmore with 11 stations and 15.6km long.

MRT Line 4 news
DOTr reveals MRT 4 will be a monorail project, targets full operations by 2028 – [04/10/21]
“The MRT 4 would be a monorail system with stations in N. Domingo, Bonny Serrano, Greenhills, Edsa, Manila Electric Co., Tiendesitas, Rosario, St. Joseph, Cainta, San Juan, Tikling Junction, North Manila Road and Taytay, the DOTr said in a video presentation. Once fully operational, travel time from N. Domingo in Quezon City to Taytay, Rizal, would be cut to 27 minutes, according to the DOTr.”

The Light Rail Transit Line 6 is a proposed rapid transit system in Cavite Province. The current proposal is 23.5 km long with 9 stations, and it would connect to the extended LRT 1 line at Niog.

SkyTrain is a proposed automated people mover line from the city of Makati to Bonifacio Global City in Taguig, Metro Manila. The line will be 1.87 km with 2 stations.

Read more about the Makati-Taguig Skytrain.

The Bicutan AGT is an automated guideway transit (AGT) system under development in Taguig City.

There is no official map showing all current lines. A collection of independent maps can be viewed in the Nomadic Notes article about the Manila Mass Transit System.

maps-manila-ph.com has a good map showing the three urban railways and the commuter railway.

This Google Map shows the stations of all operating lines.

The Wikimedia map is from 2021, and not all of the future lines are shown. 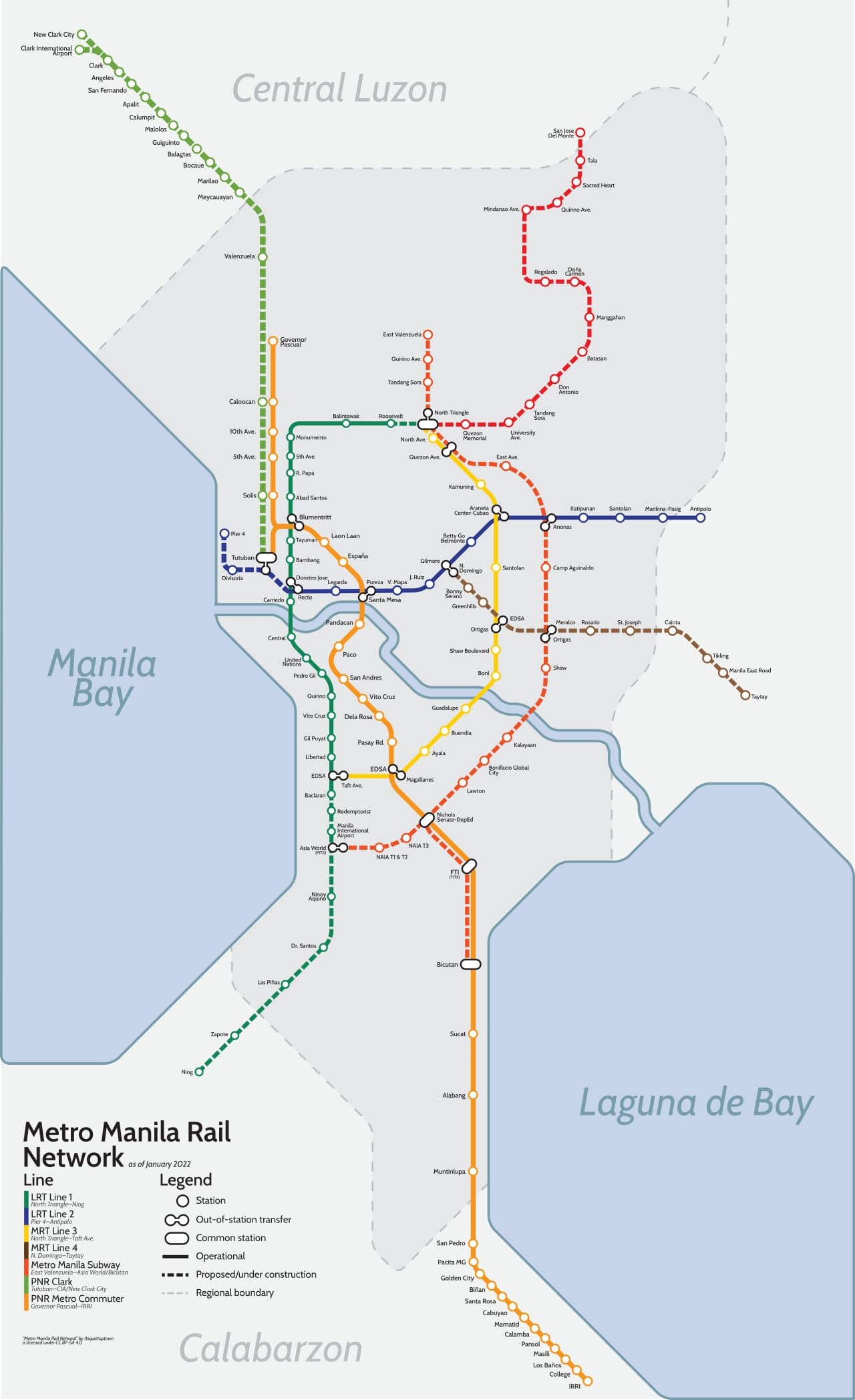 [Map by Itsquietuptown via Wikimedia.]

This map by The Greater Marin from 2017 shows most of the future lines on one map. 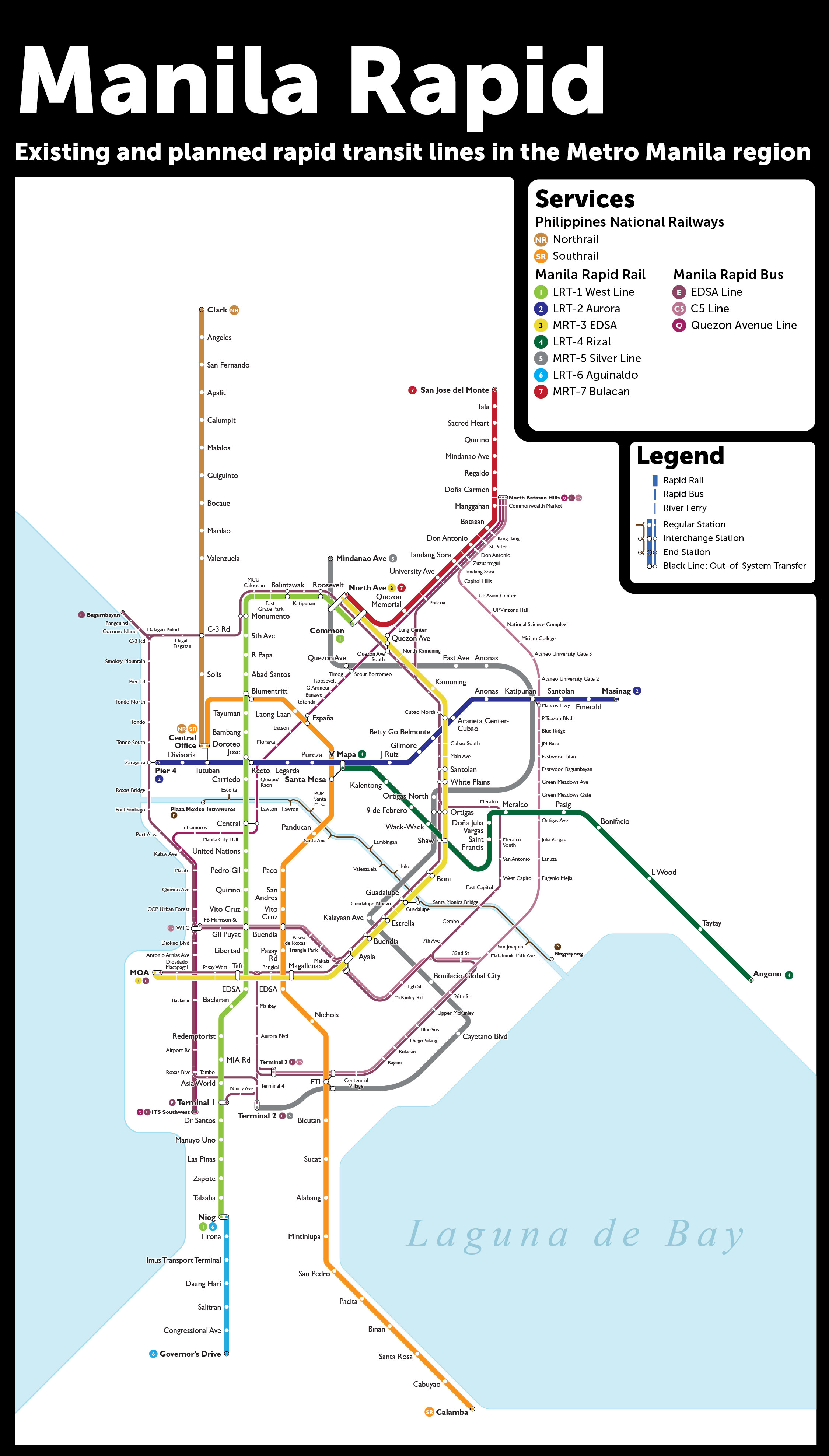 Every rail line in Metro Manila operating, under construction, or proposed as of 2022, by u/AwesomeBob20.

NCR Railway Map by u/TheOther36 shows the current lines with some of the new lines.

It’s More Fun With Juan has a map of Metro Manila mass rapid transit by 2030. 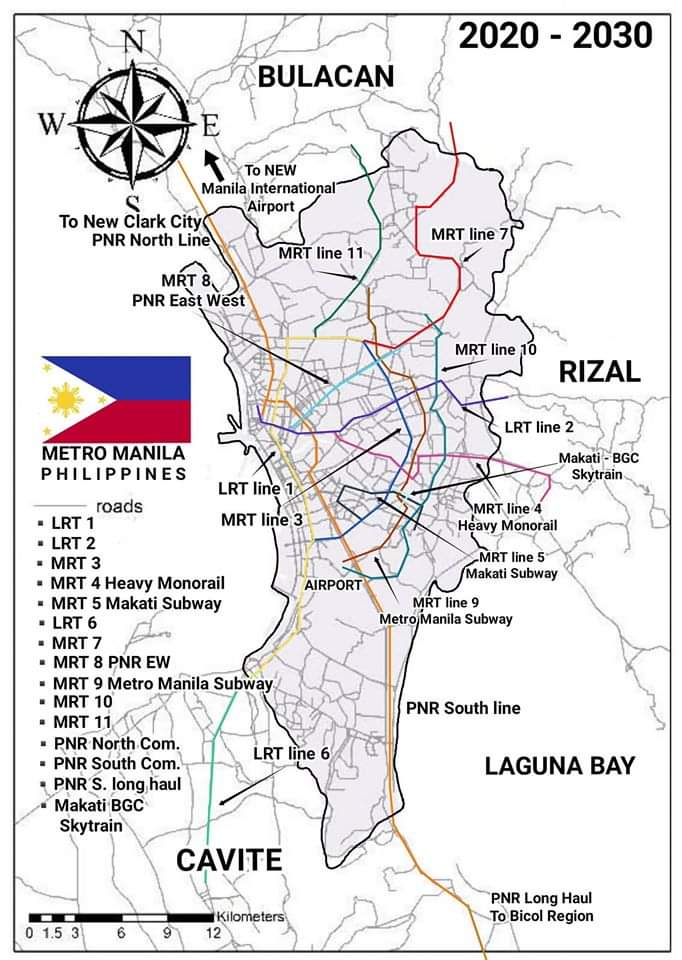 Duterte plans ‘Tokyo-style’ railway for Greater Manila – [07/03/19]
“The centerpiece of the plan is the country’s first subway line, modeled on Tokyo’s complex web of underground services. Along with a commuter rail service project and work to update a problem-stricken existing railway line, the public transit project will cost 1.17 trillion Philippine pesos ($22.4 billion) in total, funded in part by loans from Japan, with many Japanese players taking part in the efforts.”