The Makati-Taguig Skytrain is a proposed automated people mover line that will connect the city of Makati and Bonifacio Global City area in Taguig, Metro Manila. The line (which has also been referred to as a monorail) will be approximately 1.87 km with two stations. It will connect to Line 3 and the Makati Intra-city Subway at Guadalupe Station in Makati City to Uptown Bonifacio in Taguig, next to Uptown Station of the planned Metro Manila Subway Project. The line will form part of the expanded Metro Manila mass transit system.

Sign up for the Future Southeast Asia Newsletter to get updates on the Makati-Taguig Skytrain and other mass transit lines in Metro Manila. 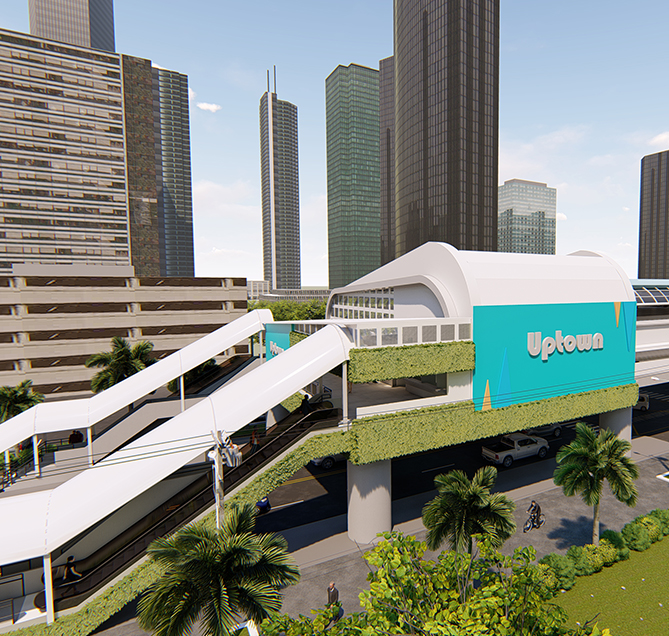 Fort Bonifacio – Makati Skytrain Feasibility Study – [09/09/18]
“The project consists of a 1.873-km public transit system between the vicinity of the Line 3 Guadalupe Station and Fort Bonifacio (Uptown Mall area). It generally follows the existing roads within the vicinity i.e., J.P. Rizal Avenue, Lawton Avenue, 8th Avenue, and 38th Street. The technology adopted for this project is an Automated People Mover (APM) with two (2) stations at each end and operating at a maximum speed of 40 to 50 km/h.”

Groundbreaking for Skytrain seen in H2 – [04/03/20]
“Infracorp Development Inc., the infrastructure arm of Andrew Tan-led conglomerate Alliance Global Group Inc. (AGI), is looking to break ground for its Makati City-Taguig City monorail project by the second half of 2020.”

AGI to break ground for Makati-Fort Bonifacio monorail Skytrain in January 2020 – [21/06/19]
“Alliance Global Group Inc.’s (AGI) infrastructure arm Infracorp Development Inc. is eyeing to break ground for its two-kilometer Skytrain monorail project by January next year as the company is confident it can best potential rivals in a Swiss Challenge.”

Philippine conglomerate pitches monorail in congested Manila – [11/10/17]
“Alliance Global told the local stock exchange it submitted an unsolicited proposal to the government to build Skytrain, a monorail that will link its township Uptown Bonifacio development in Taguig City to a Metro Rail Transit station in Makati City.”