The Makati Intra-city Subway (MkTr) is an under-construction underground rapid transit line in Makati, Metro Manila. It is being built under a public-private partnership program between the Makati City Government and a private consortium, led by Philippine Infradev Holdings.

The line will have nine stations and 10 km in length. There will be connections to MRT Line 3, Pasig River Ferry Service, Metro Manila Subway (under construction), and potentially to the proposed SkyTrain between Makati and Bonifacio Global City in Taguig, Metro Manila.

MkTr (designated as Line 5) was originally planned to end at Ayala station on MRT Line 3, but it has since been rerouted to the location at the Mile Long Property in Amorsolo.

The project is expected to be completed by 2025 and it is projected to carry 700,000 passengers per day. 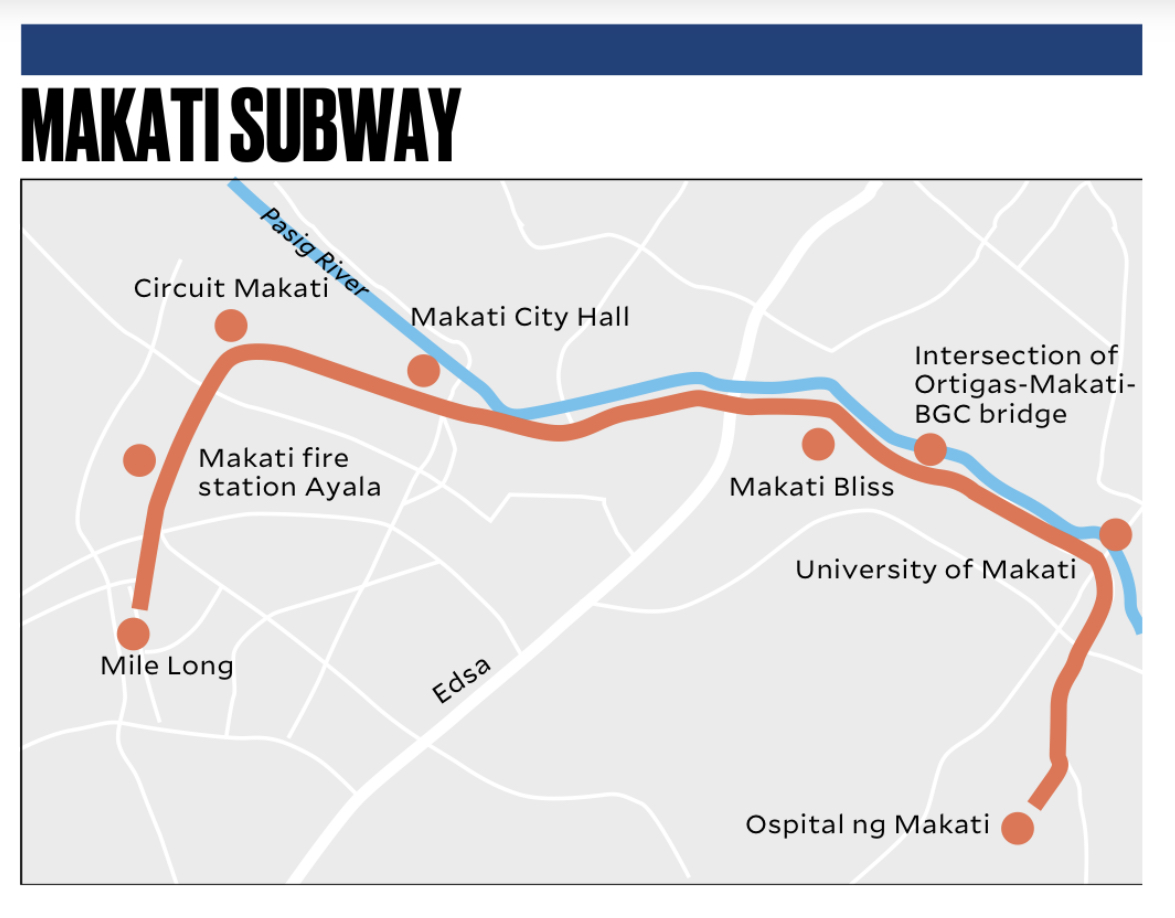 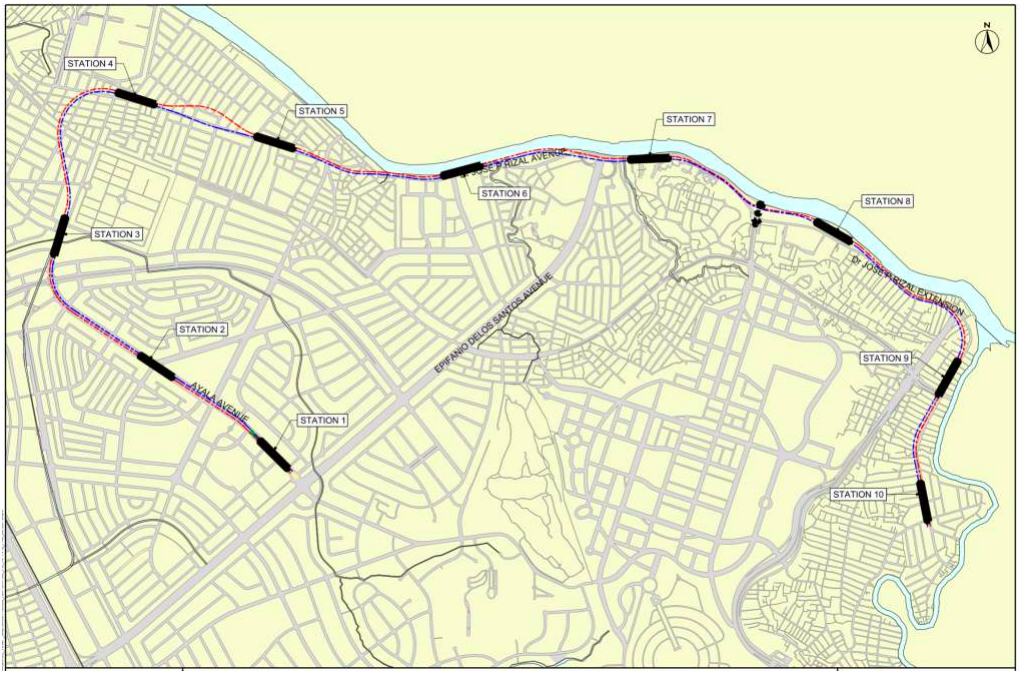 [Similar map to the one in the Executive Summary PDF.]

Makati mayor: Subway project expected to be completed by 2025 – [18/05/22]
“The Makati Subway project, the first of its kind in the country, will be built at no cost to the city through a Public-Private Partnership agreement. From its construction phase to its full operation, the subway is projected to create 10,000 jobs for city residents.”

Makati starts hiring for subway project – [04/11/21]
“Almost three years after the groundbreaking of the P192-billion Makati subway, the city government announced the opening of the first wave of job opportunities for the ongoing project.”

Makati passes right-of-way ordinance for subway project – [25/10/20]
“The Makati City government has passed an ordinance authorizing the acquisition of right of way covering the underground portions of nine roads affected by its subway project with Philippine Infradev Holdings, Inc.”

Chinese firm to build Makati subway – [10/09/20]
“The contract covers civil works alongside mechanical, electrical and plumbing (MEP) works. The civil works alone were valued at $978.6 million while the MEP portion was priced at $234.16 million.”

Makati subway to link up with Megaworld’s Skytrain – [13/12/19]
“The proposed Makati City subway will soon be connected to the planned monorail being built from the Guadalupe Metro Rail Transit (MRT Line 3) station to Megaworld Corp.’s township in Taguig City.”

Gov’t urges Makati LGU to include Mile Long in subway route – [26/08/19]
“The Department of Finance’s (DOF) privatization office is requesting the City of Makati to include the government’s Mile Long property in its subway project.”

What you need to know about the Makati City Subway – [30/07/19]
“Philippine Infradev President and CEO Antonio Tiu recently announced the completion of a six-month soil testing along the proposed alignment of the 10-kilometer intracity subway system “with no adverse findings.””

Makati Subway can move ‘faster than expected,’ proponent says – [03/07/19]
“IRC Properties is working with the Makati City government first before expanding it to as many as 3 other cities, president and CEO Antonio Tiu said.”

Infradev to pursue projects to complement Makati subway – [03/06/19]
““We are going to build about 6.4 million square meters (sq.m.) of property over the next 15 years,” Philippine Infradev President and Chief Executive Officer Antonio L. Tiu told reporters last week, adding that each subway station will have between 5,000 sq.m. to a hectare of leasable area.”

Chinese investment fund joins $3.7-B Makati subway project – [28//01/19]
“A Shanghai-based investment fund would infuse equity in the subway project of the Makati City government and Philippine Infradev Holdings Inc. — one of several Chinese firms that will help bankroll and build the $3.7-billion mass transit system of the country’s financial capital.”

Makati signs MOU to prepare building PH’s first subway system – [13/12/18]
“Makati City signed a memorandum of understanding (MOU) Wednesday, December 12, with the company that will do the preparatory work for the ambitious $3.7-billion subway project.”

Soil tests begin for $3.7-B Makati subway project – [13/12/18]
“The six-month geo-testing involves boring small holes and getting soil and rock samples for analysis from at least 200 points along the proposed subway alignment. The process will last for six months and is part of preliminary works prior to official groundbreaking.”

Makati subway to break ground by December – [27/08/18]
“The unsolicited proposal, which was submitted to the City of Makati last May, will connect key points in Makati City such as the current Central Business District along Ayala Avenue, the Makati City Hall, the Poblacion Heritage Site, the University of Makati, Ospital ng Makati and the other new business districts within the city.”

Makati subway up for ‘Swiss challenge’ says proponent – [24/07/18]
“A “Swiss challenge” happens when competing bids are sought for an unsolicited proposal for a government project.”