LRT Line 1
Roosevelt station is the current terminus at the northern end of LRT Line 1. The line will be extended to its new terminus at Unified Grand Central Station.

MRT Line 3
North Avenue station is the current northern terminus for MRT Line 3. The station will become part of Unified Grand Central Station. It had previously been proposed to unite LRT 1 and MRT 3 as one line, but they are run by two different operators.

MRT Line 7 (under construction)
Unified Grand Central Station will be the southern terminus of MRT Line 7. The line is planned to be extended to the New Manila International Airport.

Metro Manila Subway (under construction)
The North Avenue station of the Metro Manila Subway is an underground station, and it’s the only through service of the four lines. It will be connected to Ninoy Aquino International Airport.

This unofficial map of current and proposed railways in Manila gives the best overview of what the Unified Grand Central Station urban transit system will look like. 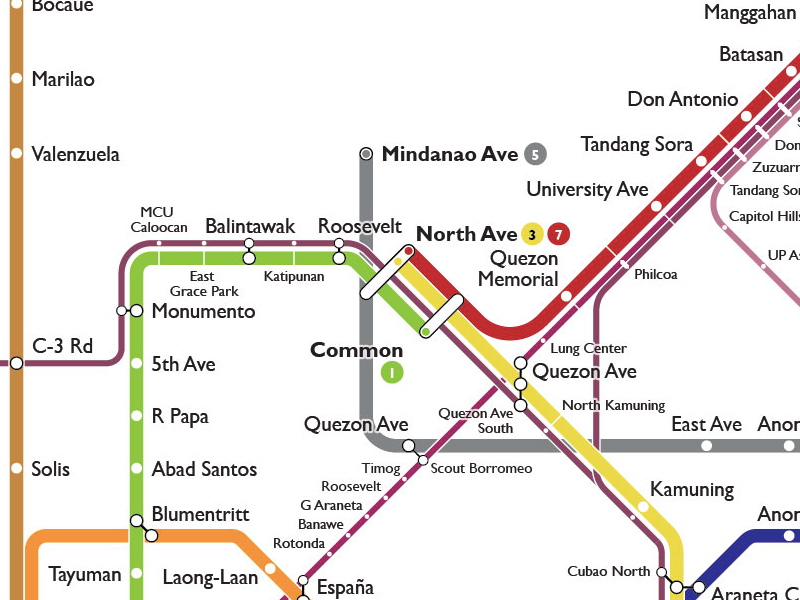 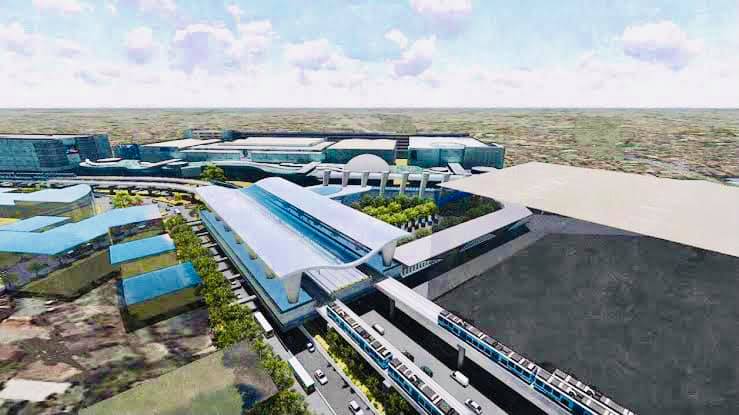 PH set to finish largest, most crucial train station by year’s end – [25/03/21]
“The Department of Transportation said on Monday the facility known as the common station project, located on North Avenue in Quezon City, has reached a completion rate of just under 50 percent.”

LOOK: The Common Station is almost halfway done – [24/03/21]
“Finally, the Common Station is taking shape! The Department of Transportation declared its overall progress at 48.48% for the central train station in Quezon City today, March 24. And while it may have taken seven years to get to this point, the transport authority is confident the project will be finished in time for December 2021”. 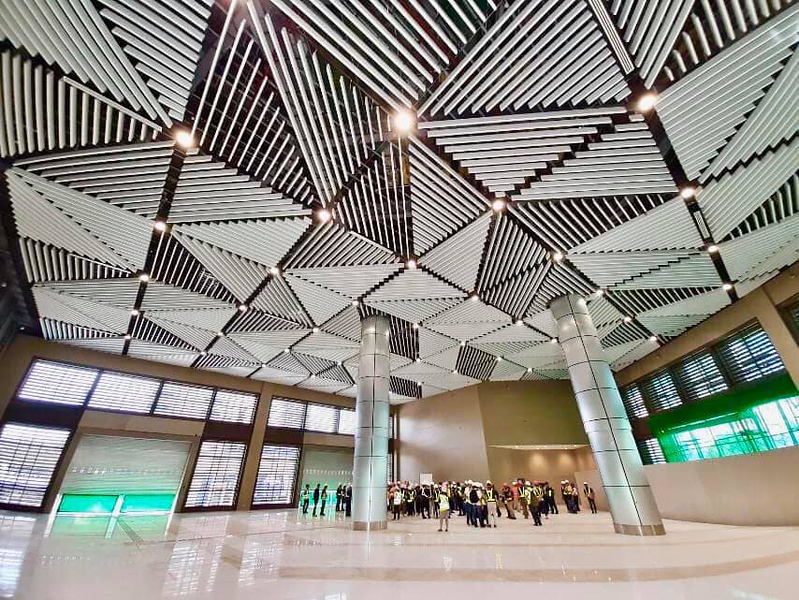 LRT-1 Roosevelt closed until Dec. for ‘common station’ works – [07/08/20]
“The Roosevelt station of the Light Rail Transit Line 1 (LRT-1) in Quezon City will be temporarily closed for about three months starting September to make way for the construction of the Unified Grand Central Station — also known as the “Common Station”.” 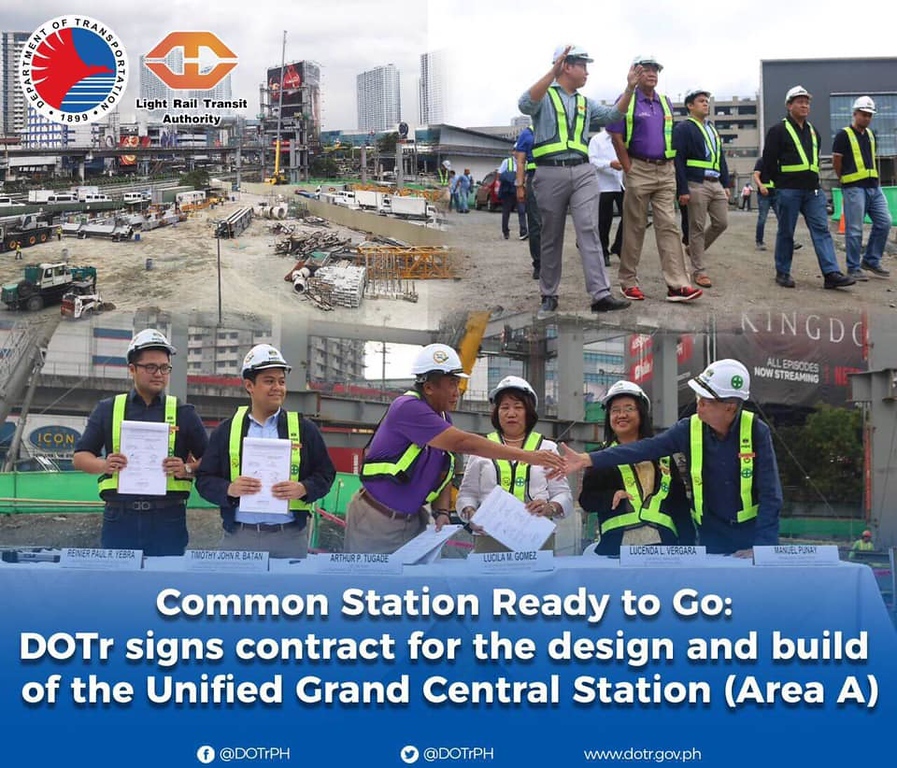 The station will link four major metro train systems: the MRT-3, LRT-1, the MRT-7 that is under construction and the Metro Manila Subway, which was greenlit for construction on September 14.”

What will the MRT-LRT common station be called? – [19/01/17]
“Department of Transportation (DOTr) spokesperson Cherie Mercado said both SM North Edsa of the Sy family and Trinoma of the Ayala family, which fought over the common station’s prime location, have naming rights for the project. It would allow commuters to stroll between the two malls as it linked three of Metro Manila’s main railways.”

LOOK: DOTr bares proposed design of MRT-LRT common station – [18/01/17]
“The construction of the common station project for the Metro Rail Transit (MRT) and Light Railway Transit (LRT) will start December this year after the government and concerned agencies signed a memorandum of agreement on Wednesday.”

‘Common LRT-MRT station could cause public inconvenience’ – [12/10/16]
“…the ideal scenario is one where passengers can take a seamless ride and just transfer from platform to platform” where passengers would only have to transfer from platform to platform not where commuters would have to jump from mall to mall and walk a distance of at least 200 meters before being able to switch trains.”

Finally: A common station for LRT, MRT lines – [27/09/16]
“After seven years of wrangling and disagreements, stakeholders in the proposed common station for the LRT and MRT train lines finally agreed where the station should be built.

Both SM Prime Holdings, Inc. (SMPHI) and Ayala Land, Inc. (ALI) signed Wednesday the memorandum of understanding with transportation officials on the proposed LRT-1, MRT-3 and MRT-7 Unified Station, which will be built between SM North EDSA and TriNoma in Quezon City.”

SM, Ayala to end feud over common station – [09/09/16]
“The group of property and retail magnate Henry Sy is open to the idea of building two common stations to link three overhead railway lines in Metro Manila, instead of fighting with its rival over the location of one common station.”

After a year, LRT-MRT common station problem still unsolved – [25/11/15]
“Over a year since the High Court stopped the transfer of the site of the planned Light Rail Transit (LRT)-Metro Rail Transit (MRT) common station, the problem remains unsolved, hampering the construction of some badly-needed mass transit infrastructure projects.”

Pasay court rejects SM Prime bid for TRO on MRT-LRT common station – [02/07/14]
“The Pasay City Regional Trial Court (RTC) has denied SM Prime Holdings Inc.’s (SMPHI) petition for a temporary restraining order (TRO) that would have prevented the Department of Transportation and Communication (DOTC) and the Light Rail Transit Authority (LRTA) from “performing acts inconsistent with the terms of the memorandum of agreement (MOA) dated Sept. 29, 2009 for the construction of the LRT1-MRT3 and MRT7 common station in front of SM City North Edsa.””

Why SM is after the MRT-LRT common station – [14/06/14]
“A legal battle has erupted between the government and SM, the country’s leading mall and retail group, over the P1.4-billion “common station” that will allow easy transfer of over a million passengers taking Metro Manila’s rail systems – the Light Rail Transit (LRT) and Metro Rail Transit (MRT) – every day.”

Manila commuters’ nightmare: SM City ‘grand central station’ plans for MRT and LRT lines now in pieces! – [12/06/14]
“What was once a grand plan to construct what could have been considered Manila’s first true “Grand Central Station” near SM North EDSA Mall has stalled and has literally broken up into little pieces that will leave commuters, as usual, grasping the short end of the stick. The station would have linked tracks being built under the LRT1 North Extension, MRT Line-3, and MRT Line-7 Projects into an integrated rail junction housed within a single building.”

DOTC: 7 major transport projects get green light from NEDA – [22/11/13]
“The DOTC will also now begin working on the Common Station project, which will connect the LRT-1, MRT-3, and future MRT-7 lines in the EDSA-North Avenue area.”

Manila LRT1 extension, operations and maintenance project [PDF] – [June 2012]
B. North Extension Project
“In July 2008, construction of the LRT1 North Extension project commenced which extended the LRT1 system by an additional 5.7km from Monumento up to North Avenue in Quezon City. The north extension includes three additional stations at Balintawak, Roosevelt, and a common station near North Avenue to connect with the existing Metro Rail Transit 3 (MRT3) line and the planned MRT7 line. At present, however, only the Balintawak and Roosevelt stations are operational pending a review of the design and exact location of the common station.”

DOTC reviews MRT-LRT central station project – [13/07/11]
“Transportation Secretary Manuel Roxas II wants the planned central station to be shared by several Metro Manila train lines to pay for itself by, among others, being built with store space that can be leased by store-owners.”