Khon Kaen is a province in the Northeast of Thailand (Isaan Region). The capital of Khon Kaen is one of the “Big 4” cities of the Isan (alongside Nakhon Ratchasima, Ubon Ratchathani, and Udon Thani).

The future Thai-China highspeed rail will stop in Khon Kaen, and the province also has the proposed East-West Economic Corridor railway passing through it. This will elevate Khon Kaen as a major transport hub of the region.

This page includes some of the construction and transport projects planned in the city and province of Khon Kaen. 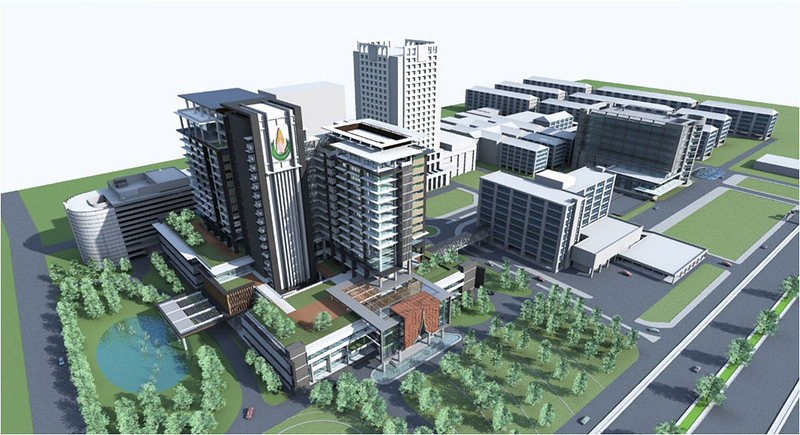 In order to help Thailand become the region’s medical hub, Srinagarind Hospital at Khon Kaen University is planning the construction of a 5,000-bed hospital, which would be Thailand’s largest center dedicated to medical specialities.”

Threat of new industrial park looms over the heritage of an ancient Khon Kaen town – [18/02/22]
“Residents are rallying against a proposed 4,000-rai bioeconomy project in Ban Phai district of Khon Kaen. The major concern is that the project might turn the area into a new pollution hotspot as in Rayong’s industrial estate Map Ta Phut. The project and its potential effects have aroused concerns that the environment might be damaged and the historical heritage of the ancient town, Mueang Phia, might suffer destruction.”

The Houze is a 37-floor apartment tower in the city centre. The podium includes a shopping area with cafes and restaurants. The building complex has the advertising tagline of “Live locally feel metropolitan”.

Property booms as Thais rush to rural Khon Kaen – [02/08/16]
“In the heart of northeastern Thailand’s largest city, a 37-story luxury condominium rises as a beacon of “vertical living,” as some locals describe it. All 414 units in this new condo, named “The Houze,” have been snapped up by residents with deep pockets who want to live in the tallest building in this largely flat cityscape of low-rise shophouses, commercial establishments, government offices and detached houses.”

Zenith eyes Houze in Khon Kaen – [05/02/13]
“Zenith Asset, a developer in Khon Kaen, has announced a 1.2-billion-baht condominium project to cash in on strong demand for high-rise units in the province.”

Bangkok-Nong Khai High-Speed Railway (also referred to as the Thai-Laos and China-Thailand Railway) is an under-construction railway that will connect Bangkok to the Vientiane Boten Railway. This will be built alongside the current metre-gauge Northeast Line that passes through Khon Kaen.

The journey from Bangkok to Khon Kaen currently takes about 7 hours to cover the 476 km distance. The high-speed train can travel at a speed of 250km/h, so it will bring the journey down to about 2 hours.

The East–West Economic Corridor Railway is a proposed railway that would travel from Myanmar to Vietnam, via Thailand and Laos. Each county has planned to build a railway that would eventually form a continuous line across the region. The Thailand segment passes through Khon Kaen Province on the way to Mukdahan, where it crosses the river to Savannahkhet in Laos.

The EWEC line will pass through Ban Phai (43 km south of Khon Kaen). The SRT announced in 2020 that it will requisition land for the Nakhon Sawan-Ban Phai and Ban Phai-Nakhon Phanom rail lines.

Khon Kaen has proposed to build a transit system including light rail and BRT lines. The first line to be considered is a north-south (Red Line) light rail.

Khon Khan has ambitions to secure international flights to its airport, including Singapore, Vietnam, and several cities in China. A new terminal began construction in 2018, but in a case of bad timing, it opened in 2021 in the midst of the pandemic. It remains to be seen when international travel will recover and international flights from Khon Kaen become a reality.

Conjuring the people: Entrepreneurial localism and the case of the Khon Kaen Model – [13/05/21]

Khon Kaen takes lead in Thailand’s race to smarten up – [14/10/18]
“Khon Kaen has been chosen to be the government’s model smart city for other provinces to learn from.”