The urban rail transit system of Bangkok is going through its biggest expansion since the BTS opened in 1999. Two commuter rail lines opened this year, two monorail lines are scheduled to open next year, and another new MRT line in 2023.

This is an annual summary of lines under construction, news for established lines, and planned lines that are making progress.

There are already some good maps showing what the future Bangkok transit system will look like, so I won’t make a map here. This map covers current and proposed railways that are mentioned in this post.

For station locations, the best map is the future map by BKK Greg.

There is no news on extensions to report this year, though there are still plans to extend the line in the future. The main news has been about ticket prices. There has been a proposal to charge fares on Green Line extension, on top of what is already an expensive line to ride for the average Thai worker.

In mobility access news, I’ve noticed several stations are in the process of adding lifts to the stations.

[Lift being installed at Phra Khanong.]

Accessibility to stations has been an ongoing battle. You can listen to Khun Saba talk about this on The Bangkok Podcast.

[Lift being installed at Phrom Phong.]

While there were no extensions on the Silom, a gap was filled at the BTS “ghost station” at Saint Louis.

When I visited Saint Louis they were building a convenience store inside the paid ticketed area. Most retail shops are outside the ticketed area. 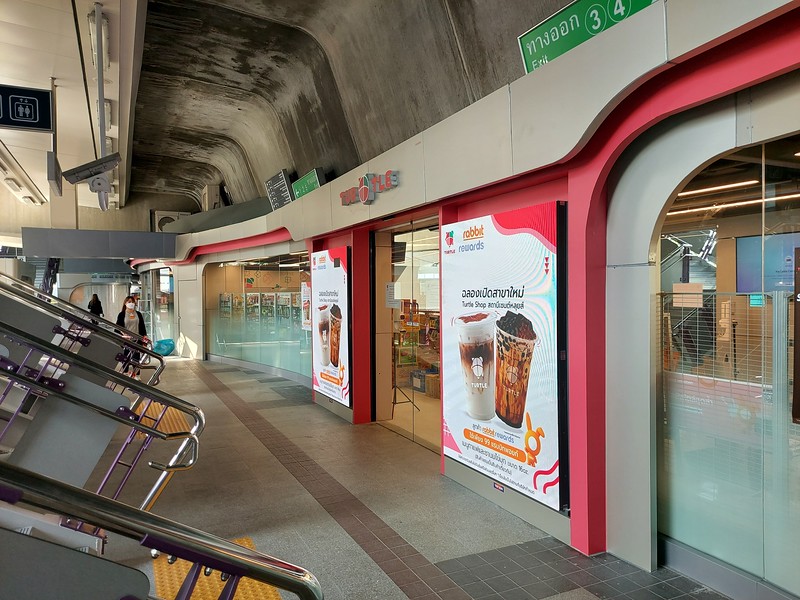 The Purple Line is set to be extended by 23 kilometres, and in November the MRTA was preparing to invite companies to submit a tender for the extension.

Both lines will be extended at each end, though work has not begun on those lines yet.

There are three new lines under construction, and two of those lines are expected to partially open in 2022. If all goes to plan, my 2022 report will include photos of the new lines.

In anticipation of the opening of the new lines, an updated system map can be seen at MRT stations. 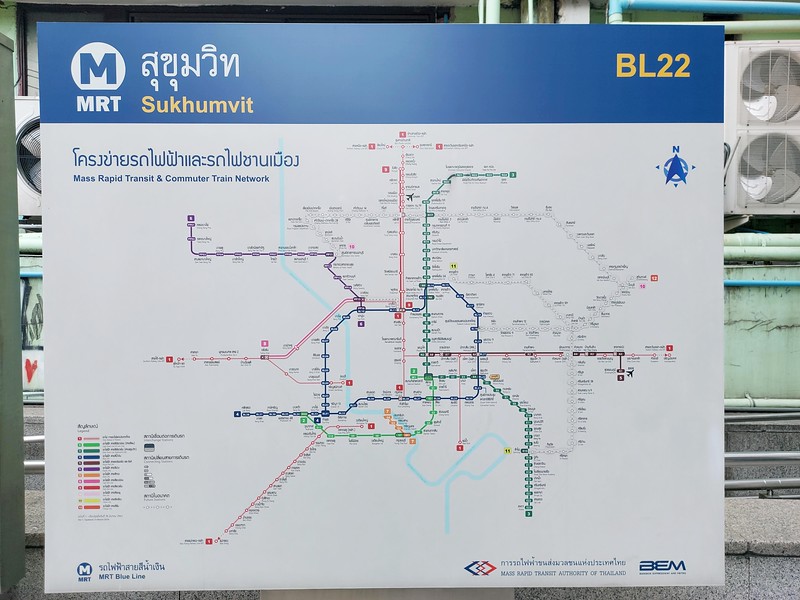 Stickers have been placed over the new lines, waiting for the day to be peeled off. Whoever has the job of peeling the stickers off is going to have the best job of the day, and I hope they upload a video of the unpeeling to oddly satisfying.

This one was already peeling, revealing the Pink Line underneath. 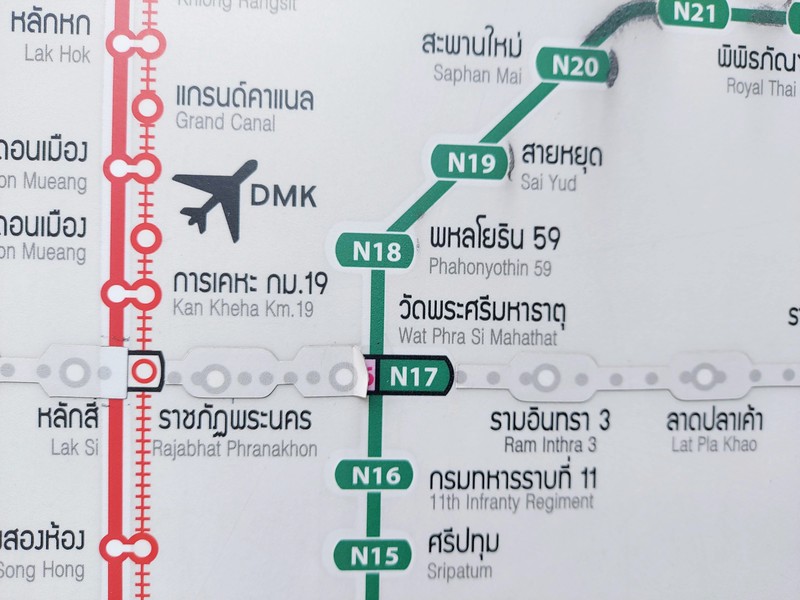 The MRT Orange Line is being built in two stages, with the 22.5km Eastern section from Suwinthawong to Thailand Cultural Centre currently under construction. The Eastern section is 88.46% completed as of the end of November 2021. There is a website dedicated to the Orange Line construction which shows this precise percentage update. 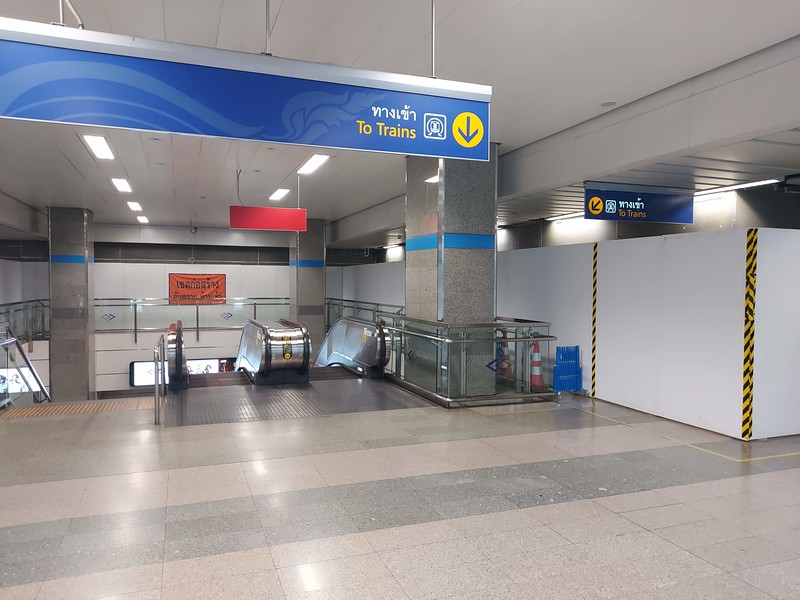 There is a worksite next to the Thailand Cultural Centre MRT for the Orange Line. 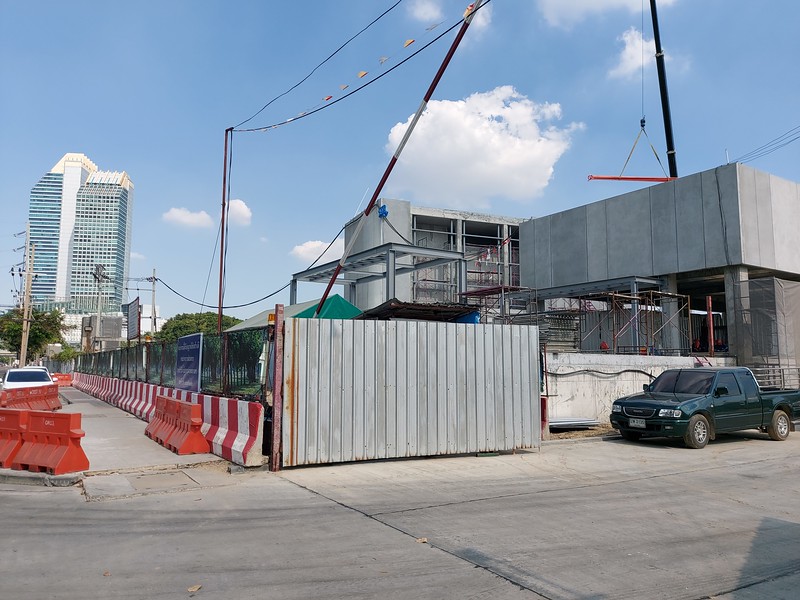 The Western extension has been delayed by a legal dispute over bid criteria. An update in September said the top court rejected the Orange Line bid suit.

It might be years before this is built, but that hasn’t discouraged developers from showing their apartment projects next to the future line.

The MRT Yellow Line is an elevated monorail that will travel across the northeastern and eastern areas of Bangkok. The 30.4 km line will have 23 stations and connect with 6 other lines. Test runs began on a completed section in November 2021, and the line is set to open in mid-2022 (as estimated in December 2021).

There is a dedicated website for the project, but unlike the Orange Line with its regular updates, the last monthly progress report was in March 2019. 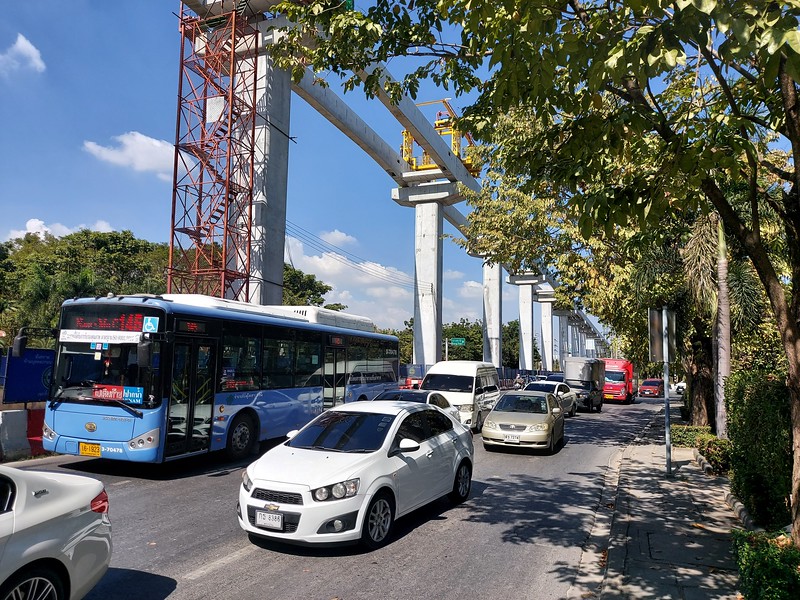 The Yellow line passes by the Airline Rail Link at Hua Mak, and it is being advertised as an interchange. 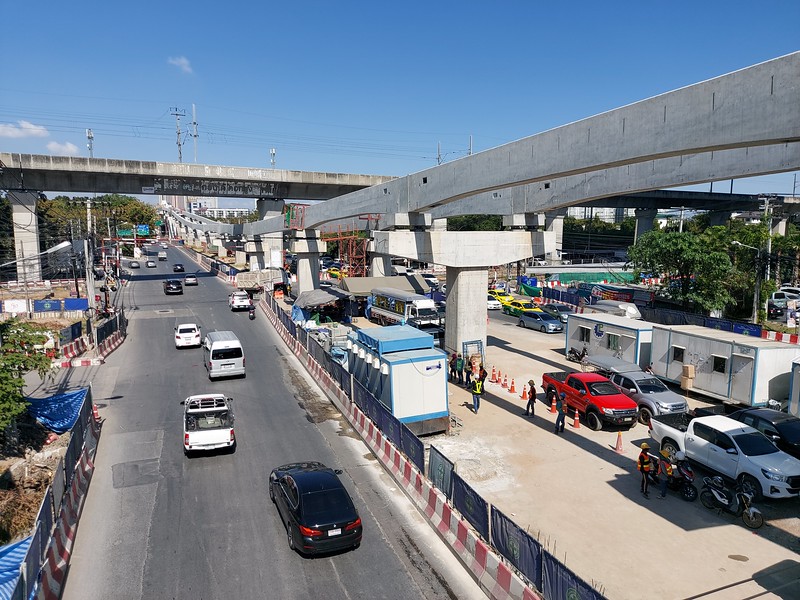 Phatthanakan Station is the station near Hua Mak ARL, but it is far from the station and there doesn’t appear to be an enclosed interchange between the two lines.

The same interchange problem will happen at Samrong, where it ends at the Samrong BTS on the Sukhumvit Line.

The MRT Pink Line is an elevated monorail that will provide east-west transport across the north of Bangkok and Nonthaburi Province. A section of the line is expected to open in June 2022.

There is also a dedicated website for the line at https://www.mrta-pinkline.com, but my antivirus software is blocking access to the site. The MRTA also has a Pink Line project page, which is a more typical Thai government website with tiny images and infrequent updates.

I visited Nonthaburi Civic Center MRT Purple Line Station, where the Pink Line starts. There doesn’t appear to be a step-free interchange within the ticketed area. I will write a separate post about the ticketing and interchange problems of the Bangkok urban rail transit system.

I visited Lak Si Station on the Dark Red Commuter Line. There is a walkway from the commuter line to the future Pink Line, but (surprise!) there is no step-free interchange between the two stations.

Here you can see the Pink Line going under the elevated Commuter Line, and above the old State Railway Line. 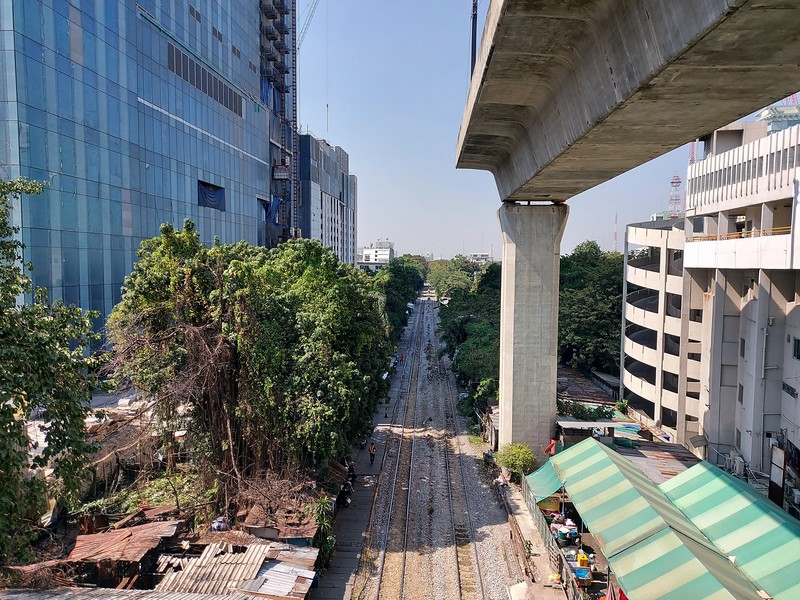 [Airport Rail Link at Phayathai will be extended to Don Muang from here.]

The Don Mueang–Suvarnabhumi–U-Tapao high-speed railway is being prepared for construction, with land clearance underway. The most recent government announcement said that the line will be ready in 4 years (2025).

[The empty Makkasan Station will benefit from the 3-airport railway project.]

There are numerous proposed lines in the system, some of which may not be started for years to come. This list covers proposed lines that made the news in the last year. 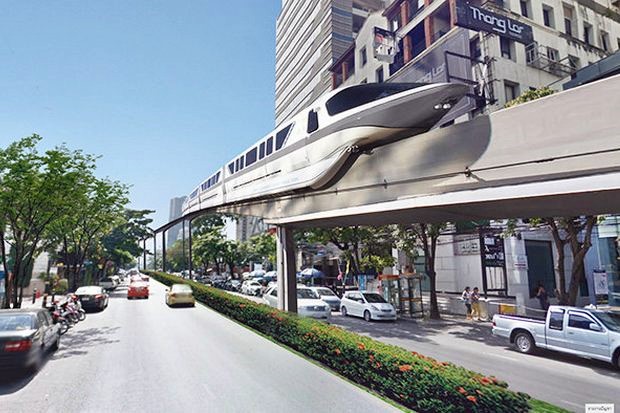 Bang Sue Grand Station is the new central station of Bangkok, which is set to replace Hua Lamphong Station. In addition to serving domestic and international railways, will also be an urban rail hub. The Red Lines depart from here, and there is a stop on the Blue Line MRT. The station will also be a stop on the 3-airport high-speed railway.

The station opened in 2021, not with a bang (sorry) but a whimper. The red lines began operations here, but the long-distance trains haven’t begun services as planned. That is probably a good thing anyway to get the station started gradually rather than trying to get it all operating at the same time.

I visited Bang Sue a few times to have a look around and ride the Red Line railways. 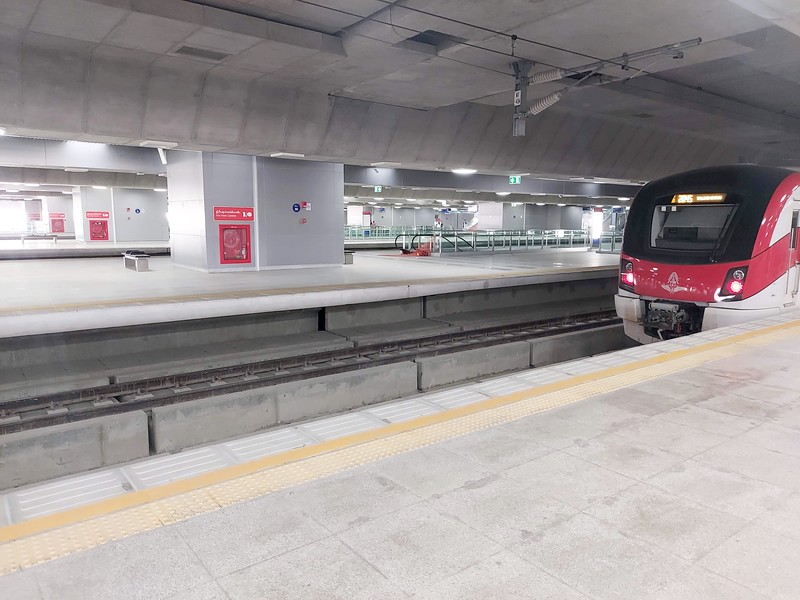 The station has been doubling as a mass-vaccination centre, so it is making the most of this massive space before it is fully operational.

I was going to do a review of the station, but I will wait until the services from Hua Lamphonog move here. There are still no shops here either, adding to the feeling that it is not fully open yet. It is strange that in a land with a 7-Eleven on practically every corner that there was no 7-Eleven here (unless I missed the corner where it was hiding). At least this vending machine operator will be happy for a while. 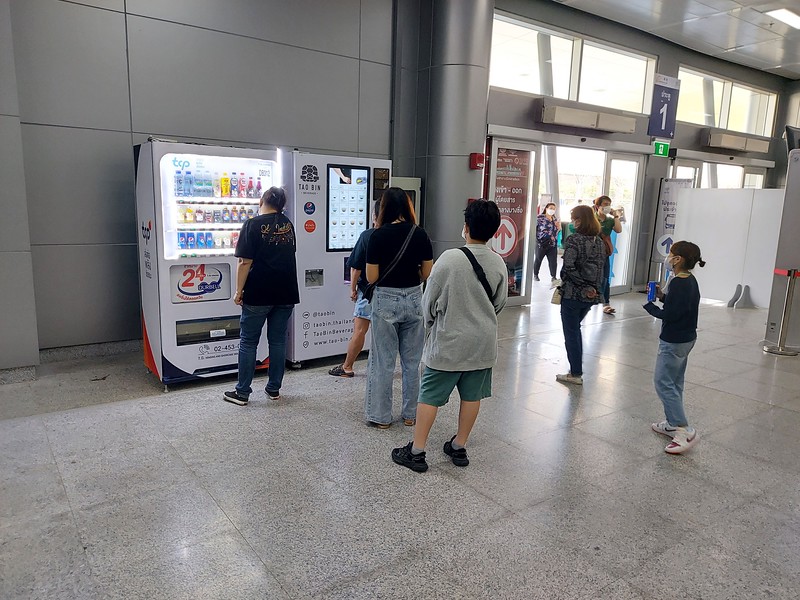 Another year has gone by and there is still no unified ticketing system for Bangkok. The Mangmoom Card is supposed to be the card that can be used on all lines, but it is still delayed.

The Bangkok Post published an editorial on the issue of a universal ticketing system, and I will publish separate article on this issue.