The Don Mueang–Suvarnabhumi–U-Tapao high-speed railway is a proposed railway that will connect the two airports of Bangkok with U-Tapao airport in the Eastern Economic Corridor of Thailand.

The rail link will be connected to what will eventually be the two biggest railway stations in Bangkok (Bang Sue Grand Station and Makkasan). The train will also have a stop at Pattaya, connecting Bangkok to the popular beachside city in under 1 hour.

The line length is 220 km, and it will run on a standard-gauge track. The train will travel at up to 160 km/h in the urban area between Don Muang and Suvarnabhumi, and up to 250 km/h between Suvarnabhumi and U-Tapao.

A high-speed railway to Pattaya was proposed in 2013, and from there it was expanded to include U-Tapao in Rayong as part of a grand Eastern Economic Corridor railway. In 2017 it was decided to extend the line from Makkasan to Don Muang, making it a 3-airport line. After years of planning delays the project was officially announced in 2019, and the target opening date is for 2023.

There is currently a rail service from Bangkok to Ban Phlu Ta Luang (near U-Tapao Airport) that stops at Pattaya. The quickest train takes 2 hours 28 minutes to go from Bangkok to Pattaya, and up to 4 h 25 min to get to Ban Phlu Ta Luang. This is much slower than a bus, and only runs twice a day in the morning, so it’s not a useful form of transport in its current format. This is a metre-gauge railway, so the high-speed railway will be using a new track.

As a high-speed service on a standard gauge, this will operate separately from the current railway.

Part of the route already exists with the Airport Rail Link from Phaya Thai to Suvarnabhumi. This is a standard-gauge railway, so it will only need minor modifications to integrate it into the new line.

The section from Don Muang to Bang Sue will use the railway that is currently under construction, and from Bang Sue to Phaya Thai there will need to be a new line. The line from Suvarnabhumi to U-Tapao will be new as well.

The high-speed stations include:

There will also be a stopping-all-stations service that will service the stations in between. This is similar to how the Airport Rail Link runs a city and express service.

Bang Sue Grand Station is the new central station of Bangkok that will replace Hualamphong Station. All regional and international trains will depart from here, so the new airport link will make it easier to transfer.

Makkasan is the biggest station on the current Airport Rail Link. It was designed so passengers could check in at the station and go straight to the airport on the express train. There is a similar service in Hong Kong, but this service didn’t catch on in Bangkok and the check-in area remains closed. 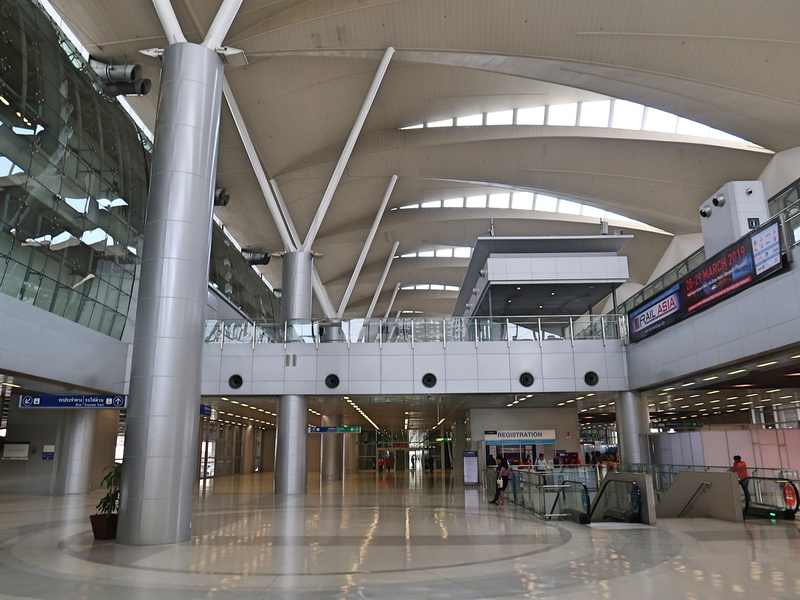 Part of the plan for this railway is to redevelop the area surrounding Makkasan. The area owned by the State Railway of Thailand, and this area is one of the prime undeveloped blocks in Bangkok. There have been different proposals, from building a new mini-city to creating a new city park. 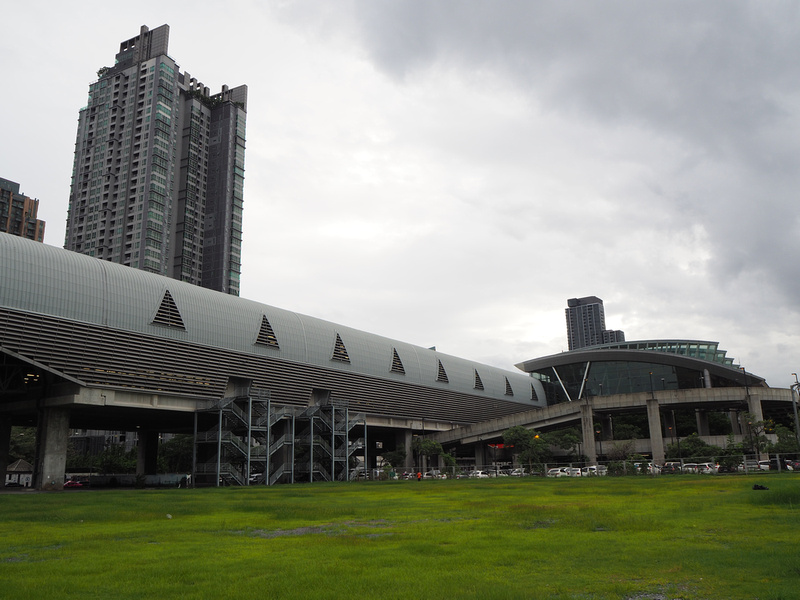 At Pattaya station there is a plan to build a monorail to the beach.

Some images of the proposed HSR station for Pattaya.

Development of the high-speed railway, the EEC, and the change of the landscape [PDF] – [19/03/18]
“Based on this conclusion, this study argues that the Bangkok-Rayong route will significantly change the EEC from a basic manufacturing sector to a manufacturing plus services sector, in which research & development (R&D) centers, testing and laboratories, data centers, back office functions, as well as services related to tourism will agglomerate.”

‘Billions saved’ in high-speed rail deal – [15/03/22]
“The State Railway of Thailand (SRT) has said it will now be able to save billions of baht in additional costs in the execution of a high-speed rail project linking Don Mueang, Suvarnabhumi and U-tapao airports.”

SRT ‘clears out’ illegal occupants along new airport route – [29/06/21]
“The State Railway of Thailand (SRT) says it has cleared out all people who were illegally occupying land along the planned high-speed train route from Suvarnabhumi airport to U-tapao airport, and that it is almost ready to hand over the entire construction site of this route to contractors.”

Thailand’s airport high speed rail project delayed – [31/08/20]
“”The budget to demolish infrastructure to make way for the new high-speed system has not been approved,” said SRT Governor Nirut Maneephan, “without the budget approval, then first phase of the rail construction will have to be delayed.””

The bullet trains to make Thais proud – [05/08/20]
“The company building a high-speed railway line linking Don Mueang, Suvarnabhumi and U-Tapao airports has invited experts from various fields to advise it on the best way forward.”

Cold water poured on rail projects – [28/07/20]
“The 101-billion-baht extension of the high-speed train system linking Suvarnabhumi, Don Mueang and U-Tapao airports may not be worth investing in, the State Railway of Thailand has said, citing findings from a market sounding exercise in a feasibility study on the proposed extension.”

Korea Rail Network Authority lands order to manage high-speed r​ailway in Thailand – [18/03/20]
“KRNA will manage a high-speed railway that is being built to link Don Mueang International Airport, Suvarnabhumi Airport and U-Tapao International Airport. It is scheduled to open in 2023. The total cost of the public-private partnership project is about eight trillion won.”

Deal inked for Thai high-speed rail linking 3 airports – [26/10/19]
“Thailand took a step closer to its high-speed rail project linking three airports in and near Bangkok with the signing of a public-private partnership (PPP) on Thursday.”

3-airport rail link hits another bump – [09/10/19]
“The signing of the 224-billion-baht contract between the State Railway of Thailand and Charoen Pokphand Group (CP) for the rail link between three international airports has run into another delay following the resignation of the entire SRT board.”

[An artist’s impression of the high-speed train for the track to be built by the Charoen Pokphand consortium connecting Suvarnabhumi, Don Mueang and U-tapao airports.]

Three-airport high-speed train project stumbles forward – [11/09/19]
“One of the delayed Thai high-speed rail projects is now closer to being inked by the State Railway of Thailand and CP Holding’s joint venture, once an agreement on some key details of the public-private partnership project are reached.”

Airport rail link timeline announced – [25/09/18]
“The contract for the high-speed railway set to link Don Mueang, Suvarnabhumi and U-tapao airports will officially be announced and signed by the winning bidder by next January, the State Railway of Thailand (SRT) has announced.”

How Thailand’s massive infrastructure project will create Asia’s next big innovation hub – [18/09/18]
Sponsored content by the Thailand Board of Investment, explaining the High-speed railway in relation to the new Eastern Economic Corridor (EEC).

No opposition to fast train linking three airports – [17/10/17]
“There has been no public opposition at hearings on a planned high-speed railway linking three international airports – Don Mueang, Suvarnabhumi and U-tapao, according to the project manager.”

[A map of the proposed route from Bangkok to Rayong.]

SRT to request funds for Pattaya-Bangkok high-speed rail line in Oct. – [11/09/17]
“The State Railway of Thailand next month will request 28 billion baht to construct a high-speed train line linking Pattaya with the region’s three main airports.”

Thailand mulls upgrading U-Tapao as Bangkok’s 3rd airport – [01/05/17]
“U-Tapao, which has one 12,000-ft. (3,500m) runway built by the U.S. during the Vietnam War, is two hours by road from the capital, but this travel time is expected to be reduced to less than one hour after a new high-speed rail link will be completed.”

Government says U-Tapao will be cornerstone of EEC – [20/03/17]
“The government will prioritize the development of U-Tapao airport as the cornerstone of the Eastern Economic Corridor, the new development zone east of Bangkok that will showcase Thailand’s advancing digital economy, along with a high-speed railway linking the area to Bangkok, the deputy prime minister in charge of the economy said last week.”

U-tapao, high-speed rail top list – [13/03/17]
“The government will move first with two transport projects – the upgrade of U-tapao International Airport and the construction of a high-speed railway – out of the five mega-projects under the Eastern Economic Corridor master plan.”

Rayong added to high-speed rail link – [13/05/13]
“Initial plans were to build a high-speed train from Bangkok to Pattaya, but Rayong would be added.”

High-speed train to Pattaya in 5 years – [11/03/13]
“The first high-speed train line to Pattaya is expected to begin by 2018 after the government opens a bid to build the service in September, a senior Transport Ministry official said on Monday.”