Bang Sue Grand Station (officially known as Krung Thep Aphiwat Central Terminal) is the new central railway station of Bangkok. The station will be the terminus for all current long-distance rail services and future high-speed railways, and through-trains for the SRT commuter lines and 3-airport HSR line. It is also connected to the mass transit railway of Bangkok via the MRT Blue Line.

Bang Sue is the largest railway station in Southeast Asia. The terminal building has four levels, with 12 platforms and 24 tracks:

Bang Sue Area The New CBD & Transport Center – A powerpoint presentation showing what the future area might look like. 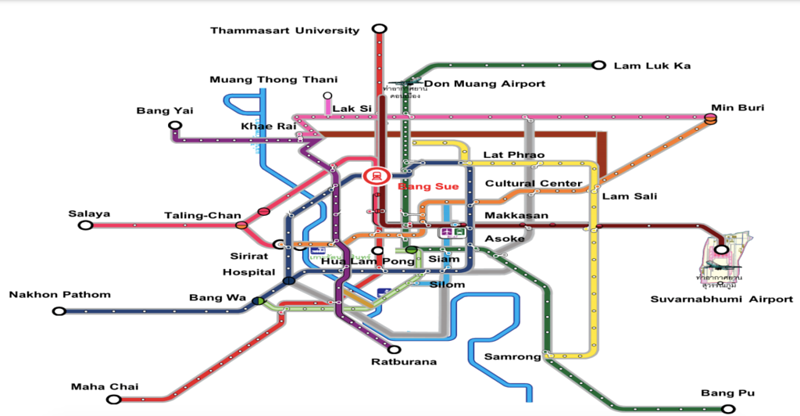 Probe of Bang Sue new logo concludes – [25/01/23]
“The “special” method used to hire a contractor for the nameplate and logo redesign of Bang Sue Grand Station was not appropriate, the probe into the issue has concluded.”

Not all aboard – [21/01/23]
“People make their way to a train at Krung Thep Aphiwat Central Terminal yesterday, the first day all long-haul trains were to depart from the new station instead of the old Hua Lamphong station. Ordinary, commuter and excursion trains will continue operating from Hua Lamphong.”

Bangkok’s new train terminal offers hope for end to traffic woes – [21/01/23]
“One of Southeast Asia’s largest train stations fully opened for business Thursday around 10 kilometers north of central Bangkok in a development that the authorities hope will ease traffic in Thailand’s busy capital.”

Commuters face railway woes – [20/01/23]
“The State Railway of Thailand made a big change in its 126-year history on Thursday when the SRT moved the operation of long-distance train services to the North, Northeast and South of the country from Hua Lamphong station to Krung Thep Aphiwat Central Terminal, formerly known as Bang Sue Grand Station, in Chatuchak district.”

Train station’s opening in Bangkok ushers in new travel era – [20/01/19]
“Thailand ushered in a new age of train travel on Thursday as Southeast Asia’s biggest railway station officially began operations. The government says the huge, modern development on the edge of central Bangkok will bolster the country’s position as a regional hub and boost its economy.”

New central station to boost hub dream – [18/01/23]
“Moving almost half of all long-haul train services from Hua Lamphong Station to Krung Thep Abhiwat Central Terminal will help the country realise its goal of turning the terminal into the biggest rail hub in Southeast Asia, according to deputy government spokeswoman Rachada Dhnadirek.”

New rail station ‘not quite ready’ to handle all services – [17/01/23]
“The State Railway Workers Union of Thailand is calling on the government to defer the plan to move almost half of all long-haul rail services departing from Hua Lamphong Station to Krung Thep Abhiwat Central Terminal this week, saying the country’s new rail hub isn’t ready to accommodate the services.”

Long-haul trains moving to new hub – [17/01/23]
“The decision to gradually move long-haul services to Krung Thep Abhiwat Central Terminal is in line with the State Railway of Thailand’s plan to turn the new station into the country’s primary rail hub under the Transport Ministry’s 20-year development strategy.”

Bang Sue plan gets no bids – [27/07/21]
“The State Railway of Thailand (SRT) has shelved its planned development of commercial space covering 32 rai of land at Bang Sue Grand Station after no private companies submitted bids for the project.”

One of the world’s most congested cities has big public transport plans – [18/06/21]
“Thailand’s government hopes a new Bangkok railway station can solve the city’s traffic woes.”

Bids for Grand Station development ‘next month’ – [03/05/21]
“The Transport Ministry is gearing up to call for bids for the commercial development of Bang Sue Grand Central Station, with invitations to tender expected to be issued next month.”

Bangkok, Bang Sue: too much, too soon – [05/03/21]
“What are the challenges for Bangkok’s largest state land auction, Bang Sue Grand Terminal, amid an oversupplied property market and the ongoing global pandemic?”

The terminal will be closed down as soon as the newly built Bang Sue Grand Station opens to the public, possibly in November, according to public transport authorities.”

SRT fails to attract any bidders for development of Bang Sue station’s Plot A – [19/01/21]
“The State Railway of Thailand (SRT) will have to adjust its development plan for the Bang Sue Grand Station’s Plot A now that nobody has shown any interest in bidding for the project.”

Thailand puts forward the next great leap: The largest railway station in Southeast Asia – [06/11/20]
Press release from the Ministry of Foreign Affairs, Thailand.

$1.3 billion transit hub could connect Singapore to China – [29/02/20]
“A city famous for traffic jams is looking to solve its congestion and pollution woes by building a massive train station and overhauling its rail network.”

The sign for the new Bang Sue Grand Station is looking good. Though it’s strange they used the word “grand” as the Thai name says “central”. Maybe a better English name would have been Grand Central Station. And better yet, use Bangkok instead of Bang Sue #รถไฟไทย #thaitrain pic.twitter.com/jP9TKBLjHX

Bang Sue hub beckons – [13/09/19]
“The development of Bang Sue Central Station, which will become Thailand’s new rail transport hub when it opens in 2021, is having a significant impact on the property market in the areas surrounding it.”

SRT opening bidding for Bang Sue plot – [29/03/19]
“The State Railway of Thailand (SRT) plans to open bidding next year for a mixed-use development worth 35-80 billion baht on 120 rai next to SCG’s head office in Bang Sue.”

Bang Sue Grand Station construction update – The future central station of Bangkok – [28/03/19]
This is a report from my visit to the construction site in 2019.

Bang Sue rail hub work on track, PM told – [21/03/19]
“Construction of Bang Sue Central Station, which will replace Hua Lamphong as the city’s rail transport hub when it opens in 2021, is almost 71% complete.”

Bangkok riding on grand station plan – [29/11/18]
“The surrounding areas of Bang Sue-Bang Pho interchange have become the latest destination of property companies amid high confidence in the government’s plan to develop Bang Sue as a grand station for rail transport systems in Bangkok.”

Bang Sue mega-station to operate by January 2021 – [23/11/18]
“Bang Sue Central Station, which is set to replace Hua Lamphong as the capital’s main rail transport hub, will be operational by January 2021, says Worawut Mala, acting governor of the State Railway of Thailand (SRT).” 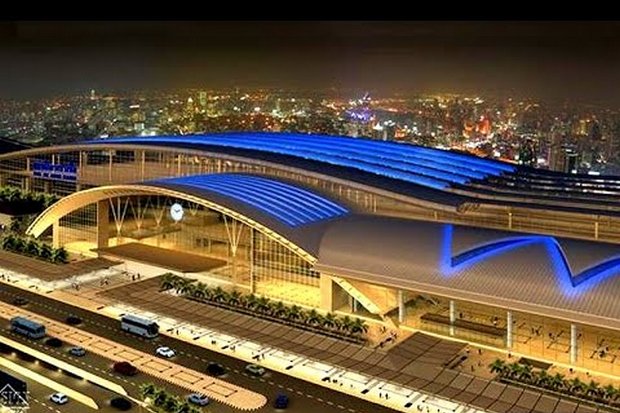 Four-storey Bangkok Bang Sue station takes shape – [03/10/18]
“Construction of a new passenger hub for Bangkok is around 70% complete and on course for opening towards the end of 2020, according to municipal officials.”

Thailand expects to open Bangkok’s new railway station in 2020 – [28/05/18]
“The State Railway of Thailand (SRT) has said that the Bang Sue Grand Station of Bangkok, the largest of its kind in Southeast Asia, is expected to open to public in the third quarter of 2020.”

The Transport Ministry approved the relocation of the interprovincial bus hub on Friday, according to Deputy Minister Pichit Akarathit .

The station is now part of the area designated to be developed into the Bang Sue central station, touted as the rail transport hub in the future and replacing Hua Lamphong.”

SRT opens bid for Bang Sue – [09/10/16]
“The State of Railway of Thailand plans to open bids for the commercial development of land plots at Bang Sue Grand Station worth about 9 billion baht early next year.”

Private sector gets huge chunk of Bang Sue railway hub – [06/08/15]
“The State Railway of Thailand will allow private sector participation in a multibillion-baht commercial development of 200 rai of land at Bang Sue train station in Bangkok, where a major transport terminus is planned.”

Big boost for Bang Sue – [06/08/15]
“More than 200 people took part in a marketing seminar yesterday to discuss the commercial development of a 218-rai empty land plot in Bang Sue district.”

SRT plans multimodal hub at Bang Sue – [02/10/14]
“State Railway of Thailand has reactivated long-standing plans to develop land around Bang Sue station on the northern edge of Bangkok under a property deal aimed at reducing the company’s debt pile.”

SRT inks deal for Bang Sue rail terminus – [19/01/13]
“The State Railway of Thailand (SRT) yesterday signed a multi-billion-baht contract for the construction of a new railway terminus and depot in Bang Sue.

The project is expected to be completed in two and a half years.”

Giant transport hub planned – [14/11/12]
“The government is being urged to get behind a new, but expensive, project: the Phahon Yothin Transport Complex.”