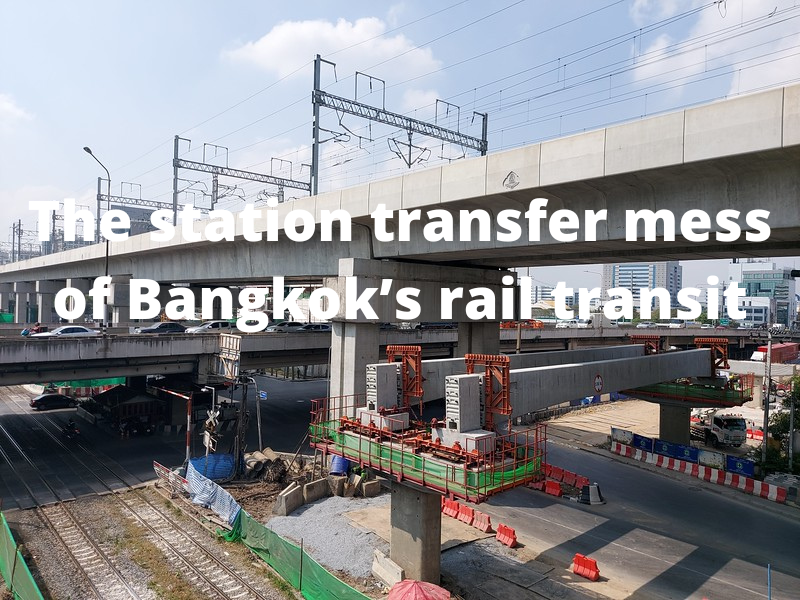 Bangkok is working towards building an urban rail transit system that will meet the needs of the people of this megacity. There are now 8 lines that make up the metro system, with 3 lines under construction, and more lines planned.

Unfortunately for Bangkok, the system currently has three operators that are not compelled to build integrated transfers between stations. Instead of being able to transfer from one line to another within a paid ticket transfer area, most transfers will involve going outside the station to get to the next platform.

One of the best metro interchanges in Southeast Asia

Bangkok’s urban rail transit system got off to a great start with the Siam interchange for the two BTS lines. This is the perfect model of what an interchange between two lines should look like. The converging lines of Silom and Sukhumvit are arranged to provide a cross-platform interchange in the same direction.

Siam is built above ground, so you can see how the four lines switch positions to make the interchange work. The two lines were built at the same time by the same company, so Siam was purpose-built for this interchange. 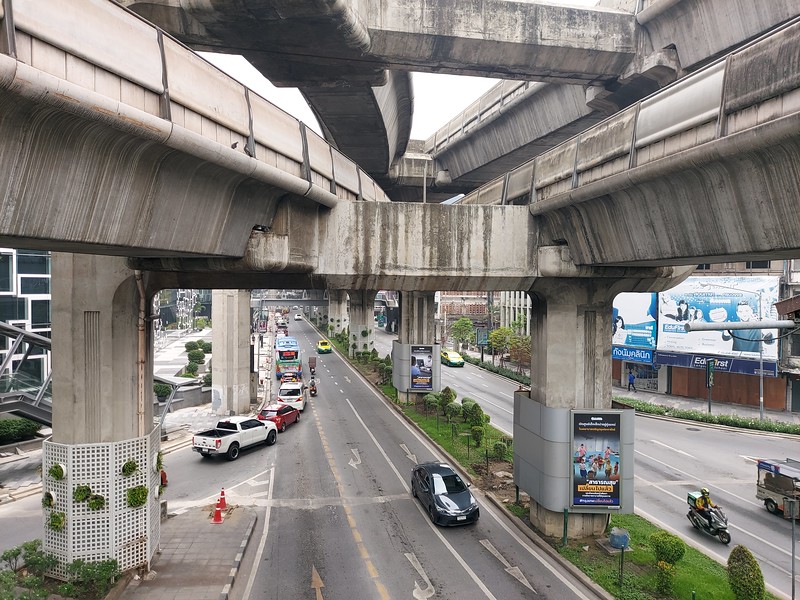 Two of the worst metro interchanges in Southeast Asia

From this ideal interchange, Bangkok then showed how not to do an interchange when the MRT Line opened. The MRT is an underground line built by a separate company to the BTS. When MRT first opened there were interchanges at Asoke BTS (Sukhumvit MRT) and Sala Daeng BTS (Silom MRT).

At these stations, you can experience the worst of Bangkok’s interchange planning. The interchange requires you to exit the ticketed area of one system, walk to the next station and then enter a new ticketing system. 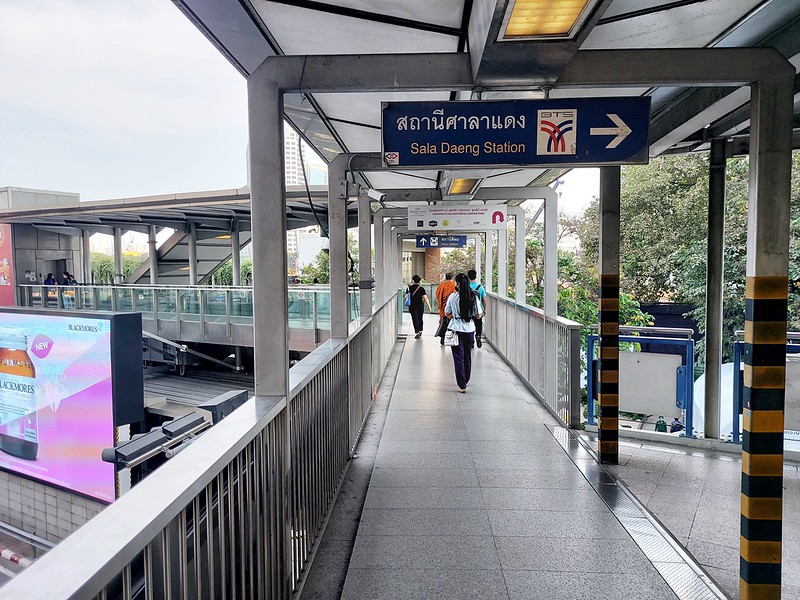 [Aboveground Asok BTS and the walkway to the underground Sukhumvit MRT.]

Instead of building transfer stations like Siam, there are now more stations planned that are not connected to each other.

All the lines under construction can be viewed on the official “M-Map” (20-year Mass Rapid Transit Master Plan for Bangkok Metropolitan).

Most of the new transfer stations are unpaid area transfers (denoted with dotted lines).

I visited some of the new and under-construction stations to see what the transfers are like between each operator. Most of these visits were at the start of 2022.

The first station I visited was Hua Mak. I was curious about this interchange because the under-construction yellow line is visible from the Airport Rail Link.

Hua Mak was already a terrible interchange because the Airport Rail Link was built on the other side of the road to the Hua Mak SRT station.

Phatthanakan Station is the Yellow Line station near Hua Mak. It is shown as a transfer station, though the stations are far apart with no walkway to connect them.

I visited Lak Si Station on the SRT Dark Red Line, which will interchange with MRT Pink Line. These are both new stations with intersecting lines that have been planned for years. Surely (I thought) there would be a step-free interchange that would facilitate a transfer between the two lines.

SRT Lak Si Station is a big station as it includes the future railways of the SRT lines to the north.

It doesn’t include integration into the Pink Line though, so passengers will have to exit one station to transfer to the other. 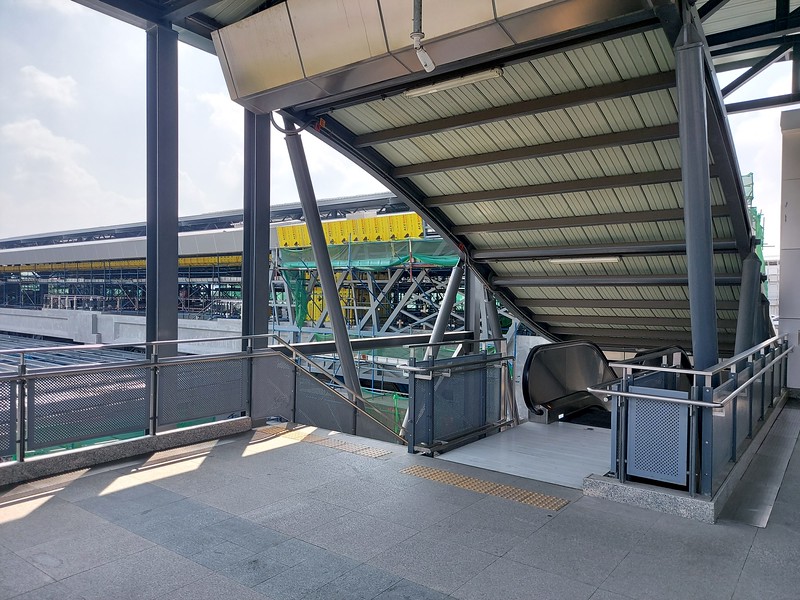 [Walk downstairs from SRT Lak Si to get to MRT Lak Si.]

Samrong Station on the BTS Sukhumvit Line will interchange with Samrong on the MRT Yellow Line. At least it appears that way if you looked on the map, and a sensibly-planned urban transport system would have required a step-free walkway to transfer between the two stations.

I got the BTS to Samrong and there you can see the Samrong Yellow Line station under construction. There is no walkway though, so passengers will have to go down to the street level and up to the other station to transfer (using different tickets).

Both lines have MRT in their title, though the Blue Line is a metro system that is mostly underground, while the Yellow Line is a monorail. They have different operators as well, so they have not built an integrated transfer area.

Lat Phrao Blue Line is a Park and Ride station, so there is a big car park attached to the underground station.

The M-Map makes the interchange look simple, but it is clearly not. At least the map at the Blue Line station shows that the two Lat Phrao stations are not connected. 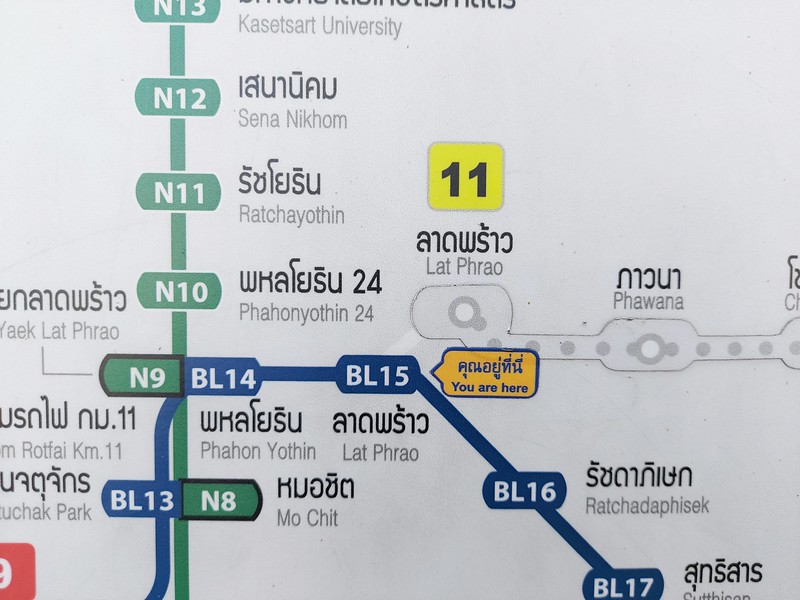 To repeat the point again – there are no paid transfer areas between any of the BTS/MRT/SRT stations.

Both of the Bang Son stations are elevated, and to get to either station you have to go outside the paid area, walk at street level, and enter the other station.

Nonthaburi Civic Center opened in August 2016 with the commencement of the MRT Purple Line. The MRT Pink Line will also “interchange” here, though the station has not been built to provide a true interchange. 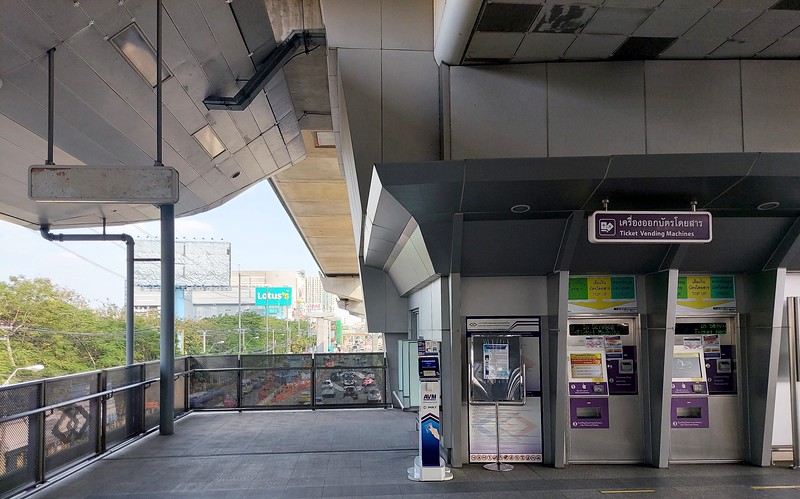 [Purple Line platform with the Pink Line construction in the distance.]

Sometimes a metro station will have a messy interchange because a previously unplanned line was added years after the first line was built. In this case, both lines were planned before the station was built, so they could have built an interchange station.

Even sadder is that there is another line planned to meet here (the MRT Brown Line monorail), so that will be another transfer where passengers have to leave one station and go to another.

[View of Pink Line construction while riding the Purple Line.]

Nonthaburi Civic Center station should have been built with 6 platforms in anticipation of the two new monorail lines that will meet the Purple Line. It could have been the Siam Square of Nonthaburi Province, with a new shopping area connected by walkways to the station. Instead, commuters from Nonthaburi who trek into Bangkok everyday will waste more time with this inconvenient transfer station.

Not learning from mistakes (or not caring anyway)

Bangkok is not the first city in Southeast Asia to have bungled interchanges of their first metro lines, and they probably won’t be the last (hello, Hanoi!) Kuala Lumpur is a good example of making a mess of interchanges with the Masjid Jamek interchange. Like Asoke/Sukhumvit and Sala Daeng/Silom, Kuala Lumpur had separate transit companies operating the two lines that interchange at Masjid Jamek. They operated separate ticketing systems, and you had to exit one ticketed area and enter another.

Kuala Lumpur has since gone on to fix Masjid Jamek by removing the barriers between lines and unifying the ticketing system. KL has also learned from their mistakes by building new stations that can interchange with other stations in the future. I wrote about the improved interchanges and connections of the KL metro transit system.

Bangkok, however, has not learned from its mistakes and is committing the same transfer errors. The main problem for Bangkok is that the different railway operators are putting their own interests before the city. They are private companies after all, and when you let the market decide, these companies decide that their shareholders come before the good of Bangkok. For example, the operator of the Yellow Line objected to connecting lines because they would lose revenue if they gave commuters an alternative connection on a line run by another company.

The simplest way to fix this is to write into law that all stations must have barrierless step-free interchanges. This is easier said than done when so many unconnected stations are already built, but they have to start somewhere.

This issue also ties in with the unified ticketing system, which is the topic for the next article on the urban rail transit system of Bangkok.