Thailand has been debating for decades the idea of digging a canal as a shortcut for shipping through the Strait of Malacca. With the renewed interest in the Thai Canal, there have been proposals to build a cheaper “land bridge” alternative. The Thai Land Bridge would ship cargo between ports on the Andaman Sea and the Gulf of Thailand via road or rail transport.

The Thai Canal and Land Bridge are expensive propositions, and it’s debatable if there would be a return on investment on a shortcut that is not saving much time.

Instead of Thailand trying to be an east-west shortcut by sea, Thailand should direct its resources into becoming Asia’s pathway to the West. This pathway would be the port in Ranong on the Andaman Sea being connected by rail to mainland Southeast Asia and Southern China.

The Thai Canal and Land Bridge

The main problem with the canal or land bridge as a shortcut is that it’s not going to save enough time once the canal crossing or cargo handling by land is taken into consideration.

With the time-saving advantage vs cost not being a strong selling point, the narrative to sell the project has moved to create a new trading hub that would rival Singapore. While it’s understandable to aspire to the wealth and modernity of Singapore, the fact is that geographically Singapore can’t be bested (unless Batam in Indonesia gets its act together).

The canal would be an enormously expensive project with no guarantee of it being a financial success. Building the Suez and Panama canals was an obvious choice given the weeks of travel time saved. For the Thai Canal, the cost vs time-saving is not as compelling. There is also the risk of Thailand being caught in a debt trap to the foreign lenders who wish to finance it.

The land bridge idea has been offered up as a cheaper alternative to the canal. While it’s a good idea to at least explore the idea, once you consider the logistics of moving cargo across the peninsula, it the case for it falls apart.

The land bridge involves building deep-sea ports on the Andaman and Gulf sides. The ships would have to dock, unload all of their containers either on land or directly onto a waiting train. The train (or trains) would then cross the peninsula and wait to be loaded onto another ship. It takes about a day to unload a container ship, and once you factor in transit time across the peninsula and reloading another ship, any time saved is lost, while the added expense of containers being handled multiple times has been incurred.

This would not save time either, though it is being promoted from the angle of turning Thailand into an oil storage hub. That would then require land to build oil storage facilities, and finding an appropriate port.

Ranong: Asia’s pathway to the West

Rather than trying to be an alternative sea transport hub to Singapore, Thailand should become the land-sea port for mainland Southeast Asia and China. Ranong would become mainland Asia’s pathway to the West.

To become Asia’s pathway to the West, there wouldn’t need to be too much changed to what is already being planned. The port of Ranong has already stated that this is their vision. This would be competing with Myanmar’s Dawei mega-project.

Part of the land bridge plan is to build a railway across the peninsula. There is already a railway being planned with the proposed Chumphon – Ranong Deep Sea Port Railway, which would connect to the main Southern Line at Chumphon. This would also provide the benefit of adding a new passenger railway service that could eventually be extended to Phuket.

The Southern Line is being double-tracked, so that will also help in making rail transport faster and more reliable. Freight coming from Ranong will not have to wait its turn at passing loops on the single-track railway, which is the current scenario.

A pathway to the west would involve transporting freight from Northern Thailand, Laos, Southern China, and eventually Vietnam once they get their railway infrastructure in order. This is already being prepared for as well, with the China-Laos railway and upgrade of the Bangkok-Nong Khai railway that will meet it.

Laem Chabang port in Chonburi Province is already preparing to connect to the Thailand-Laos-China railway. Laem Chabang is the largest port in Thailand, and it would become the eastern gateway for mainland Southeast Asia. There would be no need to build a new port at Chumphon.

Instead of spending money on the canal or land bridge infrastructure, the money could be spent on improving and untangling railway bypasses around Bangkok. The other crucial railway project is the East-West Economic Corridor railway, which would feed cargo into Laem Chabang and Ranong. 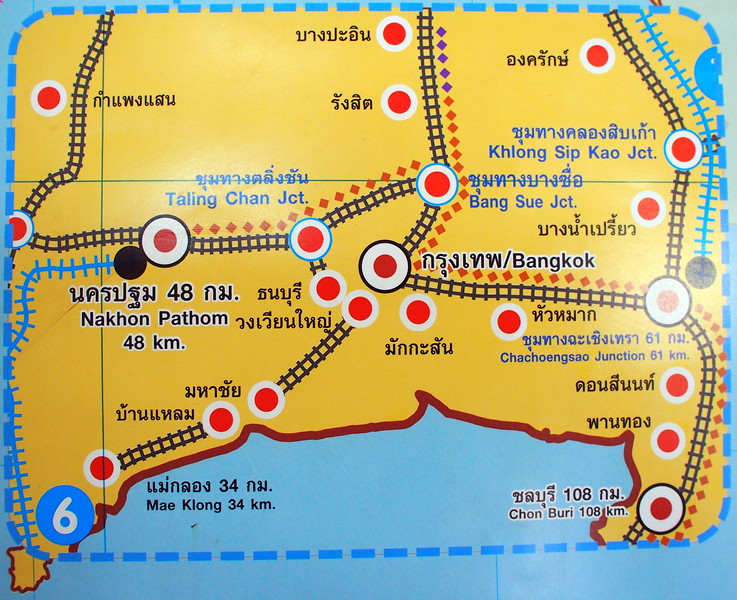 Improved railway infrastructure that goes around Bangkok would also cancel out the need for the Thai Bridge, the proposed sea bridge across the Bay of Bangkok.

Ranong as Asia’s pathway to the West would offer Thailand the most bang for its baht in terms of infrastructure spending. Instead of spending on the high-risk canal, the no-value land bridge, and the absurd Thai Bridge across the Bay of Bangkok, spend it on the Ranong-Chumpon railway, the East-West Economic Corridor Railway, and providing seamless connections between the ports and railways.