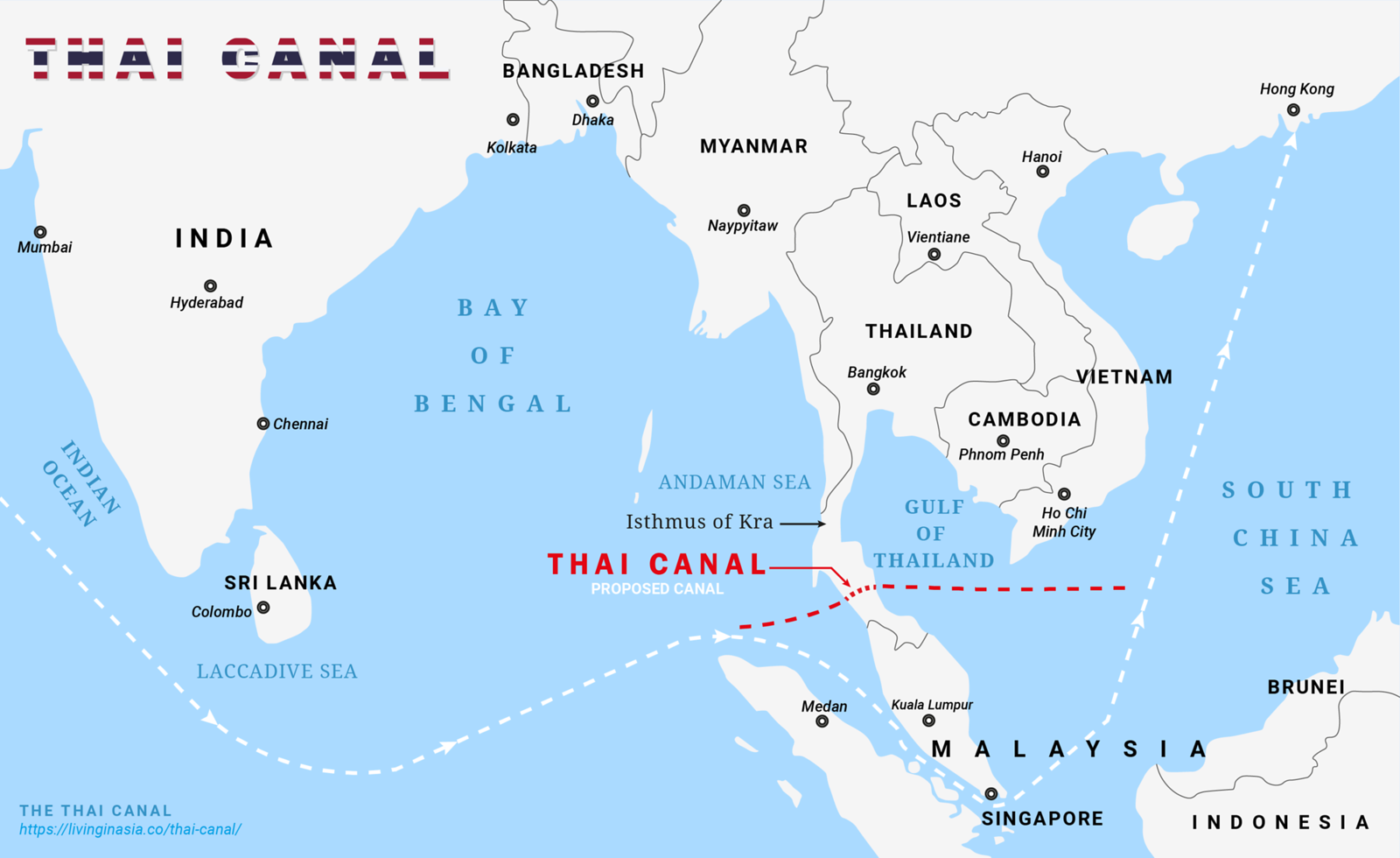 The Thai Canal (also known as the Kra Canal) is a proposed canal that would cut across the Malay Peninsula in Southern Thailand. This man-made waterway would connect the Andaman Sea with the Gulf of Thailand, providing a maritime shortcut by rerouting shipping away from the Strait of Malacca. The canal of approximately 100 km would save 1200 km on the current journey via Singapore.

The idea for a Klong Thai (Thai Canal) was first proposed by Thai King Narai in the 17th century, and the British East India Company showed interest in the early 19th century. The plan has been revisited over the centuries, but the financial and technical challenges involved in the project have kept it on the proverbial drawing board.

In modern times the canal has been given serious reconsideration by China, which considers the route as part of the 21st century maritime Silk Road.

Having access to this shortcut between the Indian and Pacific oceans fits in with the String of Pearls strategy, where China is establishing civilian maritime infrastructure around the Indian Ocean rim.

The Thai Canal would be comparable in size with the Suez and Panama canals. The Suez Canal is 192 km and the Panama Canal is 77 km, and the preferred route of the Kra Canal is 128 km.

While the Suez Canal was built over flat desert, the construction of the Panama Canal required locks to get ships over hilly terrain. The Kra Canal would also need locks, depending on the chosen route.

The Panama Canal was an enormous engineering feat, especially considering it was built over 100 years ago. Its construction had the added incentive of saving weeks of travel, while the Thai Canal would only save two or three days.

There are different routes that have been selected as potential corridors. The shortest route of 44 km also has the highest elevation, so there would be need to be locks to get the ships across the peninsula. This is at the Isthmus of Kra, where the Kra Canal name is derived.

The other shortest route is in the Deep South. This would cause the problem creating an artificial border just above the troubled three provinces of Southern Thailand.

The preferred route is known as 9A, a 128km route from Krabi province on the Andaman coast to Songkhla province on the Gulf of Thailand. This is not at the Isthmus of Kra, thus it’s more accurate to call it the Thai Canal.

[Route 9A (image via bangkokpost.com.)]

In addition to the enormous financial cost is the environmental cost as well. With canal being 400 metres wide and 30 metres deep, that’s a lot of earth that needs to be moved somewhere else. One suggestion was for a new island. The half-kilometre wide line across the peninsula would also restrict movement of wildlife on either side. And depending on the chosen route, ships might pass through national marine parks.

In lieu of a canal, Thailand started building a land bridge in the 1990’s with Highway 44. The highway has been built with enough space to include a railway and pipelines, though so far it is not connected to established ports. If this project was fully established it would be an alternative land bridge to the East West Economic Corridor.

The latest news had a call for another feasibility study in January 2020, so for now the project still lives on.

This page includes a news archive to record updates.

Thai canal plan won’t die, says activist – [07/02/22]
“The Thai canal project is unlikely to be put to rest, despite the House of Representatives last week rejecting a study into the proposal, says an activist working on environmental issues.”

Over land or sea?
“It could result in more earth being moved than both the Panama and the Suez canals combined – and it won’t pay for itself. Stevie Knight asks if the Thai Canal is still worth consideration?”

Controversial Thai Canal back in spotlight – [14/10/20]
“The 120-kilometre Thai Canal project running from Krabi on the Andaman Sea to Trang, stretching to Nakhon Si Thammarat and Songkhla on the Gulf of Thailand, recently returned to the limelight after decades of proposals.”

India sees debt diplomacy at play in China-backed Thai canal, finds talk of gains exaggerated – [04/10/20]
“The Kra canal project envisages a canal cutting across Thailand, and connecting the Gulf of Thailand to the Andaman Sea. It seeks to offer an alternative route to busy Malacca Strait.” 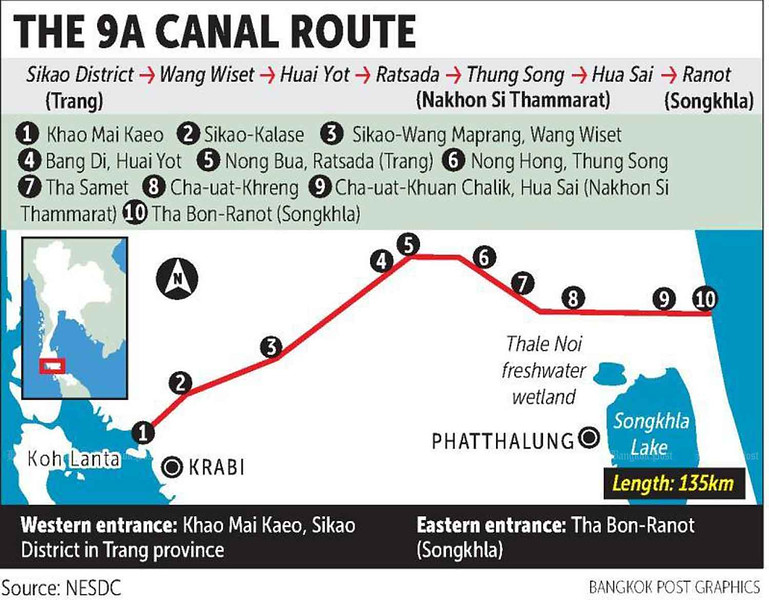 Canal conundrum – [28/01/19]
Thailand could sacrifice its sovereignty for questionable gains from Chinese–built waterway.

A 341-year-old idea whose time has come? – [08/11/18]
“Among many potential routes for the Thai-Kra Canal, ‘9A’ has become the most likely one if a green signal is given. The route is from Koh Lanta and Klong Thom districts of Krabi province on the Andaman Sea coast to the eastern seaboard in Songkhla province along the Gulf of Thailand.”

NESDB to study feasibility of Kra canal plan – [08/07/18]
“The National Economic and Social Development Board (NESDB) should be entrusted to study the feasibility of the Kra Canal plan which will connect the Gulf of Thailand to the Andaman Sea in the South, the Marine Department has suggested.”

Thailand’s Kra Canal: China’s way around the Malacca Strait – [06/04/18]
A 200-year-old dream might finally become a reality under China’s Belt and Road.

Centuries in the making: Will Thailand build a 100km canal? – [01/02/18]
“First envisioned in 1677, proposals for a Thai canal linking the Gulf of Thailand and Andaman Sea are back on the agenda.”

A man, a plan, a canal…Thailand? – [25/01/18]
“Ex-top brass appeal to new King Vajiralongkorn to bless building the long-envisioned Kra canal; China is keen to start digging.”

Conference urges feasibility study on Kra Canal – [25/09/17]
“Engineers, retired politicians and bureaucrats urged the Thai government to conduct a feasibility study on building the Kra Canal, a waterway to link the Indian and Pacific Oceans, at a conference in Bangkok last week, claiming it would help drive growth throughout the entire Southeast Asian region.”

Groundswell of support for ‘Thai Canal’ – [18/09/17]
“A long-forgotten canal project has moved one step closer to being resurrected after a group of influential figures and businessmen with Chinese ties backed an economic feasibility study for the scheme.”

Kra Canal project revisited as part of China’s Maritime Silk Road – [11/09/17]
“The Kra Canal project has swept back into vogue again after years of being dismissed as too difficult to build, and opposition from Singapore, who would lose huge amounts of shipping. A group of influential retired Thai generals, politicians, academics and businessmen with close links to China have revived plans to construct a US$28 billion and 135 kilometre canal across southern Thailand to link the Indian and Pacific oceans.”

The Kra Canal: Double bypass – [14/08/17]
“Reports that Thailand, with Chinese money, is planning to build a new canal between the Pacific and Indian Oceans have set off a new wave of alarm bells over China’s plans to dominate the region.”

Thailand’s Kra canal plan would link Indian, Pacific oceans, benefiting China – [08/08/17]
“A group of influential retired Thai generals, politicians, academics and businessmen with close links to China have revived plans to construct a US$28 billion ($35 billion) and 135 kilometre canal across southern Thailand to link the Indian and Pacific oceans.”

The real threat to Singapore – construction of Thai’s Kra Canal financed by China – [02/10/16]
“China is keen on the Kra Canal project partly for strategic reasons. Presently, 80% of China’s oil from the Middle East and Africa passes through the Straits of Malacca. China has long recognized that in a potential conflict with other rivals, particularly with the US, the Strait of Malacca could easily be blockaded, cutting-off its oil lifeline. Former Chinese President Hu Jintao even coined a term for this, calling it China’s “Malacca Dilemma”.”

The Thai Canal that may change Singapore forever – [30/04/16]
“If Thailand created it, the canal would shorten voyages from Europe to China by 1,200km and end Singapore’s status as a top sea hub.”

Thailand’s Kra Canal: Is Vietnam angling in? – Analysis – [04/09/15]
“Vietnam’s decision to build a deep-water seaport off its southern-most province of Ca Mau may signal the eventual building of Thailand’s Kra Canal as a new regional shipping lane.”

[12 routes of the Kra Isthmus Project.]

Kra Canal dream still far from reality – [07/06/20]
“Cutting across the southern isthmus would shake up global trade routes, but the long-debated project faces hurdles at home and abroad.”

No, China isn’t building a game-changing canal in Thailand (yet) – [21/05/15]
“Both Beijing and Bangkok have denied any government agreement on the Kra Canal.”

China not involved in Kra canal work – [20/05/15]
“China has denied it is involved in work on the Kra canal, defusing hype over a project that purportedly lets ships bypass the Strait of Malacca and Singapore’s port.”

Thailand, China teams up on Kra Canal – [19/05/15]
“Thailand and China have signed a memorandum of understanding (MOU) in Guangzhou to jointly cut a shipping passage across Kra Isthmus in southern Thailand, the narrowest part of the Malay Peninsula.”

Historic Thai canal plan resurfaces – [04/02/15]
“The idea of building a major shipping canal across the south of Thailand dates back to the 1600s. The most recent plan, discussed about a decade ago, involves financing from China, and it is this plan that has recently resurfaced in Thai local media.”

How a Thai Canal could transform Southeast Asia
“An idea to build a canal through southern Thailand could have broad geopolitical ramifications.”

The Kra Canal and Southeast Asian relations
“This paper is a conceptual study that attempts to analyse the possible effects of the development of the Kra Isthmus Canal on ASEAN relations.”

The Kra Canal : an analysis of a foreign policy alternative for the United States Navy in the Indian Ocean – [March 1975]