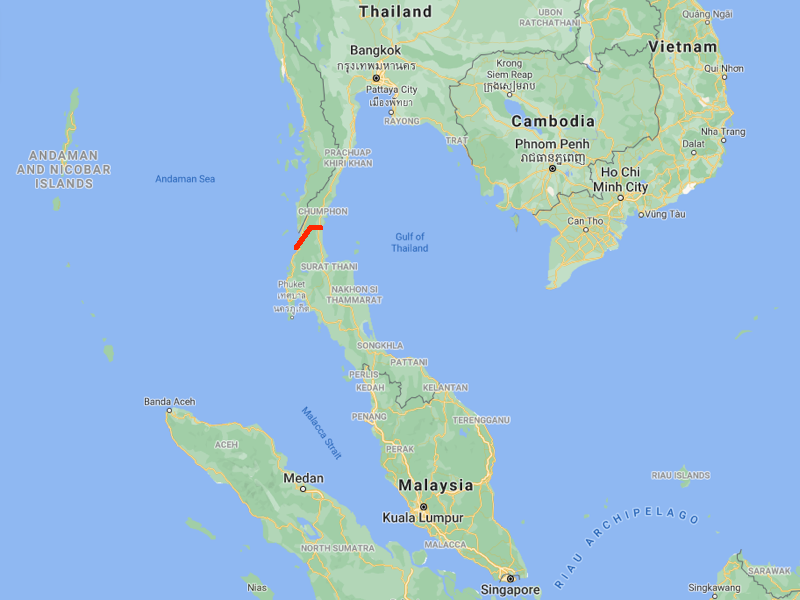 The Thai Land Bridge is a proposed rail and road transport corridor in Southern Thailand that would connect the Andaman Sea to the Gulf of Thailand. This has been touted as an alternative to the Thai Canal, which would cut a canal across Southern Thailand as a short cut to the Strait of Malacca.

Deep sea ports would be built at either end of the “bridge”, where containers would be unloaded, transported across the peninsula, and continue on another ship.

A land alternative to a canal was proposed in the 1990s. That route was from Pak Bara in Satun on the Andaman side, to Songkhla on the Gulf of Thailand side, via Hat Yai. The most recent route preference is from Ranong to Chumphon, and a decision on the route is expected to be made by June 2021.

High hopes for ‘land bridge’ project – [28/11/21]
“The Transport Ministry said the proposed land bridge megaproject, which will connect Chumphon on the eastern coast of the Gulf of Thailand to Ranong on the Andaman Sea, will become a major transit port, with a capacity rivalling Hong Kong.”

Saksayam pushes for megaproject – [06/05/21]
“Transport Minister Saksayam Chidchob has urged agencies to expedite the southern land bridge megaproject, which will connect the Gulf of Thailand with the Andaman Sea.”

Thailand pushes “land bridge” for trade to supplant Strait of Malacca – [21/03/21]
“The Thai government is pushing ahead with a plan to build a “land bridge” of highways and rail lines linking two new deep sea ports, one on the Andaman Sea and one on the Gulf of Thailand. The project aims to make southern Thailand the main route for cargo and oil traveling from the Indian Ocean and the Persian Gulf to the Pacific by offering a faster and cheaper alternative to shipping through the Strait of Malacca.”

Govt mulls southern bridge spots – [16/03/21]
“The government is surveying locations along the Gulf of Thailand and the Andaman Sea in Chumphon and Ranong for engineering, environmental and economic potential”.

Land Bridge in place of Kra Canal: Game changer for Thailand’s future engagement with region and China? – [01/02/21]
“A mega project proposal that envisions building a “Land Bridge” between Chumphon Province on the Gulf of Thailand and an enlarged deep-sea port in Ranong Province on the Andaman Sea has now been touted, supported by the Prayut administration.”

Thailand mulls path linking Indian and Pacific Oceans – [14/09/20]
“To avoid dredging a canal, the government proposes an alternative pathway through its southern isthmus. It plans to build two automated seaports — one on the Indian Ocean side and another on the Pacific side — and link the ports with a 100-kilometer expressway and rail network to transport goods between them.”

Thailand eyes ‘land bridge’ to link its coasts – [11/09/20]
“Thailand’s Prime Minister Prayuth Chan-o-cha this week publicly endorsed a proposed land bridge between the Gulf of Thailand and the Andaman Sea, apparently shelving a long-discussed project to build a canal across the Malay Peninsula.”

PM dusts off South Land Bridge plan – [09/09/20]
“Prime Minister Prayut Chan-o-cha on Tuesday ordered a new feasibility study into a proposal to build a land bridge between the Gulf of Thailand and the Andaman Sea, seen as a potential key part of a new major economic development plan in the South.”

Thailand looks to cut Malacca Strait shipping time by land link between Indian, Pacific Oceans – [31/08/20]
“Thailand is looking to construct a land passageway that would connect the Indian and Pacific Oceans, bypassing one of the world’s busiest shipping lanes.”

Thailand puts forward southern land bridge project to link two seas, promote rail transports – [27/01/20]
“The Rail Transport Department and the Marine Department have been assigned to jointly conduct a study and design on the southern land bridge project between Chumphorn province on the western coast of the Gulf of Thailand and Ranong province on the southeastern shores of the Andaman Sea, Saksayam said.”

Southern landbridge resuscitated – [06/11/12]
“The landbridge idea has been circulating for more than 20 years. Former prime minister Chatichai Choonhavan floated the idea in 1989. The National Economic and Social Development Board completed the project’s master plan in 1992.

The project was revived by the Thaksin Shinawatra government, but shelved after the devastating tsunami hit Thailand in 2004.”