On my most recent visit to Hanoi I started exploring some of the new urban areas. After putting it off for years, I’ve finally published a Future Hanoi page.

The “Future” pages I compile here are relatively straightforward. Most developments happen in the city centres, so I can knock out a list that covers the biggest projects.

The difficulty with Hanoi is that the major projects are outside the city centre. If you only stay in the ancient city you would be forgiven for thinking that nothing much is going on in Hanoi.

I had 10 days in Hanoi, which is the longest I’ve ever stayed in the 10+ times I’ve visited (I’ve lost count by now). On this trip I split my time between the old city and the Westlake expat area. An expat bubble isn’t exactly the best way to get to know a city, but in this case, it gave me the advantage of being closer to some of the new urban areas I wanted to see.

This is my 2022 Hanoi trip report for Hanoi construction projects.

There are big developments happening in the ward of Quang An, which is the peninsula area of West Lake. This is also the expat area where i was staying, and one of the biggest single-building developments in the city is Tay Ho View.

This is built in an area with small laneway access, so I don’t know how they think they will get buses into this area once the 1400-seat conference facility is operational.

At the little park near Tay Ho View, there is a sign showing how the land will be developed. The maps show that more land will be cleared to make roads and parks. This is in an area that is already built up, so houses will need to be acquired to make this plan happen.

One of the plans for this area is the floating opera house. It will be built on this pond within the peninsula. 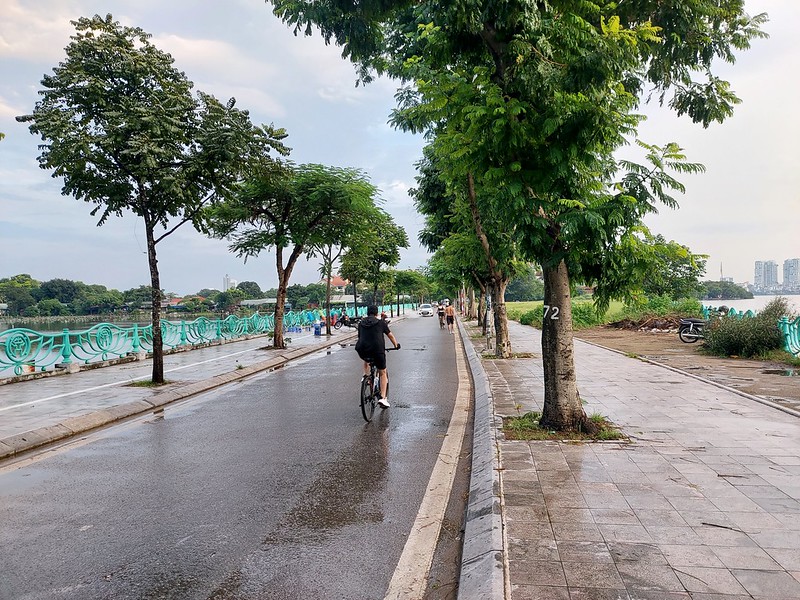 [Pond on the left, lake on the right.]

The crazy thing about developing this peninsula is that there is no metro line planned here in the grand metro plan.

One of the biggest development area closest to the city centre is Starlake City, also known as Tay Ho Tay (West Lake West), which is west of West Lake (of course).

This is one of the most high-profile developments in the city as it will contain the new National Administrative Center. At the moment this area is just empty space.

It was a shock to the system to walk around such wide and straight streets in Hanoi.

I saw a building that looked distinctly Korean, and it turned out to be the new South Korean embassy. Starlake City is being built by a South Korean developer, and the government has shown their support by moving the embassy here.

[Embassy of the Republic of Korea.]

I could see the skeleton of this unfinished tower from the other side of the lake. The VietinBank Business Center Tower is in a new urban area with a lot of other unfinished buildings.

Sunshine City is near the VietinBank tower and Ciputra new urban area. The main towers are finished, but the villas at the base of the tower are not occupied.

Ciptra is a new urban area to the north of Starlight City, and it includes Sunshine City and VietinBank. There is a large compound filled with villas in this area. It’s not technically a gated community, but there is a security entrance to enter, which I disapprove of having in city centres.

There are “eco paths” in this area, which in any functioning city is called a footpath/sidewalk. A footpath that is separated from traffic should be a standard feature, and not celebrated as being an eco feature. If anything, new cities should have special sections reserved for cars called roadways, and they should be told that they are privileged to have such space near pedestrian areas.

Even more annoying is that the path is painted green, as if to give it green credentials. Meanwhile most of the paint has washed off into the drains or entered the groundwater.

It took me 30 minutes to walk from one end of Ciputra to another, and I didn’t see a single motorbike on the footpath. It was tree-lined the entire way, so I didn’t need the green paint to tell me how green it was.

Ba Dinh District is the historic heart of the city, and not somewhere I would expect to see featured in this site. I was shocked to see this historic building partly demolished when I visited in June. This is the old post equipment factory, which has since be ordered to stop demolition until further notice.

Train Street was in the news while I was there because it had recently been closed for tourists. It has become such a circus there that authorities have a guard at the entrance to stop people entering. I went there in 2019 during the height of its Instafame. Eventually the railway will be moved when a metro line will be built in the same corridor.