Phan Rang–Thap Cham is the capital city of Ninh Thuan Province in the South Central Coast region of Vietnam. Ninh Thuan is bordered by Khanh Hoa to the north, Binh Thuan to the south, and Lam Dong in the Central Highlands to the west.

Ninh Thuan Province has the lowest GDP per capita in the South Central Coast region and the lowest alongside Kontum in southern Vietnam. So far Ninh Thuan hasn’t capitalised on coastal tourism like Nha Trang to its north and Mui Ne to its south.

Like every coastal province in Vietnam, there are changes afoot. New resorts are being built on the coast, with one developer in particular looking to turn the province into a tourism hub. Another developer in Phan Rang–Thap Cham is building modern apartments, a new urban area, and a mall.

Here is a look at some of the major projects happening in Phan Rang–Thap Cham and Ninh Thuan Province.

One of the most high profile developments in Phan Rang is the Sunbay Park Hotel & Resort by Crystal Bay. This is on Binh Son Beach, which is the municipal beach of Phan Rang-Thap Cham. 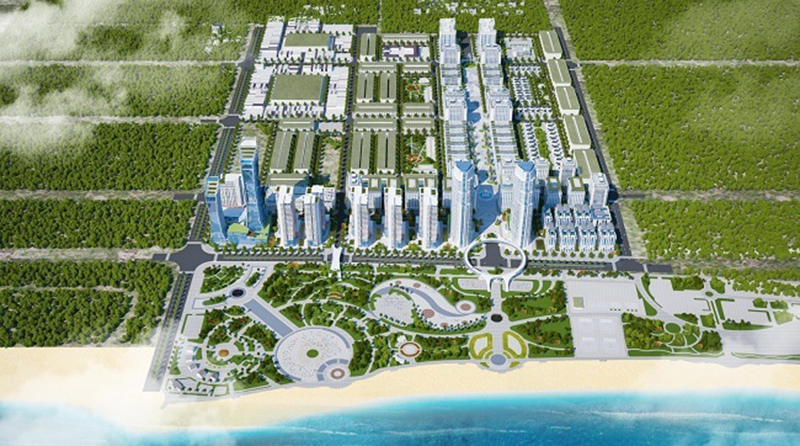 Binh Son Ocean Park is a new urban area at Binh Son Beach that will be developed by Hacom Holdings. 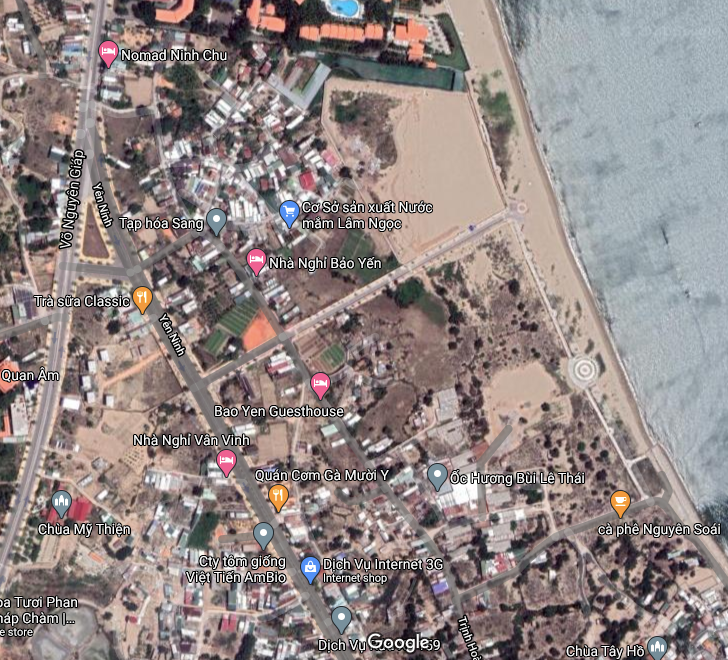 The image from Hacom Holdings is from their website, but there aren’t any other details. It looks like the same road layout and park at Phan Rang Beach so I’m placing it here. The image depicts a futuristic new city without relying on skyscrapers that the other beach cities of Vietnam are building. 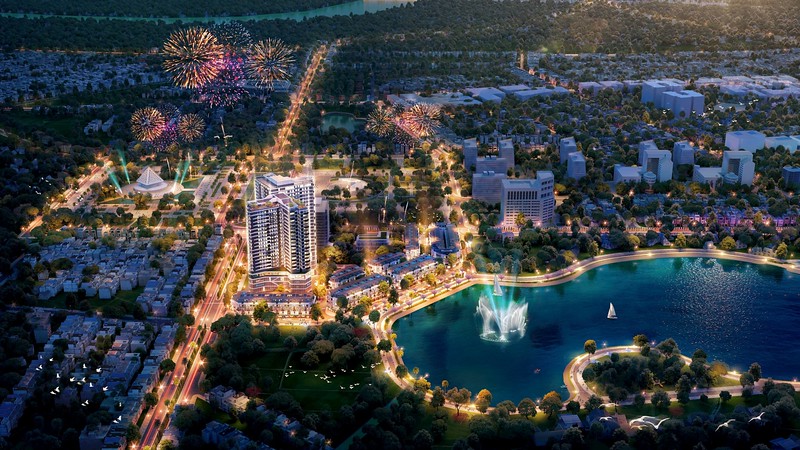 Hacom is a major developer that is looking to transform Ninh Thuan, and Phan Rang–Thap Cham in particular. The Hacom Mall is under construction and will feature apartments, a hotel, villas, shophouses, and retail.

Hacom GalaCity comprises four apartment towers being built in a new urban area in a central part of the city.

Ninh Hai is a district next to the city of Phan Rang-Thap Cham. It shares the same beachfront and feels like it’s a part of Phan Rang. 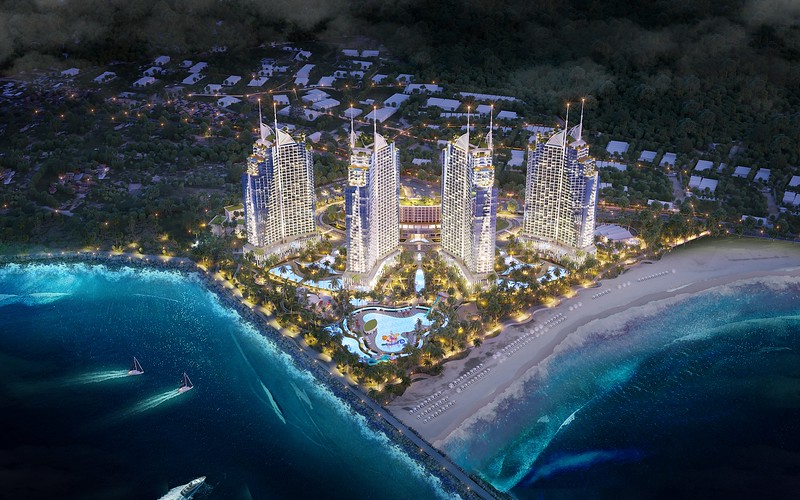 Sailing Bay Ninh Chu is another development by Crystal Bay, similar in scope and size to the Sunbay project. 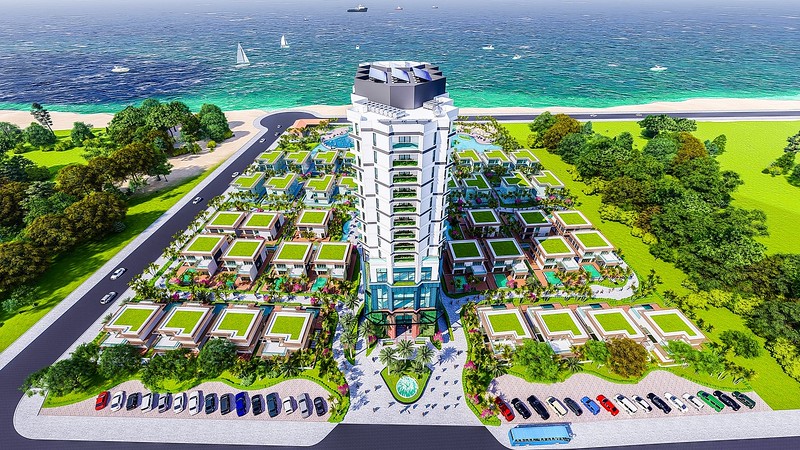 The Aminia Ninh Chu Hotel and Resort project is in the lively Ninh Chu Beach area.

Ninh Phuoc District covers the area to the south of Phan Rang-Thap Cham, down to the city of Ca Na at the border of Binh Thuan Province. The coastal drive from Phan Rang to Ca Na is a desolate yet scenic coastal road. 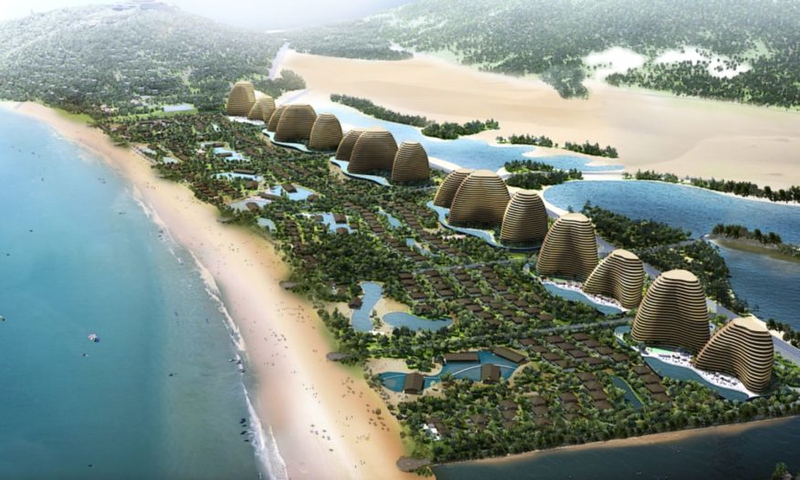 This 728-hectare site on the cape of the Mui Dinh Lighthouse, near Ca Na. According to the architect’s website, the project will consist of “six resort hotels, a boutique hotel, a casino, a theme park, 500 villas, a beach club, and a mountain clubhouse”.

Coastal projects in Vietnam depend on a nearby airport to drive development. Ninh Thuan has the Phan Rang Air Base, but unlike Cam Ranh, this former American airbase (originally built by the Imperial Japanese Army) remains exclusively used by the Vietnam People’s Air Force.

The nearest airport to Phan Rang is 63 km away, at Cam Ranh International Airport in Khanh Hoa Province. Another airport is planned at Phan Thiet in Binh Thuan Province, 130 km to the southwest of Phan Rang.

Ninh Thuan’s best hope for a transportation boost will be when/if the North-South Express Railway gets built. Currently, Thap Cham is on the main North-South line, and it takes 5 hours and 20 minutes to travel the 320 km from Saigon. An express railway would bring the trip down to about 2 hours, making it a feasible weekend getaway destination from Saigon.

Another project to watch is the proposed revival of the Thap Cham-Da Lat railway. This one is unlikely to happen, but it’s added here for the record.

Crystal Bay reveals large scale hospitality projects in Ninh Thuan – [23/09/18]
“Crystal Bay plans to set up a large-scale hotels and resorts project in Ninh Thuan province which has capacity of up to 10,000 rooms and can serve 1.5 million travelers each year.”

This report lists some other beaches that have been considered for development in the future.