The Central Highlands Region is comprised of five provinces in the mountainous area of south-central Vietnam.

There are no railways in this region (apart from a short tourist line in Da Lat), but there are plans for railways in the future.

The main railway proposal is a line that would connect four of the five provinces, and provide an alternative route from Ho Chi Minh City to Da Nang. There have been other lines proposed over the years with varying degrees of seriousness.

I have made this map to show what the Central Highlands would look like if all of the proposed railways were built.

This map is drawn in subway style, showing what a future travel map might look like to promote tourism in the Central Highlands. With very few details of what route each line would take, there is no point in trying to plot a map with geographically accurate routes.

Here are the details of each line that has been proposed.

A small section of the old railway runs as a tourist railway from Da Lat to Trai Mat. This is the only operating railway of any kind in the Central Highlands.

The Gia Nghia-Da Lat railway was proposed in 2011, but there hasn’t been any news of it since. This 105km railway would link Lam Dong province to Dak Nong Province. If this was built it would connect Da Lat to the other capitals of the Central Highlands region, and also offer a second railway alternative from Da Lat to Ho Chi Minh City.

The line would also go to Gia Nghia in Dak Nong Province, where the railway would then run to the Binh Phuoc Alumina Mill and the bauxite area in Cambodia.

Vietnam’s Central Highlands are believed to hold the world’s third-largest bauxite deposits, and the mines have been a controversial issue.

This report from 2012 by the Australian mining company Atlantic shows a railway map from the mines to the port. 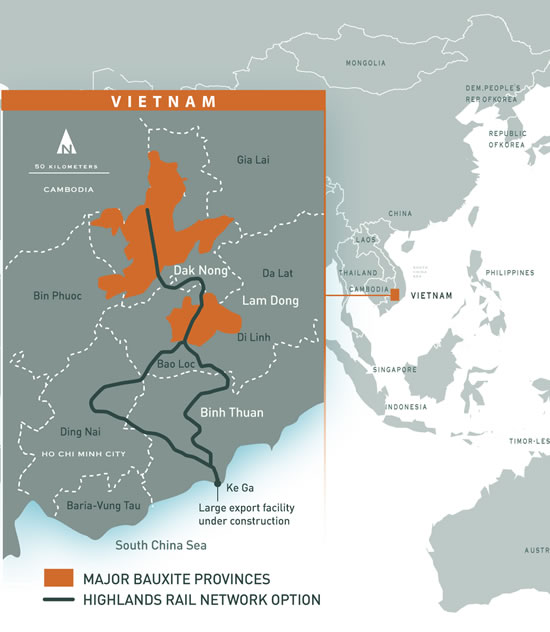 The map shows an alternative route via Dong Nai Province. This longer option hints at the challenge of building a railway suitable for freight from the coast to the Central Highlands.

Site clearance for a new deepwater port in Ke Ga was approved in 2011, but the project was cancelled in 2013.

A news report in 2018 mentions the bauxite railway going to Mui Ne in Binh Thuan province, though this is a tourist and fishing area with no seaport.

The railway would pass by Bao Loc, which is becoming a popular highlands destination alternative to Da Lat. There are lots of new homes planned for the future here.

If all of these railways were to be built, it would turn Gia Nghia into the major transport hub of the Central Highlands. Gia Nghia is the smallest capital city in the highlands, with a population of just over 60,000 people.

This railway is included in the 2015 Decision No. 1468/QD-TTg (Approving the adjusted master plan on development of Vietnam’s railway transport through 2020, with a vision toward 2030).

According to this report, Buon Ma Thuot Station would be located in the west of the city (Cu E Bua commune). There would be three bypass stations (Ea Lam, Ea Til, Hoa Dong) and an intermediate station at Ea Kar.

The Southern Economic Corridor is a proposed transport route to connect Myanmar, Thailand, Cambodia, and Vietnam. This is an alternative route of the East-West Economic Corridor that ends in Dong Ha on the North Central Coast Region. If this was built as a railway, it would connect Pleiku to Quy Nhon, and provide a new rail link from Vietnam to Cambodia.

The preferred route of the Southern Economic Corridor is from Dawei to Vung Tau port (near Ho Chi Minh City). An alternative route was added later to include Siem Reap and Quy Nhon, which goes via the Central Highlands. There is no likelihood of this route becoming a railway, but I’ve added it here to envisage what a railway network with multiple economic corridors would look like.

In 2011, Dalat proposed building six monorail lines covering 89 kilometres. This was announced at the same time as the Da Lat-Gia Nghia railway. This is the only urban rail transit system (and airport railway) that has been proposed in the Central Highlands.

+ To research and build railway routes: Di An – Loc Ninh connecting with railway of Cambodia.”

PM: railway system needs to be upgraded – [29/10/20]
“He suggested developing a railway system linking the Central Highlands and the central region and HCM City, and another between the southern metropolis and the southwestern region.”

Buon Ma Thuot city in Dak Lak to become central hub of Central Highlands – [25/12/19]
“The central government and Dak Lak province will prioritize investment in building a synchronous and modern infrastructure system for the city, connecting it with adjacent provinces, regions and other countries by road, railway and aviation. The pace of key projects will be accelerated, such as…the Buon Ma Thuot – Tuy Hoa railway.”

Vietnam to connect coffee belt with $5.1 billion infrastructure investment – [25/06/15]
“The ministry will work with local authorities to mobilize funds for the construction of railway routes to facilitate aluminum mining and production in the Central Highlands and help connect the region to seaports.”