Kuala Lumpur has slowly and steadily been building out an urban rail transit system that it hopes will reduce the city’s car addiction.

Mistakes were made early on with integrating the lines, but there have been some great improvements in recent years. In fact, KL has examples of the best and worst ways to make interchanges with rail transit lines, so I have picked out some examples.

Before we go any further, I titled this article as the KL metro, but it is officially the Klang Valley Integrated Transit System. That is a mouthful and it doesn’t make a nice acronym (KVITS), and readers from outside Malaysia probably don’t where Klang Valley is. The system is also referred to as Rapid KL (the railway operator of most of the lines), but they don’t operate the commuter lines. The stations I have used as examples are within the boundary of Kuala Lumpur, so they are technically KL metro stations.

Even though Rapid KL doesn’t operate the commuter railways, they have fortunately produced a beautiful map that shows all the lines integrated as if it is one system. This map is really filling out now compared to when I first used it in 2006.

You can view this official map at myrapid.com.my. Click out and zoom in so you can follow along with the article.

Interchanges and connections in Kuala Lumpur

This is not a review of every interchange in KL, but I have picked a variety of stations that show the extremes of best and worst design. 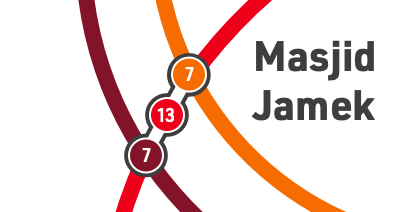 Masjid Jamek is a good example of how not to build an interchange station and a case study on how to go about fixing it.

Masjid Jamek has an interchange with Lines 3/4 and Line 5. Line 3 and Line 4 are two above-ground LRT lines that share the same line at Masjid Jamek, so it is one line with two platforms.

Line 5 is another LRT line that is underground.

The two railway operators were not required to provide a same-ticket interchange, so there were two separate stations at Masjid Jamek.

STAR and PUTRA Light Rapid Transit operators went bankrupt and the railways were transferred to Rapid KL in 2002. It was not until 2011 that Masjid Jamek was remodelled so that the two lines could interchange with the same ticket without leaving the paid ticket area.

This is a great improvement on the original interchange, which required crossing the road to get to the other station and using a different ticketing system.

The four platforms of Masjid Jamek weren’t designed to be an interchange though, so transferring from 3/4 to 5 feels like walking through an obstacle course.

Masjid Jamek is fixed, but the station is forever scarred by the design that wasn’t built to interchange.

[Stairs to Ampang and Sri Petaling lines at Masjid Jamek.]

Pasar Seni is the LRT station near Chinatown. The original Pasar Seni station is an above-ground platform for the Kelana Jaya Line (Line 5). Pasar Seni happens to be opposite the historic old Kuala Lumpur Station on the other side of the Klang River. They are too far apart to be an interchange, but they have since added an integrated pedestrian walk across the river that connects Pasar Seni to Kuala Lumpur Station.

This is outside the ticketed area, which is denoted by the grey line on the map.

Pasar Seni now has an underground MRT station (Kajang Line/Line 9), which opened in 2017. The original Pasar Seni station opened in 1998, and it was never designed to be an interchange. Fortunately, they have remodelled Pasar Seni to provide an integrated interchange with the LRT and MRT lines. There is a new walkway and lift that takes you downstairs and underground to the MRT.

If this was in Bangkok they would have made you leave the ticketed area and climb a bunch of stairs to get to the other station. I have an article coming soon about the Bangkok interchange mess, so let’s not get ahead of myself here.

[Pasar Seni MRT entrance and the above ground LRT station.]

Overall, Pasar Seni is a good example of how to integrate an old station with a new line. It would have been extra nice if they had made an interchange with the KL Station commuter rail, but what they have done is above what could be expected for two stations this far apart.

KL Sentral is where long-distance, commuter rail, and urban transit railways meet in Kuala Lumpur. The station is a cluttered mess that has long since outgrown its expected capacity, and the government is considering how to fix it.

The KL Sentral Monorail station is not in KL Sentral. Instead, it requires a walk through the Nu Sentral Mall. To get from the monorail to the station, you have to walk into the mall, go up a level and walk through the shopping area, and then down another level to the main station.

[Walking through Nu Sentral Mall to get to the monorail station.]

The monorail opened in 2003, while Nu Sentral Mall opened in 2014. I was a frequent visitor to KL while the mall was being built, and I thought (naively) that they would somehow improve the connection from KL Sentral to the monorail.

If they had the vision of Singapore with the money to pay for a starchitect, then they might have built the monorail through the mall to reach KL Sentral. This picture is of a people mover that goes between two termninals at Singapore Changi Airport via a mall/public shopping area/indoor park. 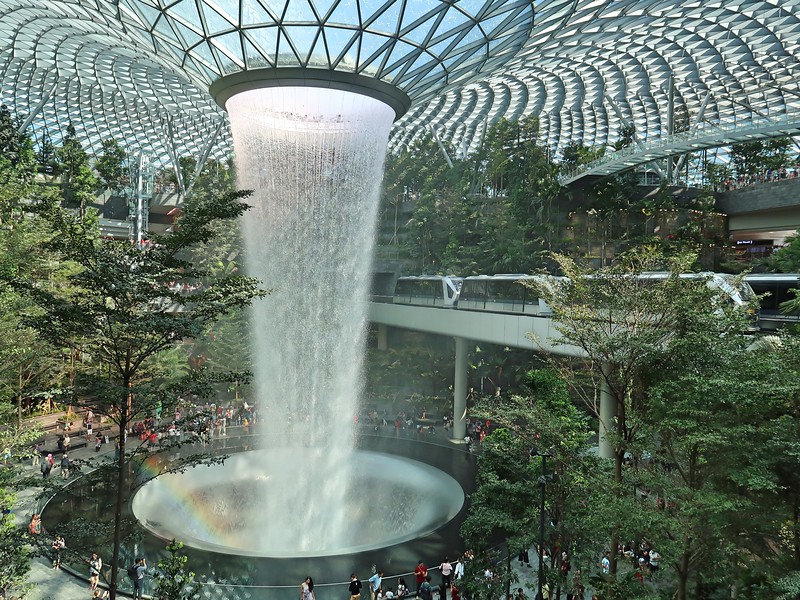 That would have been a big and expensive task, and I’m just dreaming like a man who found a spare billion in his bank account. The extension of the monorail would have been complicated because there is a road between the two stations (which is why you have to go upstairs through the mall).

A more sensible alternative would have been to build a dedicated passageway where passengers could interchange in a paid ticket area. That would have meant that the mall operator would have had less floor space, but this should be a public transit centre first, and a mall second.

The interchange between Sultan Ismail LRT Station and Medan Tuanku Monorail station is an elevated pedestrian walkway of about 650 metres. I discovered this walkway when I was exploring Chow Kit, and I am still amazed that this “interchange” exists. It is technically a connection because it is outside the ticketed area, and they are not trying to sell it as an interchange. 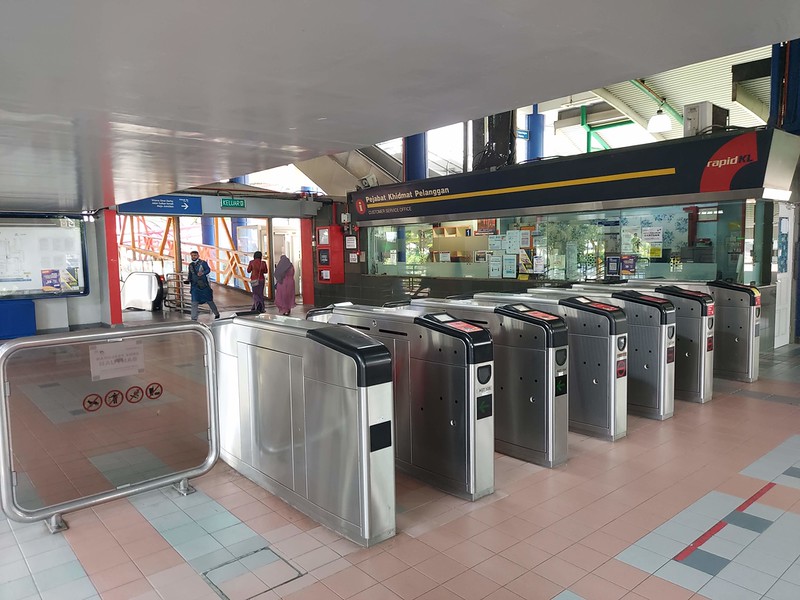 These two stations are too far apart to be considered an interchange, yet the decision makers have gone above and beyond the call of duty by providing a step-free covered walkway for the entire distance. 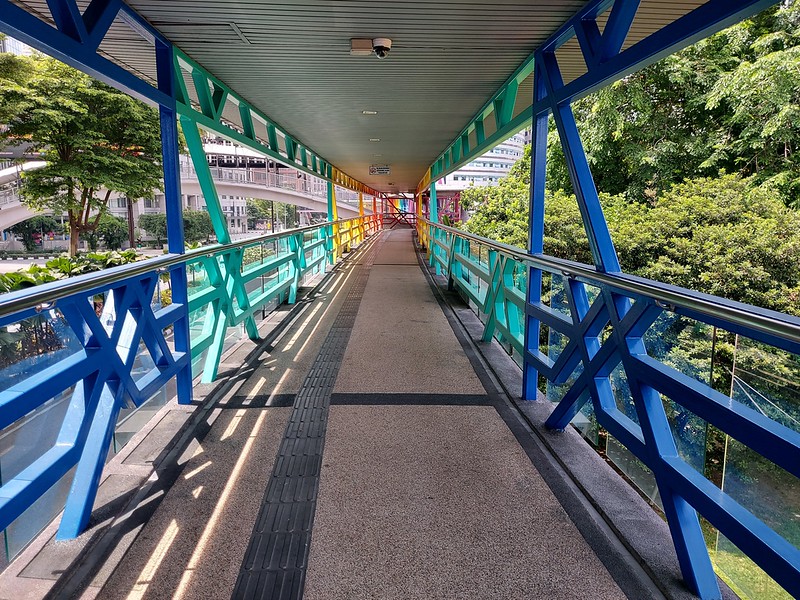 My dream would be to have KL covered in elevated walkways like this, to the point where eventually you could walk across the entire city.

I was curious to see what the other long walkways represented on the map looked like, so I did the walk from Putra to PWTC. I got the train to Putra, and upon exiting the station there are covered stairs to the main road. 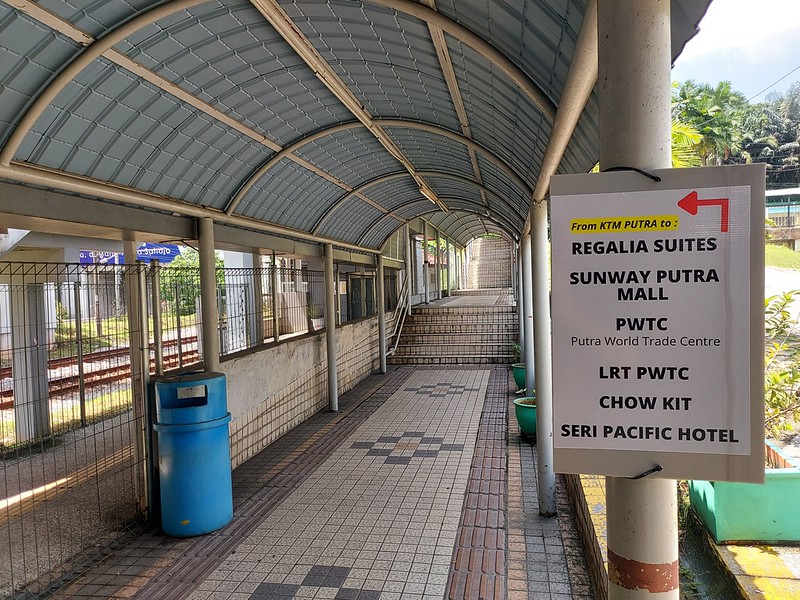 [Directions from Putra to PWTC.]

The start of this walk has stairs and is along the road, so it didn’t get off to a good start. The walkway was covered though, so I assumed it would improve. The walkway goes along a bridge and then a walkway in front of the Putra Mall.

After walking along the road, there are stairs and a lift to an elevated walkway.

Midway along the walkway is a junction where you can go to a hotel entrance or the mall.

[Junction to hotel, PWTC, and mall.]

The walkway delivers you to PWTC Station with step-free access.

The urban rail transit system of KL reached interchange nirvana with the opening of the TRX station at Tun Razak Exchange. TRX is a new urban area close to the city centre, and it is being positioned as a financial hub of the city. It is home to Exchange 106 tower, which is the third tallest building in KL.

[The best metro station in KL is somewhere under here.]

Two new lines will interchange here, with Line 9 already open, and Line 12 scheduled to open in 2023. With both lines being new and planned at the same time, this was a rare chance for KL to build a fully-integrated interchange.

I took Line 9 to TRX, and when I got off the train I was happy to see that they have built it as a cross-platform interchange with Line 12.

I actually did a little Lleyton Hewitt fist pump and a (quiet) “yes!” when I saw this. Kuala Lumpur has come a long way from the dreadful interchange mistake of Masjid Jamek.

[What I looked like when I saw that KL finally got its interchange act together.]

Here is the MRT page of this Side Stacked Platform (also known as a Split Platform).

If you have used the MRT in Singapore then you might be familiar with the North-South and East-West lines cross platform exchange at City Hall MRT station and Raffles Place MRT station. The best example though is Siam BTS Station in Bangkok, where the Silom and Sukhumvit lines converge. Even though the above-ground station is ugly, I like that you can see how the lines get positioned to make the interchange at the station.

The MRT at TRX is all underground, so passengers will just step out of one train and cross the platform to another, without thinking about how this interchange happened.

TRX Station is also a good lesson in metro map drawing. Lines on a metro map do not show actual alignments, so the cross lines on the map at TRX is not how it is aligned in reality. I need this reminder when making my own fantasy metro and railway maps.

There are more metro lines planned for KL, so there is further opportunity to make the new best station in Kuala Lumpur.