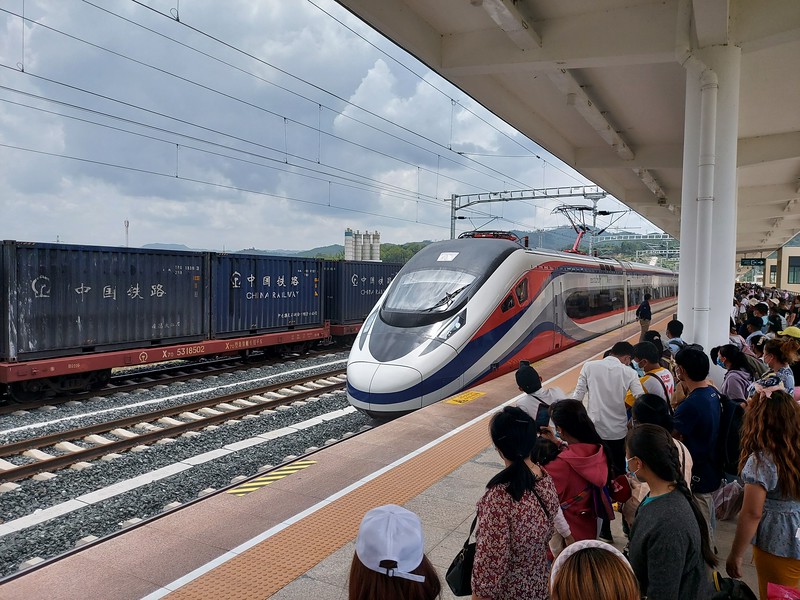 The Laos-China Railway opened in December 2021, and I would have tried to get a ticket on the inaugural trip had the borders been open. I was in Thailand when Laos reopened on the 9th of May, so I took the opportunity to visit shortly thereafter.

I have written a trip report from a traveller’s perspective on Nomadic Notes. This report at Future Southeast Asia covers infrastructure, ticketing, and future expansion plans. There are also observations I am thinking out aloud for discussion starters.

An ideal time to open

While the pandemic has been a devastating blow to economies in Southeast Asia, it has worked in favour of Laos to have closed borders when the railway opened. They have been able to run a soft opening by operating to a domestic audience. Thus they have been able to work out how to run a railway without news outlets and travel bloggers reporting on every issue.

The railway is run by a Chinese company with railway experience, but they still needed to train local staff. There have been operational and cultural issues to work through during this time. The train has been delayed a few times during heavy rain. It is not mentioned if this is a design flaw or just drivers being unfamiliar with heavy rain on this track.

There have also been issues of theft of cables and other metal parts that could be sold for scrap metal.

Domestic demand is there 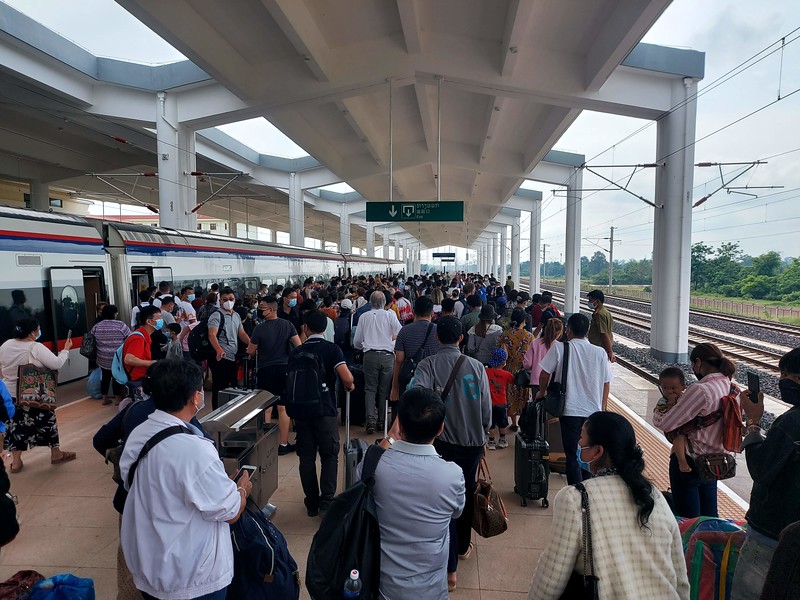 Another benefit of having only been operating for domestic passengers is to get a feel for what domestic demand is like. I was there five months after the railway began, and nine days after international borders opened. I hardly saw any foreigners using the railway, and the early novelty factor of the railway would have subsided by now.

At the time of my visit, they were running two express trains and one local train per day. There is also an extra return service in the evening from Vientiane to Luang Prabang. I hopped from station to station over the space of about 2 weeks, and every day I rode the train it was almost always full.

The only empty seats were on the last leg from Muang Xai to Boten. The Laos-China border is still closed, and Boten is still a big construction site, so I wouldn’t expect passengers there for now.

Riding from Boten to Muang Xai was the emptiest I saw the train, then it fills with passengers at Muang Xai.

I went from Vang Vieng to Vientiane on my last day, and this was the smallest group I saw waiting for a train (about 30 people at Vang Vieng). It turns out that there were not many seats left on the train to sell. I boarded and there was not a spare seat in the cabin.

At the train station ticket offices, they show all the trains for the next three days with the number of tickets available. When they show the trains operating for the same day there were many zeros on the board.

A few days after I finished my trip it was announced that prices were going up by 20%, so it appears that they are still working out what price the local population will tolerate. One of the casually-racist narratives has been that Laotians are too poor to afford to ride a train. This is a different statement from the government of Laos taking on more debt than they can handle to pay for the railway.

Will a single-track railway be enough?

It is reported by Chinese state media that the project cost $6 billion USD, which is a remarkable feat. The cost was kept down by the line being mostly a single track. Of the 414.332 km of track, 258.5 km consists of bridges and tunnels. Current and future stations act as passing loops for opposing trains.

Will building on the cheap with a single-track line cost more in the future with a congested railway?

At the moment there are only the 3-4 domestic passenger services per day, in addition to freight trains. If the 3-4 services per day fill the domestic demand, then how many extra trains will run when China has fully reopened and Thailand has a high-speed service from Bangkok? Possible extra daily services could include:

In addition to the extra passenger trains, there will be more freight services once the borders have reopened and the line has been unified between Laos and Thailand.

More services will require precision management of timetables as there will be more waiting times at passing loops. One delayed train will affect every other train for the rest of the day.

I would be interested to find out what is the mathematically most amount of trains that can use the track.

The first thing I thought when I saw the LCR logo was that it looks like the DB logo.

As a new railway, there was no way that the stations could be built in walkable downtown locations. I was most concerned about Vientiane and Luang Prabang, which are 17 km and 12 km from the city centre.

Vientiane was easy to get to by taxi in the early morning (about 20 minutes from the city), but coming back during peak hour took 55 minutes on the public bus. There are plans for a Bus Rapid Transit along the main road that leads to the station. The traffic in Vientiane is only going to get worse as it continues to sprawl in the direction of the station, so building the proposed BRT (or LRT) needs to be brought forward. After seeing the traffic I’m not sure a BRT would work, so it would have to be an elevated light rail/metro.

Luang Prabang doesn’t have the same traffic issues as Vientiane, so the trip from the station to the city centre was a pleasant ride through the countryside.

One of the factors that kept the construction costs down was by building the stations far outside the city centres. As a result, there is nothing to do near the stations. They are also far from established transit centres, making them inconvenient to transit from train to bus.

It would be a good idea to build some shops and restaurants around the stations. Non-passengers can’t enter the station, so there is nowhere else to go. 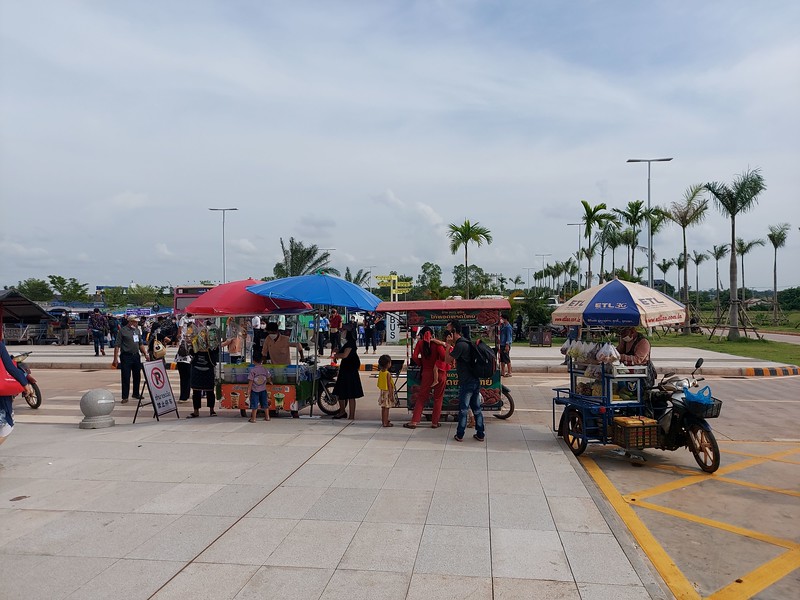 [Vendors at Vientiane Station – the only place to spend money at the station.]

The stations could also be turned into proper transit hubs. Vientiane Southern Bus Station is not far from Vientiane Station, so why not turn the station into a super transit zone by moving the bus station next to the train station.

Muang Xai Station would be another good candidate to turn into a transport hub. Muang Xai is on the route of a proposed new east-west economic corridor. Putting the bus station at the train station would make Muang Xai a proper transit hub of the north.

The Laos-China Railway is one of the construction marvels of Southeast Asia, yet in the five years it took to build the railway they couldn’t get a website ready in time for the opening.

Tickets are only sold at the stations or at an office in Vientiane and Luang Prabang. This needs to be sorted out before more international tourists return. 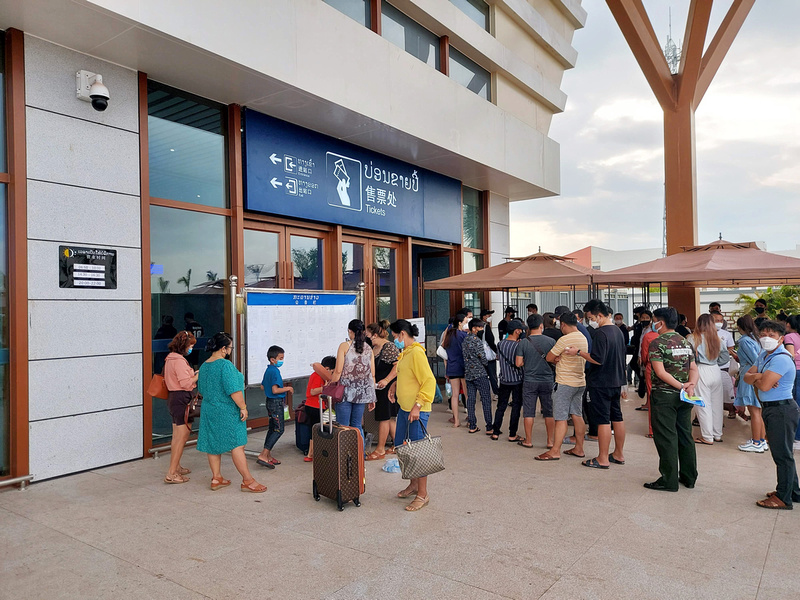 There are numerous proposed railways in Southeast Asia that are stuck in proposed status, which makes it all the more remarkable that the Laos-China Railway was built. One proposal is the railway from Vientiane to Vung Ang in Vietnam, giving landlocked Laos access to a seaport. It was announced that it would begin construction in November 2021. This would normally sound like one of those railways that will never get built, but now that the Laos-China Railway has been built, this now seems achievable. At the rate that Thailand is building their high-speed railway to Laos, they might even finish it before the Bangkok-Vientiane project.