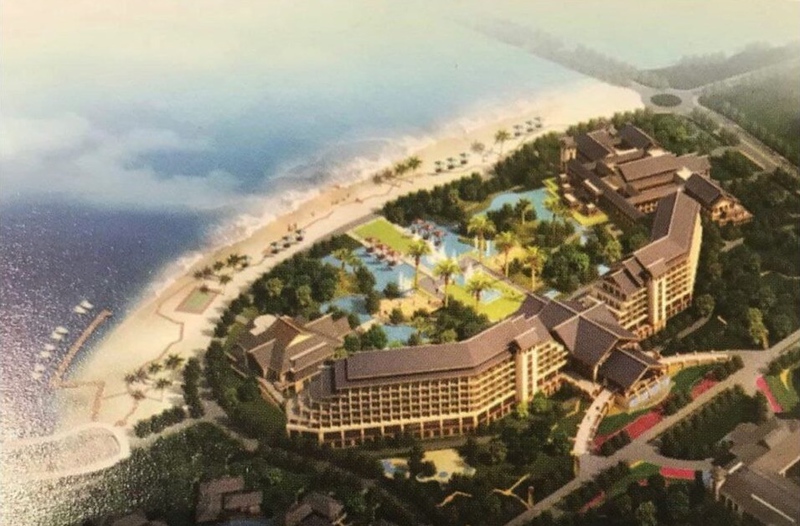 Kep Province is on the southeast coast of Cambodia, near the Vietnam border. Kep is surrounded by Kampot Province, and it was part of Kampot until it was made a province in 2008.

Kep was a seaside playground in French colonial times, and remains of old villas can be found along the coast and in the town. The government plan to turn Kep into a seaside destination again, with an artificial beach and the development of Rabbit Island.

Here is a list of projects that are planned or under construction in Kep Province.

The Kep Beach expansion is a land reclamation project that will create a 2.7 KM long beach and parkland area.

Gov’t approves proposed new public beach resort development in Kep – [14/08/21]
“The Cambodian government has officially approved a project to transform a 2.7-kilometre-long section of muddy beach from the Crab Market to a mangrove forest zone in Phum Thmey village in Kep province into a public beach resort.”

Kep-Koh Tonsay Tourism Port open – [19/01/22]
“With a surface area of nearly 5,000sqm, the pier is 68m wide and stretches out 306m into Chhak Kep bay towards the province’s most well-known island of Koh Tonsay. It is reportedly able to accommodate vessels of up to 300-passenger capacity.”

Another Cambodian island to be developed – [03/10/22]
“The Investment Committee of Cambodia of the Council for the Development of Cambodia (CDC) on September 30 decided to issue an investment project registration certificate to the Duke Try Pheap Company for the Koh Tbal Development Project to develop into a natural tourist area.”

Kampot, Kep Coasts Cluttered With Sandfilling Plans, Developments – [18/09/21]
“Between official documents, residents’ accounts and visible evidence of filling, reporters have found five seafilling projects on the Kampot coast — some of them spanning hundreds of hectares. Affected fishers have been told there could be twice as many in all.”

The purpose of the master plan is to transform Kep into a “high-end luxury tourism destination”, and also to help boost Kep’s tourism potential after the COVID-19 crisis.”

Cambodia’s Kep province set to become regional tourism hub – [06/05/20]
The Cambodian Ministry of Tourism is working to transform its southern province of Kep into a tourism hub that meets regional and international standards.

Kep in Cambodia: beach retreat favoured by country’s kings and French colonial elite is undergoing a revival – [29/05/18]
“In the first of three instalments looking at Cambodia’s rising destinations, we visit the coastal resort of Kep, which is looking to reclaim its rightful title as the St Tropez of Southeast Asia.”

Decree creates three new provinces – [31/12/08]
“King Norodom Sihamoni signed a royal decree on December 22 that would change the municipalities of Kep, Sihanoukville and Pailin into provinces and re-demarcate the boundaries between the provinces of Battambang and Pursat, and Sihanoukville and Koh Kong.”