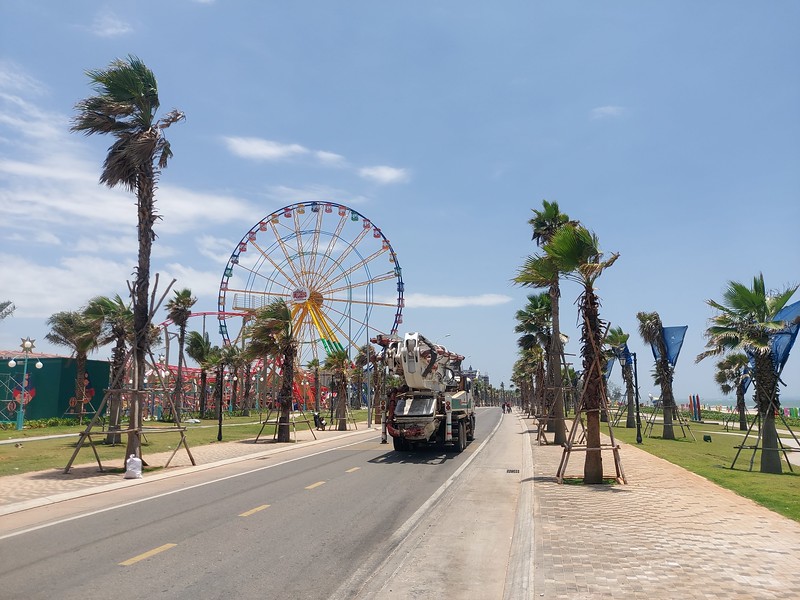 Bình Thuan Province in the South Central Coast region of Vietnam is best known for the beach resorts of Phan Thiet and Mui Ne. It doesn’t have the level of tourism of Nha Trang and Da Nang (not having an airport is a major factor), but it has its own niche of visitors.

In the before times, Phan Thiet was popular with Russian tourists and kite surfers. The pandemic and closing down of international borders for nearly two years dealt a devastating blow to the tourism industry of Phan Thiet.

While a trickle of domestic tourists has kept the lights on for some of the resorts, a drive down Nguyen Dinh Chieu (the main tourist road between Phan Thiet and Mui Ne) is a depressing sight of closed-down hotels and restaurants that catered for tourists.

Despite this gloom, Phan Thiet has a bright future ahead. It just remains to be seen if the good times take a year or a decade to come back. There might be a demographic change in visitors in the future as well. Maybe the Russians don’t come back en masse, and with so many other competing beach resorts in Vietnam, it might be hard to secure a meaningful amount of international tourists like before.

On the other hand, Phan Thiet may see a surge in domestic travellers with the new transport options that will soon be available. A new airport might see more Northern Vietnamese tourists, and the new motorway from Ho Chi Minh City will make it more appealing for Saigonese to make a quick visit. And if the high-speed railway ever gets built, then that will put Phan Thiet within commuting range of Ho Chi Minh City. It would be easier to come here than to Vung Tau (the closest beach to Saigon).

I visited Binh Thuan Province in April 2022. I stayed on the beach in Phan Thiet and used that as a base to visit some of the major projects on the coast. I was last here in September 2020, so I went back to some sites I knew were active to see how they were progressing. I also visited some districts that I haven’t visited before. A masterlist of all projects can be found at Future Binh Thuan.

All of the projects listed on this page are pinned on this map.

And for further reference, here is a map of Phan Thiet. Some places are referred to as Mui Ne, even though it is only one ward of Phan Thiet. 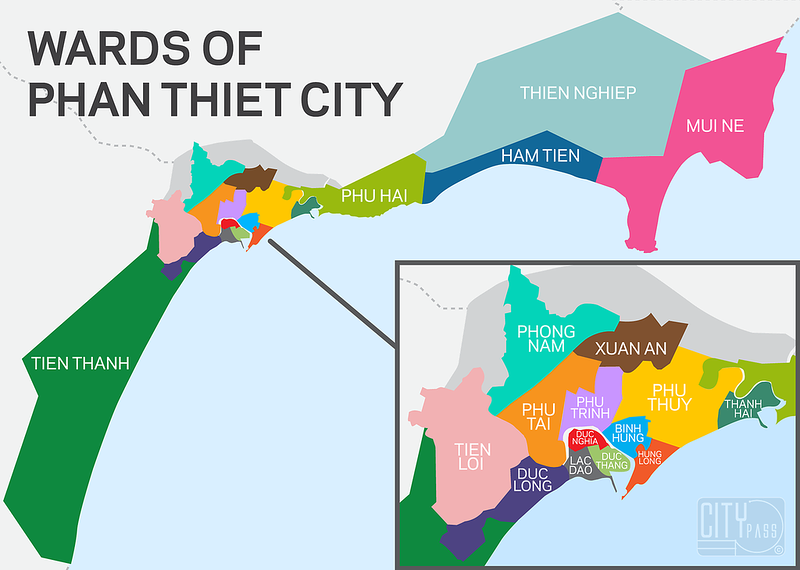 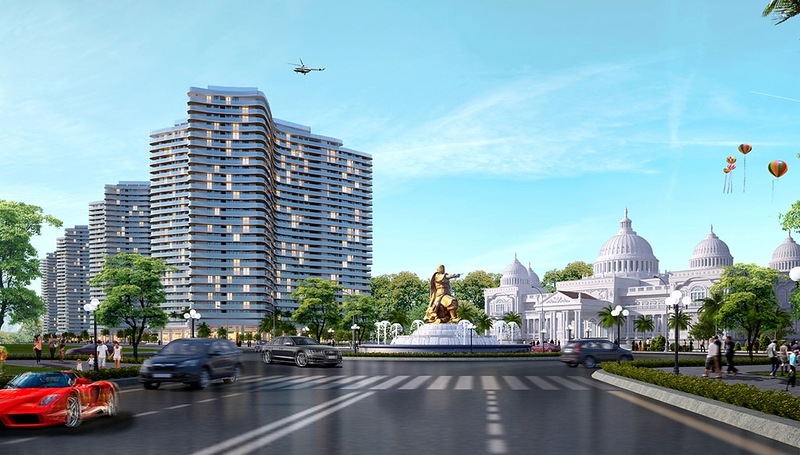 Ocean Dunes is a new urban area in the city of Phan Thiet. Not much progress has been made since my last visit, with only a few houses scattered around the new streets. 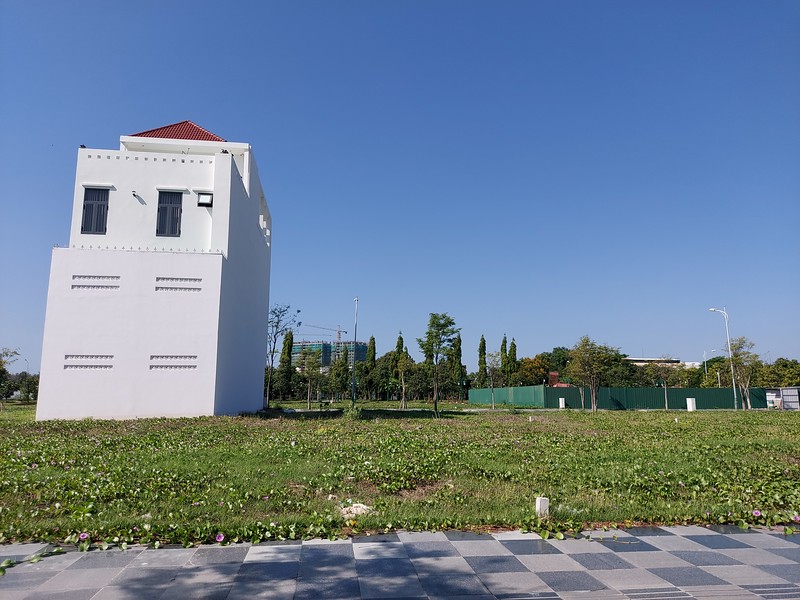 Progress has been made on the Rang Dong Headquarters building (Rang Dong are the developers of this project).

The building is a pastiche of several centuries of European architectural styles, and it now sticks out for miles in this otherwise lowrise city.

Phu Hai and Ham Tien are two wards to the east of Phan Thiet city that are often called Mui Ne. 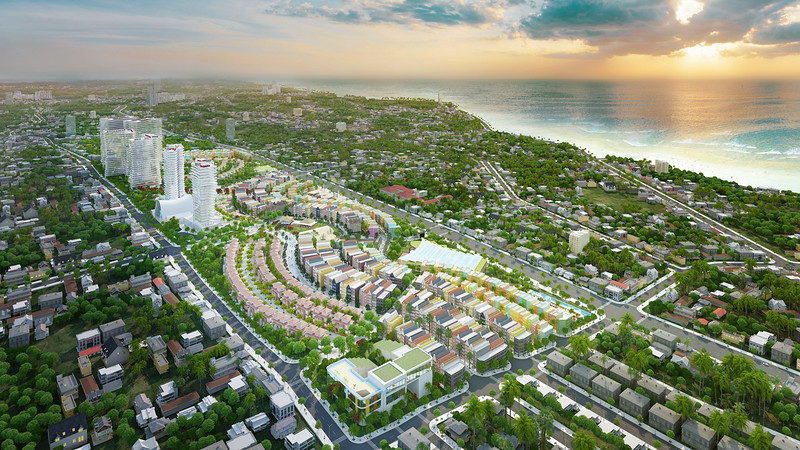 Vo Nguyen Giap is the upper road that connects Phan Thiet City to Mui Ne, and it will be the road to use to get to the future airport. I would expect more development along this road, and Mui Ne Summerland is leading the way here.

Some of the shophouses that face Vo Nguyen Giap have been completed, though they are still not opened. 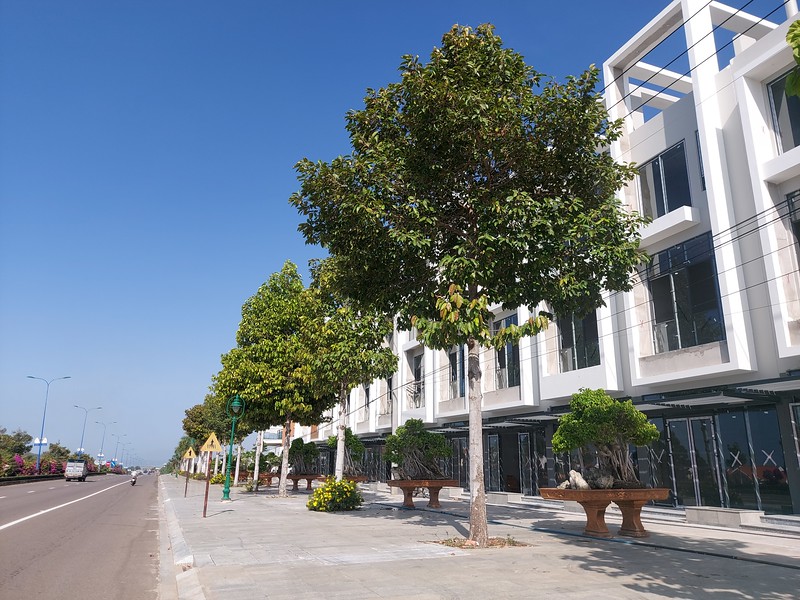 Work was still underway at the rest of the site.

On the other side of the road of Mui Ne Summerland is Seahara Hotel & Resort Phan Thiet project. This is also referred to on Google Maps as The Seahara Mui Ne Hotel & Villa. Neither of these projects are in Mui Ne, but such is the brand power of the name Mui Ne that many resorts use the name Mui Ne instead of Phan Thiet.

The two main towers will be 25 floors high. The height isn’t mentioned, so it’s hard to tell if it will be the future tallest building in Phan Thiet. Even if it’s not the tallest, it will look like the tallest because it sits on top of a hill.

Tien Thanh encompasses the southern coastline of the city area. 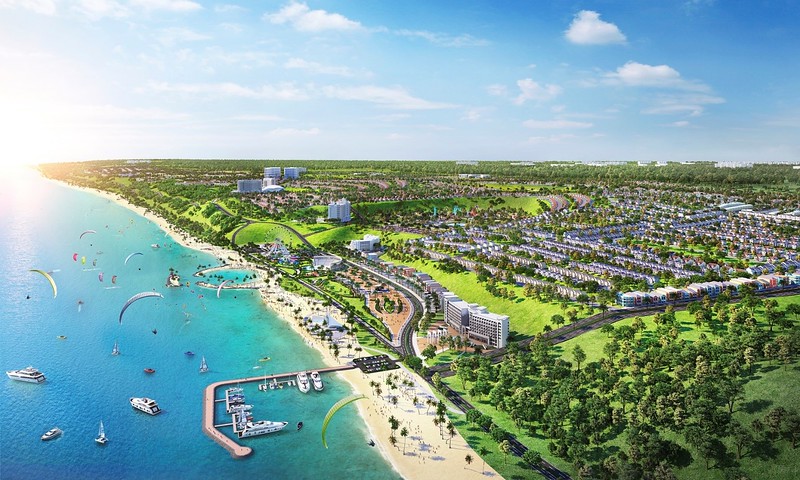 At the entrance to the NovaWorld area is the Movenpick Hotel. According to the designer of the hotel, the “architectural design is inspired from Port Royal castle, where was once a Caribbean pirates “capital” in the past, with Dutch colonial architecture taste.” 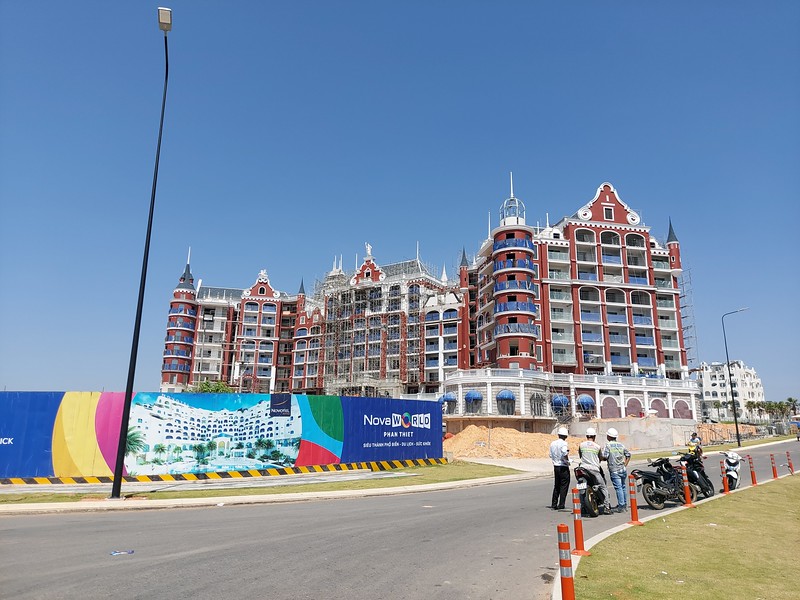 NovaWorld was still a work in progress when I was there, but some of the shophouses were open for business.

Another section under development in NovaWorld is called Santa Monica. 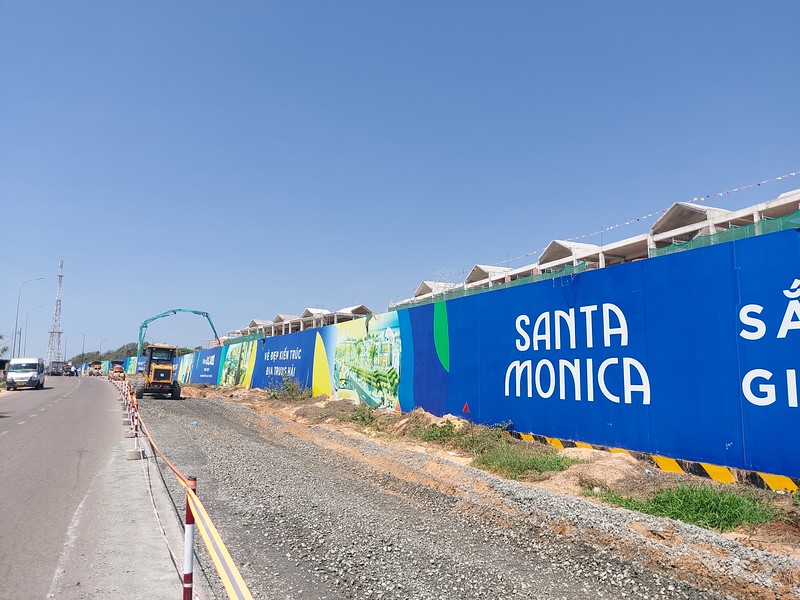 Most vehicles here were construction-related.

And a sign on the beach, in case you forgot where you were. 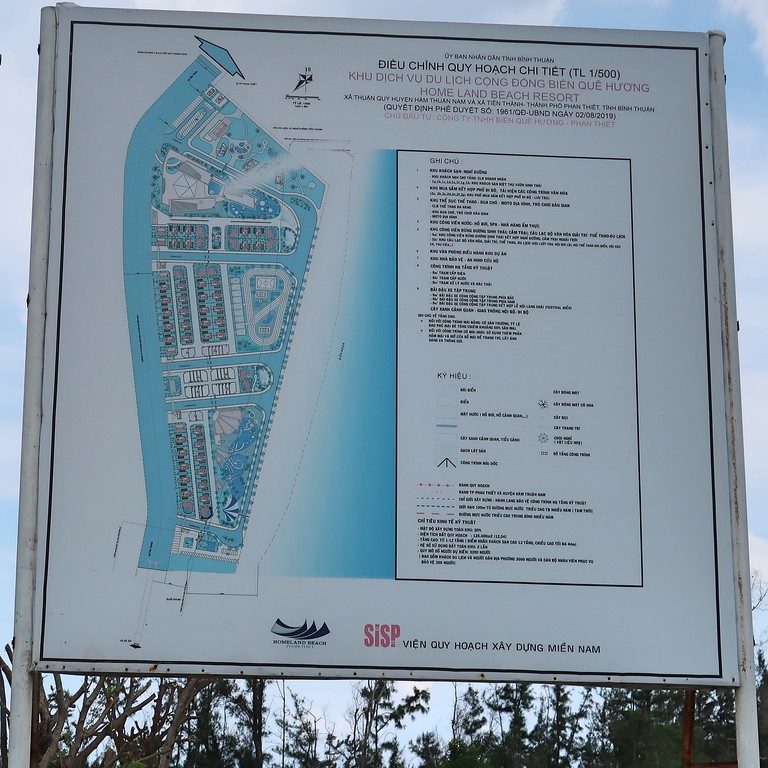 Progress appears to be made at the Home Land Beach Resort with a new sign erected at the site. 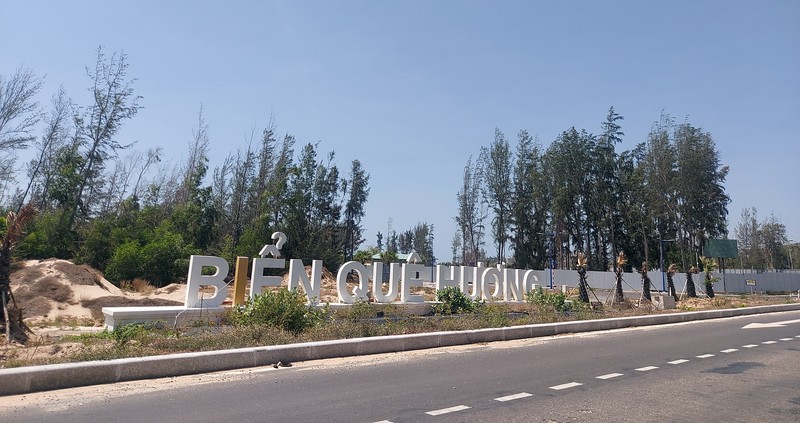 Streets have also been built, though so far there are no other details about it.

This is the real Mui Ne, which includes the fishing port town and the beaches on either side of Mui Ne town. 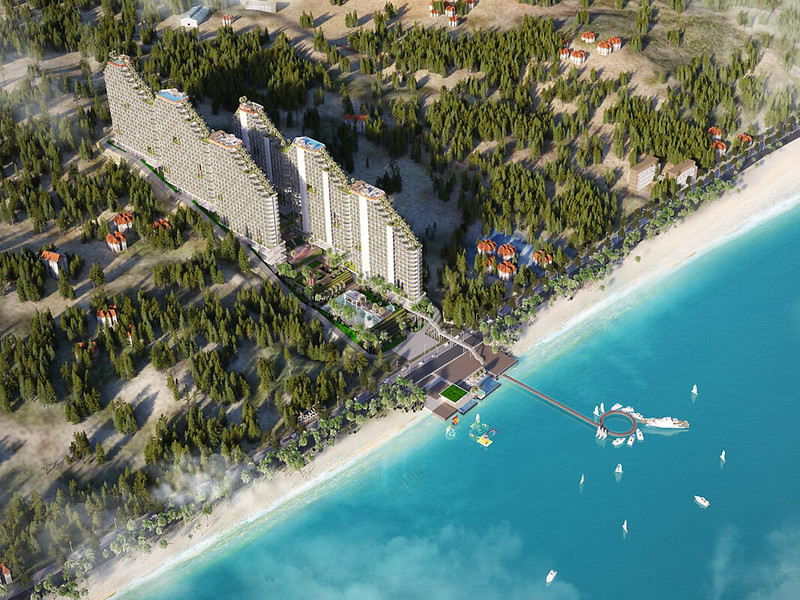 Apec Mandala Wyndham Mui Ne is to the north of Mui Ne town. This is the first big development on this stretch of beach, and the combination of four large towers sitting on top of a hill with nothing else around it really makes it stand out.

It is a long and steep way from the hotel to the beach, so I am curious to see how the path to the beach will eventually look compared to the promotional image. 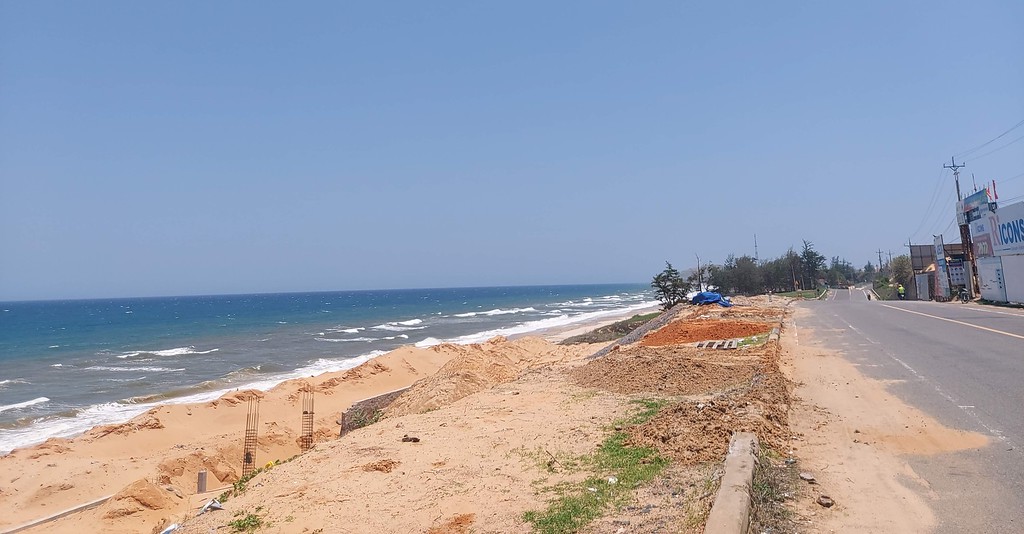 Ham Thuan Nam is a rural district south of Phan Thiet, and it is famous for the Ke Ga Lighthouse.

One of the projects I was most curious to see the progress of was Thanh Long Bay. This resort city is so big that it could also be classified as a new urban area. The project features a row of apartment blocks that remind me of The Interlace in Singapore. 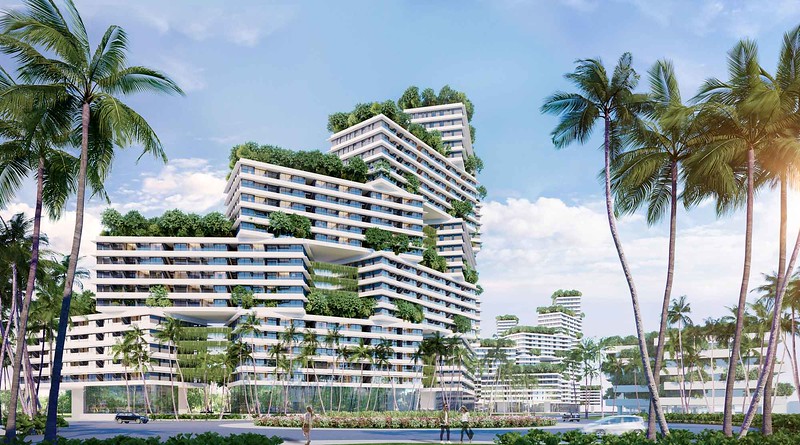 I was here in September 2020, and in the time since I was last here the project has been scaled down somewhat. There is now only a small section that will feature the stacked blocks of apartments. Perhaps they were overwhelmed by the cost of building such technically challenging structures. 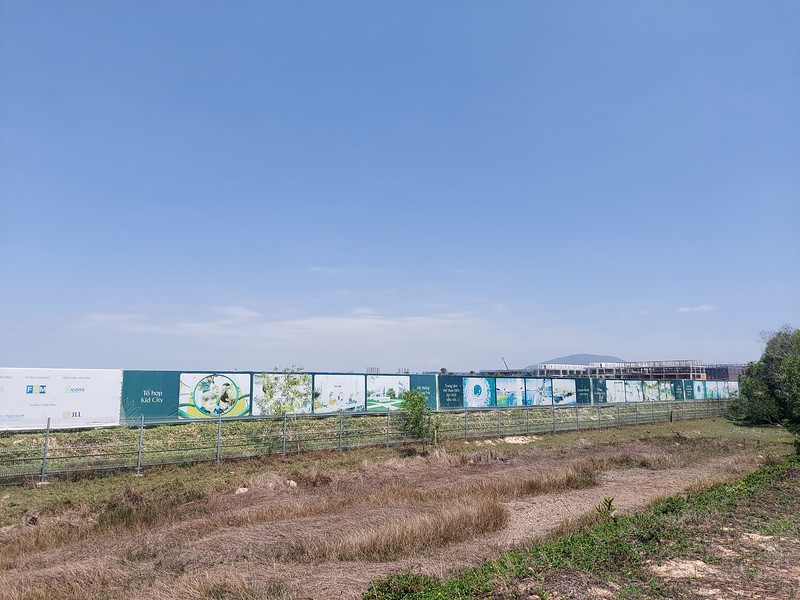 La Gi is a fishing port city that doesn’t see much in the way of tourism. There is a big seafront redevelopment happening in the city centre called Lagi New City.

After years of delays, the Phan Thiet Airport project commenced construction in April 2021. The airport was initially estimated to be completed by the end of 2022, though there haven’t been any updates on the project since then.

The Phan Thiet-Dau Giay Expressway is a 99km section of the North-South Expressway. This highway improvement will shorten travel times to Ho Chi Minh City, making Phan Thiet a more appealing destination for HCMC residents. The project was meant to be finished in 2022, but it was reported to be further delayed at the start of 2022.

There have been no meaningful updates on the status of the North–South Express Railway. Despite that, I went for a road trip to Tuy Phong District to have a look at an area that has been selected for an express station. Here is my report on the proposed Tuy Phong Station.