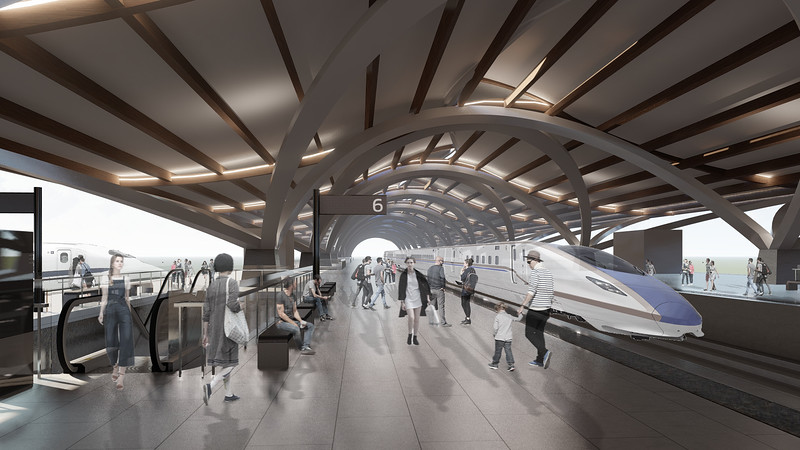 The Bangkok – Chiang Mai High-Speed Railway (also known as the Northern High-speed Railway) is a proposed high-speed railway that would be built alongside the current Northern Line in Thailand.

Japan has proposed building the railway in partnership with Thailand, and the line would be a Shinkansen-like bullet train similar to that used in Japan.

The project was first proposed in 2011, and a memorandum of cooperation (MOC) was reached in 2015. Japan released its study of the project in 2017, estimating that it would cost up to 420 billion baht to build (approximately $12.9 billion USD). Thailand wanted Japan to be an invester in the railway, while Japan was only interested in providing loans for the project. At that impasse the project has not progressed since 2018, though it still remains on the table as of 2021.

The length of the railway would be 670 km with 12 stations. The top speed would be 300kph, and the trip would take about three and a half hours. For comparison, the current line is 755 km and the journey takes from 11 hours to 14 hours and 20 minutes. The new line shortens the length because it uses tunnels and viaducts, while the old line meanders along the flattest path. The new line also shortens the trip by 8 km by starting at the new Bang Sue Grand Station in Bangkok.

To reduce the cost of the project, Thailand has also suggested reducing the top speed to 180kph and 200kph (which is technically not a high-speed railway). Such a railway would be comparable to the China-Laos railway and InterCity railways in Europe, and it would still be an improvement on the current railway. A trip of four and half hours would be a competitive alternative to flying.

Another consideration is that the railway would be shared with the planned Chiang Rai Railway, branching off at Den Chai. 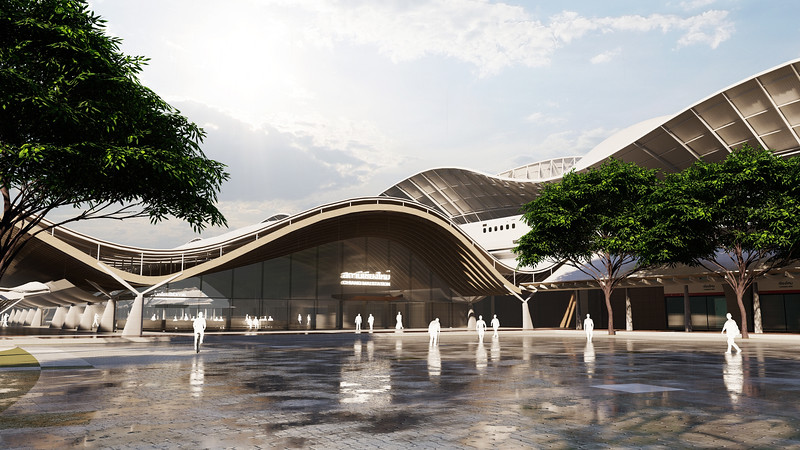 Joint Press Statement The Fifth Meeting of the Japan – Thailand High Level Joint Commission (HLJC) – [11/08/21]
“Both sides reaffirmed the determination to continue collaboration in the development of the quality infrastructure, including transport system in Thailand through key railways development projects, such as the Red Line Mass Transit System and the Bangkok-Chiang Mai High Speed Rail as well as the Second Mass Rapid Transit Master Plan in Bangkok Metropolitan Region (M-MAP2), the Bang Sue Smart City and the road traffic cooperation.”

Thailand hopes to have bullet trains running by 2023 – [17/11/19]
“…the government is considering additional HSR lines running north from Bangkok to Nakhon Sawan, Phitsanulok and Chiang Mai…”

Govt mulls end of fast train plan – [27/09/19]
“The government may scrap three high-speed rail projects after being spurned by private investors, a source at the Transport Ministry said. They are the Bangkok-Chiang Mai, Bangkok-Surat Thani and Rayong-Trat projects.”

Bangkok-Chiang Mai high speed train plans still moving forward – [30/10/18]
“Ministry of Transport, Thailand and Ministry of Land, Infrastructure, Transport and Tourism (MLIT), Japan, had signed a memorandum of cooperation to construct the high-speed line but the project stalled pending the resolution of financial and other constraints. However, Sarawut Songsivilai, the director of The Office of Transport and Traffic Policy will continue the effort.”

Japan reaffirms rejection of rail investment proposal – [24/10/18]
“Japan has reiterated its lack of interest in co-investing in a high-speed rail project linking Bangkok with the northern province of Chiang Mai, and suggests Thailand should solely invest in the scheme, a source at the Transport Ministry says.”

Losses predicted for high-speed railway – [25/07/18]
“The State Railway of Thailand (SRT) is worried that the planned Shinkansen-like Thai-Japanese high-speed railway from Bangkok to Chiang Mai will run at a loss when it opens, citing a 66% drop in predicted daily passenger numbers.”

Construction of Bangkok-Chiang Mai high speed rail project to start in 2020 – [24/03/18]
“The Thai government is working with their Japanese counterparts on the northern high speed rail route between Bangkok and Pitsanulok in the first phase, and between Pitsanulok and Chiang Mai in the second phase.”

Why the derailing of the Japan-Thailand train deal makes sense – [28/02/18]
“The recent failure of both sides to reach agreement is not all that surprising upon careful examination.”

Japan rejects calls to invest in Thailand’s bullet train – [08/02/18]
“Thailand wants Japan to invest in the Shinkansen-like high-speed railway from Bangkok to Chiang Mai but Japan insists only on offering loans for the project”.

“Prime Minister Prayuth Chan-ocha, who leads the country’s junta, instructed transport officials to consider reducing the top speed from 300kph to between 180kph and 200kph.”

Bullet train project set to cost B420bn – [16/12/17]
“Japan has concluded its study on the Bangkok-Chiang Mai Shinkansen-like bullet train construction, estimating investment costs to be as high as 420 billion baht and fares of just over 1,000 baht a trip.”

“The plan calls for 12 stations with the whole trip taking about three and a half hours with top speeds reaching 300kph.”

Japan rail projects: Somkid off to Japan to speed up work – [3/11/15]
“Deputy Prime Minister Somkid Jatusripitak, who is overseeing economic affairs, will lead a delegation to Japan later this month to negotiate three ambitious railway development projects for Thailand.

Japan will invest in railway development projects, consisting of two east-west corridor routes — from Kanchanaburi to Sa Kaeo, and Tak to Mukdahan. Another high-speed train will link Bangkok to Chiang Mai.”

“The second project — the 715km Bangkok-Chiang Mai high-speed train — will undergo a feasibility study by the Japanese government until June next year, with construction starting in 2019.

Japan intends to build railways similar to the Shinkansen in Japan, so it needs a thorough study.”

Japan to develop Thai high-speed rail links – [13/05/15]
“Both sides will sign a memorandum of cooperation (MOC) this month on joint development of the Bangkok-to-Chiang Mai, Kanchanaburi-Bangkok-Laem Chabang and Bangkok-to-Sa Kaew rail lines.”

High Speed Rail Project: Bangkok-Chiang Mai Route, Phase 2 (Phitsanulok-Chiang Mai) – [07/04/14]
“The high speed rail system (Phitsanulok-Chiang Mai) runs 280 km from Phitsanulok passing Sukhothai, Phrae, Lamphun, Lampang and ending up at Chiang Mai. It is Phase 2 of the High Speed Rail Project (Bangkok-Chiang Mai), which will encourage rapid yet safe transportation of passengers to and from the northern region and so consolidate national economy in the context of the AEC. Having conducted a feasibility study for Phase 1 (Bangkok-Phitsanulok), TEAM GROUP was entrusted with the feasibility study of Phase 2 in 2013.”

Thailand plans massive $76bn investment in infrastructure – [12/02/13]
“Foreign investors are expected to play a leading role, and Japanese Prime Minister Shinzō Abe has reportedly already expressed interest in Japanese firms’ participating in tenders, particularly for the upcoming high-speed rail projects. Chinese officials have shown strong interest in the rail links to Chiang Mai and Nong Khai, as they will eventually connect to the Chinese network.”

“Passengers will travel 3.44 hours on the 745-km of Bangkok-Chiang Mai route.”

Bangkok-Chiang Mai high speed rail ready by 2018 – [22/05/12]
“The Transport Minister has expressed confidence that the first high speed railway connecting Bangkok and Chiang Mai will be ready for service by 2018.”

Japan plans rail link study – [25/10/11]
“Japan is looking for a consultant to work on a joint feasibility study for a proposed 230 billion baht high-speed train service from Bangkok to Chiang Mai, the deputy director-general of the Office of Transport and Traffic Policy and Planning says.”

“State Enterprise Policy and Planning Bureau 1 chief Poomsak Aranyakasemsuk said the 745km route would have 13 stations in 11 provinces. The ticket price would be Bt1,200-Bt1,500 with around 29,000 passengers expected per day initially, rising to 40,000 passengers later.”