The Den Chai – Chiang Rai – Chiang Khong Railway is a proposed new railway in Northern Thailand. The railway would branch off from the current Bangkok-Chiang Mai Railway at Den Chai, towards Chiang Rai, and then Chiang Khong on the Thailand-Laos border.

This rail was originally proposed in 1960 but nothing came of it. The proposal was revived again in 2010, with numerous reports and announcements of impending construction dates made throughout the 2010s. The latest report says that the government will award construction contracts in 2021.

The line will be double-tracked, though it isn’t specified if it’s metre-gauge (like the current (Bangkok-Chiang Mai line) or standard-gauge (like railways in Laos and China, and possibly future Chiang Mai HSR).

There are published reports that show the line connecting with a new line in Laos that would travel to the Laos-China border in Boten. There is no plan for this at the moment, but if the railway starts construction I would expect an announcement of such a railway.

Other reports show a branch line to Wiang and the Golden Triangle area. 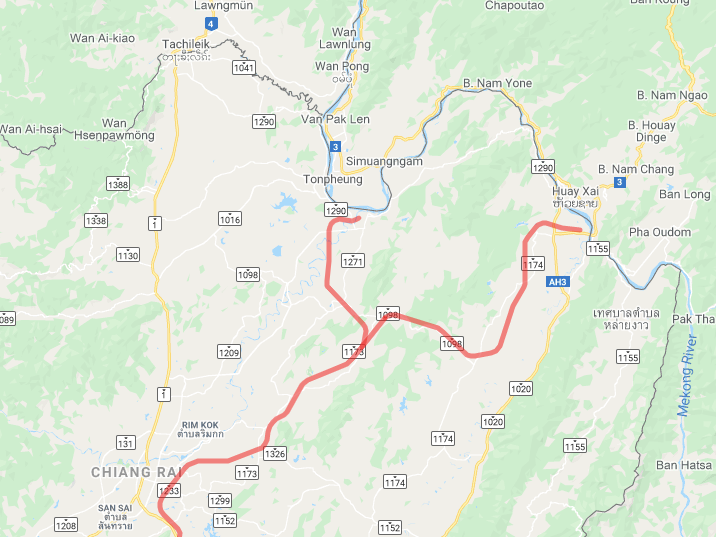 I would usually make a map, but this one has already been made in Google Maps. This map shows the spur line to Wiang.

Another map showing an alternative branch line going to Mae Sai, which would provide a connection through Myanmar. 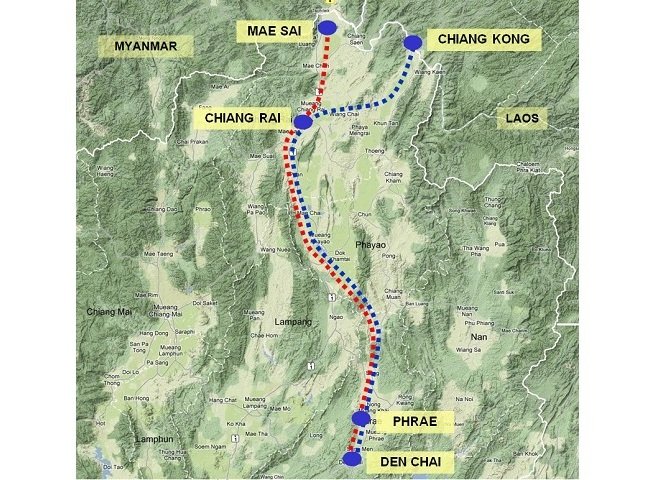 State Railway of Thailand backs bids for rail projects – [18/12/21]
“According to SRT Governor NirutManeephan, the approved bids include a 26.5 billion baht contract awarded to the ITD-NWR Consortium to build the 104km Den Chai-Ngao section, a 26.9-billion-baht contract to CKST-DC Consortium to build the 135km Ngao-Chiang Rai section, and a 19.3-billion-baht contract, also awarded to CKST-DC, for the 84km Chiang Rai-Chiang Khong section.”

Complaints hit northern rail projects – [10/07/21]
“Bidding for the two double-track railway projects worth 128 billion baht in the North and Northeast could be marred by alleged irregularities, a seminar was told.”

Rail chief defends bidding process – [15/06/21]
“At the centre of the controversy are the 323-kilometre northern section from Den Chai to Chiang Rai-Chiang Kong and the 355-km northeastern section between Mukdahan and Nakhon Phanom.”

The project will start from Den Chai station in Phrae province and run to Chiang Khong station in Chiang Rai province.”

SRT unveils ambitious plans for expansion and boosting revenue – [03/07/20]
“The Den Chai-Chiang Rai-Chiang Khong route is in the process of being proposed to the Cabinet before inviting bids, which will be divided into three contracts. After a review, SRT has found that three contracts are appropriate.”

2 SRT routes up for bids this year – [03/07/20]
“The Den Chai-Chiang Rai-Chiang Khong route project will be resubmitted to the cabinet for confirmation on whether construction and service operations will still be broken into three contracts”.

Northern rail link set for 2023 – [10/08/18]
“An ambitious double-track northern rail route project from Den Chai in Phrae to Chiang Khong in Chiang Rai is set for completion in 2023, two years ahead of schedule….it has faced many delays, including the need to conduct a new study in 2004 on how it will connect with China’s initiative to expand rail networks southward.

Once completed, the new route will link up to a railroad in Laos which will run to Kunming, a transportation hub in China’s southern Yunnan province.”

Northern double-track railway to Mekong to open 2023 – [09/08/18]
“The ministry had asked the State Railway of Thailand (SRT) to speed up construction of the much-awaited line so that it could open in 2023, ahead of the originally scheduled 2025, he said.”

Dual-Track Railway Project in the North Wins Cabinet Approval – [03/08/18]
“The dual-track railway project on the Den Chai – Chiang Rai – Chiang Khong route was proposed by the Ministry of Transport. It aims to expand the railway network in the Upper North and connect with Lao PDR, Myanmar, and southern China. Construction is expected to begin in 2019.”

SRT pushes double-track rail proposals – [10/06/18]
“The State Railways of Thailand (SRT) is expected in the next few weeks to table before the Cabinet a plan to build the Denchai-Chiang Rai-Chiang Kong double-track rail line worth Bt76 billion, according to SRT acting director Worawut Mala.”

The track to Chiang Rai, joining the main northern route at Den Chai station in Phrae, has been slated for building since 1960.

Half a century and 17 prime ministers later, no work has been conducted. The only progress is a preliminary feasibility study carried out in 1997.

Now the SRT believes there might be a chance the project will actually go ahead, as the government is showing a keen interest.”