Shwe Kokko New City is a planned new urban area and casino city in Myanmar. The development is at the township of Shwe Kokko (also transliterated as Swe Koke Ko) on the Moei River, which forms the Myanmar-Thailand border.

According to the developer, the new city will include housing, an entertainment complex with hotels and casinos, an industrial zone with a cargo depot, and an airport. The city will have its own cryptocurrency developed in partnership with Building Cities Beyond (BCB) Blockchain.

Shwe Kokko New City is being developed by Hong Kong-registered developer Yatai International Holding Group (Yatai IHG), in partnership with Chit Lin Myaing Company owned by the Kayin State Border Guard Force (BGF). The BGF operates as a law unto themselves, and this development has not been planned or officially endorsed by the Naypyitaw government.

The original approved plan was for a 0.1 sq. km development. Now according to the developers website the site covers 120,000,000 sq. m (120 sq. Km) with an estimated investment value of 15 billion USD.

The project has been promoted as being part of China’s Belt and Road Initiative, but the Chinese Embassy in Myanmar has has said it’s not. There is also no approval to build an airport as it would be too close to Mae Sot airport in Thailand.

In August 2020 it was reported that there were at least 17 casinos operating along the Moei River, which has lead to Shwe Kokko as being described as the new Sihanoukville. It’s an apt comparison as some of the Chinese-run gaming companies that were driven out of Sihanoukville have found their way here. Adding to the layers of confusion and misinformation, the Myanmar government has said that casinos are not allowed so far in Shwe Kokko.

It’s also been promoted as the “Myanmar Yatai Shwe Kokko Special Economic Zone”, though it’s not an SEZ either. If the government was to approve an SEZ, it would make more sense to have it near the city of Myawaddy. This is at the Mae Sot Thai border crossing and on the highway that forms part of the East-West Economic Corridor.

There is currently no border crossing at Shwe Kokko, and to get there by road in Myanmar involves going via Myawaddy. Mae Sot has been expanded to accommodate international flights, with the intention of handling flights from Myanmar and China. So far there are only domestic flights, so Shwe Kokko is sustained by Chinese that are already in Myanmar.

For more editorial on Shwe Kokko, subscribe to the Living In Asia Newsletter. This paid subscriber newsletter is published every week and it helps support the work of this site, covering transport and construction stories in Southeast Asia. 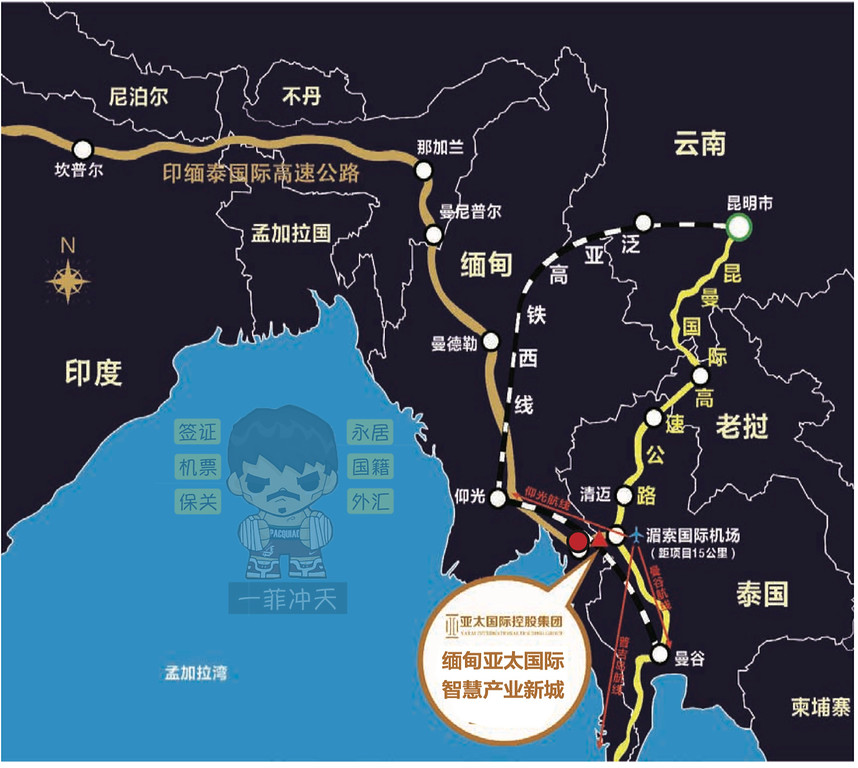 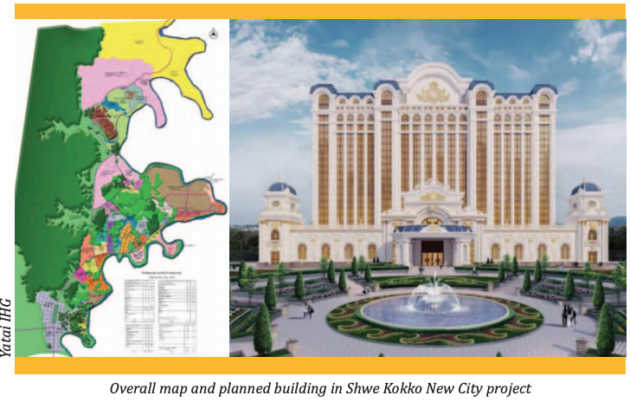 Scam City: How the coup brought Shwe Kokko back to life
“The Karen Border Guard Force is providing the military with frontline soldiers in exchange for business protection, allowing its “new city” project to emerge as a hub for online scams.”

Chinese casino city in Myanmar recruiting despite COVID-19 crisis – [19/07/21]
“Amid Myanmar’s COVID-19 spike, the developer of the controversial China-backed Shwe Kokko new city project near the Thai border in Karen State has been recruiting staff, prompting fears over a rise in cross-border crime.”

Local militia officer behind controversial Chinese casino hub on Thai-Myanmar border quits – [11/01/21]
“Major Saw Maw Tho, also known as Saw Mote Thone, who was the second-highest-ranking officer in the Karen State Border Guard Force (BGF), which is implementing a new city project with alleged ties to Chinese mafia on the Myanmar-Thai border, resigned on Saturday, according to sources with Myanmar’s military and the BGF.”

Why the US bit back at China’s ‘Broken Tooth’ – [12/12/20]
“Less than a decade ago, Wan Kuok Koi, alias “Broken Tooth”, was incarcerated in a purpose-built top-security detention facility in Macau on charges of involvement in an illegal organization. Today, he freely runs an apparently highly profitable business empire across Hong Kong, Cambodia, Malaysia, Palau and Myanmar, including the mysterious and controversial Shwe Kokko new city being built in a remote area on the Moei river bordering Thailand.”

Incoming Myanmar govt must tackle Chinese casino haven in Myawaddy – [26/10/20]
“Myanmar’s new government will have a long to-do list. One of the issues it will have to scrutinize is what’s going on in Shwe Kokko, a village in Karen State’s Myawaddy Township near the Thai border.”

Yatai IHG may seek to co-opt Myanmar government officials through dubious connections – [06/10/20]
“In August, the Chinese Embassy in Yangon expressed support for Myanmar’s move to investigate irregularities surrounding a controversial new city development near the Thai border in Karen State run by Chinese investors accused of illegal casino activities in Cambodia and the Philippines.”

‘New City’ on Thai-Myanmar border part of BRI despite China’s denials, developer claims – [01/09/20]
“The Chinese developer of a shady “new city” project on the Myanmar-Thai border—a company with links to illicit cryptocurrency and casino operations—has insisted the project is part of China’s Belt and Road Initiative, despite an assertion to the contrary by the Chinese Embassy in Myanmar.” 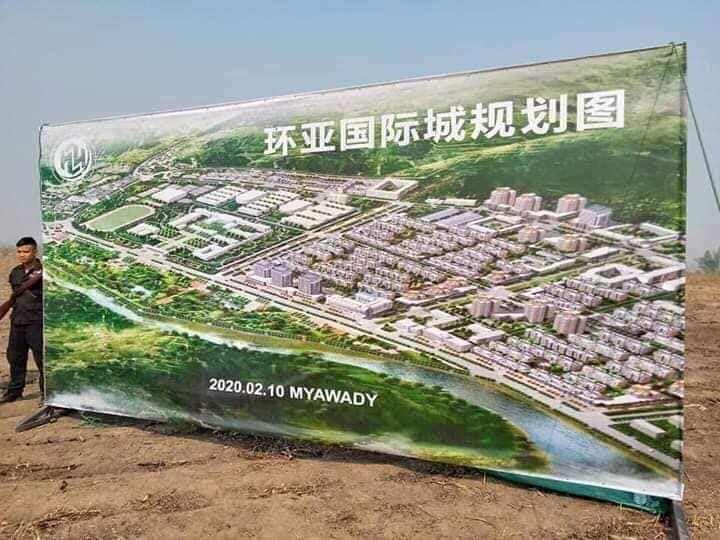 “According to local lawmakers, there are at least 17 casinos along the Moei River, jointly operated by armed groups and Chinese investors. “All casinos are illegal, untaxed and ungoverned by authority. Armed groups operated casinos in cooperation with foreign investors, mainly Chinese,” said Sein Bo, lower house lawmaker from Myawaddy township.”

Myanmar to probe casinos in China-backed developer’s ‘rogue city’ – [12/08/20]
“A $15 billion urban development project in Myanmar near the Thai border has been a source of controversy from the very start, underscoring the pitfalls of lax regulatory oversight in Southeast Asia’s last frontier market.”

Myanmar’s casino cities: the role of China and transnational criminal networks – [27/07/20]
“Seeking to profit from China’s lucrative but illegal gambling market, a shady web of actors has begun building resort cities in Myanmar’s Karen State to cater to Chinese gamblers. This report casts light on the actors behind Myanmar’s illegal gambling sector, their linkages to Chinese government entities and to Myanmar’s armed groups and military, and how their actions could upend Myanmar’s prospects for peace.”

The mystery man behind the Shwe Kokko project – [07/07/20]
“The main investor in a controversial Kayin State mega project is an expatriate Chinese businessman who has a built a commercial empire in Southeast Asia by fudging connections with the Chinese state.” 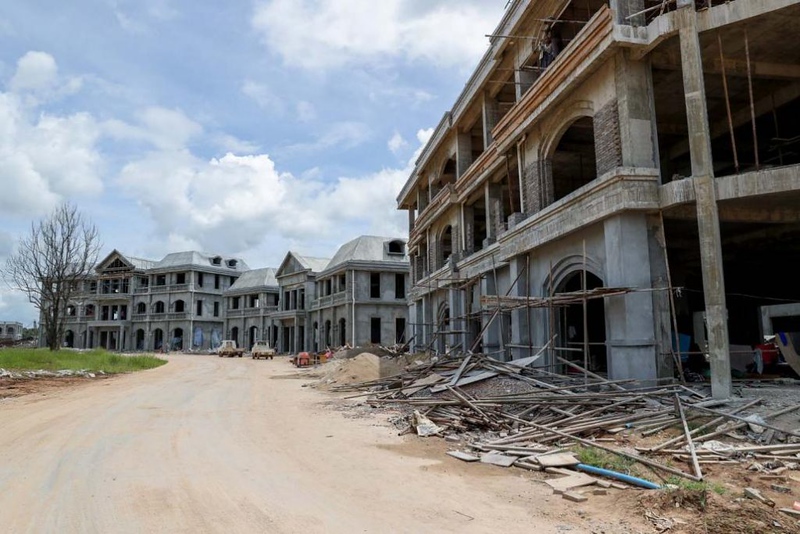 ‘Gambling Away Our Land’; KPSN report raises questions about Shwe Kokko extension project – [29/03/20]
“A new report titled “Gambling Away Our Land” published by the Karen Peace Support Network (KPSN) details how a mega development known as the Shwe Kokko project will have no benefit for local Karen people, and will serve only the interests of transnational gambling mafias and Burma’s ruling military.” 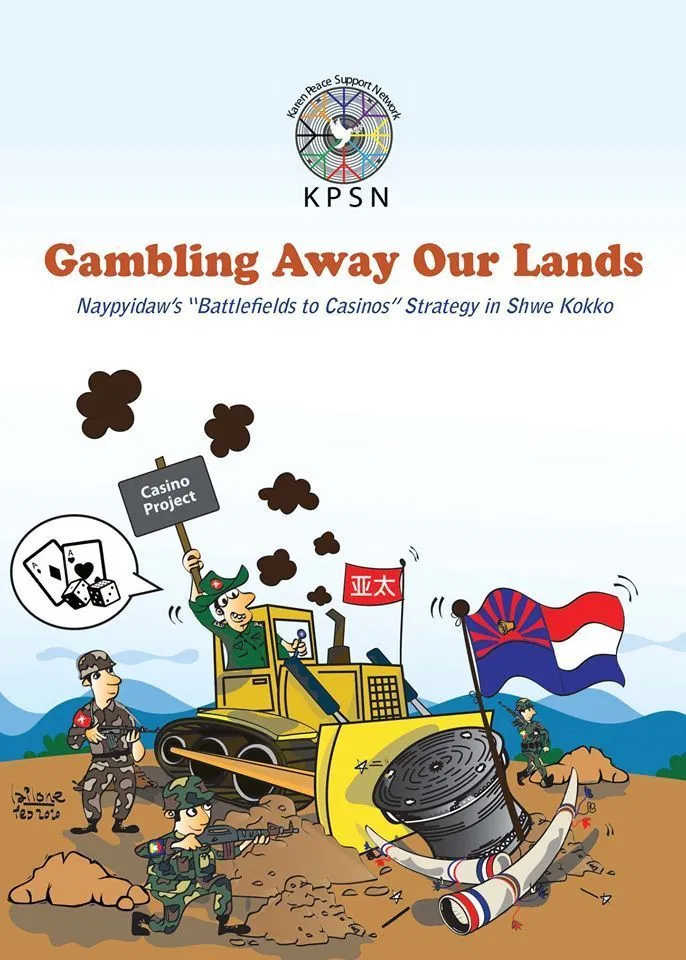 Shwe Koko: big winners – Burma Army and international crime syndicates at expense of Karen people – KNU, community groups want it stopped – [26/03/20]
“Plans to turn rice fields running from the River Moei up into the Dawna Mountain Range into a giant construction site of large concrete houses, apartment blocks, casinos and an international airport are causing concerns for Karen community groups. The grand plan to turn thousands of acres of Karen land surrounding the small village of Shwe Koko into a mega complex housing hundreds of thousands of people.” 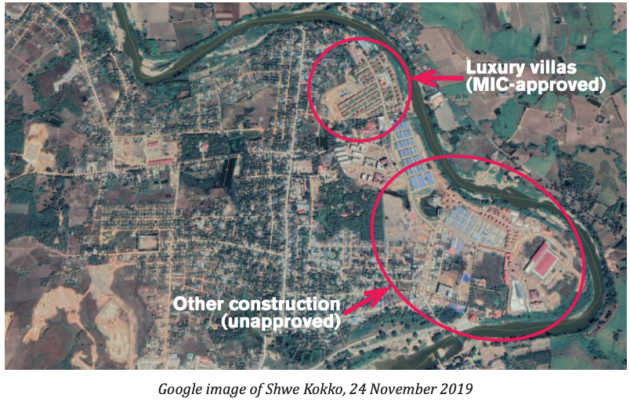 Shwe Kokko – A secret Chinese city – [10/02/20]
“The most important trade route between Myanmar and Thailand is located in Myanmar’s Kayin State where the Friendship Bridge links Myanmar’s Myawaddy town to the Thai town of Mae Sot. Despite the existence of this already bustling centre of trade, work recently and quietly commenced on a vast development project at Shwe Kokko, a tiny fishing village, less than 15 kms north of Myawaddy.” 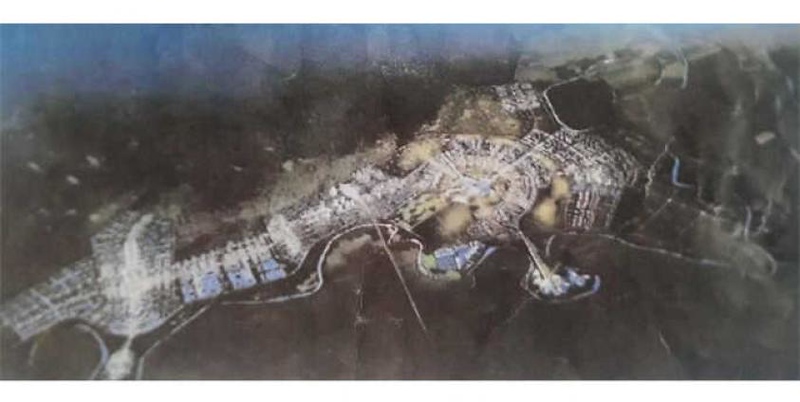 Chinese mega-project in Myanmar’s Kayin state sparks resentment and worry – [13/11/19]
“The Chinese-backed U.S. $15 billion real estate mega-project along the Thaungyin River in southeastern Myanmar’s Kayin state has been dubbed Shwe Kokko “Chinatown” by locals. It sits about 12 miles from the state capital Myawaddy and a 10-minute drive to the Thai town of Mae Sot.” 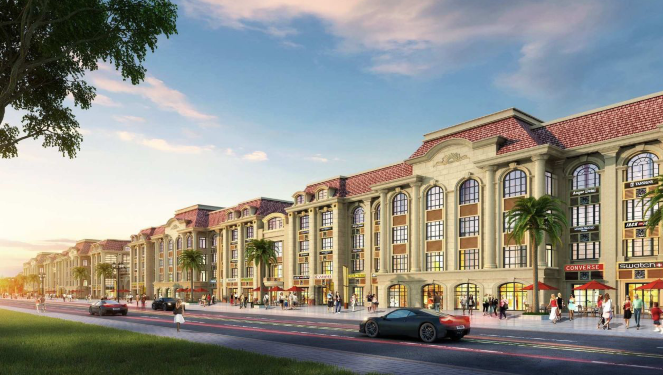 Shwe Kokko: A paradise for Chinese investment – [05/09/19]
“A Border Guard Force and a Chinese company have teamed up to build a hi-tech city on the border north of Myawaddy, with seemingly little regard for Myanmar law and the livelihoods of the local Karen.” 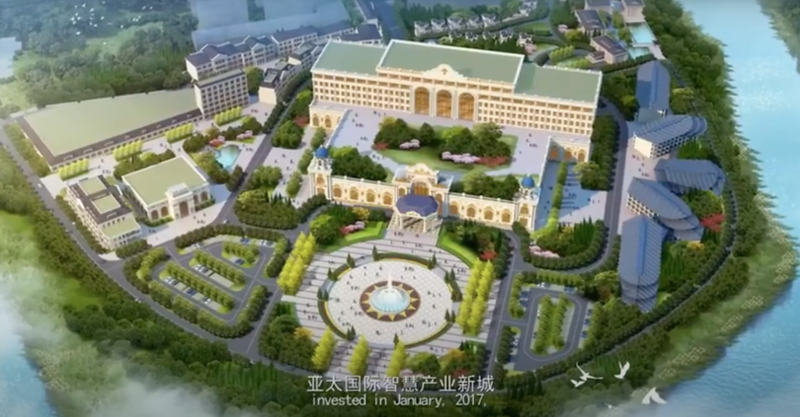 A Chinatown mysteriously emerges in backwoods Myanmar – [01/03/19]
“Shwe Kokko, a remote town along Myanmar’s Moei River, is the latest odd and bold outpost of China’s Belt and Road Initiative.”