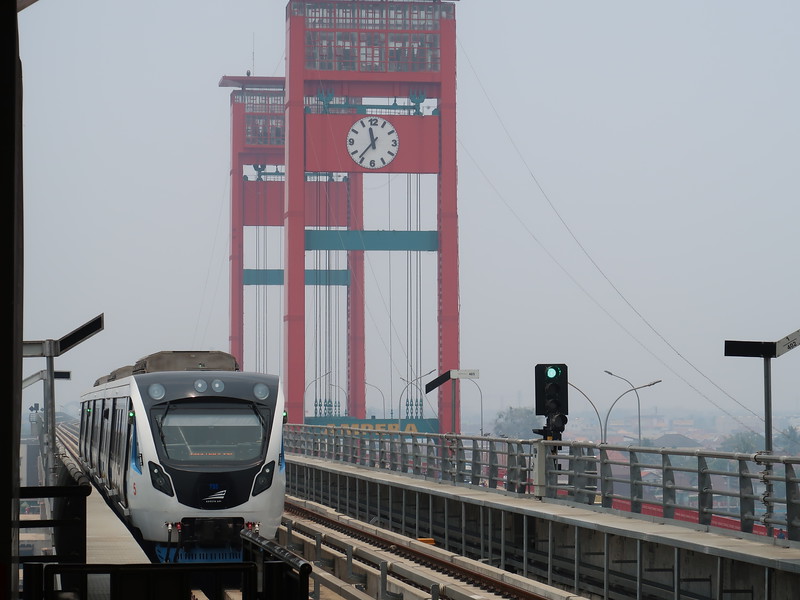 The Palembang LRT (or South Sumatra Light Rail Transit) is a light rail transit system in Palembang, South Sumatra, Indonesia. The single-line system connects Sultan Mahmud Badaruddin II International Airport to Jakabaring Sport City. The line was built to service the 2018 Asian Games, which Palembang co-hosted with Jakarta. It has the distinction of being the first light rail transit in Indonesia, beating Jakarta to this honour.

The Palembang LRT began construction in 2015, and it entered operations on 1 August 2018, just before the opening of the games on 18 August. Not all of the stations were open at the start, so the remaining work was completed by May 2019. The line covers 23.4 km with 13 stations and a depot. The final cost of construction was Rp 10.9 trillion ($755 million USD).

There doesn’t appear to be an official map or an official website. The best map available is by a map enthusiast who has integrated the LRT with other transport systems in Palembang.

Governance and administrative process of the Light Rail Train project in Palembang, Indonesia
“The paper investigates the governance and administrative process in the Palembang Light Rail Train (LRT) project in Indonesia and gives suggestions on the strategic development of the LRT project for creating a desakota technopole in Palembang.”

Photos from my visit to Palembang in September 2019 (here is my Palembang trip report). 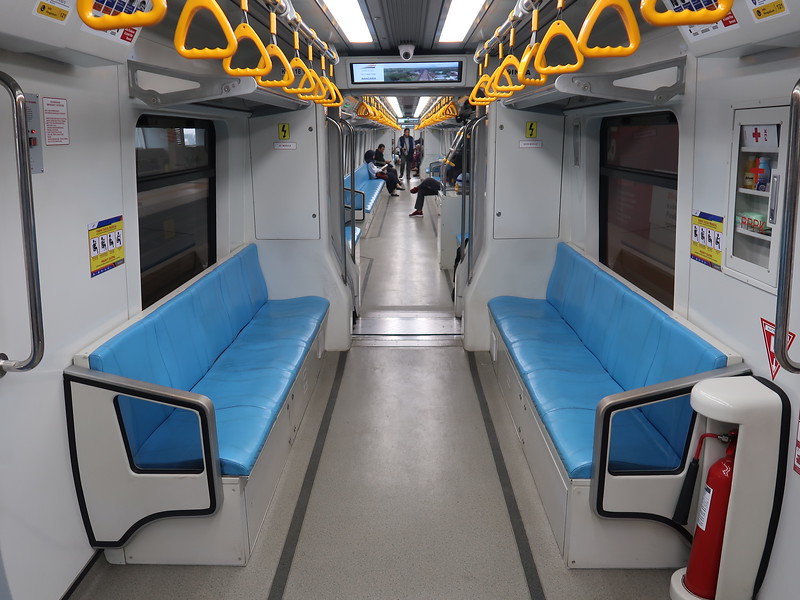 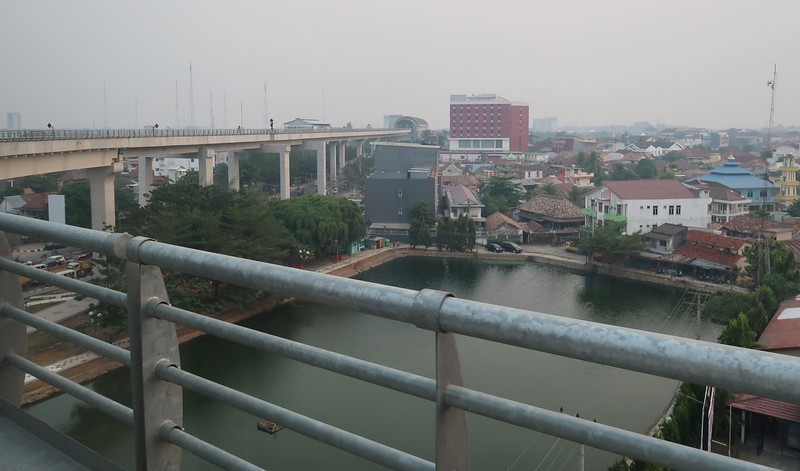 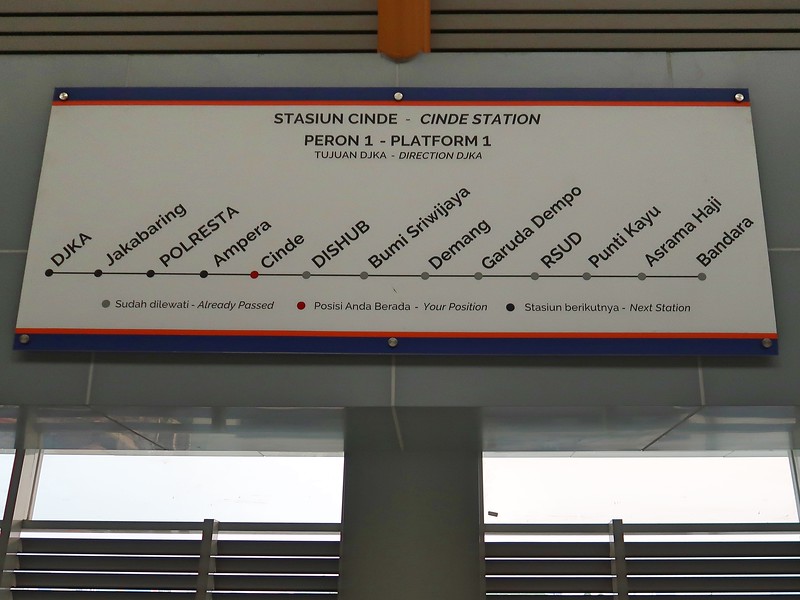 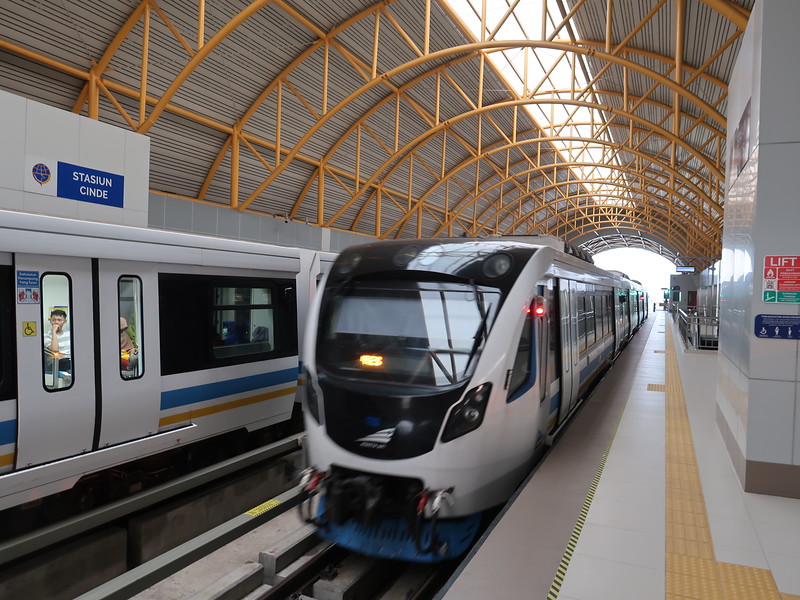 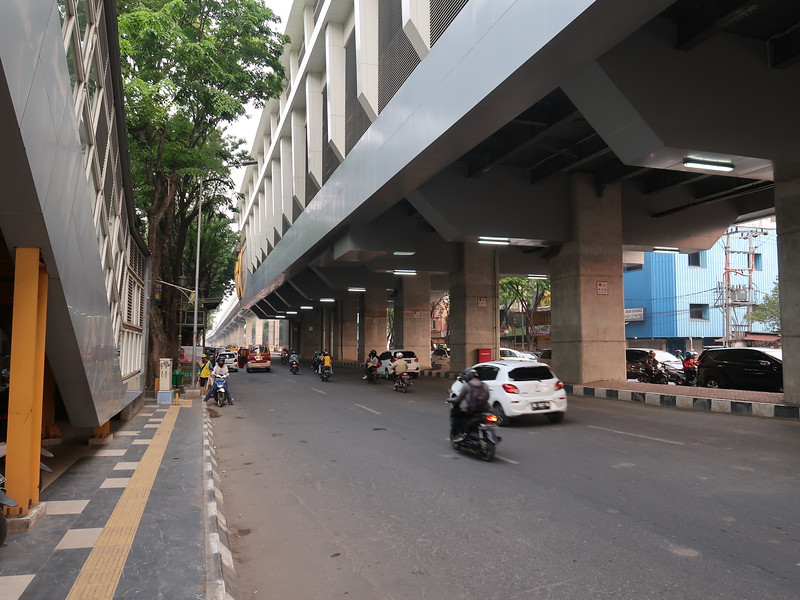 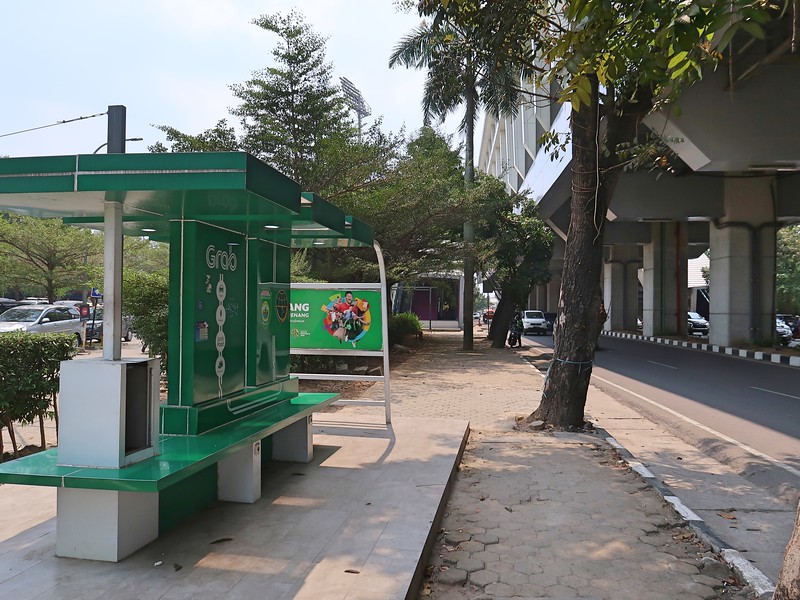 [Grab taxi stop next to a station.] 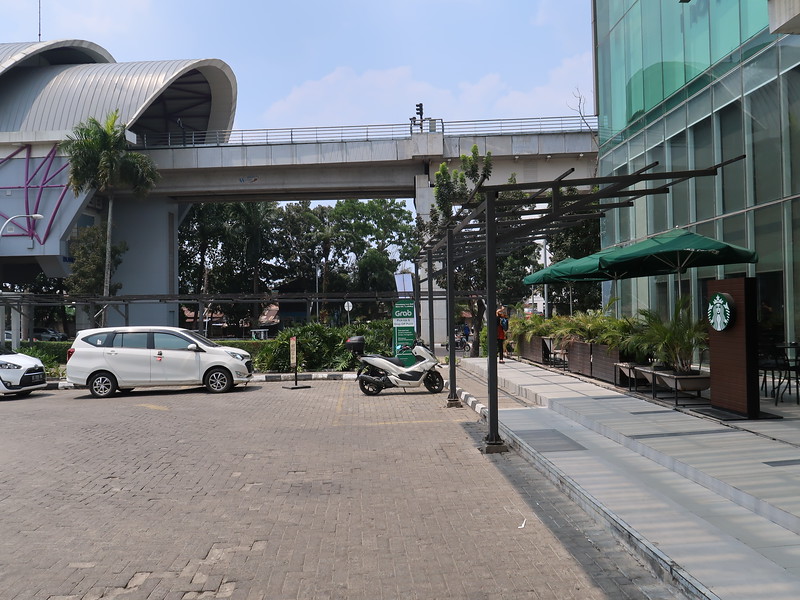 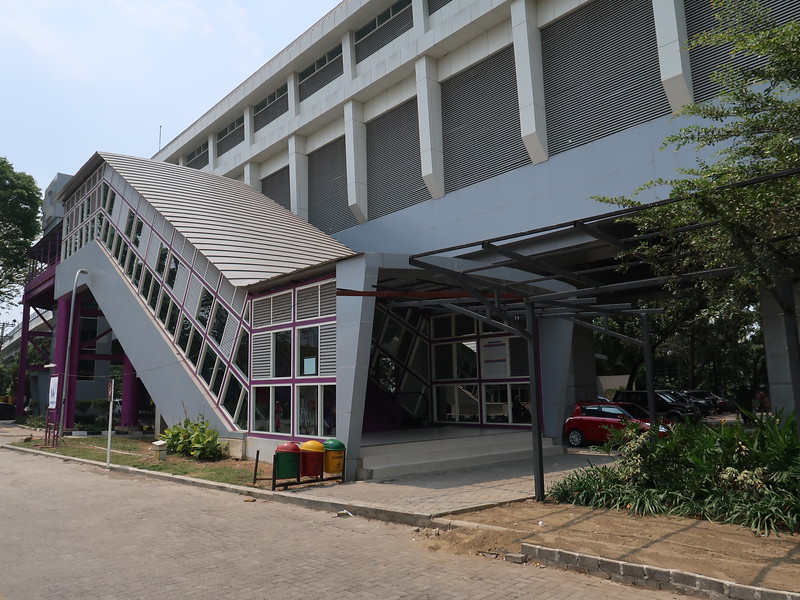 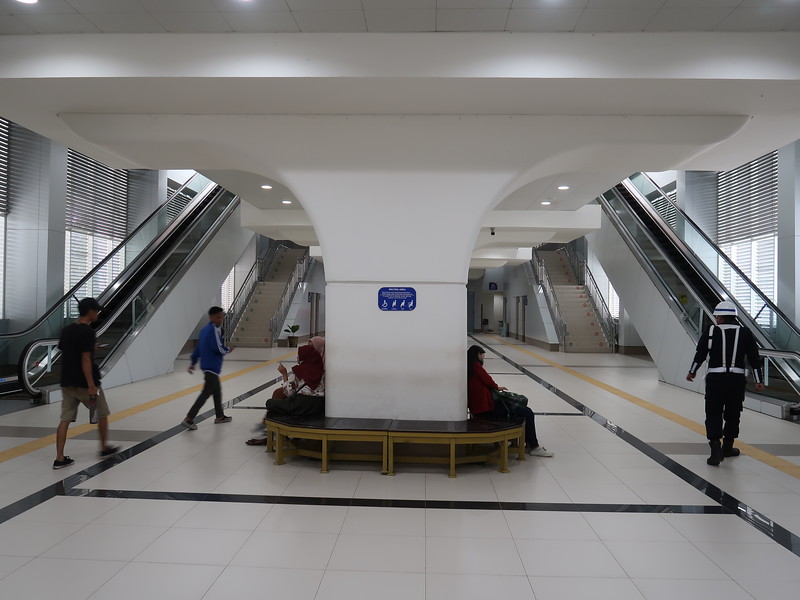 Palembang’s LRT given speed boost to attract commuters – [01/10/19]
“To encourage more people to use the LRT line in Palembang, South Sumatra, its speed has been increased and its integration with other modes of public transportation improved.”

Government plans fare cut for Palembang LRT to attract passengers – [29/10/18]
“”We have decided to cut the fare from Rp 10,000 (66 US cents) to, for example, Rp 7,000,” Budi said in a press statement on Sunday, adding that the fare cut was part of a plan to integrate the LRT service with Palembang’s public buses.”

Palembang ruffled by fire, LRT malfunction ahead of Asian Games – [14/08/18]
“…the Transportation Ministry vowed on Monday to start investigating a series of malfunctions that have plagued its first light rapid transit (LRT) system.”

The Palembang LRT broke down many times, the Ministry of Transportation conducted a total evaluation – [13/08/18]

Palembang LRT line cheaper than in Malaysia, Philippines – [26/06/18]
“The light-rail transit system in Palembang, South Sumatra, which is set to be ready for the 2018 Asian Games in August, cost a fraction of similar projects in Malaysia and the Philippines, the government said.”

Palembang ready to Operate 6 LRT stations in July – [12/06/18]
“Six out of 13 Light Rail Transit (LRT) stations are ready to operate in mid-July, which is when they will be inaugurated by President Joko ‘Jokowi’ Widodo. The remaining seven stations are still in construction.”

Palembang LRT on Track Ahead of Asian Games 2018 Thanks to Minister – [23/05/17]
“Palembang’s vital Light Rail Transit development will receive a financial boost to ensure its completion ahead of the Asian Games 2018, Minister of Transportation Budi Karya Sumadi said Saturday, May 20.” 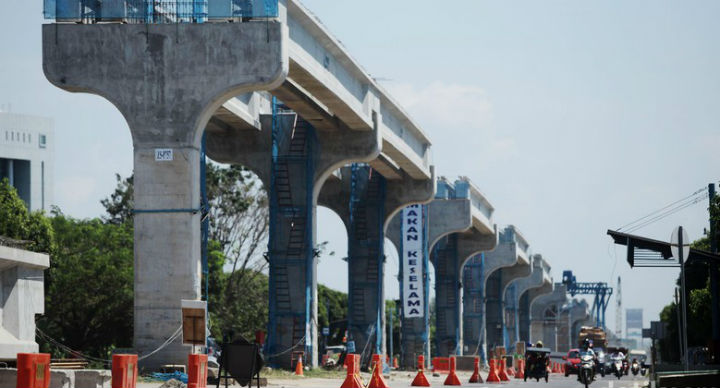 Palembang, Jakarta LRT projects on track: Minister – [06/02/17]
“The government has confirmed that the two light rail transit (LRT) projects in Jakarta and Palembang, South Sumatra, are on track to meet the target deadlines for completion.”

Palembang airport to be revamped for 2018 Asian Games – [14/10/16]
“The plans reportedly include building a skybridge to connect Palembang’s Sultan Mahmud Badaruddin II International Airport with a light rail transit (LRT) terminal that will take passengers to Jakabaring.”

Govt aims to complete LRT project before Asian Games – [19/08/16]
“Transportation Minister Budi Sumadi has promised to complete the light rail transit (LRT) project in Palembang, South Sumatra before the cauldron of the quadrennial sporting event Asian Games is lit in 2018.”

Waskita to develop LRT in Palembang for Asian Games – [05/11/15]
“State-run construction company Waskita Karya will develop a light rapid transit (LRT) system in Palembang, South Sumatra, next year after its appointment by the government to lead the Rp 7 trillion (US$518.62 million) project.” 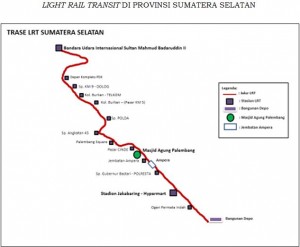