Nha Trang is usually one of the most popular beach resort cities in Vietnam. The city was going through a massive construction boom up until 2019, and then 2020 happened.

Vietnam closed its international borders almost completely in March 2020, and they were able to stop the virus from spreading for most of the year. This was bad news for tourism-reliant destinations like Nha Trang though, which relied heavily on international tourism.

I ended up spending most of 2020 in Vietnam, and I was able to travel freely within the country during this time. I visited Nha Trang in October/November 2020, and it was evident that the tourism sector was hit hard by the international lockout. I did a construction report for Nha Trang, and there were some ongoing projects that had momentum from the 2019 boom.

I returned to Nha Trang almost two years after that visit to see how it is recovering. While international borders have reopened, the tourism sector is still a long way from recovery. The closed shops in the main hotel area are a reminder that things are still not quite right.

In my Vietnam aviation report for 2019 I reported that there were flights to Cam Ranh Airport from 30 cities in mainland China every week. On the Cam Ranh Airport website it showed just four international arrivals for one of days when I was there (Bangkok, Kuala Lumpur, Seoul, and Busan).

Nha Trang would have reasonably expected its tourism economy to rebound in 2022, but its two biggest markets are missing. China has not reopened its international borders, and Russians have not returned since Russia invaded Ukraine. Even though Vietnam has remained loyal to its long-time ally, international sanctions have affected Russians being able to travel internationally. 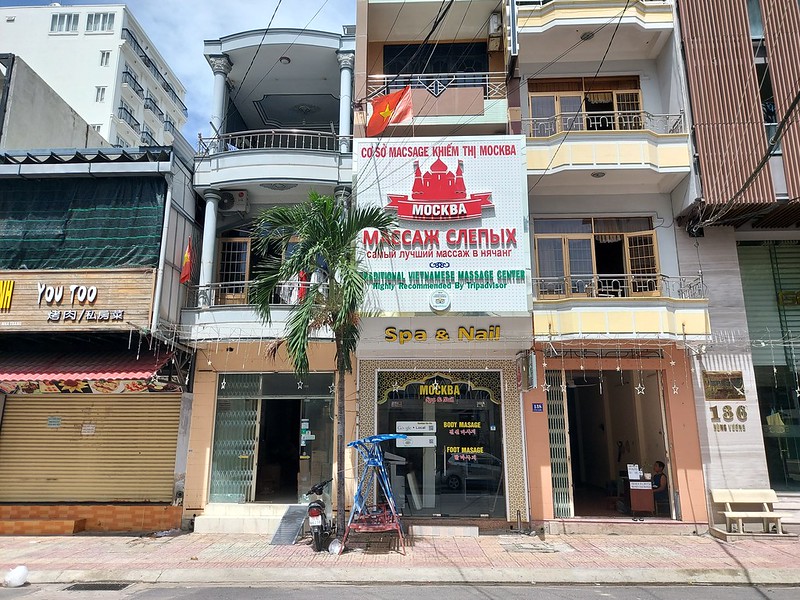 The lack of international tourists in Nha Trang is still noticeable. What was also noticeable to me was that the city felt finished. Looking at the skyline from the beach, there were no cranes that were visible, and the towers that weren’t finished at least looked finished from a distance. Compare that with Da Nang, where the beach area has felt like a non-stop construction site for years. 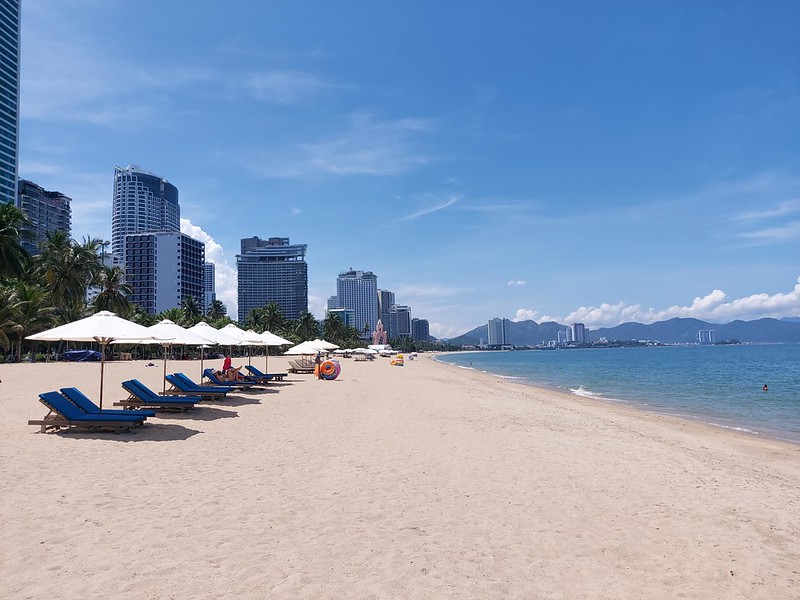 Here are some of the most prominent construction projects in Nha Trang as of August 2022.

This map shows the places mentioned in this article. A full list of projects can be viewed at Future Nha Trang. 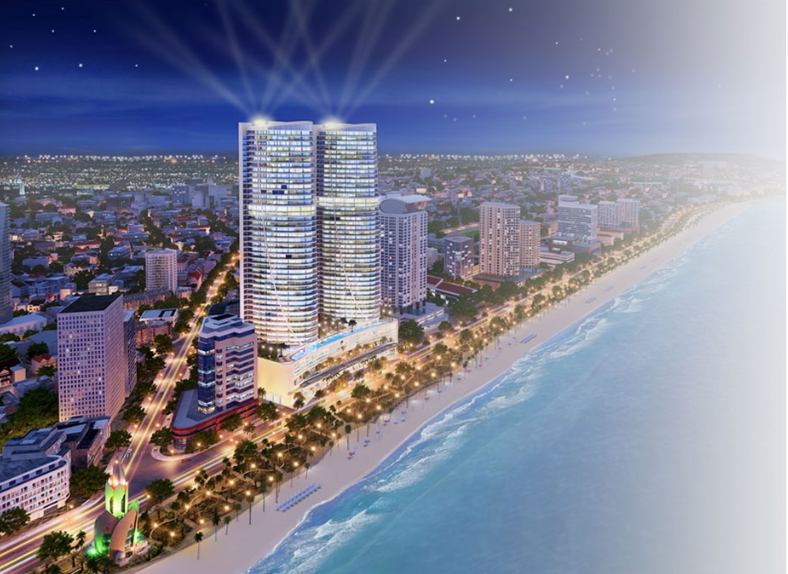 Tropicana Nha Trang (also known as Beau Rivage Nha Trang) is in a prime location on the main seafront road. The project had stalled when I visited in 2020, so this was the first project I wanted to see in 2022. Unfortunately, this still remains stalled. Since my last visit, some scaffolding has been removed, but the exposed rebar and cranes have only accumulated more rust.

There is still some advertising around the city that shows what the final form might look like, though there is no mention of when it will resume construction. 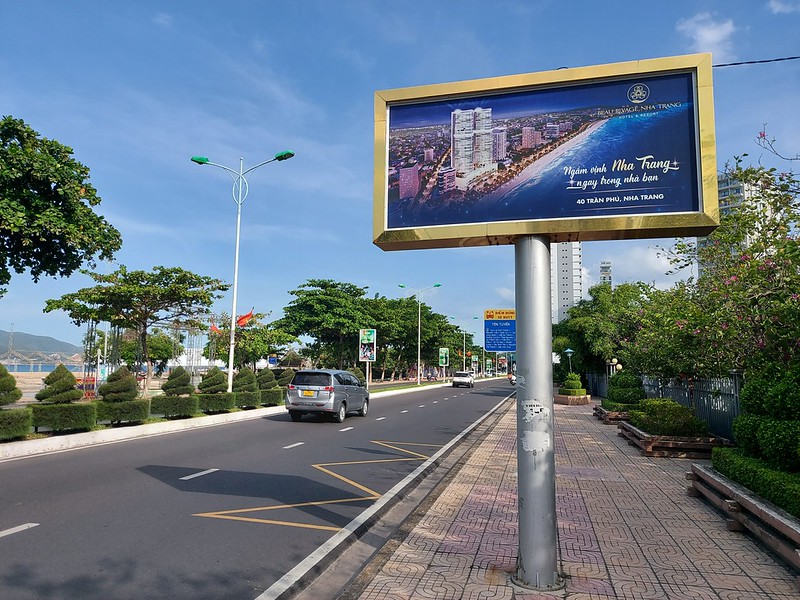 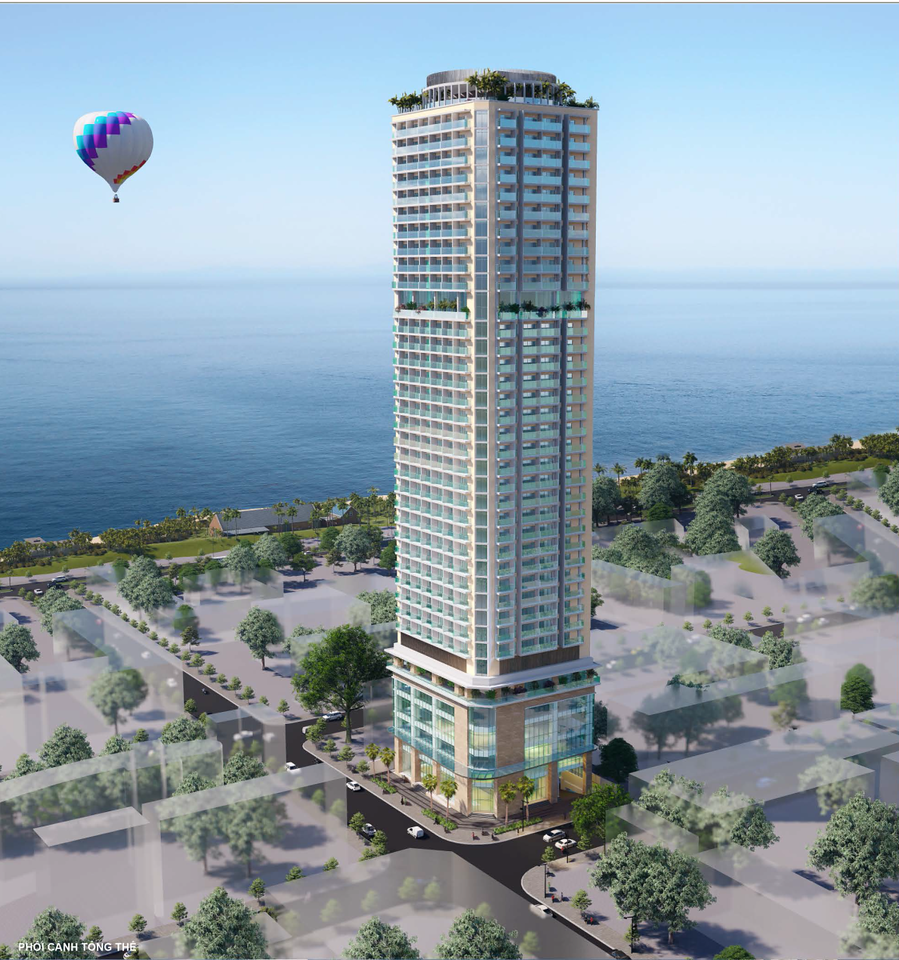 Hoàng An – Nha Trang Hotel & Condotel (also being advertised as Hoang Yen) had topped out when I last saw it. I thought it was either going to be finished or stalled. I was wrong on both counts, because it was still under construction.

The scaffolding had been removed from the building but it was still not finished.

There were workers on site, so this is officially still active. 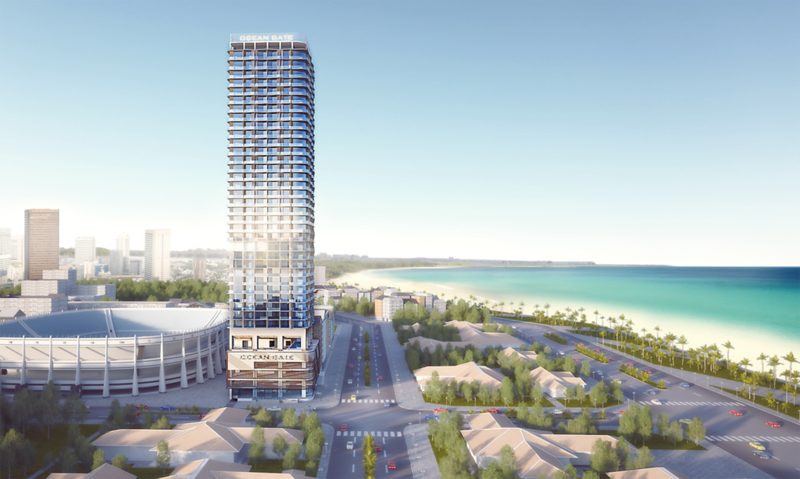 Ocean Gate appeared to be completed from a distance. The last time I saw this building there was a construction lift still attached to the side.

I walked to the building to find that it too has not been finished. 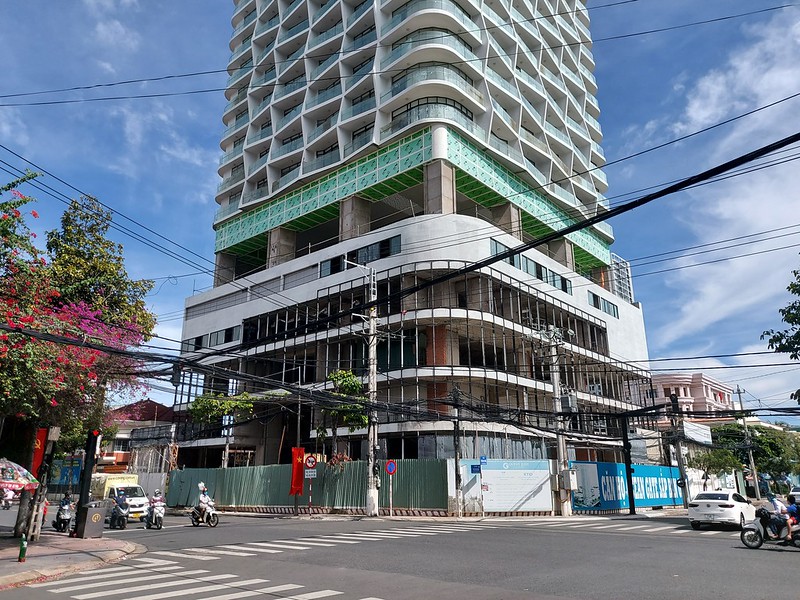 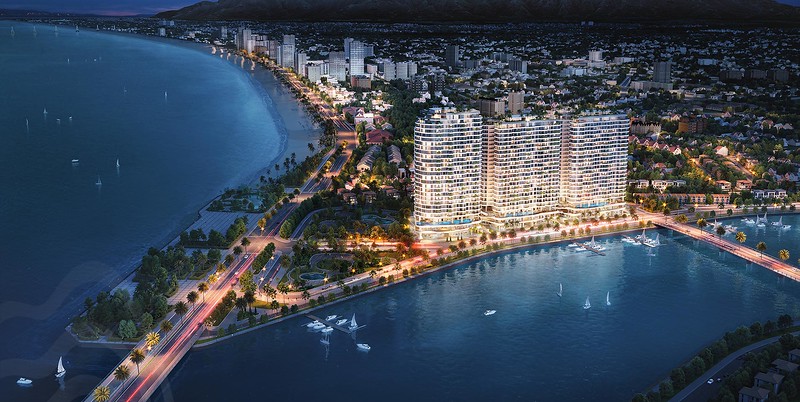 The Aston is a 3-tower apartment development facing the Cai River. This project was doing presales when I visited in 2020, and I’ve seen this advertised in airports around the country. It got started, but it has since stalled. 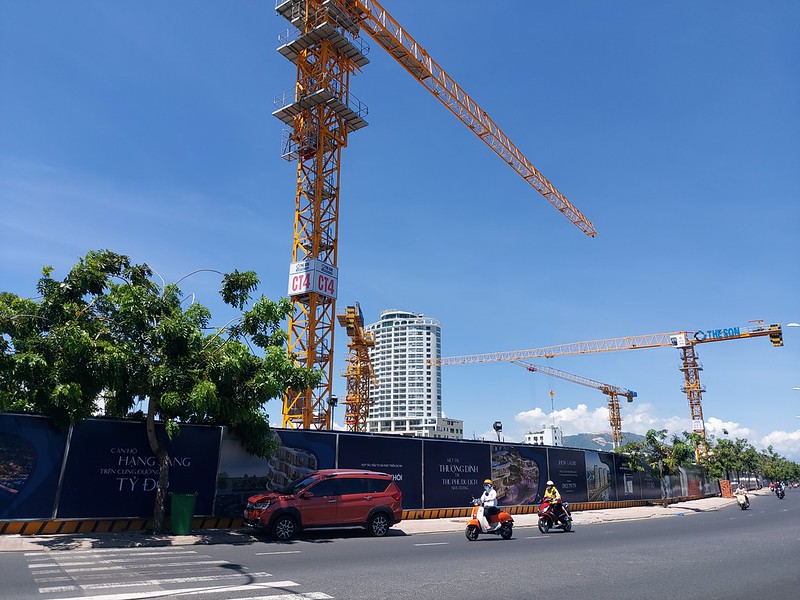 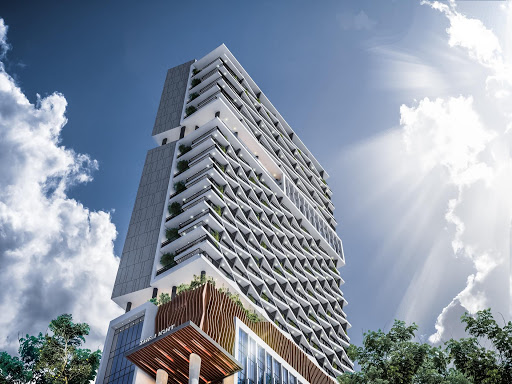 The Light Holiday Hotel is another project that was nearly finished when I visited in 2020, and it too has ground to a halt.

The ground floor is decorated with bamboo, and some progress was made before the project stalled.

Imperium Town was one of the few active construction sites in the city centre. 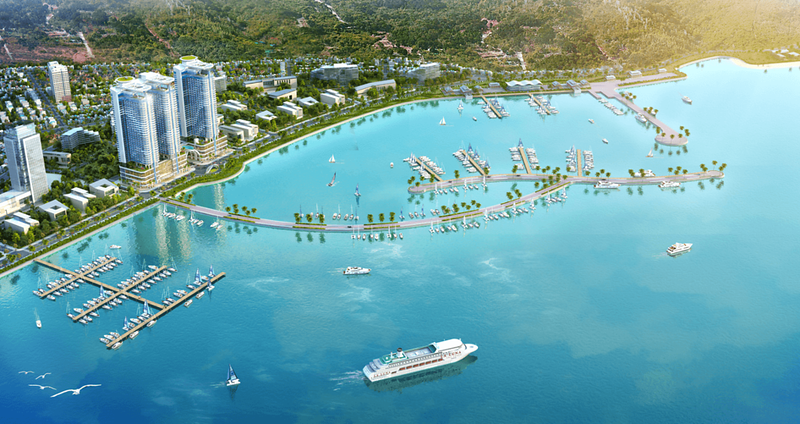 Swiss Touches La Luna features three towers overlooking the northern end of Nha Trang Bay. The three towers were completed just in time for the pandemic to close down the country in 2020. The towers have not changed since my last visit, and this is now the biggest stalled/abandoned project in Nha Trang.

The website has gone offline, and it was last cached on the web archive in June 2021. There is a LinkedIn account with no mention of what has happened. 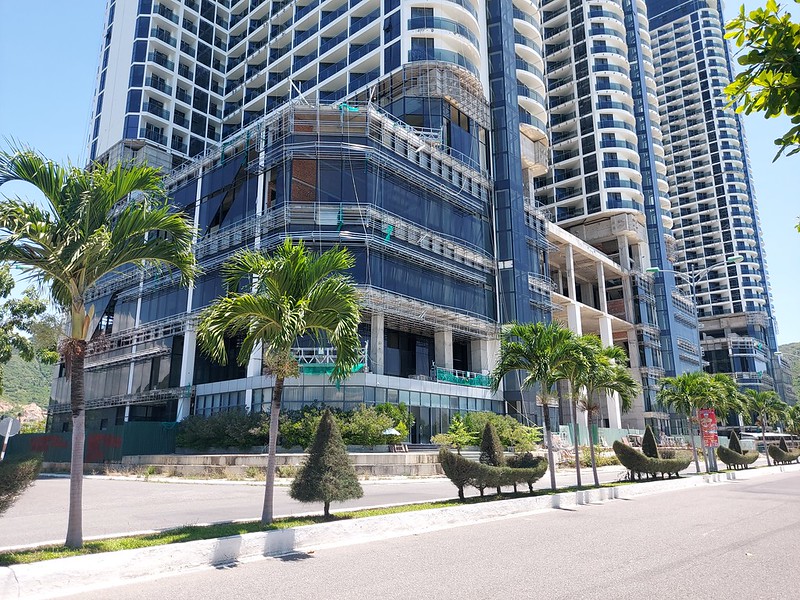 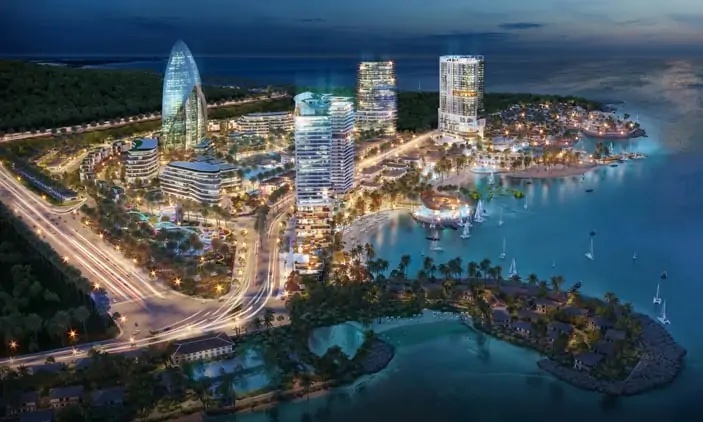 Vega City is a development at the northern tip of Nha Trang Bay, 12 km from the city centre. Since my last visit in 2020, Vega City can now be seen from the main beach of Nha Trang.

I rode there to have a look, and the site was busy with construction activity. Last time I was able to drive along the road. This time the road was blocked off to public traffic.

Vega City is home to Gran Meliá Nha Trang. They have set up a showroom and sales office in Ho Chi Minh City, and there you can see a scale model of the project.