The Pattaya Monorail is a proposed urban rail transit system that would connect the future Pattaya high-speed railway station with the popular beach area of the city.

The monorail was first proposed in 2008, and since then it’s gone from monorail to tram/light rail, subway, and back to monorail. The routes have varied over this time, and there are also two other proposed lines.

The most recent update is for a monorail (Green Line) beginning at the Pattaya station for the Bangkok-U-Tapao high-speed railway. From there is will travel along North Pattaya Road, 2nd Road, then turning at Thappraya Road to terminate at Bali Hai Pier. The line will be 8.15 km long with 13 elevated stations. The latest estimates have construction beginning in 2023 and be completed in 2026.

Other future lines include the Purple line from Thub Phraya intersection to Nong Prue, and the Red line from Dolphin circle (Patthaya Nuea) to Eastern Region National Stadium. 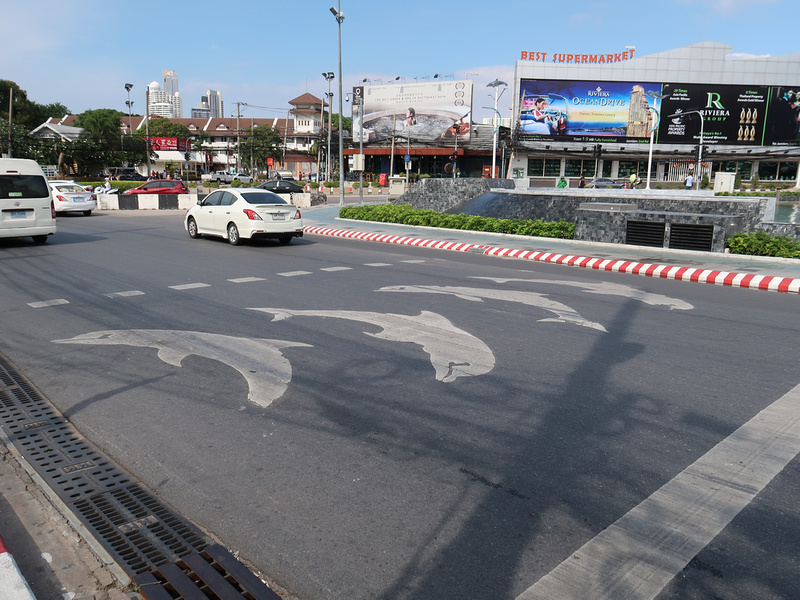 There is also a proposal for a commuter railway (Yellow Line) on the current SRT railway line, which will become redundant once the high-speed line is built. This would run from Sri Racha to U-Tapao, with a transfer junction at Pattaya for the Green Lone monorail and high-speed railway. 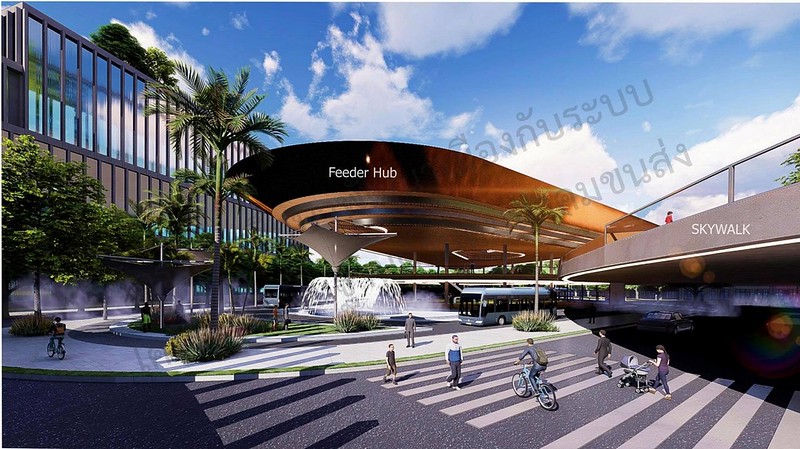 If those lines ever get built this page should become “Pattaya Transit System”.

This map includes the approxomate stops of the first monorail line, and some of the stops on the other proposed lines. This is for illustrative purposes only.

Another map showing the four proposed lines with the high-speed railway, and the dashed lines are bus routes. 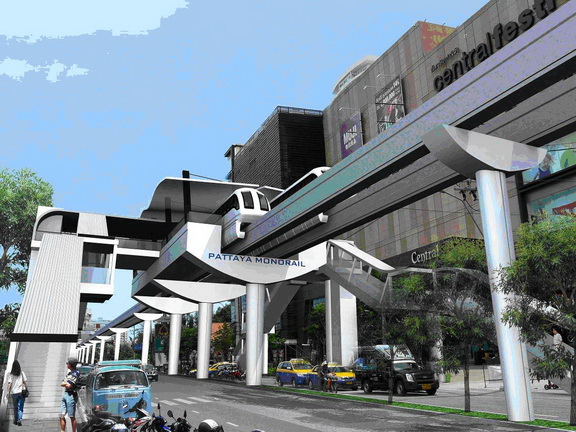 Pattaya buys out monorail study contract – [22/02/22]
“The Pattaya City Council approved a 1.9-million-baht payout to a consultant for the suspended city monorail project.”

French ambassador discusses monorail development with Pattaya mayor – [03/12/20]
“France’s ambassador to Thailand discussed a possible role for his country in developing the planned Pattaya monorail and the Eastern Economic Corridor during a visit here.”

Pattaya light railway plans take shape – [07/10/20]
“A feasibility study on a light rail network for Pattaya is nearly complete and will be submitted to the city’s council and the cabinet for consideration soon, the study’s coordinator said.” 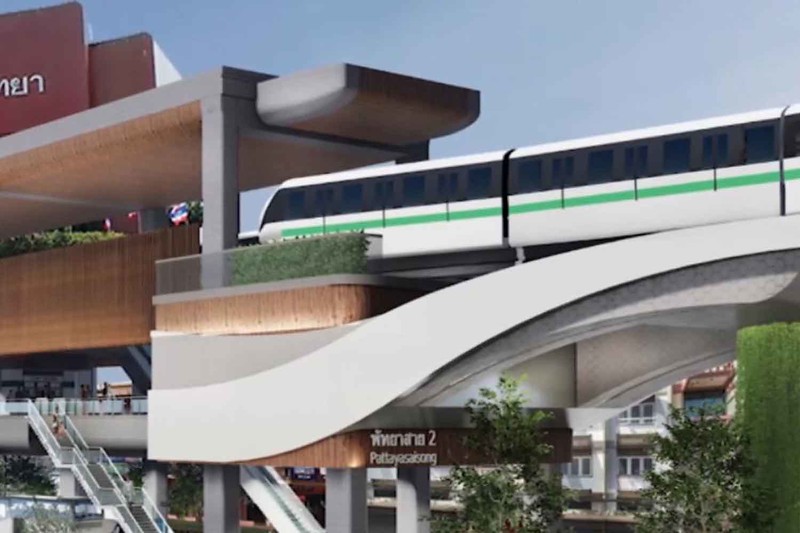 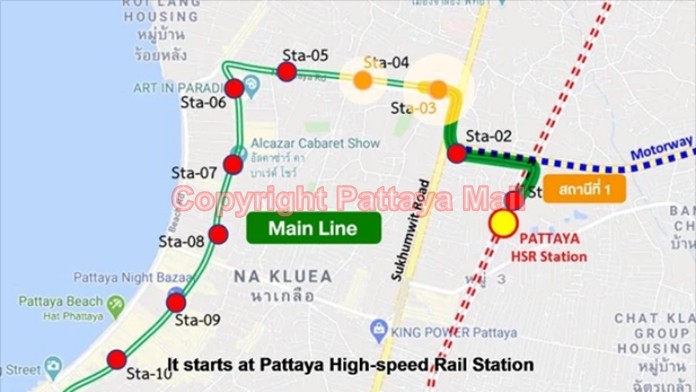 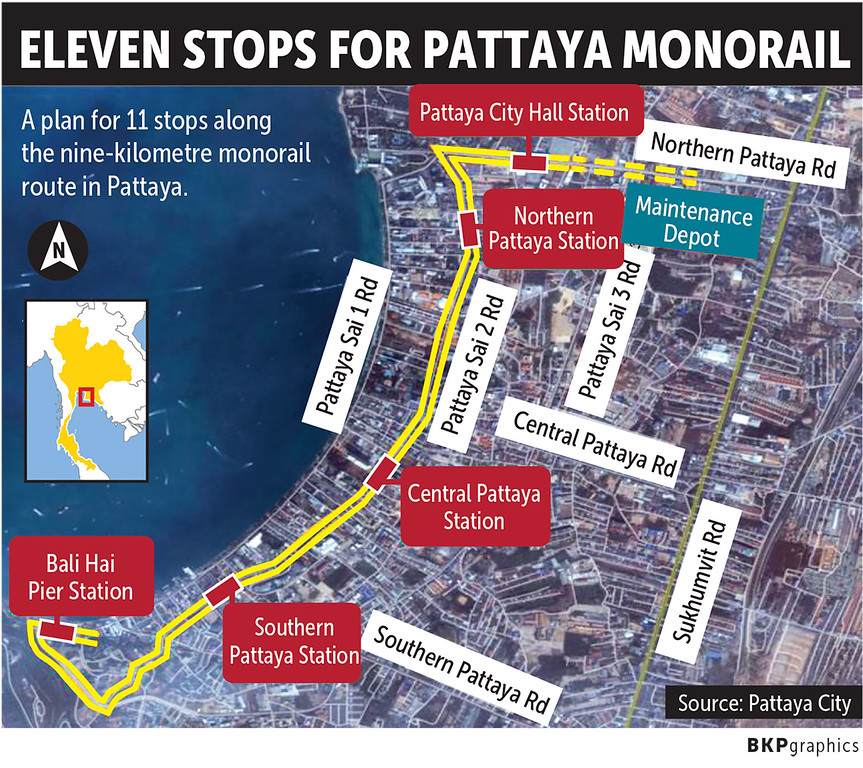 70 million baht set aside for planning and EIS for new light rail in Pattaya – [15/06/19]
“Pattaya City Hall has is putting aside 70 million baht for preliminary planning, design work and Environmental Impact Statements for a proposed tram (light rail) project. The trams are part of the Thai government’s huge Eastern Economic Corridor (EEC) budgets to develop Pattaya and other areas along the Eastern Seaboard.”

City government discusses monorail system to further develop Pattaya as a world class tourist destination – [12/06/19]
“…the current plan is to have a state of the art transportation system in place to meet the high-speed train planned for the upcoming Bangkok Airports to Pattaya route.”

A Thai city of sleaze tries to clean up – [16/09/10]
“The government is encouraging the rebranding of Pattaya by developing a master plan for the city, including a monorail to help relieve traffic-clogged streets, a redrawn waterfront and a high-speed rail line from Bangkok.”

Our new Mayor is presenting his dreams – [Nov 2008]
“During his election campaign Itthiphol Khunpluem, now the elected new Mayor of Pattaya, promised his supporters to solve Pattaya’s chaotic traffics with a tramline transportation system.”