The Bali Railway is a proposed light rail transit system connecting Ngurah Rai International Airport to Kuta and the southern beaches. There has never been a railway on Bali, so this would be the first if it is built.

Bali has a population of over 4 million people, and most of the population is around Denpasar and the southern beaches. The majority of visitors to Bali are staying in this area, so a railway from the airport has been proposed as a way to ease traffic congestion on the island.

A plan for a Bali railway was announced in 2011 when the Ministry of Transportation presented a proposed map of a Bali railway system totalling 560 kilometres. The original plan had a circular railway around the island, as well as railways into the interior.

The railway plan resurfaced with the proposed North Bali Airport, which would be built on a mad-made island in the sea at Kubutambahan (about 18km east of Singaraja). It’s a slow journey to get from the north coast to the southern beaches, so a railway was included in the plan as a way to entice flyers to use the new northern airport.

The proposed LRT would be built underground as as the area is already heavily urbanised.

There have been few details made public about any of these plans, so this page will have more details added as they become available. It’s also more probable that a railway transport system will never be built, so this page will serve as a historical archive of a never-built railway.

News: skyscrapercity.com – News and discussion on proposed railways in Bali.

This map shows places mentioned as stops on two proposed lines. There is no route or stations, so this map is just to give a general overview of where the lines might go.

Minister Of PPN and Governor of Bali discuss LRT development acceleration – [01/11/22]
“We agree with this LRT model with underground lines or tunnels for routes where there really are no more options, such as BRT or trams.”

Bali’s first electric train to serve airport-Seminyak line: official – [06/09/22]
“There is another route that is still being studied, which travels from the airport to Denpasar city, Renon, Sanur, and Benoa, via Central Parkir (parking area), and then back to the airport.”

Bali expects to begin electric train construction by 2023 – [27/10/21]
“Despite needing massive investments, Samsi admitted that several potential investors were interested in supporting this project. “We have several potential investors but we haven’t determined the best type of railway and technology for this train, as the amount of investments needed depends on what technology we will use. The technology could be underground, directly on the ground like regular railways, or perhaps above the road. But so far, the regular railway system appears to be our cheapest option.” Samsi concluded.”

The project of battery based electric tram in Bali will start in 2022 – [16/02/21]
“The development of an electric vehicle-based transportation system is planned to cover the areas of Kuta, Sanur, Ubud, and the Bali Gunaksa Cultural Center Area.”

New Bali railway system to fuel economy and tourism – [02/12/20]
“The Central Government has confirmed plans to build a railway line from Badung to Buleleng to optimize economic growth.”

China trains in Bali, check out the routes – [02/10/20]
“…the train is capable of operating without a rail or called Autonomous Rail Rapid Transit (ART) and it will connect Ngurah Rai International Airport to the Sanur area.”

Rail system for the island of Bali – [17/08/20]
“The Director-General of Rail Transport at the Ministry of Transportation, Zulfikri, speaking at a webinar on Tuesday, 11 August 2020, on the planned rail system for Bali, said: “The rail system is still in our planning. We are in the phase of creating a design and a plan. The system would connect Bali’s south with its north.””

Stuck in Bali traffic? Airport to get LRT access to reduce congestion – [22/01/20]
“The LRT will span 4.78 kilometers with four stations between a would-be satellite terminal in Kuta, Bali’s tourist epicenter, and the airport, Nindya Karya acting president director Haedar A. Karim, said.”

Choo-Choo!: Train travel for tourists on track as Bali gov’t seeks to develop island’s infrastructure – [27/05/19]
“Wayan said the first step to improving transportation on the island would entail developing a railway network from the airport to several tourist areas.”

Bali governor moving ahead with plans for rail system as part of overall island access plan – [May 2019]
“While plans are to build a system that encircles the entire island, Koster says the first priority is to build a link between Bali’s Ngurah Rai International Airport – Mengwitani – Singaraja that will start to be built in 2020”

Indonesia’s national rail network aims for more growth, less inequality – [04/09/17]
“The network will also include a separate circle line around Bali to offer better access to untapped parts of the resort island where new tourism developments can be built.”

Indonesia offers Bali railway project to China – [15/06/17]
“Luhut said the railway would connect Denpasar to Ubud in Gianyar regency and Singaraja in Buleleng regency. It is expected that tourists will use the railway to travel from densely populated Denpasar to the two regencies.”

North Bali’s new international airport almost ready to go – [14/04/17]
“The airport will also be equipped with an aero city and a marina, as well as passenger trains to transport them in and out of the airport.”

Ocean airport plan making waves in Bali – [26/05/15]
“The location is approximately 70km north of the existing Ngurah Rai International Airport at Denpasar, and the new airport is likely to be connected to the island’s southern resort areas by road and rail links.”

China Railway interested in building monorail in Bali – [22/03/13]
“China Railway Corporation, the national railway operator in China, has conveyed its excitement to invest in the construction of a monorail connecting all regencies in Bali, officials have said.”

Bali railway on track for 2014 – [11/04/11]
“A proposed railway line circuiting the Bali coast and intended to help relieve the island’s chronic traffic congestion may be operational by 2014, a government minister has claimed. Culture and Tourism Minister Jero Wacik said he hoped around half of the planned 560-kilometre line would be completed by the end of the current government’s term in 2014.”

National Railroad Master Plan – [March 2011]
Report from the Ministry of Transportation showing a proposed map of a Bali railway system. 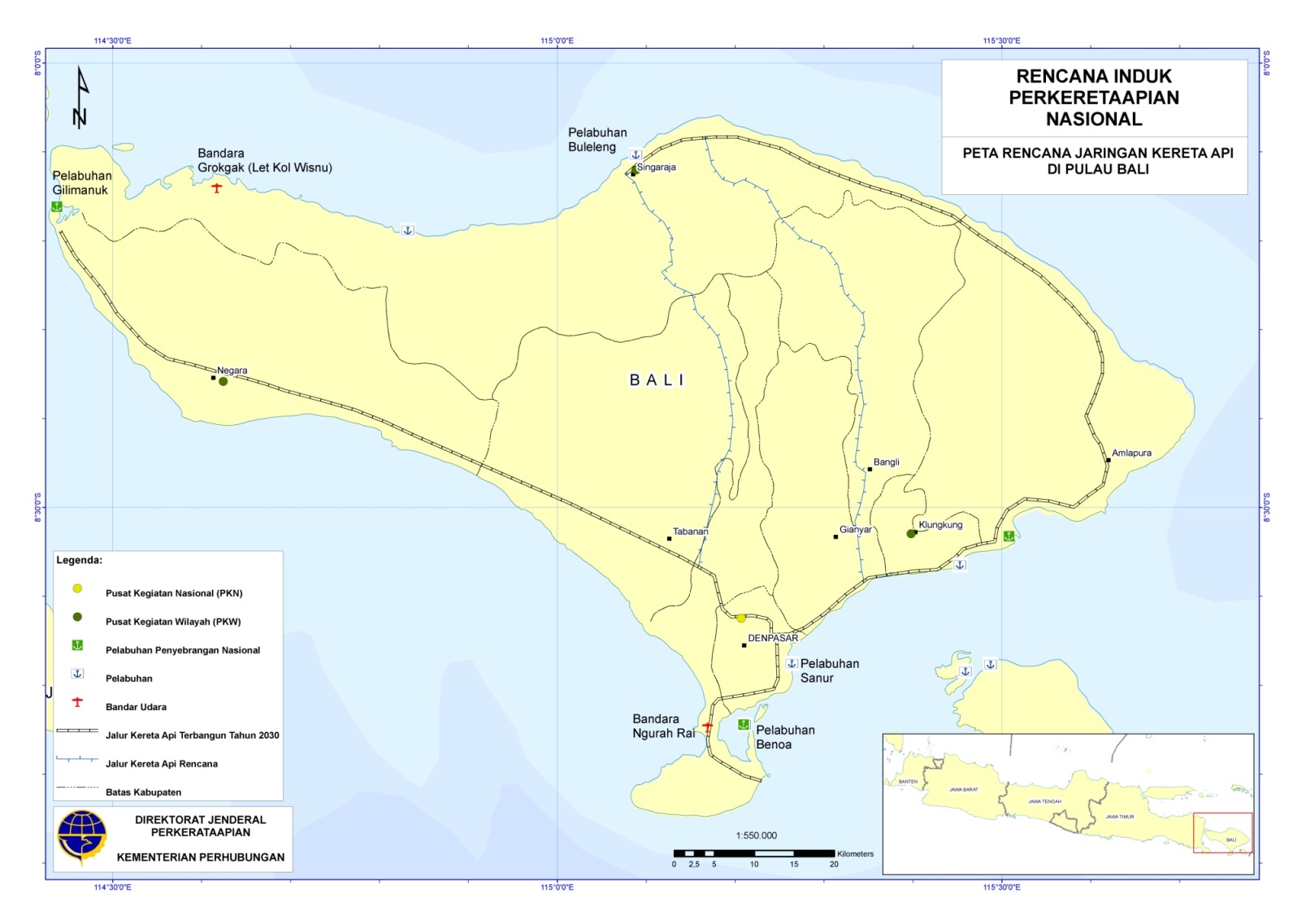