Sihanoukville has emerged from a construction frenzy that was unprecedented for a city this size in Southeast Asia. Cambodia opened the flood gates for Chinese investors to build casinos and hotels in Sihanoukville, with very little government oversight.

In the latter half of the 2010s, Sihanoukville had the feeling of a Wild West boomtown (it is even called Westport in Chinese). New casino operators set up shop (perhaps with dreams of becoming the next Stanley Ho), and the associated crime and violence followed.

Looking back with a few years of hindsight, Sihanoukville’s fortunes began to change on 22 June 2019 after the construction site collapse that killed 28 workers and injured 26 others. The building was found to be unlicensed, and more illegal construction sites were uncovered since the accident.

In August 2019 Prime Minister Hun Sen announced that online gambling would be banned and no new licences would be issued. Many of the casinos in Sihanoukville were bases for online gaming. The ban become official on 1 January 2020, and by the end of the month, the government reported that 200,000 Chinese nationals had left Cambodia following online gambling ban. Then Covid-19 happened.

The rise and fall of the Sihanoukville construction boom can be visualised by looking at the annual passenger movements at Sihanoukville Airport. 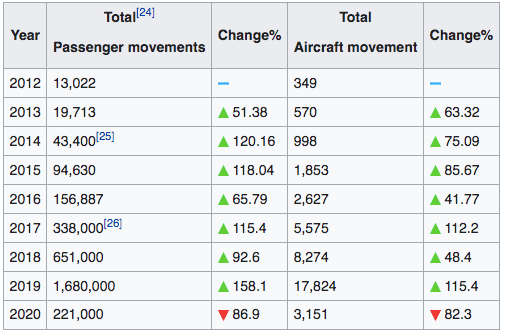 A look at the archived Wiki page of Sihanoukville Airport from 2019 shows how reliant Sihanoukville became on Chinese tourism. Here is the list of every city in China with a flight to Sihanoukville:

That’s 29 mainland cities, plus Hong Kong and Macau. With such a busy international airport you would think that there would be other flights from all over Asia. There were only three other international cities: Bangkok (Don Mueang and Suvarnabhumi), Ho Chi Minh City, and Kuala Lumpur.

Flights from 29 mainland China cities is a staggering amount of flights, even by capital city standards. Bangkok Suvarnabhumi Airport had 51 mainland city flights in 2019, and Singapore Changi had 34 mainland city flights. The only other city to have more in 2019 was Nha Trang, with flights from 30 mainland Chinese cities (I discovered this while compiling the 2019 Vietnam aviation report). This doesn’t show frequencies (for example some cities might be irregular charter flights), so who had the most flights might vary. It is possible though that Sihanoukville would have overtaken Nha Trang with Chinese flights if Covid-19 didn’t happen.

I spent four days in Sihanoukville in January 2022. I walked all over the place, taking notes of empty blocks that might house future developments, and trying to work out names of abandoned projects.

My first task was to catalogue and map all known projects, which are listed on the Future Sihanoukville page.

This map is via the Future Sihanoukville page, and it lists all known projects in Sihanoukville. The map can be used to find projects mentioned in this report.

When I visited Sihanoukville in 2018 there were apparently 55 casinos in the city. By 2019 that number went up to over 100. I was going to make a map to try and count them, but another website has already made a Sihanoukville casino map. This map shows 135 casinos.

Most of these casinos are small operations, so it is not Vegas or Macau where most casinos are huge.

There are too many dead casinos to chronicle, so here is a sample of closed casinos that I saw.

[A dead casino being gutted out.]

[The God Of Wealth Casino – Where is your God now?]

Normally with these construction updates, it is easy to identify the major projects happening around the city. Here, not so much. There are dozens of abandoned buildings in high profile locations that have no indication of what the project is. Construction sites usually at a minimum have the project name in English and a website on the front signage. The construction forums that I read are also having a hard time identifying project names, and even Google hasn’t been able to label project names.

This section is a photo gallery of unidentified unfinished projects around Sihanoukville. 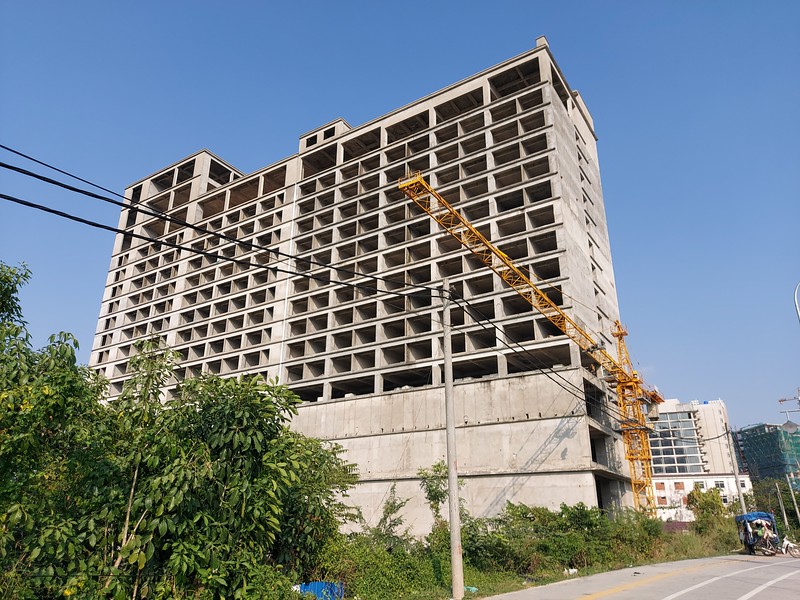 [On road between Lions Roundabout and Sokha Beach]

There is a cluster of unfinished apartments on the hill behind Independence Beach.

Construction has gone ahead before any roads were built, so there are still these one-lane dirt tracks in this new residential area.

I plan my research trips to be in the dry season, as I would not want to be trudging around here in the rainy season. 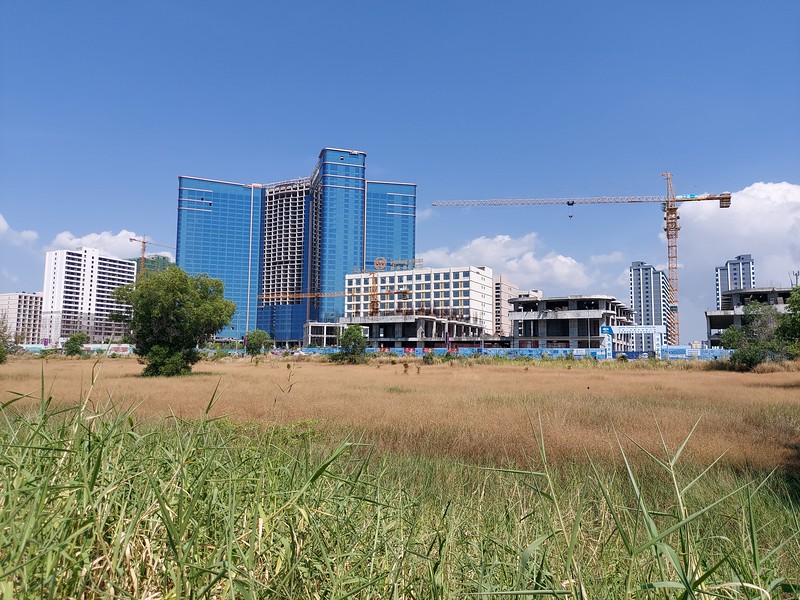 Development has made its way up the coast to Otres Beach, where there are a few different projects that form a new urban area. Otres Beach was a popular backpacker area, but the beach huts have been cleared and a new road has been paved along the entire Otres coastline.

The section closest to Otres Beach is well underway, though the signature building of the Golden Sun Sky Casino & Hotel has stalled.

Behind the Golden Sun Sky Casino & Hotel is land reserved for the KB Central development.

These signs fade quickly under the scorching Cambodian sun, so there were not many details left.

I take photos of whatever I can, and try and find matching images online. 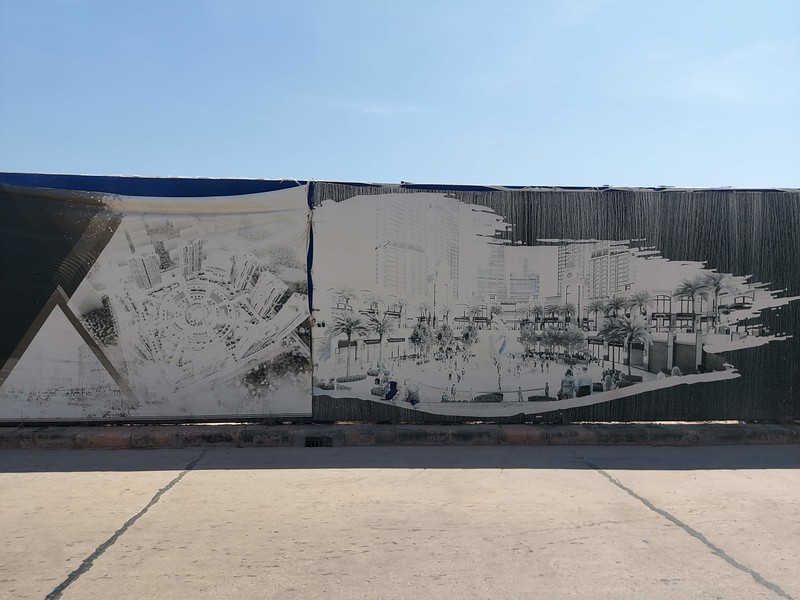 Here is what this block of land will eventually look like.

Next to the land reserved for KB Central is the KB Hotel & Casino, which opened in 2019. This is part owned by a Chinese national who was sentenced to 10 years in a Chinese prison in 2013 for masterminding an illicit international gambling ring.

Next to the Golden Sun Sky Casino & Hotel project is a row of completed buildings that is referred to as The China Project.

The China Project is an oddly generic name considering that the majority of projects in Sihanoukville are Chinese. This area is also referred to as China Town (including on Google Maps), though perhaps it should be pronounced as The China Project.

[China Town buildings (on the right).]

The buildings appear to be occupied as there is washing hanging from the balconies. I went to have a look but I couldn’t get in. The entrances have been sealed off and there are guards at each gate. I didn’t know anything about this place but it immediately felt suspicious that rows of low-cost housing units would be a gated community. 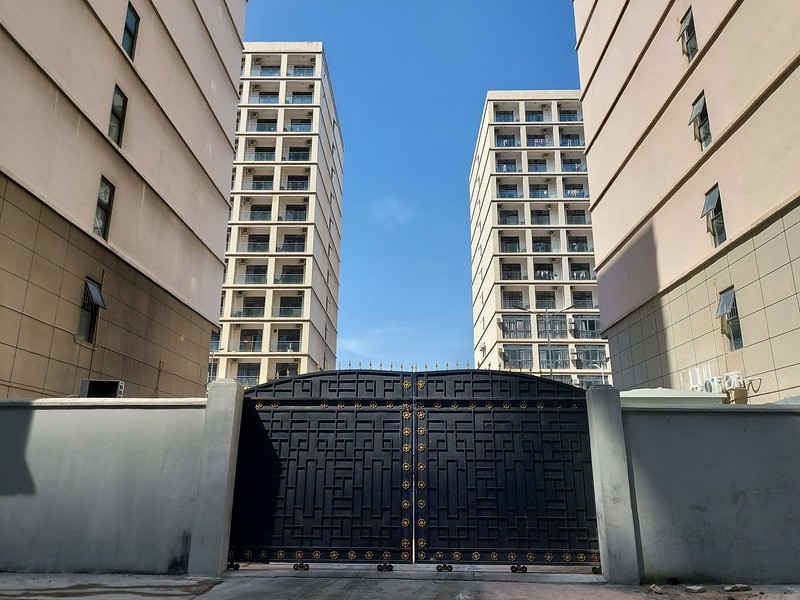 I found a Chinese pulled noodle shop here, so I stopped for lunch. The restaurant had also been walled off so that people from the public road couldn’t walk through to the sealed area.

At the back of the row of apartments, a new wall has been installed to seal off the apartments completely. At this point, a security guard emerged from the shadows to tell me that I am not allowed to take photos. 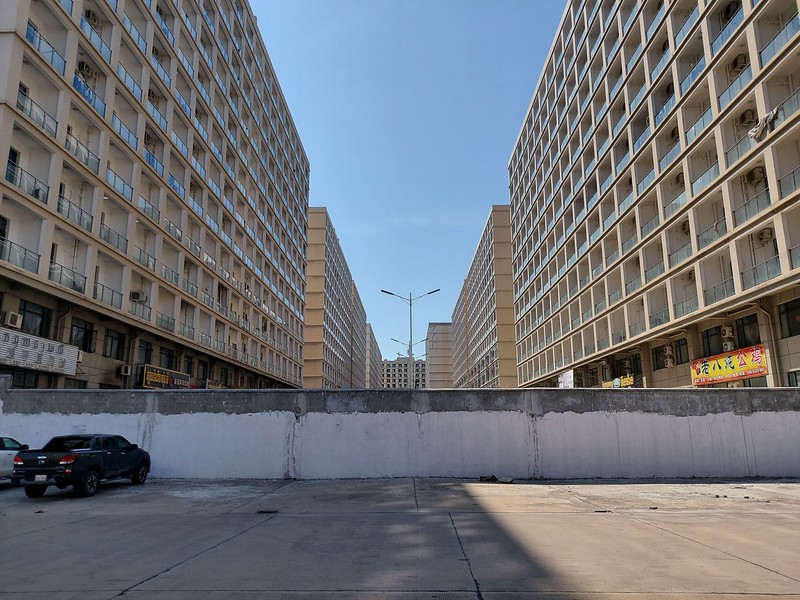 According to this report, foreign nationals have been held here to carry out various illegal activities. Since that report broke, fourteen Chinese were arrested in connection with illegal activities and 41 foreigners were freed, but the building is still allowed to be sealed off as if it was its own sovereign state.

This section includes some of the high profile projects that are currently under construction in Sihanoukville. 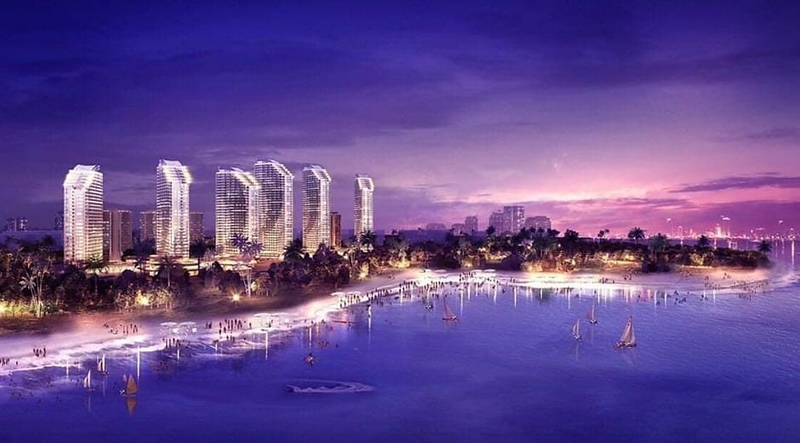 Opposite the Prince Golden Bay Complex is the Star Bay project. 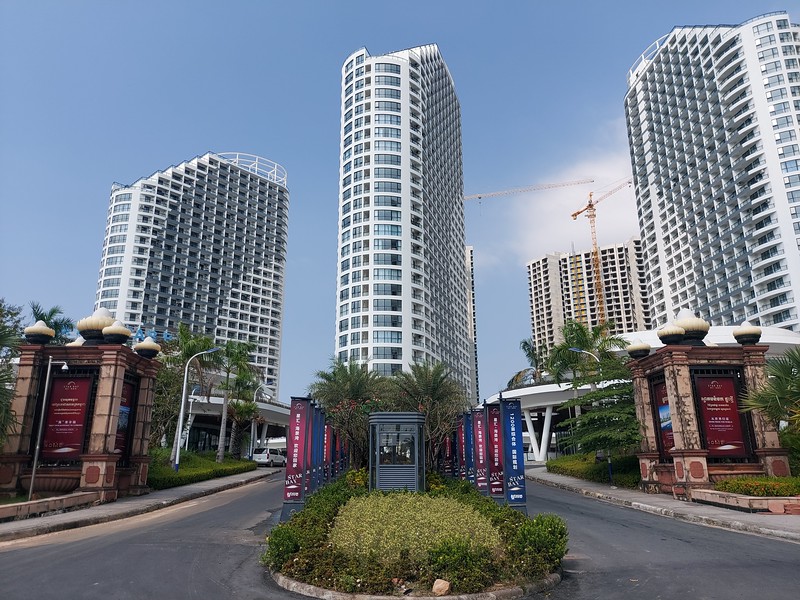 159-metre/43-floor apartment tower at Victory Beach. The building has topped out at 159 metres, making it the tallest building in Sihanoukville (as of January 2022). 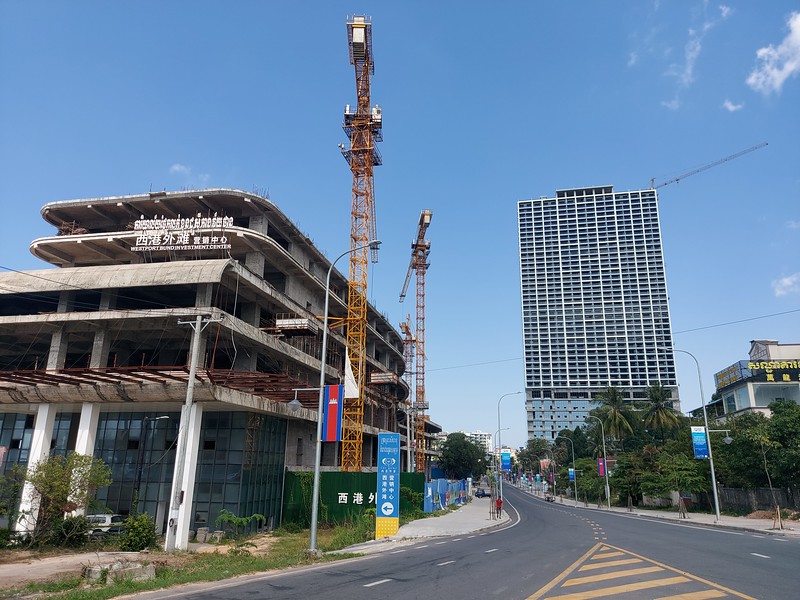 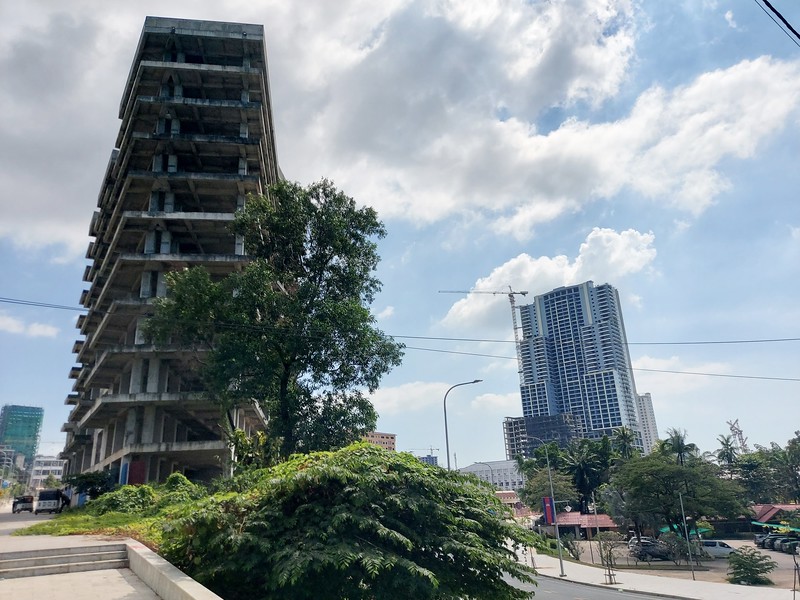 There were some workers on site here, and apart from a faded sign there was no other information about this. 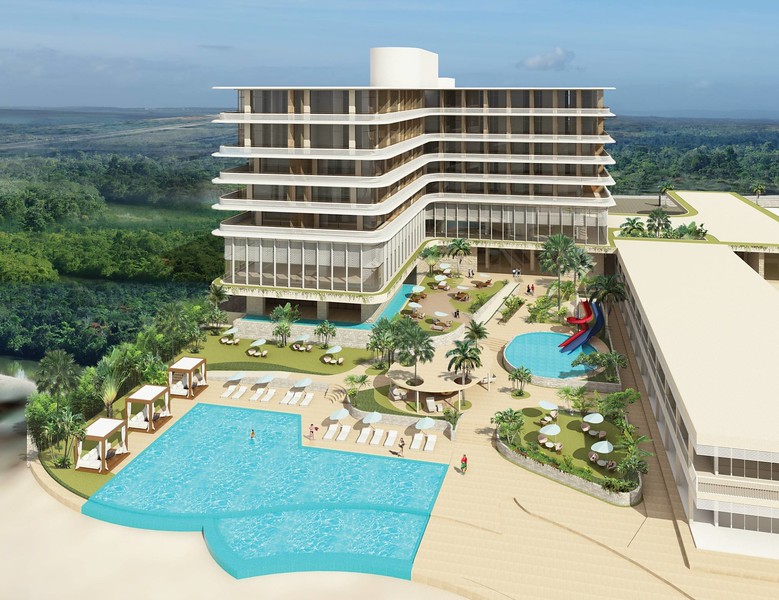 The Novotel Holiday Palace was meant to open in 2020, but it is still under construction. In 2019 the project was called out for building too close to the beach. 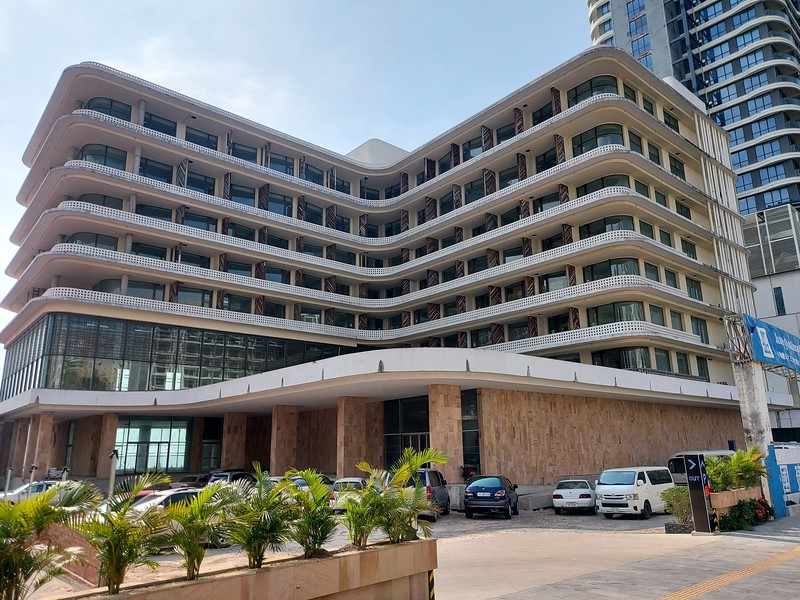 These are the major projects that I could identify that have stalled. 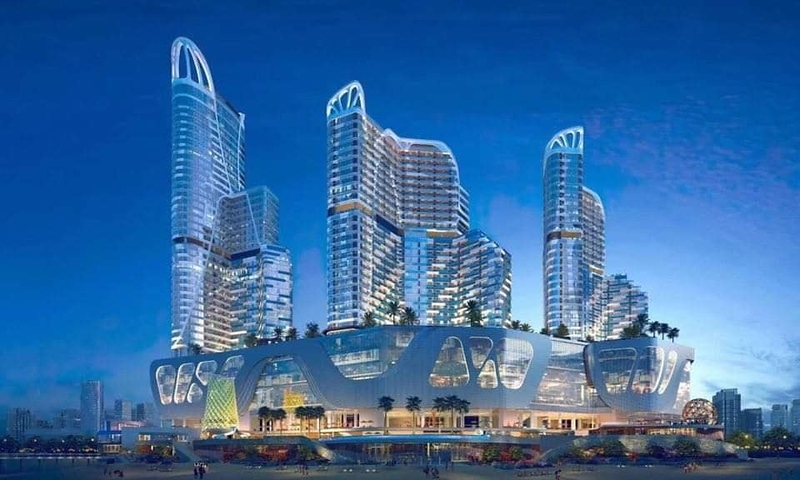 Prince Tian Xi Wan is a shopping mall and apartment complex at Victory Beach. As in right on the beach.

Work has not progressed past the half-finished podium.

In all of my travels, I don’t recall any place ever daring to place a shopping complex with apartment towers this close to the waterline.

A model of the project can be seen at the Prince Tian Xi Wan showroom in Phnom Penh. 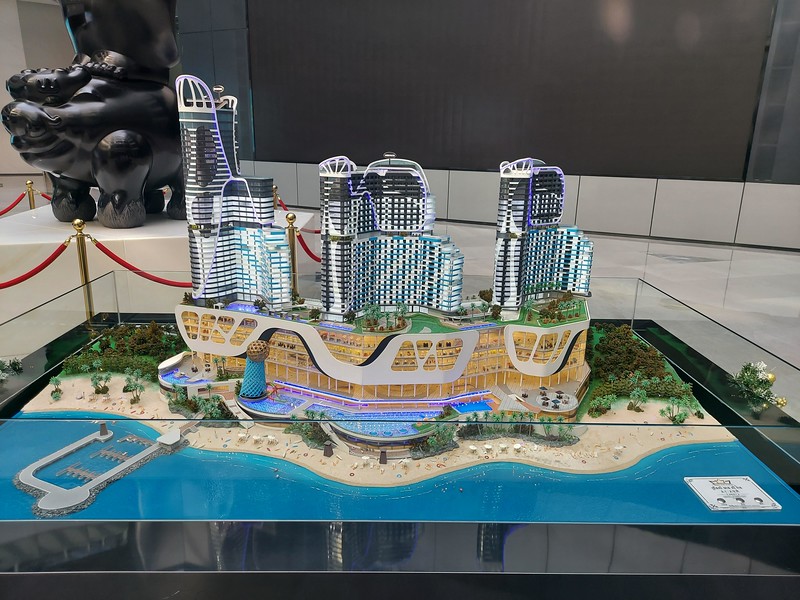 Next to Prince Tian Xi Wan is The Bund project. I couldn’t find any pictures online for it, so I have used a faded image from the abandoned construction site.

There are a bunch of dead projects between the Lions Roundabout and Serendipity Beach, and Oriental Pearl Hotel is one of the few that has any advertising left that says what it is. These projects are using such generic casino names that it is hard to find any more information about them.

The bright spot among all this has been the number of road improvements. 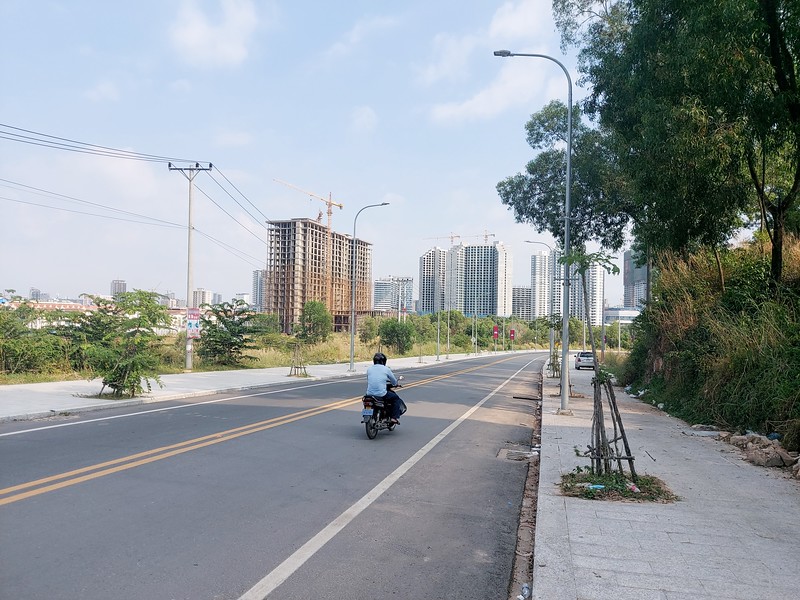 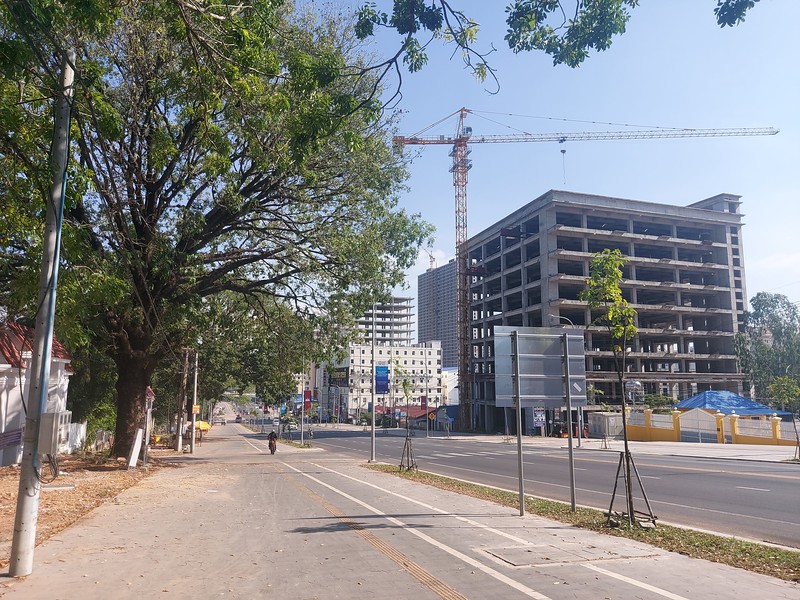 And with the smooth new roads, there is also the so-called unsexy infrastructure – the cabling and drainage that goes underneath. 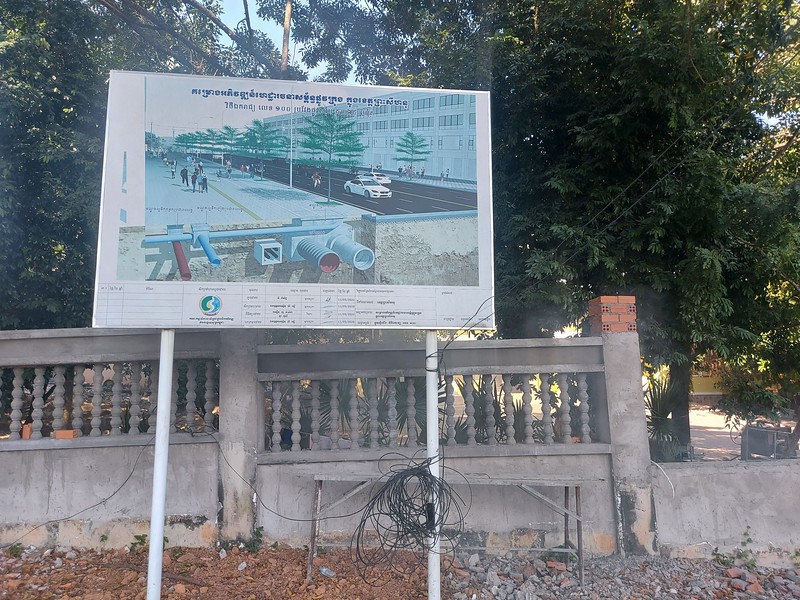