The Phuket Light Rail was a proposed light rail transit system for the island of Phuket in Thailand.

The plan was for the railway to start at the airport in the north of the island, travel south to Phuket Town and end at Chalong. The total length would be about 40km. In the future the line could be extended north from the airport to neighbouring Phang Nga Province.

A plan for a light rail or monorail on Phuket was first proposed in the mid-2000’s, and the project was approved in 2015. Since then there have been annual announcements of its impending commencement, with more changes and cost increases every year.

The project has been controversial for its cost and route choice, which doesn’t serve any of the popular beaches on the west coast. It also runs at grade on highways and streets, potentially causing more traffic problems. The route has since been modified to include more tunnels and elevated sections to avoid traffic.

Phase 2 would continue from the airport to Phang-Nga province. In the future this could possibly connect to a Phang Nga-Surat Thani railway.

In May 2021 the government announced that it would scrap the rail plan for an automated rapid transit (ART) bus system instead.

MRTA to go ahead with Phuket ART project to fix traffic congestion – [09/11/21]
“The Mass Rapid Transit Authority of Thailand (MRTA) will hold a public hearing session for the construction of Autonomous Rail Rapid Transit (ART) system in Phuket province on Nov 12 at Royal Phuket City Hotel in Muang district.”

Trams out, buses in for thrifty Phuket – [15/05/21]
“Phuket has swapped its planned tram system for an automated rapid transit (ART) bus system and saved 15 billion baht in the process.”

Phuket Rail goes through its first public hearing, with a few modifications – [26/08/20]
“Phuket’s light rail/tram, and much-discussed, public transport system has had a round of public consultations to take the project to the next level. At one stage the route started in Phang Nga province but now it’s had a ‘haircut’ and will only run from the Phuket International Airport to Chalong Circle, a distance of some 42 kilometres.”

Phuket light rail running another two years late – [25/08/20]
“Construction of the Phuket light-rail project is now expected to begin in 2023 and open to serve passengers in 2026”. 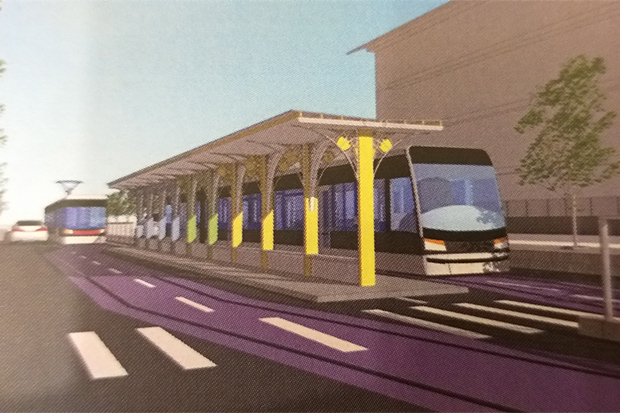 Phuket Light Rail project hits a few speed bumps – [12/12/19]
“The Phuket Light Rail (Phuket Tram) project has hit a few hurdles and has been shelved, apparently temporarily, whilst some further studies are conducted into the ambitious public transport project. The proposed tram route was proposed to start at Phuket Airport and finish at the Chalong Intersection, with a total of 21 stations along the way.”

Phuket light-rail bids set for mid-2020 – [02/12/19]
“Bidding for construction of the light-rail system in Phuket is likely to take place in the middle of next year, according to the Mass Rapid Transit Authority of Thailand (MRTA).”

Final design for Phuket Light Rail wrapped up next week – [07/06/19]
“A final design of light rail (tram) project in Phuket should be concluded by next week as a dispute over how the rail structure will be laid is close to being settled.”

The 35 billion baht white elephant – Phuket’s light rail – [22/01/19]
“Spending 35 billion baht on infrastructure that few will use, is planned on the least useful route and will cause mayhem for a 3-5 year build time is a waste of money.”

Phuket light-rail budget jumps B594mn, to B40bn – [27/11/18]
“The estimated budget required for building the Phuket Light Rail system has jumped by more than B500 million, according to announcement issued by the Office of Transport and Traffic Policy and Planning (OTP).”

Traffic safety raises concerns in Phuket light-rail plans – [19/09/18]
“With just 12 days to go until the end of his tenure as Governor of Phuket, Norraphat Plodthong yesterday (Sept 18) said that construction of the Phuket light-rail project was expected to commence in 2020.”

Six tunnels touted in revamped Phuket light-rail plans – [08/02/17]
“The revised plans for the decades-in-coming Phuket light-rail project shown to local residents this week now include six tunnels for the rail cars to pass through in order to avoid causing more traffic woes on the island.”

Phuket Governor’s China visit shines light on light-rail options – [28/12/16]
“A four-day fact-finding mission to China to inspect light-rail cars by Phuket Governor Chockchai Dejamornthan and an entourage of officials and media has provided a glimpse into what Phuket’s long awaited light-rail system might look like.”

B2bn light rail system in the works for Phuket – [18/01/16]
“A light rail system worth more than 2 billion baht will be constructed between Phuket International Airport and Chalong intersection to boost the country’s tourism in the South.”

Phuket gets nod for B23.5bn light rail – [20/11/15]
“The Ministry of Transport has green its approval for Phuket to build the long-awaited light-rail system from Tha Noon in Phang Nga all the way south to Chalong Circle at a cost of B23.5 billion.”

Phuket light-rail construction ‘two years away’, says transport head – [18/06/15]
“The Director-General of Office of Transport and Traffic Policy and Planning (OTP), Peraphon Thawornsupacharoen, revealed today (June 18) that construction of Phuket’s light-rail project could start within two years, if everything goes according to plan.”

Details of light rail tram system for Phuket revealed – [04/06/14]
“Work on Phuket’s long-awaited light rail tram project may start within three years, after the official route and type of transport system were officially confirmed at a public hearing yesterday (June 3).”