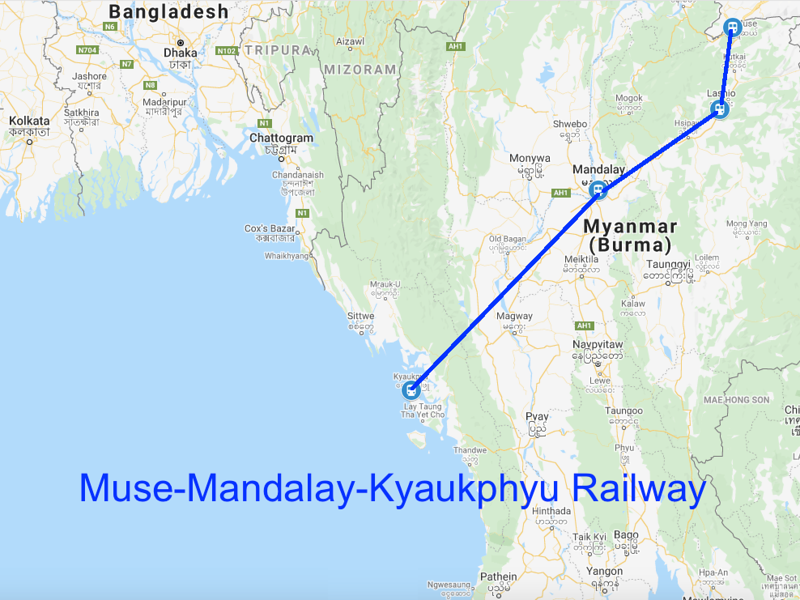 The Muse-Mandalay-Kyaukphyu railway project is two proposed railways that make up the Myanmar section of the China-Myanmar railway. The two sections in Myanmar are Muse to Mandalay, and Mandalay and Kyaukphyu. News and information about any of these projects will be put on this single page.

The railway could also be called the Kunming to Kyaukphyu railway because the ultimate goal is to connect the Chinese railway network to a port in the Bay of Bengal. The railway would enable cargo from China to avoid going around the Strait of Malacca.

Myanmar and China agreed to the project in 2011, but no progress was made beyond the agreement. The project was resurrected in 2018, and most recently it was reported that a feasibility study for the Mandalay to Kyaukpyu railway would be ready in 2022. 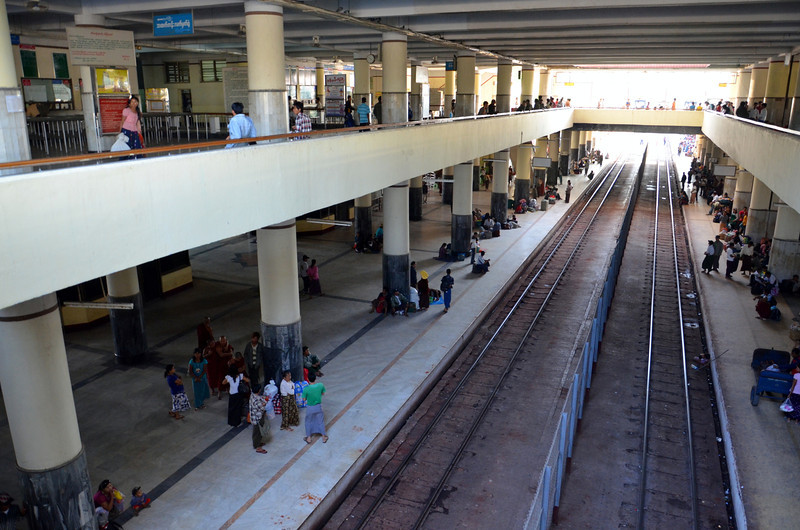 The Muse-Mandalay section is 431-km and will be a standard gauge railway, with trains operating at speeds of up to 160 km per hour. There is currently a railway from Mandalay to Lashio (which is about two thirds to Muse), but it will be a completely new line. The current railway is famous for the Gokteik Viaduct between Pyin U Lwin and Hsipaw. 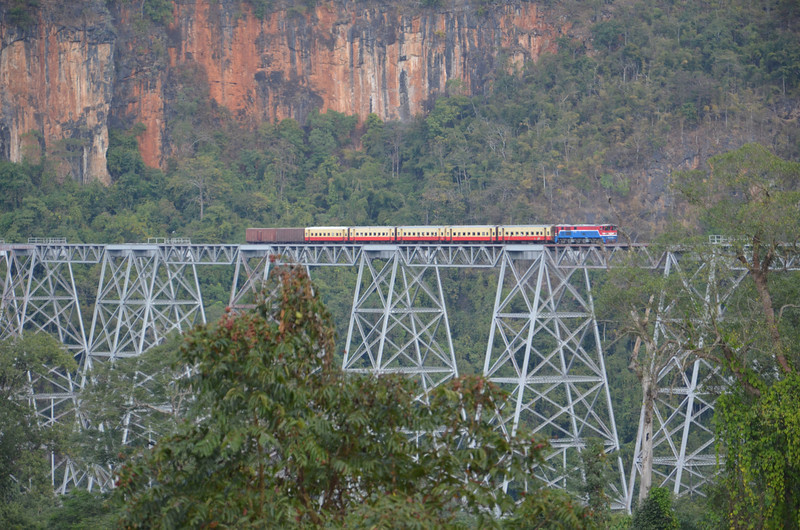 Feasibility study on BRI railway link in Myanmar to take 18 months – [14/01/21]
“Myanmar and China have agreed to complete a feasibility study within one and a half years on the Mandalay-Kyaukphyu Railway, a major part of China’s planned strategic railway linking China’s rail network in Yunnan province’s Kunming with Myanmar’s Kyaukphyu port in western Rakhine State, Myanma Railways said.” 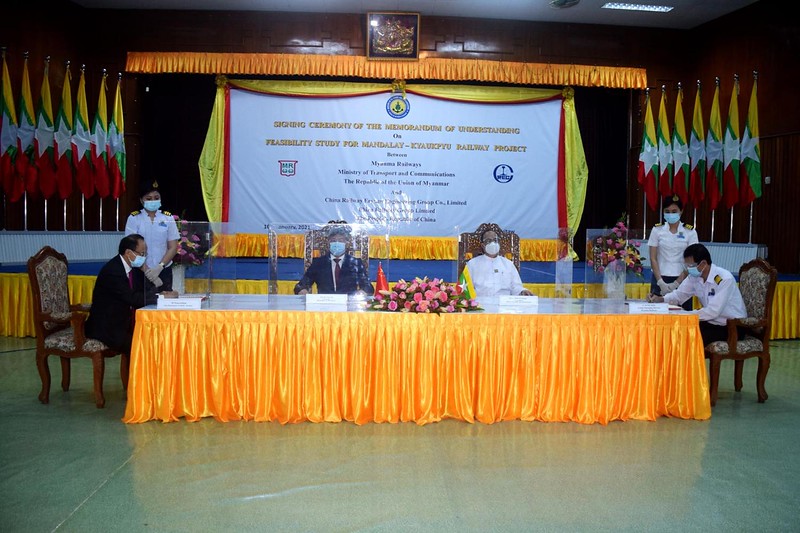 Chinese to conduct feasibility study on Mandalay-Kyaukphyu railway – [22/06/20]
“The railway is part of a larger railway project connecting Muse to Mandalay. A memorandum of understanding for the railway was signed between the Myanmar government and China Railway Eryuan Engineering Group Co Ltd (CREEG) on October 22, 2018.”

Myanmar pulls Swiss firm to scrutinize China’s BRI project – [11/06/20]
“The Myanmar government says it is receiving help from a Swiss company to scrutinize a China-backed study on Beijing’s ambitious railway project to connect Mandalay with Kunming, the capital of Yunnan Province in southwestern China.”

Myanmar, China sign dozens of deals on BRI projects, cooperation during Xi’s visit – [18/01/20]
“During the ceremony, China again handed over to Myanmar the Muse-Mandalay Railway Feasibility Study Report, which is an initial phase of the strategic railway link that Beijing plans to build—with a parallel expressway—from Kunming to Kyaukphyu, in addition to a separate road running through northern Myanmar, India’s northeastern states and Bangladesh under the Bangladesh-China-India-Myanmar Economic Corridor (BCIM-EC).”

Potential environmental and social impacts of Chinese mega-projects in Myanmar raise concerns – [19/11/19]
“Environmental impact and social impact assessments for two key projects of the CMEC—the Kyaukphyu SEZ in Rakhine and the Muse-Mandalay railway project in northern Shan State and Mandalay Region— are now under way.”

Full steam ahead for China-Myanmar high-speed railway – [21/02/19]
“A long stalled rail project to connect the two nations has been given new impetus under Aung San Suu Kyi’s isolated government.”

Survey starts for major railway project – [01/02/19]
“The project calls for the building of a high-speed railway line from Kunming, China, to Muse on the Myanmar-China border and from there to Mandalay and terminating in Kyaukphyu in Rakhine.”

How likely is the successful completion of the China-Myanmar Economic Corridor? – [29/10/18]

Myanmar, China agree cross-border rail project – [28/04/11]
“Myanmar and China have agreed to build a rail link connecting Southwest China with the Indian Ocean, officials and local media said on Thursday. The railroad will be built in five stages over the next three years and will stretch for total of 1,215 kilometres (755 miles), from the Kyaukphyu deep-sea port in Myanmar’s Western Rakhine State to China’s Yunnan province”.