The Bayan Lepas LRT is the proposed Penang light rail transit system that will connect Georgetown in the north of the island to the airport at Bayan Lepas in the south. The LRT is part of the overall Penang Transport Masterplan that would build new LRT, monorail, Bus Rapid Transit (BRT), and tram systems across the state of Penang.

The LRT was publicly proposed in 2014, and in 2015 it was announced that work would begin in 2018. The railway was initially a 17.5km elevated line from Komtar to the Penang International Airport. Since then the proposed line has been extended south to include the Penang South Islands project, making the line 29.9 km in length with 27 stations.

After the inevitable delays that happen with first city transit lines, work was expected to begin in 2020. Then 2020 happened. A combination of factors has delayed and confused the status of the project, including the effect of the coronavirus on the economy. The LRT has been controversial enough, with doubts about projected passenger numbers being raised. To add to the controversy, the fortunes of the line have been tied to the fate of the even more controversial South Islands development. The sale of land on the artificial islands is expected to pay for the line.

To add to the drama, the Malaysian government collapsed in 2020, and by the end of the year the new government had withdrawn the loan guarantee for the project. The MP for Bukit Mertajam in Penang called this a political vendetta, though the government denies this is the case.

The map below shows the stations and locations, though so far there are few details of what the stations will look like. The northern terminus at Komtar is on the edge of the UNESCO World Heritage Site buffer zone (an elevated railway is not allowed in the historic area). The Komtar area has already begun rejuvenation, such as the nearby Seven Streets Precinct. Property developers have pre-empted the LRT by building near proposed stations. Read more about other property developments on the Future Penang page. 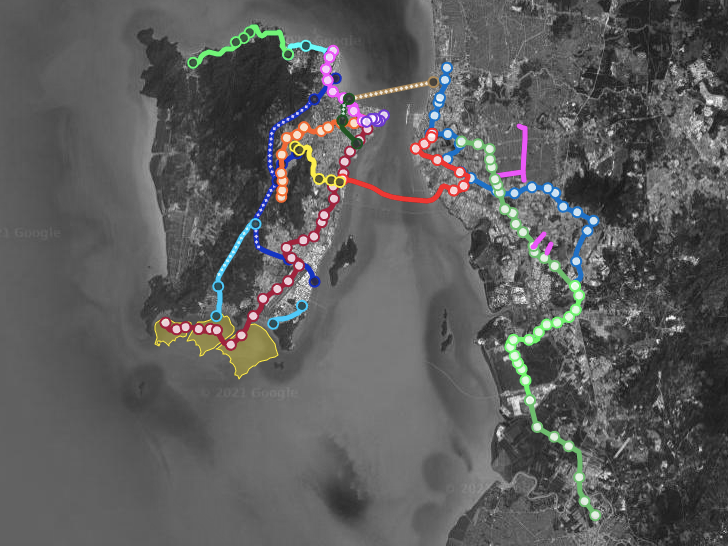 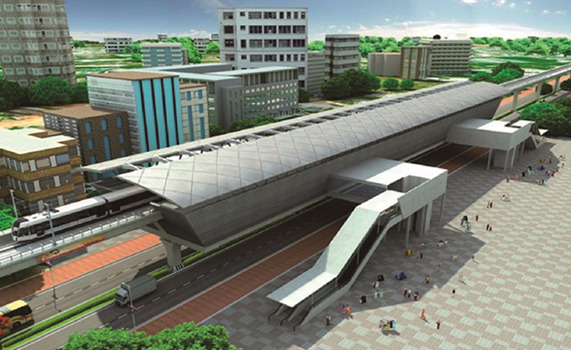 EIA nod key to Penang LRT line’s green light – [13/08/22]
“The federal government’s nod for Penang’s first LRT line hinges on the environment department’s approval for reclamation of an island, according to the transport ministry.”

Penang to open LRT project for proposals in Q3 2022 – [03/06/22]
“The Penang state government will issue a request for proposal (RFP) by the third quarter of this year for implementation of its Bayan Lepas Light Rail Transit (LRT) scheme.”

Transport Ministry denies cancelling Penang govt infrastructure projects – [09/01/21]
“Regarding the Light Rail Transit (LRT) project from Bayan Lepas to Komtar, the ministry said it did not cancel the project as claimed, but the Penang government had yet to hand over the final approved Social Impact Assessment (SIA) and the Environmental Impact Assessment (EIA) from the Department of Environment and the Rural and Urban Planning Department (PLAN Malaysia) to the Land Public Transport Department (APAD).” 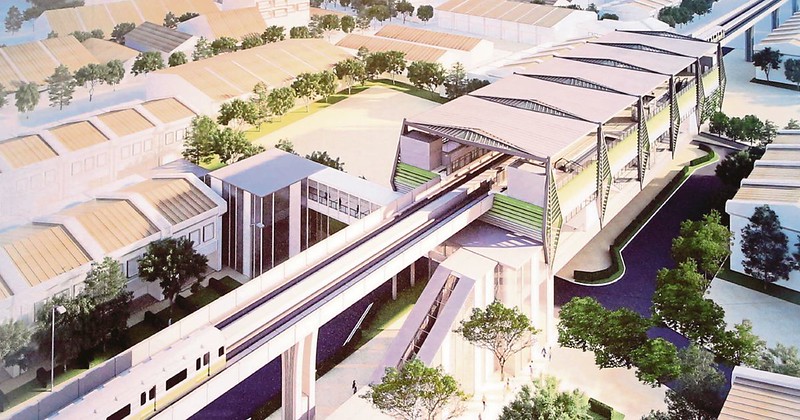 Penang LRT project to go on with other financing options, says Chow – [01/12/20]
“Penang will not give up on its proposed Light Rail Transit (LRT) project despite Putrajaya withdrawing its guarantee, said Chow Kon Yeow.”

Putrajaya withdraws guarantee to finance Penang LRT – [28/11/20]
“The Perikatan Nasional (PN) federal government is not going to provide a guarantee for a RM2.04 billion loan application by the Penang state government for its light rail transit (LRT) project.”

Mega projects in Penang to go ahead – [20/06/20]
“For the Bayan Lepas Light Rail Transit (LRT) project, the model has always been to pay for the infrastructure project via a land reclamation.” 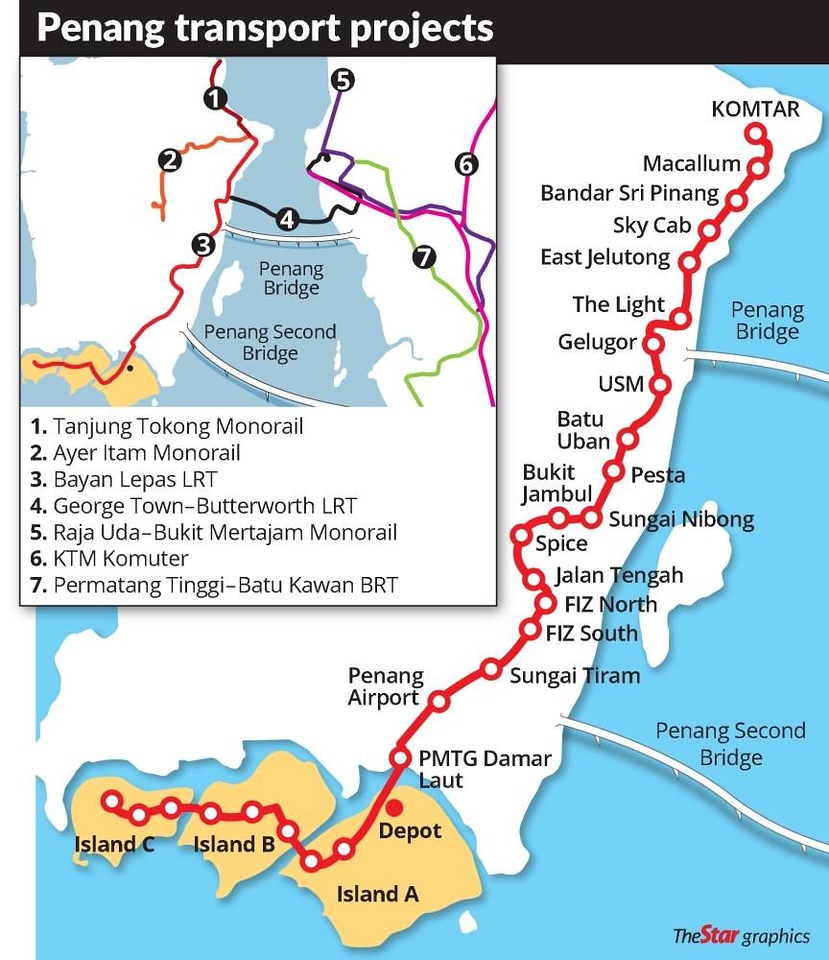 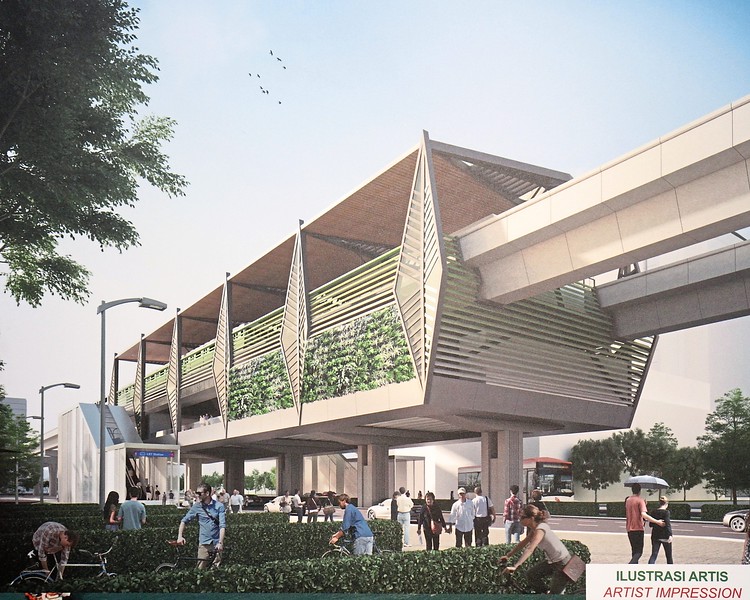 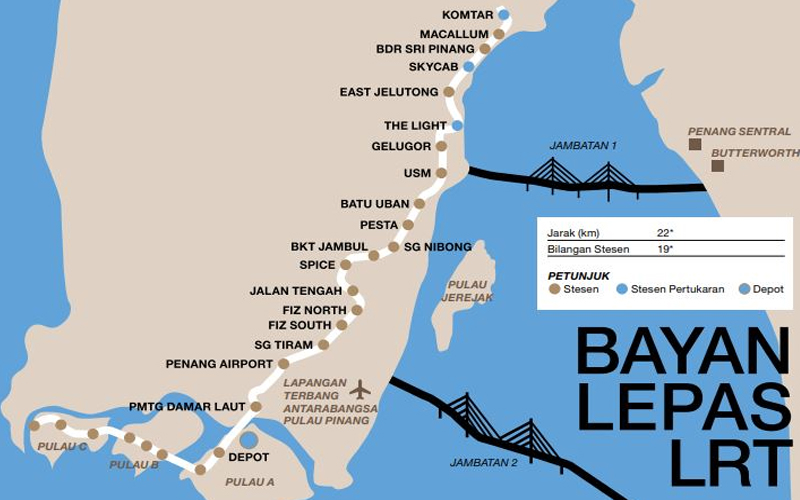 Green light given – [18/07/19]
“Waves of excitement swept through Penang when the Transport Minister announced that the Bayan Lepas light rail transit (LRT) has received conditional approval.” 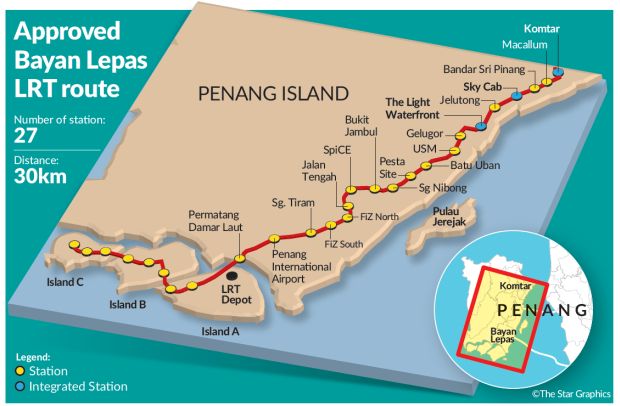 Go-ahead likely for Penang LRT – [11/08/18]
“The approvals from the federal authorities for the RM8.4bil Bayan Lepas light rail transit (LRT) and the massive Penang South Reclamation (PSR) scheme on the southern coast of the island are expected to be obtained before the end of the year.”

Is the Penang Transport Master Plan headed for financial trouble? – [30/07/18]

Preparing Penang for the LRT – [06/08/17]
“To give the Bayan Lepas LRT a higher chance of success, AnakPinang encourages the local authority to implement steps that will help avoid initial low ridership.”

Penang starts display on EIA report for Bayan Lepas LRT project – [21/07/17]
“The public can now view and give their feedback on the Environmental Impact Assessment (EIA) (Second Schedule) for the proposed Bayan Lepas light rail transit (LRT), which is currently on public display.”

According to SRS Consortium Sdn Bhd, the Gamuda Bhd-led project delivery partner (PDP) for the TMP, it will be finalising the cost and alignment of the entire project by year end.”

The LRT connection – [07/09/15]
“The old Prangin market or popularly known as Sia Boey (Town’s End) in Penang will be transformed into a premier art district in the country with a Light Rail Transit (LRT) line cutting through the 2.2ha site for easy access for the public.”

First LRT project in Penang next year – [16/04/15]
“Penang is set to get its maiden LRT project – a 17.5km elevated stretch linking Komtar with the Penang International Airport.”

Alleviating traffic congestion in Penang – [18/07/14]
“Penangites voice their opinions on the recently announced proposal to build a light rail transit system on the island…The two main public transport infrastructure projects of the integrated plan would involve the construction of an LRT system – estimated at RM4.5bil, and a link from Bayan Lepas to Tanjung Bungah.”