The Phnom Penh metro is a proposed urban rail transit system in Phnom Penh, Cambodia. The term metro is used loosely here, as there have been various forms of rail systems proposed over the years. Proposals have included sky trains, subways (another word for metro), light rail, and monorails.

Plans for an urban railway in Phnom Penh date back to the mid-2000s, with feasibility studies having been undertaken by Japan International Cooperation Agency (JICA), and Chinese companies. The most likely routes would be a line from the central market to the airport, and a north-south line that would also cross at the central market. There have been no updates on the findings of the studies.

While these studies were going on, Phnom Penh launched an airport railway service by adding a spur line from the mainline that passes near the airport. This service has since closed.

Another factor that will need to be considered is the new Phnom Penh International Airport, which is currently under construction. It has been mentioned that a railway will serve the airport, but no plan for that has been published yet. The old airport will remain open, so future transport network planners will have to decide whether to run a railway to either one or two airports.

This post is an archive of news and links related to any future Phnom Penh urban railway developments. Subscribe to the weekly newsletter to be updated when new links are added to this page. 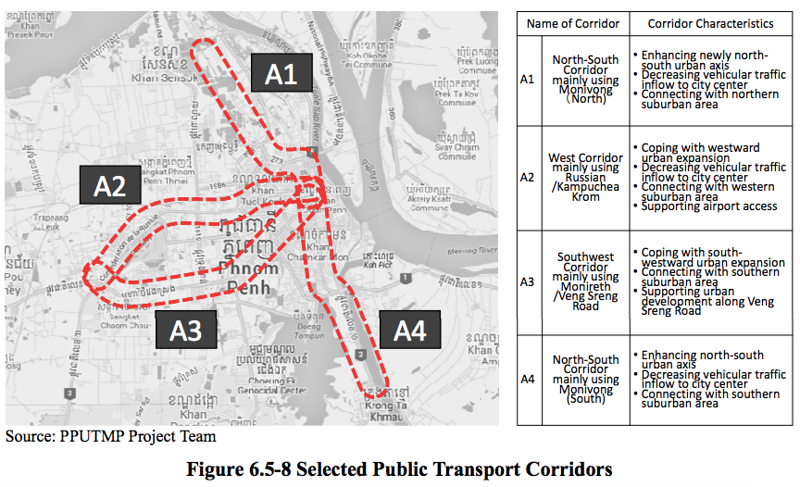 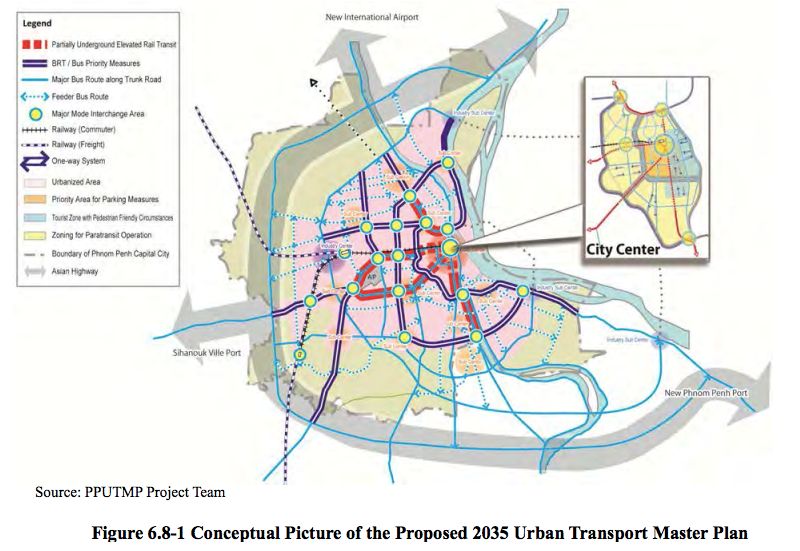 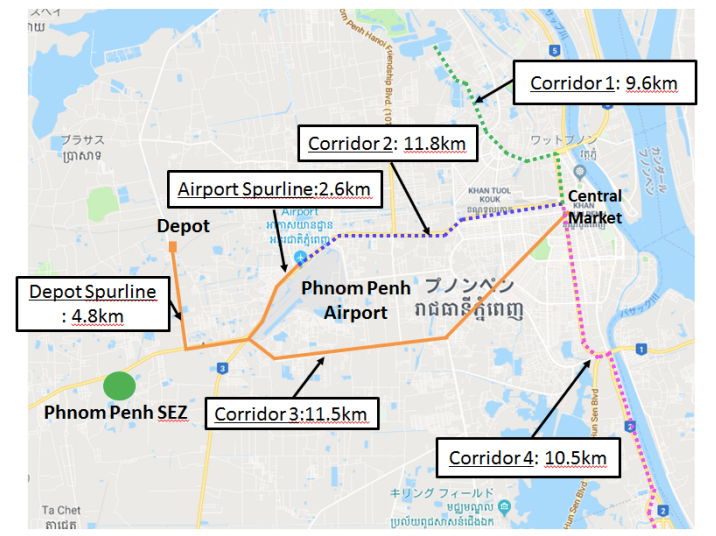 PP mega transport system studies at final stage – [28/12/22]
“The studies on the mega transport system – sky train, monorail, and subway – in Phnom Penh are being finalised, according to the Ministry of Public Works and Transport, saying that the investment will likely be under the public-private partnership.”

Key study on capital’s rail project completed – [25/12/22]
“Preliminary studies on three options for a mass transit railway system for Phnom Penh have been completed, and after “a few adjustments”, a report will be submitted to Prime Minister Hun Sen to decide which choice to move ahead with, according to Minister of Public Works and Transport Sun Chanthol.”

Skytrain project could cost more than $ 1.4 billion, but no date has been set – [09/12/20]
“Senior Minister Sun Chanthol, Minister of Public Works and Transport, recently said that the JICA study project has already been studied. And the ministry is still waiting for the study results. In particular, the Monorail and subway projects of Chinese companies are studying.”

Promised sky train delayed over expense – [23/07/20]
“The government’s sky train project from Phnom Penh city centre to the international airport has been delayed because the cost is higher than expected, according to an official from the Ministry of Public Works and Transport (MPWT).”

Sky Train Plans Back On The Table – [05/09/19]
“The Royal Government of Cambodia plans to spend a total of 1.843 billion US dollars to build a ‘skytrain’ style light rail and subway project from the new downtown (Central Market) to the Zongzhou (*Chom Chao?) area in Phnom Penh. The project is planned to start in 2020.”

“A feasibility study for an automated gateway transit (AGT) system, an electric-powered mass transit system, in Phnom Penh is also being conducted in cooperation with the Japan International Cooperation Agency (JICA).”

Authorities weigh up options over new transit system in Phnom Penh – [10/04/19]
“…the ministry was looking into three options regarding railway projects – an automated guideway transit (AGT) system, a monorail and a metro.”

Minister talks sky train plan as Grab signs initiative with UN – [07/06/18]
“The minister of public works and transport confirmed on Tuesday that a Japanese-funded sky train project in the capital is moving forward, with the feasibility study expected to be completed this year or next.”

Sky train link from Phnom Penh to Morodok Techo stadium planned – [04/02/18]
“Five years ahead of Cambodia hosting the 2023 SEA Games at the state-of-the-art $157 million Morodok Techo National Sports Complex on the outskirts of the capital, the Public Works and Transport Ministry has included a sky train link between Phnom Penh and the Games’ main venue in its expansive plan to build an Automated Transit Gateway System (AGT) in association with Japan International Cooperation Agency (JICA).”

Will China’s Sky Train enter Cambodia? – [23/01/18]
“China’s trains reach new heights! The Sky Train, powered by lithium batteries, can operate 5 meters above ground. A delegation from Cambodia expressed the hope last week that this new mode of transport could be brought to Phenom Penh, the capital of Cambodia.”

Cambodia seeks China-made panda-shaped ‘sky train’ – [16/01/18]
“The Chinese company behind the panda-shaped “sky train” said it hopes to introduce the project into Cambodia.”

Skytrain studies completed – [20/10/17]
“The government has completed preliminary studies on a $900 million skytrain from Phnom Penh city centre to the international airport.”

Prime Minister requests Japan’s funds for Phnom Penh skytrain – [08/08/17]
“Prime Minister Hun Sen is expected to request $800 million from Japan during a visit there this week to fund the construction of an elevated rail system running from Phnom Penh’s center to the capital’s airport, an official said on Monday.”

Skytrain a bold vision for city – [11/05/17]
“Japan International Cooperation Agency (JICA) has confirmed it will kick off work on a feasibility study for a $800 million skytrain that would run through Phnom Penh following recent talks between Japanese and Cambodian ministers.”

Proposed skyline train is the future, transport officials say – [02/02/17]
“Japan’s international aid agency is proposing to bring a driverless skyline train to the city, capable of whisking commuters on a smooth ride to and from work on a track above the streets.”

Long-term plan to ease congestion nearly done – [21/08/14]
“Developed in conjunction with the Japan International Cooperation Agency (JICA), the plan considers the options available to reduce the number of vehicles in the city, including more busses, a tramway, a subway and even a sky train”.

Mixed reactions arise over planned sky train in Phnom Penh – [20/08/07]
“(Xinhua) — A Phnom Penh Municipal official has expressed doubt in the viability of plans announced by the Bangkok Mass Transit System (BTS) to build electric sky train networks over the city’s increasingly car-jammed boulevards, while others have welcomed the proposal, local media reported on Monday.”