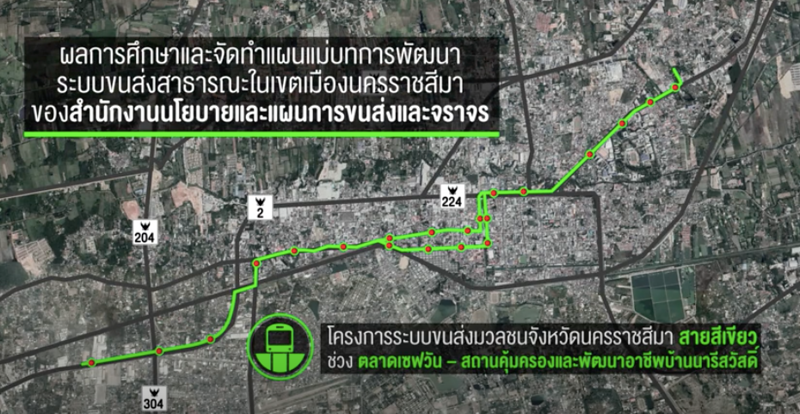 Three lines have been proposed in total (Orange and Purple Line) with a combined length of 50.09 KM. The system has been referred to as a tram, light rail, and LRT (Light Rail Transit).

Korat LRT Mass Transit stations update – WeKorat (Thai language website) has a map of what the 3-line system might look like, and some other images of the project.

MRT urged to rethink Korat trams – [27/08/20]
“The chairman of Nakhon Ratchasima Chamber of Commerce, Chatchawal Wongjorn, said the MRT would be better off using rubber-tyred people-movers rather than conventional trams which run on fixed tracks, as it would significantly cut down on construction costs.”

Mass transit lines lure Bombardier’s interest – [29/01/19]
“The cabinet also approved a royal decree in December to allow the MRTA to implement an electric rail or tram in Nakhon Ratchasima.

Purple Line, Phuket light rail among projects up for PPP – [12/12/18]
Mr Prapas said two provincial mass transit projects, in Chiang Mai and Nakhon Ratchasima, are expected to go before the PPP committee by next year.

New transport systems on the horizon – [08/01/17]
“The Mass Rapid Transit Authority of Thailand (MRTA) last year authorised a multiple feasibility study for rail projects in Chiang Mai, Nakhon Ratchasima, Hat Yai, Phuket and Khon Kaen, where traffic gridlock has worsened. The projects are also designed to serve the needs of industry and tourism.”