Welcome to the annual Bangkok construction update. This is a snapshot of major projects around Bangkok as of December 2022. An ongoing list of projects can be found on the Future Bangkok page.

One Bangkok is a mixed-use development featuring office towers, luxury hotels, luxury condos, and retail spaces. I arrived at the Lumphini MRT exit and was stunned to see how much progress this project has made. 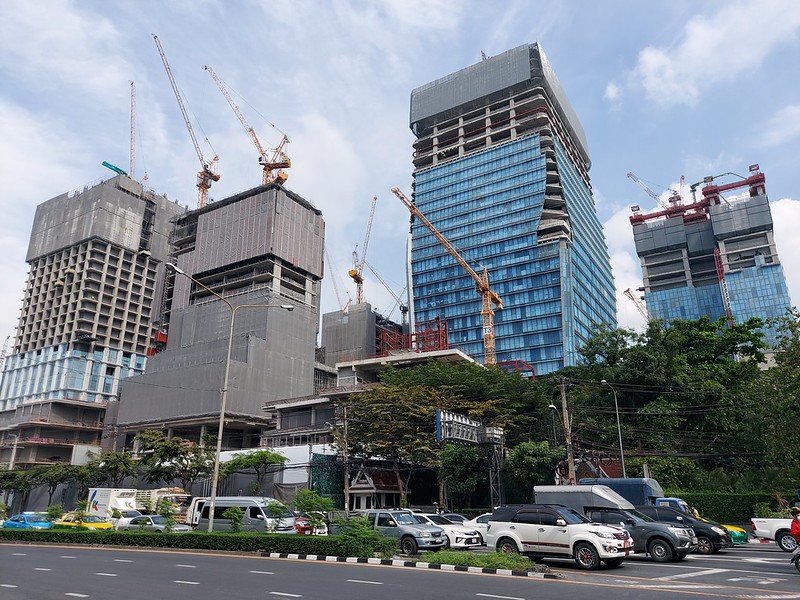 Construction has been fast, but it has come at a cost with the death of 3 workers this year.

See more photos and all reported news updates at the One Bangkok page. 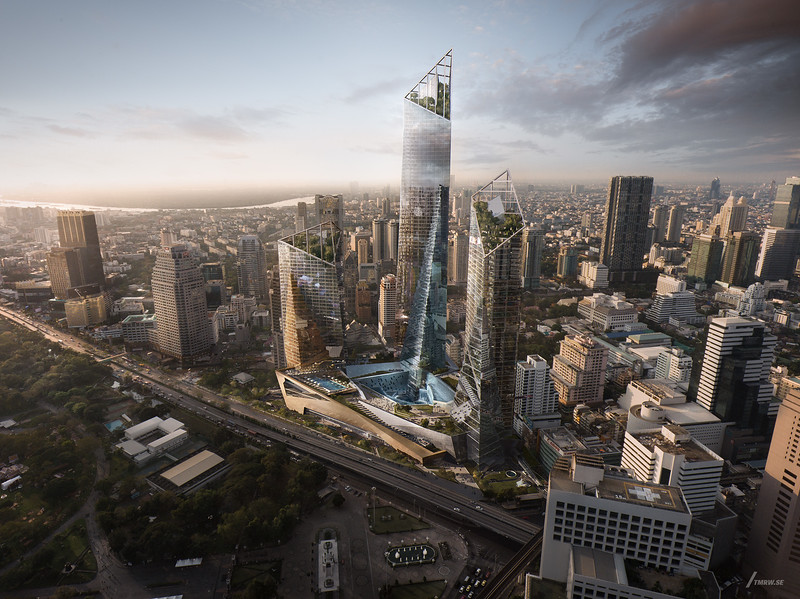 Dusit Central Park is a mixed-use development featuring three towers of 78, 46, and 40 storeys. Work is also progressing at a fast pace here, so Lumphini Park will soon be surrounded by towers on two sides.

The easiest vantage place I could find was by passing on the Silom BTS. You can see the basement area completed with one tower under construction. The greenery to the left is Lumphini Park, and the buildings in the distance on the left are One Bangkok.

Dusit Central Park is on the site of the old Dusit Thani Hotel. This was a modernist masterpiece, but apparently not historic enough to save. 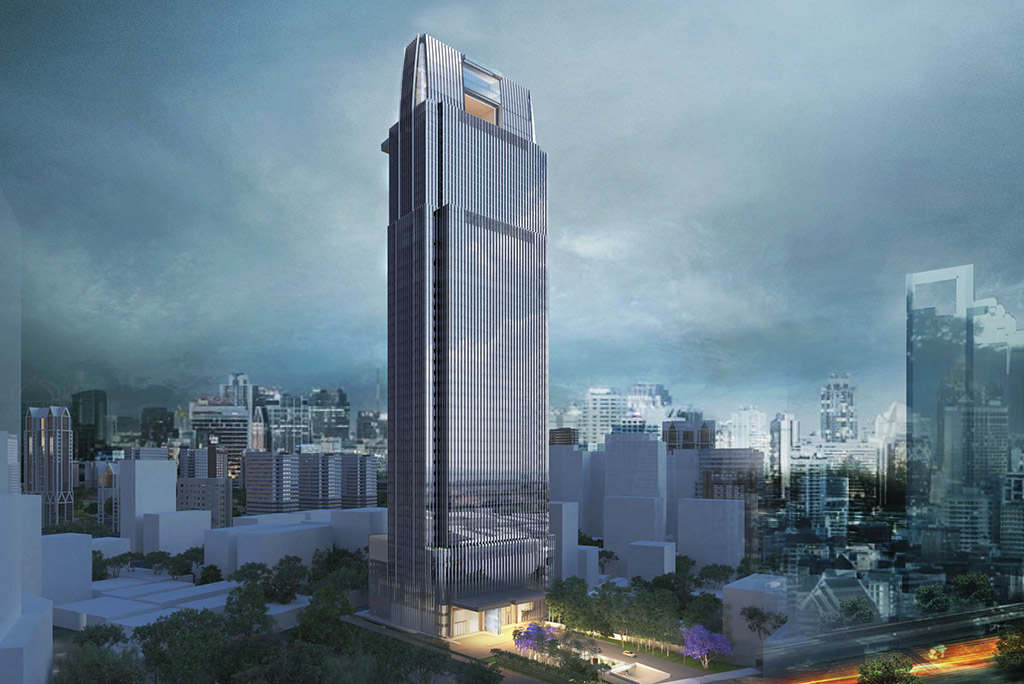 10th Avenue is a mixed-use development featuring office, hotel and retail space. The tower (54 floors/230 metres) includes The Edition Hotel Bangkok and it will have an observation deck and “Bangkok’s largest infinity pool”. 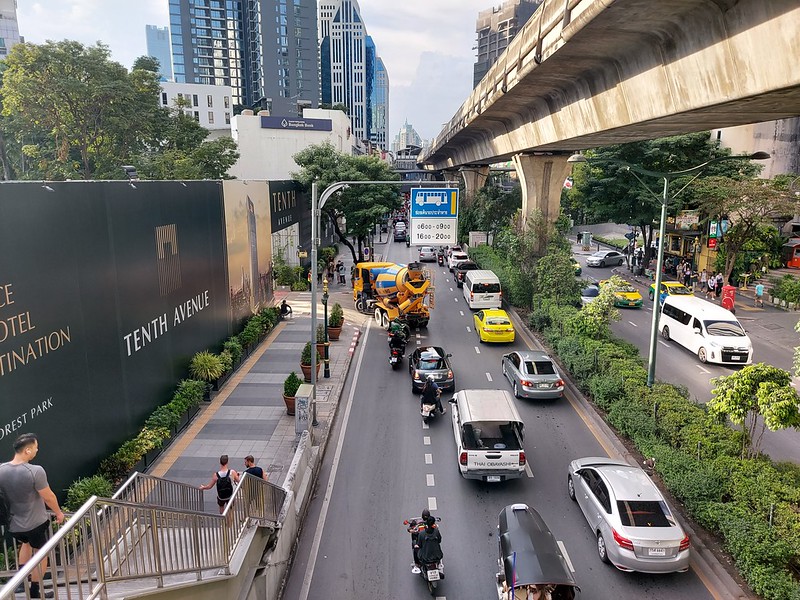 10th Avenue gets its name from being on the corner of Soi 10 on Sukhumvit Road. 10th Avenue makes it sound more like a grand New York building than “10th Soi” would.

This project is notable for being built on the site of the former Chuvit Garden, named after the massage parlour magnate who owned the land. Even though the park was open to the public for a while, it was not a public park. This park was a parked asset (so to speak), a land bank that was waiting to be developed.

[Chuvit Garden, closed to the public in December 2021.]

Before it was a park the block was filled with bars and shops that were illegally demolished by Chuwit Kamolvisit, which earned him a month in prison. 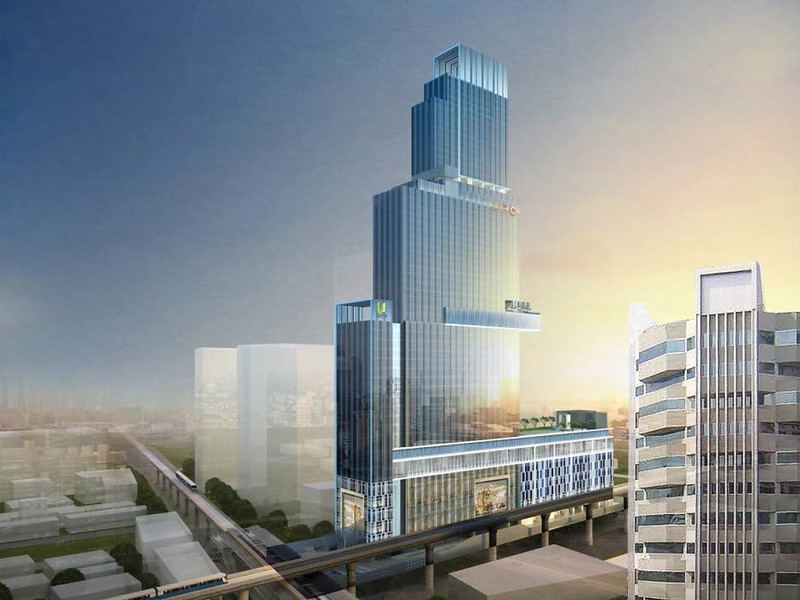 The Unicorn is an office tower that includes the Eastin Grand Hotel. The building is almost finished, and it looks completed from a distance. 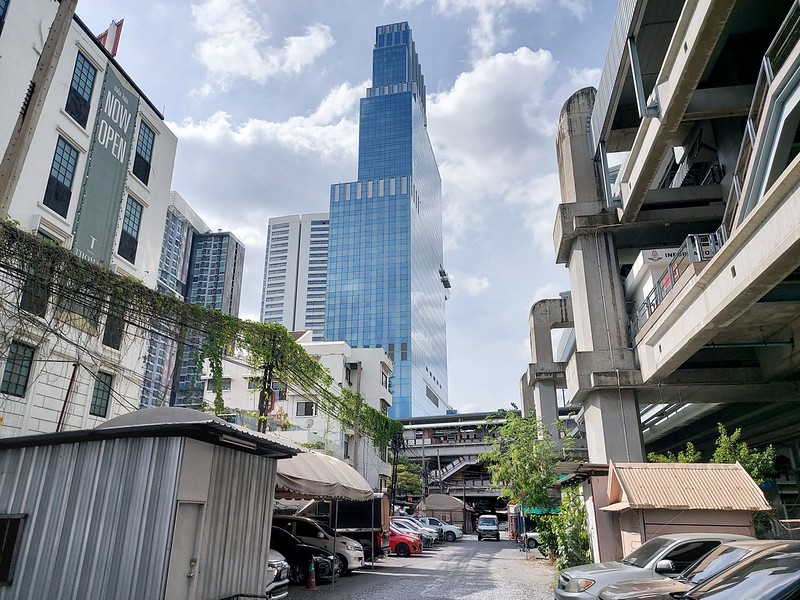 [Unicorn Phayathai viewed from next to Phayathai Airport Rail Link.]

Workers were landscaping the front entrance when I visited.

There is also a direct pedestrian walkway to Phaya Thai BTS and the Airport Rail Link being built. This station will eventually be connected to the 3-Airport High-speed Railway, so the hotel will be a strategic location for business (as they say in the real estate sales blurb).

[Workers finishing the walkway from Phayathai BTS to Unicorn Phayathai.]

Park Silom is a 38-storey, 204-metre high mixed-use commercial/office tower. This is arguably the most strategic location in Silom (to use that phrase again) as it is next to Sala Daeng BTS and the useful crossroad of Convent Road.

The tower is almost complete, and for such a prime location this is turning out to be an unremarkable blue glass box tower. 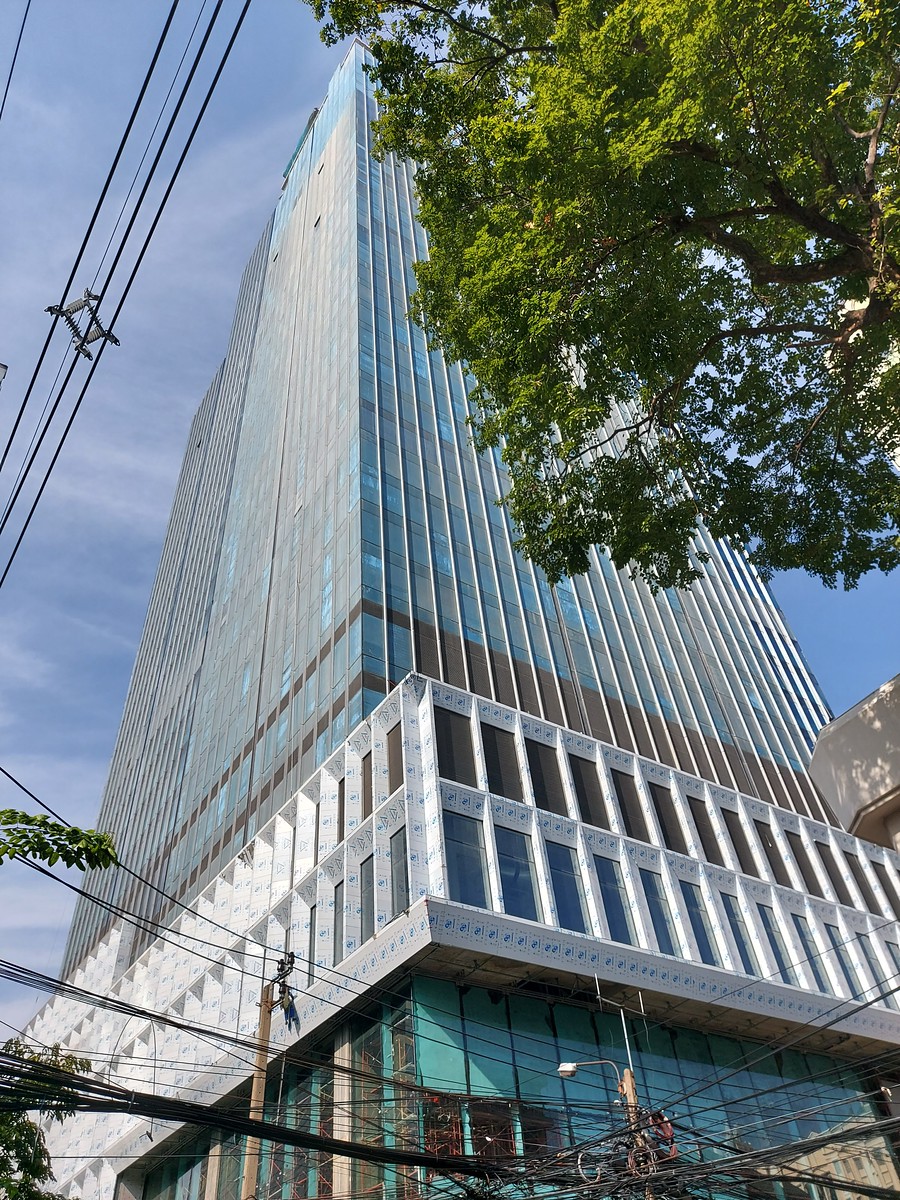 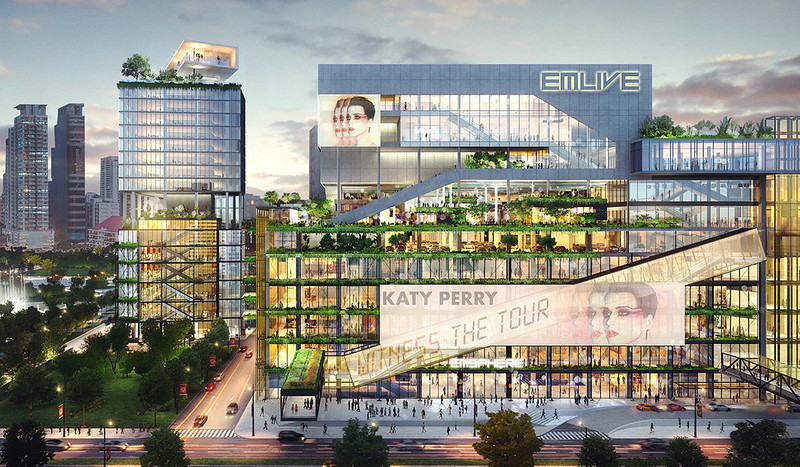 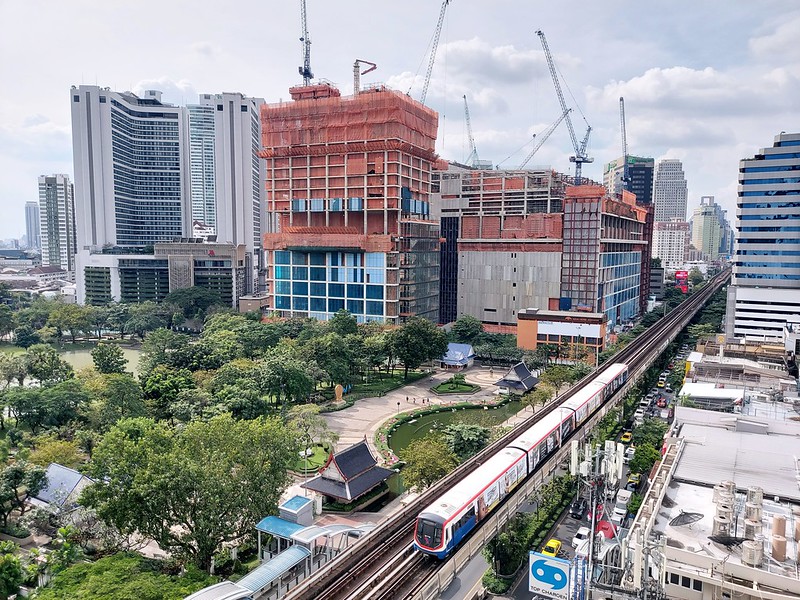 A new image at the construction site has been added since my last visit. This cut-away graphic shows how complex this entertainment complex will be. I read last year that there will be an entertainment venue on the roof that can hold 6000 people. Now that I reread that again, that is a lot of people that will be disgorging themselves onto Sukhumvit Road after a concert. I would assume that it is fully sound-proofed as well.

The Benchasiri Alliance Hotel project is on the vacant block of land next to EmSphere. 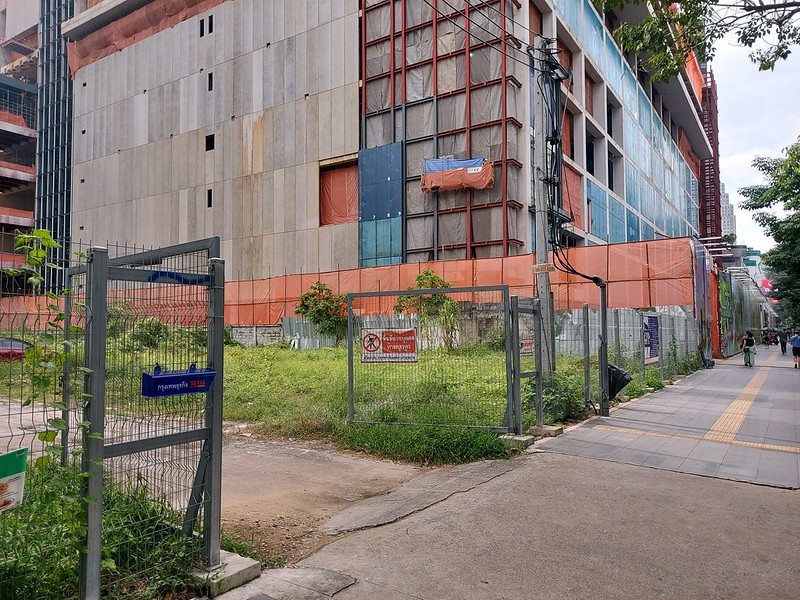 There haven’t been any updates on this, but at the EmSphere work site, there is an image of what the hotel might look like next to EmSphere. 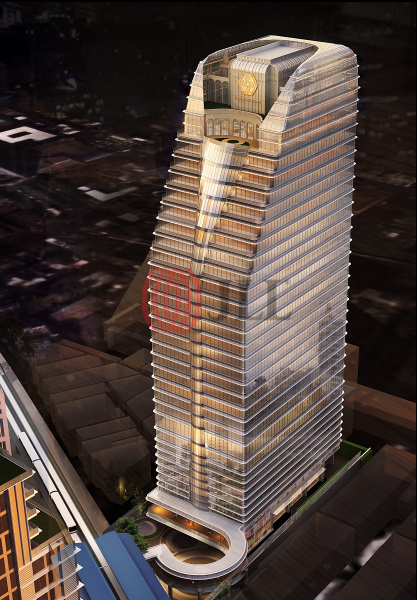 One City Center (OCC) is a 50 storey/264-metre office tower near Ploenchit BTS station. 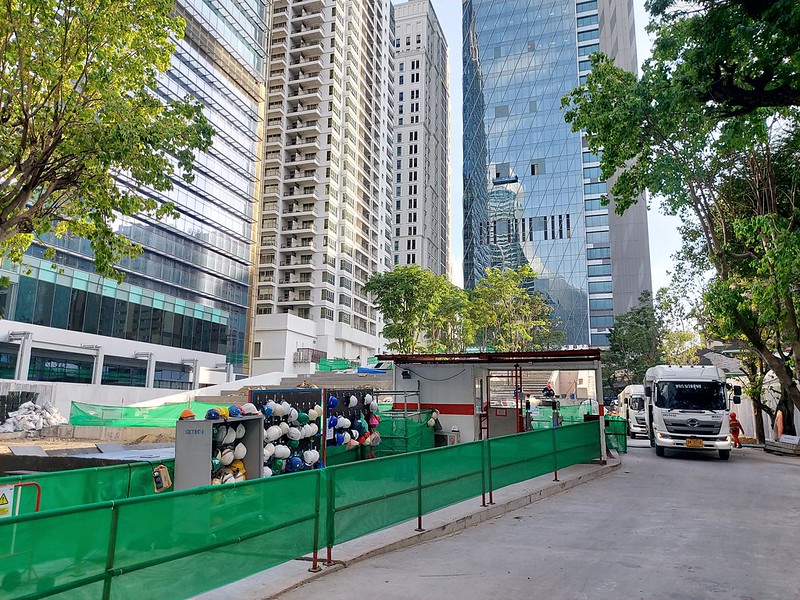 Hotel Forza Bangkok Sukhumvit is a 28-storey (105-metre) hotel development on Sukhumvit 29. This time last year there was activity on the site. Now it is completely empty. 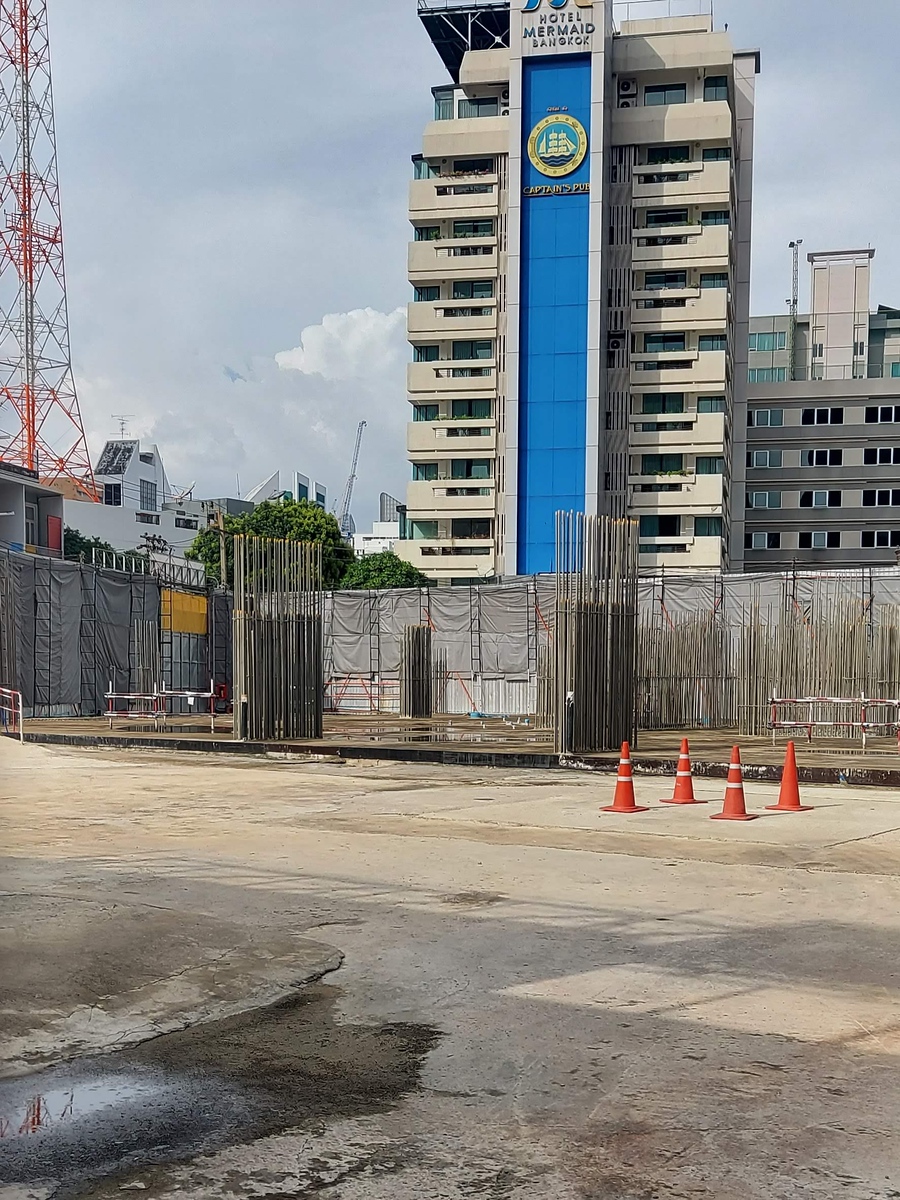 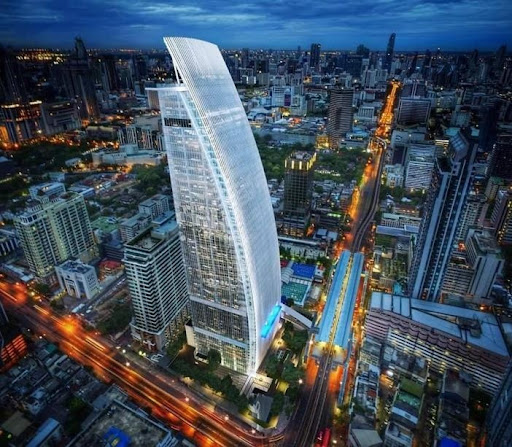 [Summit Tower next to Ratchathewi BTS.]

Central Embassy Extension has not started yet. This was the site of the old British Embassy, which was sold for £420m. 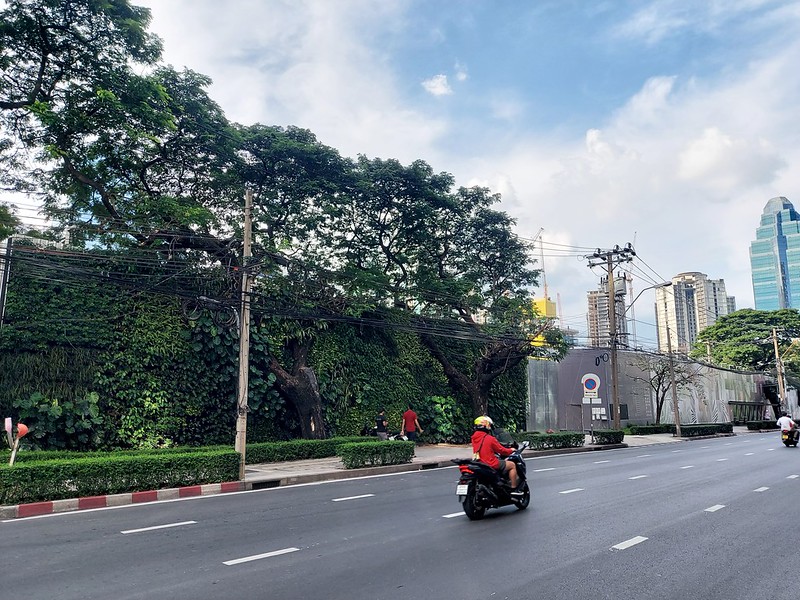 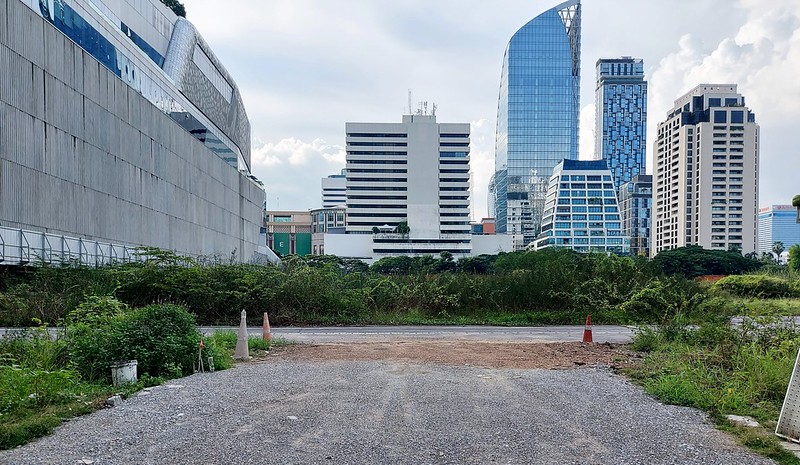 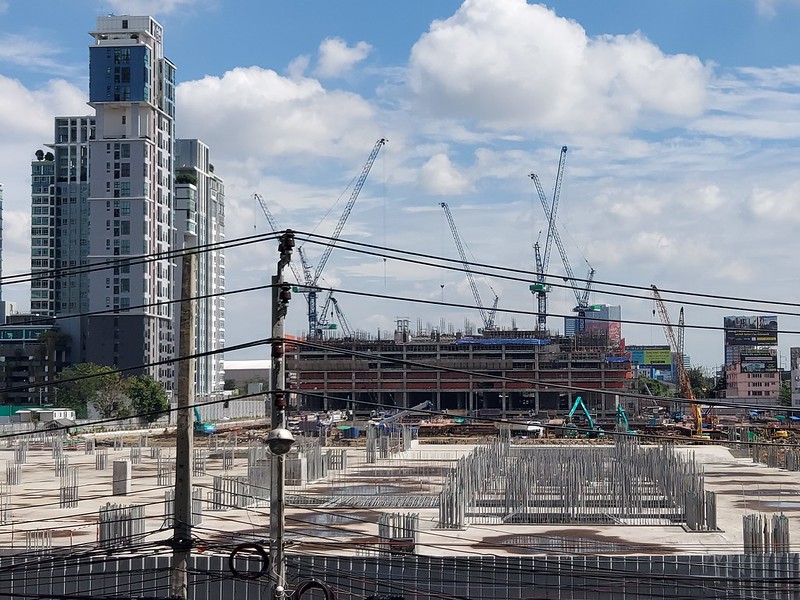 Unlike the other big malls around Siam and lower Sukhumvit, Bangkok Mall is not next to a BTS Station but halfway between two (Udom Suk and Bang Na). It took me about 5 minutes to walk from Udom Suk to the Sukhumvit Road entrance of the construction site along an elevated walkway underneath the BTS line. 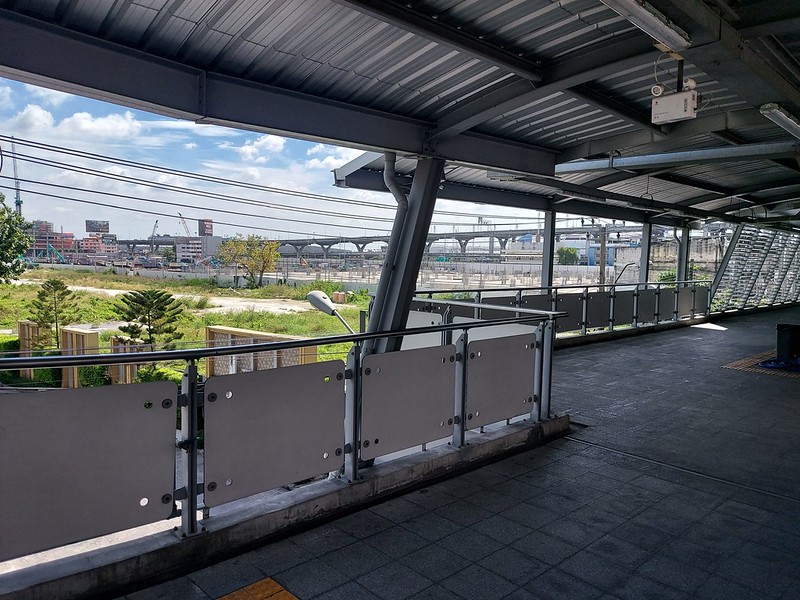 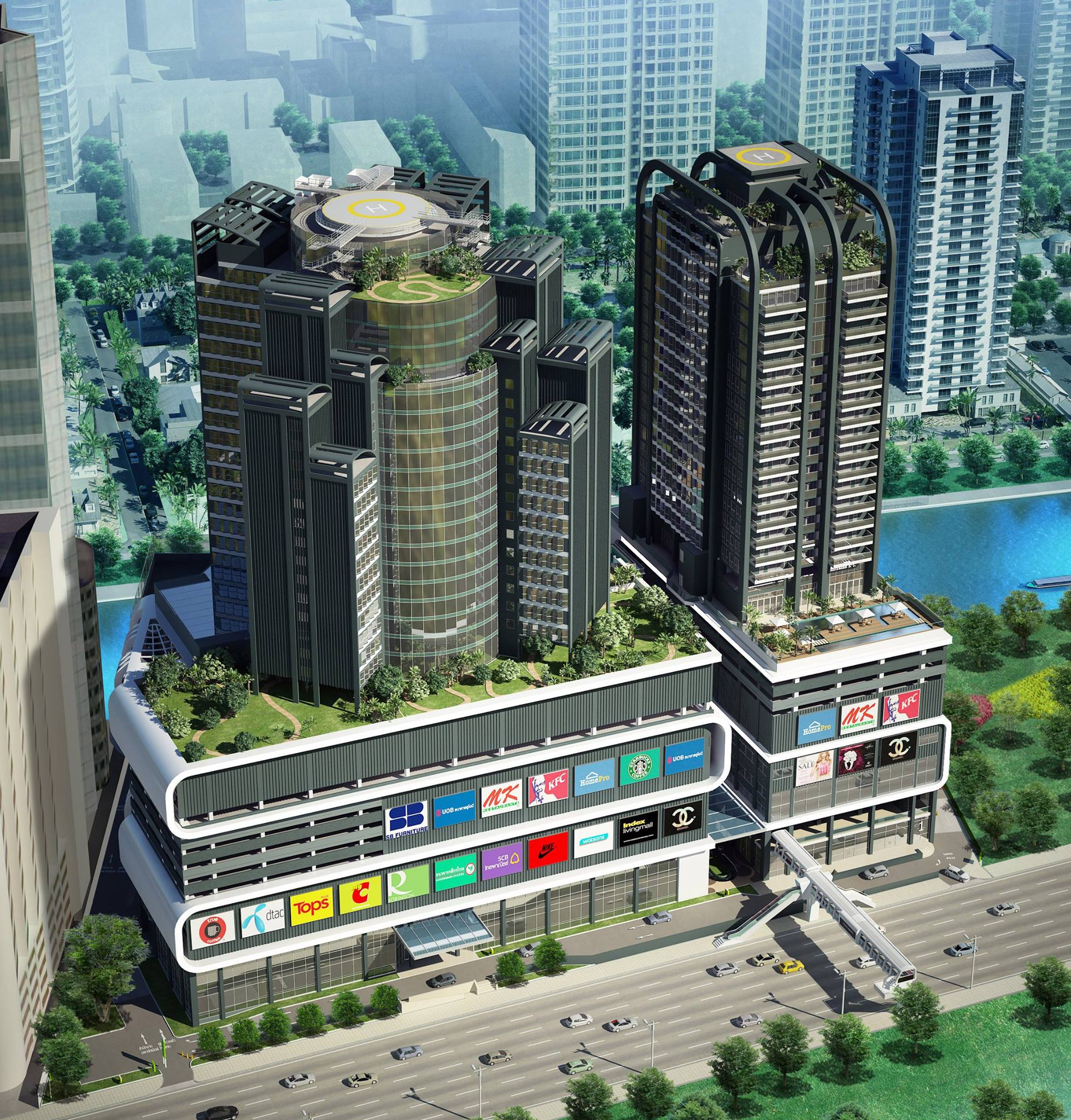 Smile Square is a mall and hotel project on Phetchaburi Road. The project has stalled with no sign of restarting. 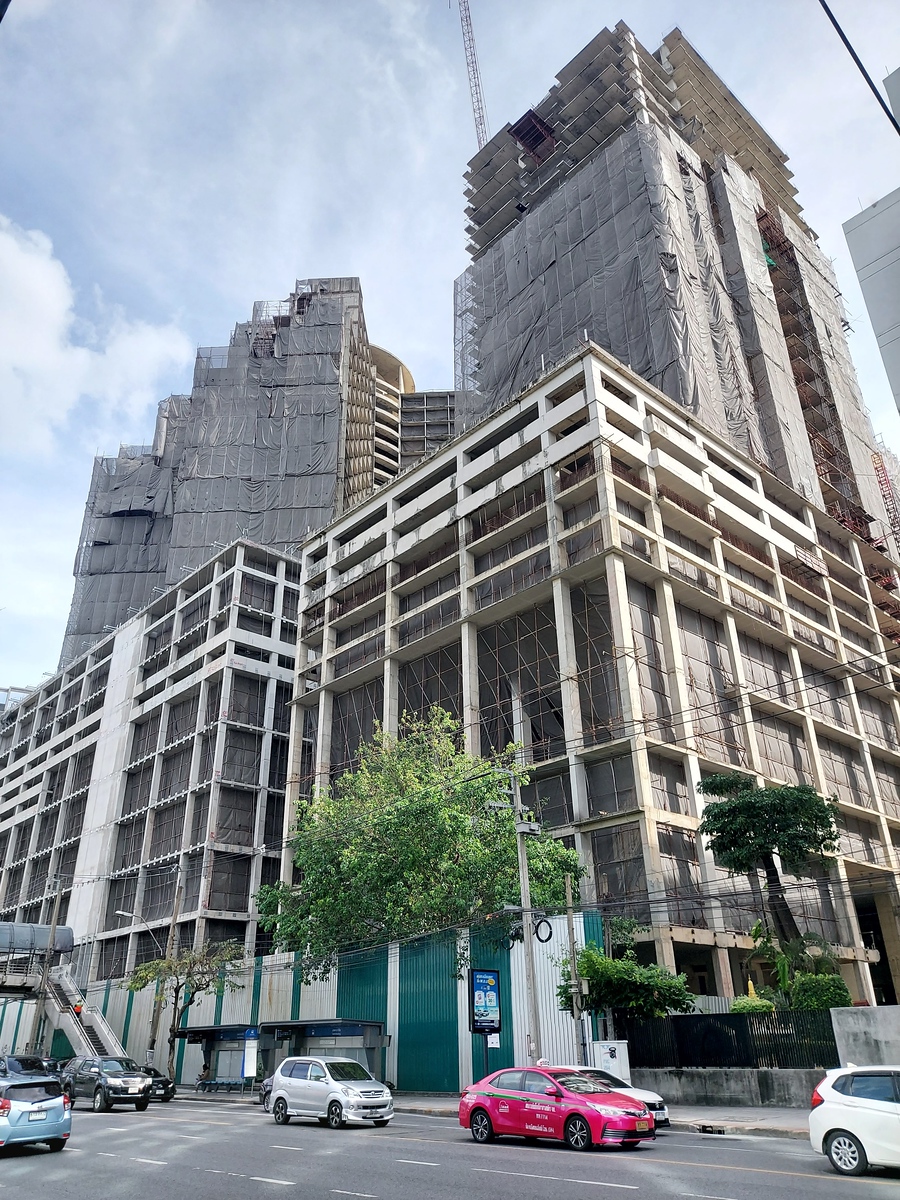 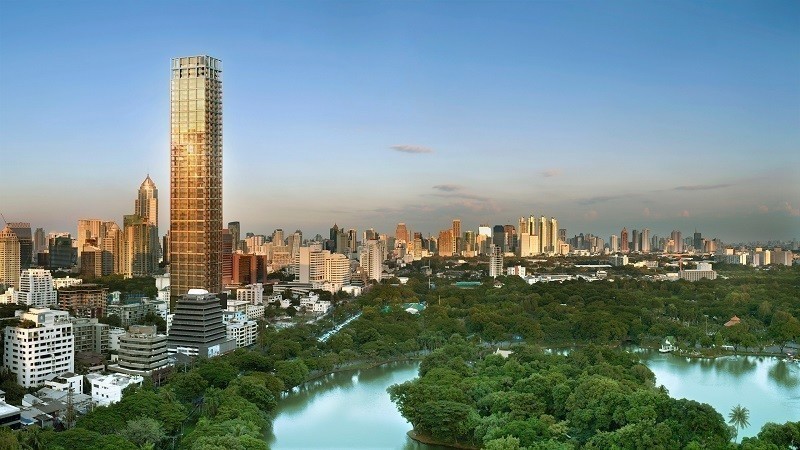 Nimit Langsuan is a “super-luxury” residential development in Lumphini. The 210-metre, 54-floor tower is on the northern side of Lumphini Park.

The last update in 2020 said the developer is in bankruptcy court, so it has been casting a ghostly shadow over Lumphini Park for 2 years now.

Speaking of ghost towers, the Sathorn Unique tower continues to haunt the Bangkok skyline. I take a picture of it every year, and it is currently time-stamped with advertising for the iPhone 14 and Avatar 2.

I don’t usually feature stalled or abandoned projects here unless there has been some notable news, otherwise the page will be filled with concrete carcasses from around the city. I mention Sathorn Unique because 2022 was the 25th anniversary of the Asian Financial Crisis, which is when construction at Sathorn Unique ground to a halt. There are now fully-grown Bangkok adults who have never known Bangkok without the Ghost Tower.

Here is the 2021 construction update for Bangkok.